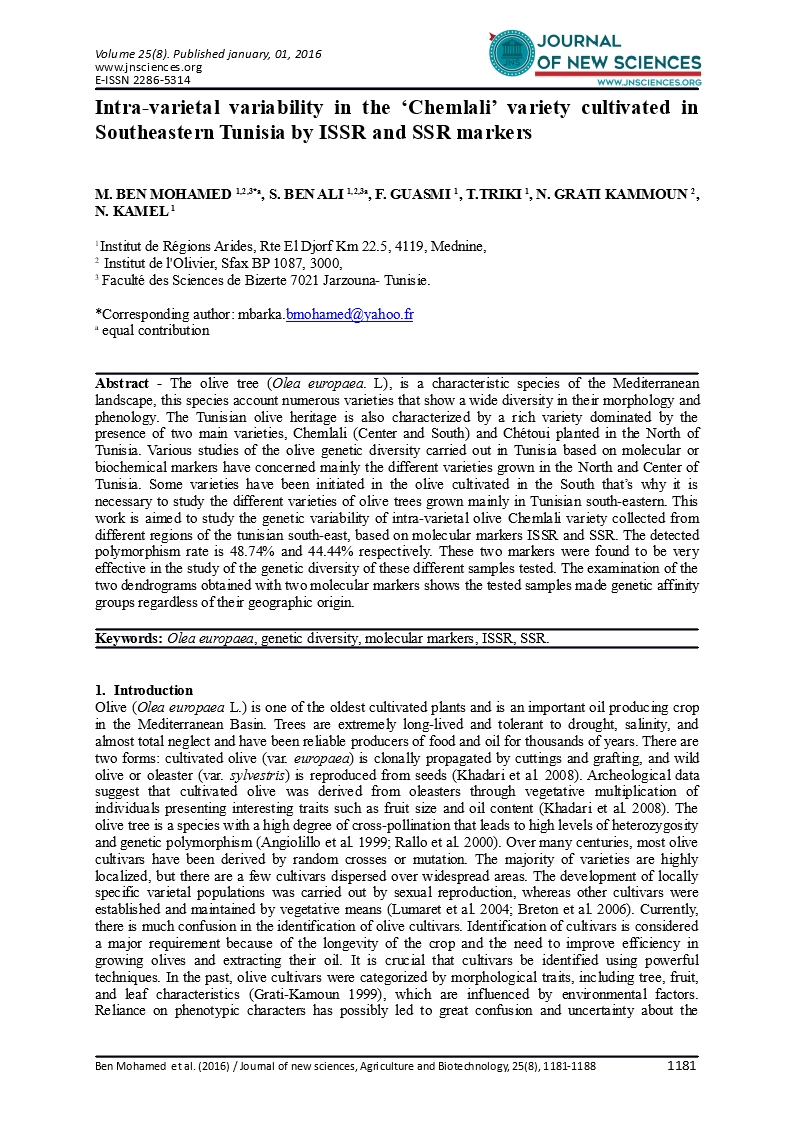 Abstract - The olive tree (Olea europaea. L), is a characteristic species of the Mediterranean landscape, this species account numerous varieties that show a wide diversity in their morphology and phenology. The Tunisian olive heritage is also characterized by a rich variety dominated by the presence of two main varieties, Chemlali (Center and South) and Chétoui planted in the North of Tunisia. Various studies of the olive genetic diversity carried out in Tunisia based on molecular or biochemical markers have concerned mainly the different varieties grown in the North and Center of Tunisia. Some varieties have been initiated in the olive cultivated in the South that’s why it is necessary to study the different varieties of olive trees grown mainly in Tunisian south-eastern. This work is aimed to study the genetic variability of intra-varietal olive Chemlali variety collected from different regions of the tunisian south-east, based on molecular markers ISSR and SSR. The detected polymorphism rate is 48.74% and 44.44% respectively. These two markers were found to be very effective in the study of the genetic diversity of these different samples tested. The examination of the two dendrograms obtained with two molecular markers shows the tested samples made genetic affinity groups regardless of their geographic origin.

Olive (Olea europaea L.) is one of the oldest cultivated plants and is an important oil producing crop in the Mediterranean Basin. Trees are extremely long-lived and tolerant to drought, salinity, and almost total neglect and have been reliable producers of food and oil for thousands of years. There are two forms: cultivated olive (var. europaea) is clonally propagated by cuttings and grafting, and wild olive or oleaster (var. sylvestris) is reproduced from seeds (Khadari et al. 2008). Archeological data suggest that cultivated olive was derived from oleasters through vegetative multiplication of individuals presenting interesting traits such as fruit size and oil content (Khadari et al. 2008). The olive tree is a species with a high degree of cross-pollination that leads to high levels of heterozygosity and genetic polymorphism (Angiolillo et al. 1999; Rallo et al. 2000). Over many centuries, most olive cultivars have been derived by random crosses or mutation. The majority of varieties are highly localized, but there are a few cultivars dispersed over widespread areas. The development of locally specific varietal populations was carried out by sexual reproduction, whereas other cultivars were established and maintained by vegetative means (Lumaret et al. 2004; Breton et al. 2006). Currently, there is much confusion in the identification of olive cultivars. Identification of cultivars is considered a major requirement because of the longevity of the crop and the need to improve efficiency in growing olives and extracting their oil. It is crucial that cultivars be identified using powerful techniques. In the past, olive cultivars were categorized by morphological traits, including tree, fruit, and leaf characteristics (Grati-Kamoun 1999), which are influenced by environmental factors. Reliance on phenotypic characters has possibly led to great confusion and uncertainty about the current classification of olive varieties in many countries. Recently, molecular techniques based on DNA markers have been shown to provide powerful tools for genetic analysis of olive cultivars (Belaj et al. 2001; Busconi et al. 2003; Pafundo et al. 2005). Among these markers, microsatellites (SSR) have become the most popular in many species (Qin et al. 2012; Guo et al. 2012), and in olive cultivars they have a high potential for resolving issues of synonymies, homonymies, and misnamings (Taamalli et al. 2006; Rekik et al. 2008; Muzzalupo et al. 2009).

Molecular analysis was performed Twelve Tunisian olive accessions all belonging to the variety ‘Chemlali’, olive trees were selected from different geographical regions of the South-East Tunisian.

The ‘Chemlali’ accessions analyzed and their origins are reported in Table 1.

Total genomic DNA was extracted from young leaves using the CTAB method according to the protocol of Rekik et al. (2008). DNA so prepared was further purified and resuspended in Tris-EDTA of pH 8.0. The quantity of the DNA was as­sessed by and the quality by 2 % agarose gel electrophoresis.

The same DNA samples analyzed by ISSR (A1, A2 and A3) were also analyzed using SSR markers. SSR analysis was performed according to Bornet and Branchard (2001) using 3 primers. These markers were selected for their high polymorphism in many olive cultivars (Lumaret et al. 2004) and in tunisian cultivars (Grati-Kamoun et al. 2006).

Polymorphic bands were recorded into a data matrix of presence (1) and absence (0) of bands. This data matrix obtained by scoring the ISSR and SSR profiles both individually as well as collectively were subjected to the calculation of a similarity matrix (S) using Jaccard’s coefficients (Jaccard, 1908). Several parameters were considered in this study: The polymorphic bands percentage (PBP), the resolving power (RP) was calculated for each primer according to Backus and Gilbert (1968): RP= ∑ Ib; Ib= 1-(2|0.5-p|); where p: is the proportion of species containing I bands. Genetic relationships among cultivars are represented by a dendrogram based on the distances calculated from the Jaccard index. The dendrogram was constructed using the Unweight Pair Group Method using an Arithmetic average (UPGMA).

The analyses of the amplification profiles obtained for each primer are summarized in Table 2.

3.2. Patterns of genetic diversity based on ISSR

Each polymorphic band was recorded into a data matrix of presence (1) and absence (0) of band. This data matrix was converted into a Similarity matrix (S) using Jaccard coefficient (Jaccard, 1908), and the establishment of dendrogram (Figure 2) by unweighted pair group method using an arithmetic average cluster analysis. The similarity degree between the 12 olive accessions based on ISSR markers ranged from 0 to 0.882. This result shows the high degree of intervarietal genetic diversity at ‘Chemlali’ variety. The smallest genetic distance value of 0.2 was observed between ' Chemlali Djerba' and 'Chemlali Douiret' as well as 'Chemlali Dakhla' and 'Chemlali-el Alea'. The maximum genetic distance (Dg>0.8) was found between different combinations:

It should be noted that 'Chemlali IRA Médenine' has the largest genetic distances with relatively all accessions.

The (S) matrix of ISSR markers allowed the distinction of the 12 tunisian olive accessions and was used to generate a dendrogram (Figure 2). The dendrogram depicts the pattern of relationships between the studied accessions. There is no clear clustering of accessions in relation with their growing area. Nevertheless, four clusters can be defined.

* Group4 contains only «Chemlali IRA Medenine» characterized by high genetic distance with the rest of studied accessions (0.687 and 0.846).

The analyses of the amplification profiles obtained for each primer are summarized in Table 3.

Seven different bands were obtained using 3 primers from which 4 were polymorphic with 44.44% polymorphism rate. The molecular size of obtained bands ranged from 150 to 700 bp. The primers OUB.2 and GAPU.47 showed 2 polymorphic bands while UDO.004 showed a monomorphic pattern.

Affinities among cultivars and accessions are shown in the dendrogram (Figure 3), forming three groups. The first group represented by 10 accessions «Chemlali Abyath, Chemlali Douiret, Chemlali Ontha, Chemlali Djerba, Chemlali Zarzis, Chemlali el Gorthab,Chemlali Drina, Chemlali el Alea, Chemlali Dakhla, Chemlali IRA Médenine». The similarity percentage between these accessions is very important (100%). The second group included only the cultivar «Chemlali Matmata». The third main group included the cultivar «Chemlali Ben Guerdane». This extra group characterized by the most important genetic distances over than 0.75 with other cultivars. The geographical origin of cultivars has no influence on the groupings obtained. The studied cultivars constitute different groups have a genetic affinities regardless of their geographic origin.