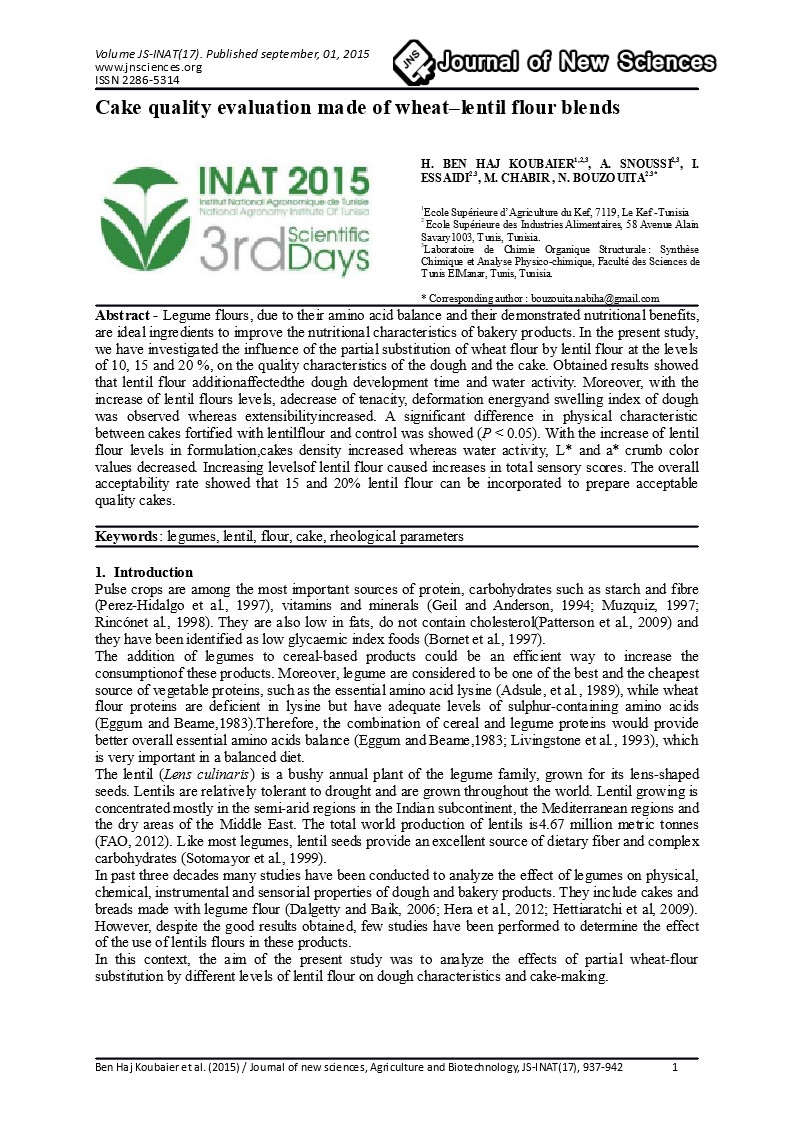 Abstract - Legume flours, due to their amino acid balance and their demonstrated nutritional benefits, are ideal ingredients to improve the nutritional characteristics of bakery products. In the present study, we have investigated the influence of the partial substitution of wheat flour by lentil flour at the levels of 10, 15 and 20 %, on the quality characteristics of the dough and the cake. Obtained results showed that lentil flour additionaffectedthe dough development time and water activity. Moreover, with the increase of lentil flours levels, adecrease of tenacity, deformation energyand swelling index of dough was observed whereas extensibilityincreased. A significant difference in physical characteristic between cakes fortified with lentilflour and control was showed (P < 0.05). With the increase of lentil flour levels in formulation,cakes density increased whereas water activity, L* and a* crumb color values decreased. Increasing levelsof lentil flour caused increases in total sensory scores. The overall acceptability rate showed that 15 and 20% lentil flour can be incorporated to prepare acceptable quality cakes.

Pulse crops are among the most important sources of protein, carbohydrates such as starch and fibre (Perez-Hidalgo et al., 1997), vitamins and minerals (Geil and Anderson, 1994; Muzquiz, 1997; Rincónet al., 1998). They are also low in fats, do not contain cholesterol(Patterson et al., 2009) and they have been identified as low glycaemic index foods (Bornet et al., 1997).

The addition of legumes to cereal-based products could be an efficient way to increase the consumptionof these products. Moreover, legume are considered to be one of the best and the cheapest source of vegetable proteins, such as the essential amino acid lysine (Adsule, et al., 1989), while wheat flour proteins are deficient in lysine but have adequate levels of sulphur-containing amino acids (Eggum and Beame,1983).Therefore, the combination of cereal and legume proteins would provide better overall essential amino acids balance (Eggum and Beame,1983; Livingstone et al., 1993), which is very important in a balanced diet.

The lentil (Lens culinaris) is a bushy annual plant of the legume family, grown for its lens-shaped seeds. Lentils are relatively tolerant to drought and are grown throughout the world. Lentil growing is concentrated mostly in the semi-arid regions in the Indian subcontinent, the Mediterranean regions and the dry areas of the Middle East. The total world production of lentils is4.67 million metric tonnes (FAO, 2012). Like most legumes, lentil seeds provide an excellent source of dietary fiber and complex carbohydrates (Sotomayor et al., 1999).

In past three decades many studies have been conducted to analyze the effect of legumes on physical, chemical, instrumental and sensorial properties of dough and bakery products. They include cakes and breads made with legume flour (Dalgetty and Baik, 2006; Hera et al., 2012; Hettiaratchi et al, 2009). However, despite the good results obtained, few studies have been performed to determine the effect of the use of lentils flours in these products.

In this context, the aim of the present study was to analyze the effects of partial wheat-flour substitution by different levels of lentil flour on dough characteristics and cake-making.

Cakewasprepared from blends containing 0%, 10%, 15% and 20% of lentil flour according a homemade cake recipe(Table 1).Cake batter was prepared in a kitchenAid professional mixer (KPM5), wherein, the flour, milk powder baking powder, and water were creamed together to get a fluffy cream; eggs and sugar were whipped together until semi-firm foam resulted. The sugar–egg foam was mixed with the creamed flour and emulsifier, after which the vegetable oil was added in small portions. Cake batter was poured into a wooden pan and baked at 160 ◦C for 1 h. Cakes were cooled to room temperature.

Batter density was determined with a measuring cylinder and expressed as the relation between the weight of batter and the same volume of distilled water.

The Farinograph and alveograph parameters measured are given in Table 3.The DDT represents the time required by the dough to reach maximum consistency after the first addition of water. It indicates the minimum mixing time for dough formation. Inclusion of LF showed insignificant effect between 4.65 to 4.78 minute, but the overall DDT slightly raised by the increase of LF that is in accordance to Fu et al. (2008). The increase in DDT could be explained by interactions between the non-wheat proteins and gluten leading to a delay in the hydration and development of gluten in the presence of these ingredients (Dhinda et al., 2012). Water absorptionis the amount of water needed to obtain dough of a defined consistency and is largely related to the dough yield. It was found that increasing the addition of LF to WF increased WA from 55.20 % (control) to 70.20 % (flour blended with 20% of LF). Similar effects on WA were observed by Bojňanska et al. (2012), Eissa et al. (2007), Fenn et al. (2010), Kamaljit et al. (2010), and Mohammed et al. (2012) when the various legume flours were added to wheat flour. The WA is expected to rise because addition of LF increases the amount of proteins, starch and fibers; these components compete for absorption of water during dough formulation(Dhinda et al., 2012; Gimenez et al., 2012). Alveographic parameters reveal the dough rheology and predict the quality of the final baked products (Mirsaeedghazi et al., 2008). The parameters include work of the doughor the deformation energy showing the baking strength (W), G (mm) the swelling index is a measure of square root of volume of air needed to inflate the bubble till it ruptures, P (mm) is the maximum pressure for tenacity or pressure required to below the dough bubble, which is taken as resistance to extension, that is a measure of the resistance to deformation, L represents extensibility in mm, P/L is the curve configuration ratio showing stability which is an index of gluten performance or dough behavior in mixing and baking. The elasticity of the dough is directly related to protein/gluten network and is more closely related to glutenin macro polymers which, since weak, decrease elastic property (Agyare et al., 2005). The alveographic results showed that W-value slightly increases from 143 to 159 upto 20% addition of LF. This increase could be due to the high contentin fiber and proteins of LFwhich allow more water interactions through hydrogen bonding as was previously found by Rosell et al. (2001). Pressure to blow the bubble (P), extensibility (L) and swelling index (G) decrease rapidly by the addition of Lentil flour from 10 %. As resulting of the lentil action on both dough resistance and dough extensibility, P/L ratio was augmented in dough containing 10% LF (4.56 vs 3.93 in the control), then decreased upto 20%. The addition of 15% LF shows a P/L ratio about 3.90 as found in the control. Our findings are in line withthe observations made by Seema et al. (2012)whoreported a decrease on elasticity and an increase on resistance toextension of dough prepared by incorporating lentil flour in the cookies formulation.

Physical properties of cake are presented in Table 5.According to results, cake volume decreased as the LF percentage increased. During the baking process, baking powder generates gases, which should be retained in order to guarantee good cake volume, and in that respect flour quality has an important role to play. LF also presented higher protein content, and different amino acid composition than WF which could affect cake characteristics, especially volume (Mohamed and Hamid, 1998). As for cake weight, no significant differences were found. Therefore, the water retention capacity was not affected by the substitution of WF by LF.

The addition of lentil flour reduced L* and increased a* crumb values, indicating less white and more reddish crumb. The temperature reached inside the cakes does not exceed 100 °C, meaning that Maillard and caramelization reactions do not occur and the colors observed in the crumb therefore correspond mainly to the colours of the ingredients used in the formula. Differences in crumb color have also been detected in other studies in which legume flour, with different color from wheat flour, was incorporated (Gómez et al., 2008). In contrast to what occurs in the crumb, the cake crust temperature exceeds 150°C during baking, and thus Maillard and sugar caramelization reactions take place and are responsible for the final crust color (Purlis, 2010). In this case, despite the fact that lentil flours have different amino acid and sugar contents from wheat flour, no significant differences in color were observed. There was only a tendency to a fall in the b* value.

The results obtained in sensory analysis of cakes added with different concentrations of LFwere presented in Fig.1. LF supplementation in WF hada significant impact (P<0.05) on texture and overall acceptability, evaluated when compared to the cake prepared with WF. Indeed, with the increase in the level of LF in formulation, the sensory scores for texture of cakes decreased. The samples added with 15 and 20% of LF had maximum overall acceptability. The overall acceptability score for these samples were 4.23 and 4.19, respectively, on a 5-point hedonic scale. However the addition of LF to wheat flour did not influence the acceptance of the color, odor and taste.

This study showed that it is possible to incorporate lentil flour into cake formulations, increasing the nutritionalvalue. The addition of lentil flour to wheat flour modified significantlythe farinographic and alveographic parameters of the dough. It was noted that addition of lentil flour reduced physical properties (volume and color L and b*) of cake.Sensory evaluation of the final products revealed that wheat–lentil cake prepared with blended flour containing 15 and 20% of lentil flour were deemed to be the most acceptable.