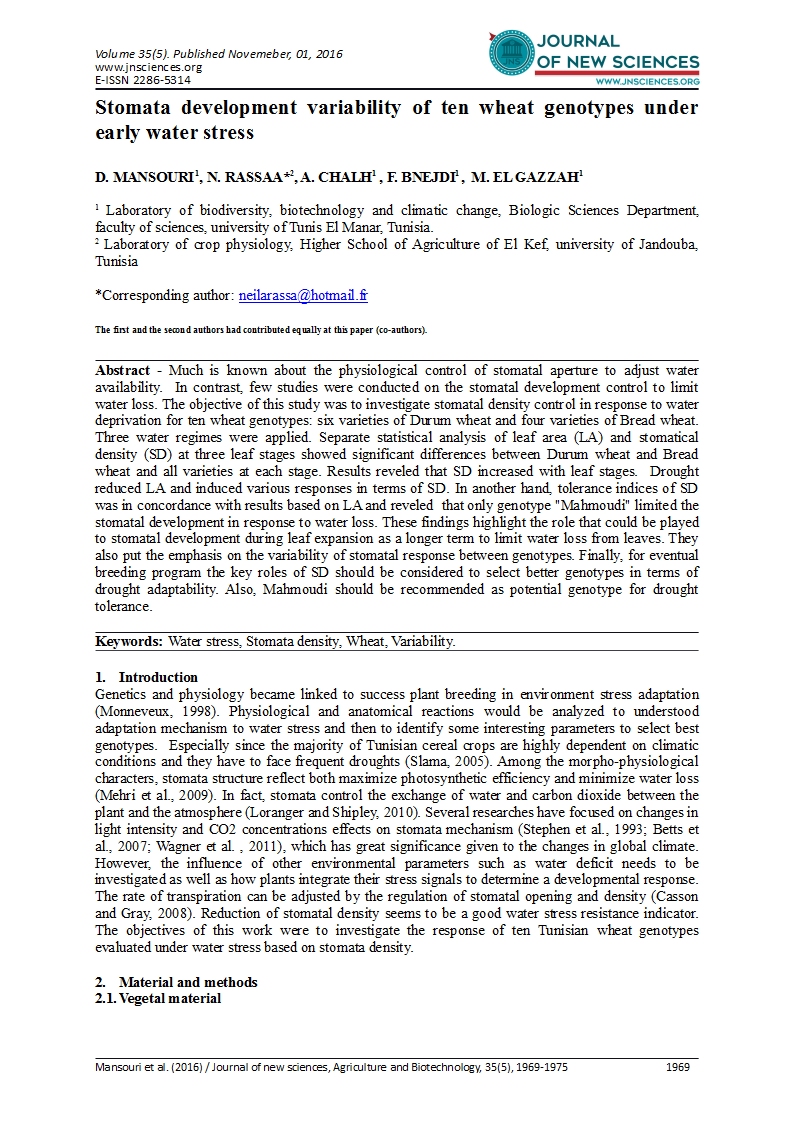 Abstract - Much is known about the physiological control of stomatal aperture to adjust water availability. In contrast, few studies were conducted on the stomatal development control to limit water loss. The objective of this study was to investigate stomatal density control in response to water deprivation for ten wheat genotypes: six varieties of Durum wheat and four varieties of Bread wheat. Three water regimes were applied. Separate statistical analysis of leaf area (LA) and stomatical density (SD) at three leaf stages showed significant differences between Durum wheat and Bread wheat and all varieties at each stage. Results reveled that SD increased with leaf stages. Drought reduced LA and induced various responses in terms of SD. In another hand, tolerance indices of SD was in concordance with results based on LA and reveled that only genotype "Mahmoudi" limited the stomatal development in response to water loss. These findings highlight the role that could be played to stomatal development during leaf expansion as a longer term to limit water loss from leaves. They also put the emphasis on the variability of stomatal response between genotypes. Finally, for eventual breeding program the key roles of SD should be considered to select better genotypes in terms of drought adaptability. Also, Mahmoudi should be recommended as potential genotype for drought tolerance.

Genetics and physiology became linked to success plant breeding in environment stress adaptation (Monneveux, 1998). Physiological and anatomical reactions would be analyzed to understood adaptation mechanism to water stress and then to identify some interesting parameters to select best genotypes. Especially since the majority of Tunisian cereal crops are highly dependent on climatic conditions and they have to face frequent droughts (Slama, 2005). Among the morpho-physiological characters, stomata structure reflect both maximize photosynthetic efficiency and minimize water loss (Mehri et al., 2009). In fact, stomata control the exchange of water and carbon dioxide between the plant and the atmosphere (Loranger and Shipley, 2010). Several researches have focused on changes in light intensity and CO2 concentrations effects on stomata mechanism (Stephen et al., 1993; Betts et al., 2007; Wagner et al. , 2011), which has great significance given to the changes in global climate. However, the influence of other environmental parameters such as water deficit needs to be investigated as well as how plants integrate their stress signals to determine a developmental response. The rate of transpiration can be adjusted by the regulation of stomatal opening and density (Casson and Gray, 2008). Reduction of stomatal density seems to be a good water stress resistance indicator. The objectives of this work were to investigate the response of ten Tunisian wheat genotypes evaluated under water stress based on stomata density.

The experiment was taken under glasshouse and three water regimes were installed. The soil water content was maintained at 100% (T1), 50% (T2) and 30% (T3) of substrate water capacity. Pots have been weighed every 2 days in the morning, and water has been added until the initial weight of the pots was reached for each treatment. Treatments were applied between 2–3 and 6 leaf stages (48 days).

Stomata density was calculated by optical microscopic observations performed on epidermic impressions found on a tape colorless. The method is to apply a coat of transparent polish over leaf area of almost 2 cm 2. Once the varnish has become dry, clear tape is glued on top, then removed and placed on a microscope slide for observation. Three replications were carried out on both sides of wheat leaves and that for control plants and stressed plants. Given that counting the number of stomata per surface was done, microscope observation had a magnification equal to 400 times (40 x 10). Similarly, the leaf area on which stomata density counts were measured, was carried out using an optical planimeter.

The regular and linear array of stomata throughout the cellular structure of the epidermal leaf were observed (figure 1).

At waterfull regime, stomata density depended upon species and leaf stages. It varied on durum wheat, from 20.75 ± 2.8 to 36.1± 6 stomata /mm² at fourth and sixth leaves stages, respectively (figure2). Therefore, on bread wheat, it was slightly lower and varied from 19.6±2.8 to 30.4±6 stomata /mm² on the same leaves stages.

For severe stress, at five leaves stage the stomata density decrease for Hydra, Mahmoudi, Vaga and Jneh Khottifa. Therefore, at six leaf stage the decrease is recovered for all aforementioned genotypes at exception of Mahmoudi who maintain its decline. For the other genotypes, we register an increase of stomata density varying from 10 to 80% (figure 4).

Leaf Area ratio (T1/T0) of ten genotypes calculated at 3 leaves stages and under moderate water stress was presented at figure 5. Leaf area declined for the majority of bread wheat genotypes (Soubaa Aljia, Jneh Khouttifa, Bayadha), at exception of Mahmoudi on fifth leaf. For the other genotypes we observed an increase tendency compared to full irrigated conditions (figure 5).

Leaf area ratio (T2/T0) of ten genotypes calculated at 3 leaves stages and under severe water stress was presented at figure 6. Leaf area decreased for all autochthon genotypes (Soubaa Aljia, Jneh Khouttifa, Bayadha and Mahmoudi). In contrast, we observed an upsurge relatively to full irrigated conditions for all other genotypes at exception of Nasr (figure 6).

Moreover, leaf area index and stomata density index seems to be not correlated in despite of significant values for certain genotypes especially at leaf four stage.

Significant differences of stomata density between leaf stages were showed for the tow species and varied from 20.75±2.8 at fourth leaf to 36.1±6 stomata /mm² at sixth leaf on durum wheat. Then, it is slightly lower on bread wheat, varying from 19.6±2.8 to 30.4±6 stomata/mm² at the same leaves stages. This finding was in concordance with the results reported by Poole et al.(1996). They demonstrate that a high level of variation in stomatal characters occurs both within and between leaves. Correlations between stomatal density, epidermal cell density and stomatal index were found on tree leaves (Poole et al., 1996). Those indicate that the variation in stomatal density within leaves arose primarily from local differences in stomatal differentiation, rather than from local differences in leaf expansion. Similar results found by Araus et al. (Araus et al., 1996) concluded that complex relationship betweendifferent morpho-physiological characteristics probably control stomata conductance differences among genotypes and that these relationships differ for each different plant part.

The plant reacts differently depending on the genotypes and the intensity of stress considered. Three responses cases were registered depending upon genotypes. The improved genotypes of durum wheat (Nasr and Karim) and all bread wheat genotypes increased their stomatal densities and maintain a good leaf growth as a result of stress. Other genotypes increased their stomatal densities but they are affected in term of leaf area, it was the case of Soubaa Aljia, Jneh ElKhottifa, Bayadha. Finally, Mahmoudi was the unique genotype showing a decrease in sotomata density and leaf area.

Among the studied genotypes, Mahmoudi appears very interesting. In fact, his stomatal density decreases progressively depending upon the level of stress. It seems to be a strategic response to reduce leaf water loss and ensure a more efficient use of available water resources. These results were similar to other reported by Zhenzhu  and Guangsheng (2008) who indicate high flexibilities in stomatal density and guard cell size changing in response to water status in a perennial grass.

At normal condition, the analyses of correlation indicated a non-significant relationship between stomata density and leaf area when we consider all genotypes combined. In opposite to Loranger and Shipley (2010), who found a significant negative relationship. However, when we dissect it genotype by genotype, the aforementioned correlation and the correlation between stress tolerance indexes varied with leaf stage and stress intensity and became more frequently significant. These results indicate an intra-species variability of stomata development reaction to stress and highlight the alteration of stomatal development under water loss. These findings are in concordance with results of Hamanishi et al. (2012). Otherwise, other factors could alter this correlation; specifically, leaf dry mass per unit area (MA) and foliage density (mass per unit volume) and leaf death may also be initiated by a plant, for example in response to some phenological cue or to shading (Wright and Cannon, 2001; Wright et al., 2004).

Stomata development varied in response to water deficit. Increasingly, the intra-species variability of this parameter was emphasized: some genotypes increase stomata density, others maintain the same density and some interesting genotypes decrease it in response to water deficit. These results demonstrate that this parameter play a crucial role to distinguish tolerant genotypes and should be considered by breeder. Mahmoudi appears as a potential genotype recommended for genetic improvement of drought tolerance programs.

Special thanks to Pr. Moncef Ben Hammouda for his help.

Loranger J., Shipley B. (2010) : Interspecific covariation between stomatal density and other functional leaf traits in a local flora. Botanique, 88(1): 30-38,

Zhenzhu X. and Guangsheng Z. (2008) : Responses of leaf stomatal density to water status and its relationship with photosynthesis in a grass. Journal of Experimental Botany, Vol 59(12) :  3317-3325.