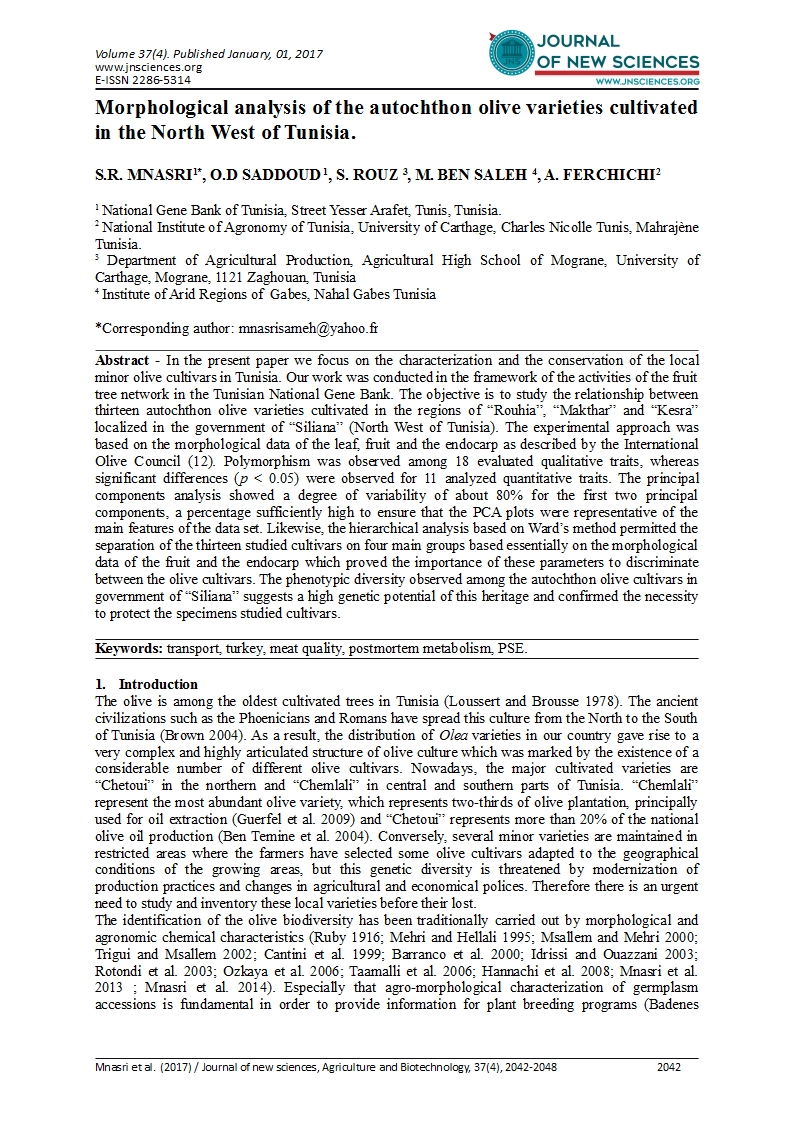 Abstract - In the present paper we focus on the characterization and the conservation of the local minor olive cultivars in Tunisia. Our work was conducted in the framework of the activities of the fruit tree network in the Tunisian National Gene Bank. The objective is to study the relationship between thirteen autochthon olive varieties cultivated in the regions of “Rouhia”, “Makthar” and “Kesra” localized in the government of “Siliana” (North West of Tunisia). The experimental approach was based on the morphological data of the leaf, fruit and the endocarp as described by the International Olive Council (12). Polymorphism was observed among 18 evaluated qualitative traits, whereas significant differences (p <0.05) were observed for 11 analyzed quantitative traits. The principal components analysis showed a degree of variability of about 80% for the first two principal components, a percentage sufficiently high to ensure that the PCA plots were representative of the main features of the data set. Likewise, the hierarchical analysis based on Ward’s method permitted the separation of the thirteen studied cultivars on four main groups based essentially on the morphological data of the fruit and the endocarp which proved the importance of these parameters to discriminate between the olive cultivars. The phenotypic diversity observed among the autochthon olive cultivars in government of “Siliana” suggests a high genetic potential of this heritage and confirmed the necessity to protect the specimens studied cultivars.

The olive is among the oldest cultivated trees in Tunisia (Loussert and Brousse 1978). The ancient civilizations such as the Phoenicians and Romans have spread this culture from the North to the South of Tunisia (Brown 2004). As a result, the distribution of Olea varieties in our country gave rise to a very complex and highly articulated structure of olive culture which was marked by the existence of a considerable number of different olive cultivars. Nowadays, the major cultivated varieties are “Chetoui” in the northern and “Chemlali” in central and southern parts of Tunisia. “Chemlali” represent the most abundant olive variety, which represents two-thirds of olive plantation, principally used for oil extraction (Guerfel et al. 2009) and “Chetoui” represents more than 20% of the national olive oil production (Ben Temine et al. 2004). Conversely, several minor varieties are maintained in restricted areas where the farmers have selected some olive cultivars adapted to the geographical conditions of the growing areas, but this genetic diversity is threatened by modernization of production practices and changes in agricultural and economical polices. Therefore there is an urgent need to study and inventory these local varieties before their lost.

Therefore, in order to reduce the loss of genetic authenticity of Tunisian olive varieties and to preserve the local genetic resources of (Olea europea L.), this work aimed to characterize the most important autochthon olive varieties localized in the North West of Tunisia and especially in the regions of “Rouhia”, “Makthar” and “Kesra” by the use of the most important morphological parameters described by the International Olive Council (IOC 1997).

An extensive field examination of autochthon olive cultivars in the governorate of “Siliana” localized in the North West of Tunisia (Figure 1) was carried out from 2012 to 2014. A total of 13 different autochthon olive varieties were considerate in this study, five cultivars from the region of Makthar (Roumi, Rajou, Meski, Neb Jmel and Tounsi), three from the region of Kesra (El Hor, Esradki and Chetoui) and five from the region of Rouhia (Chemlali, Souihli, Sayali, El Guim and Besbessi). Five trees of each cultivar were selected because, besides biometric characterization, another objective of the global project was to extract from each tree mono-varietal olive oil for characterization.

Eleven quantitative and eighteen qualitative morphological parameters (Table 1) were measured and marked from a total of 65 tagged autochthon olive accessions localized in the government of “Siliana”. Samples of the leaves, fruits and endocarps were collected from the mid-shoot portion of the current year’s growth from the most representative shoots at shoulder level (approximately 1.5 m from the ground). Forty-organ samples from the South-facing sides of trees were characterized for each parameter. All the quantitative and qualitative parameters were characterized and evaluated using the methodology of the International Olive Council (IOC 1997).

Collected data were analyzed using XLSTAT software (2010).The signification of the quantitative characters was tested by ANOVA at a significant level of P\0.05. The value of the quantitative and qualitative morphological parameters was standardized and subject to a Principal Component Analysis (PCA). The group structure of the studied varieties was also established by the use of the hierarchical analysis based on Ward’s method.

As reported in Table 2, the analyzed variables including mean value, variation coefficient and the minimum difference coefficient are highly significant at a level of P/0.05. The fruit and the endocarp weight ranged respectively from 5.61 g and 0.72 g for the cultivar “Meski “localized in the site of (Makthar) to 0.58g and 0.17g for the cultivar “Chemlali” localized in the site of (Rouhia). Thus, the varieties “Meski” and “Besbessi” which are the main table olive cultivars in our country, presented the largest fruits, while the oil varieties “Chemlali”, “Souihli” and “El Hor” was characterized by the smallest fruits. The eight rest varieties, which presented olives with medium fruit weight, are mainly exploited for olive oil production but they were also used for canning. The studied varieties revealed also difference in the leaf characteristics. The cultivars ‘Roumi”, “Besbessi”, “Meski” and “El Hor” presented the highest leaf length and the smaller length was with the cultivar “Souihli”. The highest leaf width was with the cultivars “Meski”, “Neb Jmel”, “Tounsi” and “Sradki”, while the smallest width was with the varieties “Souihli” and “El Hor”. Our results consistent with the previous study of the morphological biodiversity of the olive germoplasm in the north of Tunisia (Hannachi et al. 2008 ; Mnasri et al. 2013 ; Mnasri et al. 2014) which revealed the importance of the morphological fruit and endocarp data to discriminate between the olive varieties.

The Principal compound analysis (PCA) is generally used before the cluster analysis in order to determine the relative importance of the classification variables. This analysis was limited to the first two axes, which represent 80% of the total variance, a percentage sufficiently high to ensure that the PCA plots were representative of the main features of the data set. The first PCA axe present alone 58.26% of the total variance and it is essentially correlated to the quantitative and qualitative parameters of the fruit (weight “V7” , length “V4”, width “V5”, maximum diameter “V14”, shape “V6”, symmetry in position A “V13”, nipple presence “V17” and dimension of small lens “V19”) and the endocarp (weight “V11” , length “V8”, maximum symmetry in position A “V22”, shape “V10”, position of maximum transversal diameter “V23”, and apex in position A “V24”), which revealed the importance of these traits for the classification of the olive cultivars in clusters. The inertia accounted for the second axe (21.73%) was due essentially to the contribution of the leaf parameters (length “V1”, width “V2”, shape “V3” and the longitudinal curvature of the blade “V12”). Previous studies have demonstrate the importance of the fruit and endocarp morphological traits in the analysis of the olive biodiversity and especially the quantitative data of the fruit and the endocarp (Trigui and Msallem 2002; Grati Kamoun et al. 2006; Hanachi et al. 2008; Mnasri et al.2013 ; Mnasri et al. 2014).

The projection of the tested cultivars in the plane generated by the two axes PC1 and PC2 revealed the distribution of the 13 varieties in four main groups (figue 2) essentially according to their fruit weight. The first cluster grouped the varieties “Besbessi”, “Meski”, “Sayali” which are essentially table olives characterized by their high weight fruit (≥ 4g). The second cluster assembled the olives with double aptitude “Chetoui”, “Tounsi” and “Neb Jmel” which present a fruit weight higher than 2 g and less than 3 g. Whereas, the third group closed the oil varieties “Chemlali”, “Rajou”, “Souihli”, “El guim” and “Esradki” which are characterized essentially by their low weight fruit (≤ 1g). In turn the fourth cluster closed the oil variety “El Hor” and the double aptitude variety “Roumi” which are grouped by the around form of their fruits and endocarps. The result was consistent to our previous investigators of the morphological biodiversity of the millennium olive germoplasm in Tunisia (Mnasri et al. 2014) and the results of (Hannachi et al. 2008) and revealed that most of the chosen characteristics are suitable for discriminating between varieties (Polujah 2008).

Affinities among cultivars are shown in the obtained Ward’s dendrogram (Figure 3). A normalized maximum distance of 100 was used here as ultimate limit for clustering the olive varieties in four main groups. In contrast to the PCA the hierarchical analysis separate the cultivar “Souihli” characterized by the lowest fruit and endocarp weight and olives with (ovoid form and asymmetric diameter in position A and B) from the twelve other varieties. The second cluster consists of five main cultivars (Rajou, El Guim, El Hor, Essradki and Chemlali) which are a mix of oil and a double aptitude varieties characterized by their ovoid fruits symmetric in position A and B. The third group cluster essentially varieties with double aptitude (Neb Jmel, Tounsi, Chetoui and Sayali) which can be used for producing oil or cannoning. These cultivars are characterized by fruits with elongated to ovoid form asymmetric in position A and presented an endocarp with a sharp-pointed apex. When, the fourth group consists of the main table varieties (Meski, Besbessi and Roumi”) used essentially for cannoning and characterized by their high weight fruit. As a result the quantitative and the qualitative morphological traits of the fruit and the endocarp and specially the fruit weight clarified some of the relationships between the autochthon olive cultivars in the governorate of Siliana. Paula et al.(2005);Hanachi et al.(2008) ; Mnasri et al.(2013),classified olive cultivars in the clusters according to its morphological characterization and found that the fitness of the dendrogram obtained using the morphological data had good segregation on the population. Hanachi et al. (2012) constructed dendrogram of the morphological traits for the analysis of the phylogenetic relationships among the wild and cultivated olive cultivars in Tunisia .Whereas, Grati-Kamoun et al. (2006) showed that the classification of olive genotypes in the clusters, based on several quantitative and qualitative morphological traits was poor, specially that the morphological markers have the disadvantage of the small number of polymorphism detected and of being environmentally dependent.

The study of the morphological biodiversity of the autochthon olive varieties localized in the government of Siliana give a basis for comparing specimens in order to reduce the loss of genetic authenticity of Tunisian olive varieties and to preserve the local genetic resources of olive (Olea europea L.), which could be used from the agronomic point of view to substantially improve the production in the government of Siliana. Nevertheless these results are indicative and a more complete database of morphological and chemical characteristics based on several years of observation is needed. Moreover, molecular data are needed in order to identify the level of reliability for the morphological traits and to provide information on which parameters should be useful to distinguish olive cultivars.

Badenes M.L. (1991) Characterization and identification of apricot cultivars by morphological and biochemical methods. Doctoral thesis at the University of Valencia, Valencia (Spain).

Cantini C., Ciamato A., Autino A., Redi A., Cresti M. (2008) Assessment of the Tuscan olive germplasm by microsatellite markers reveals genetic identities and differentdiscrimination capacity among and within cultivars. Journal of the American Society for Horticultural Science 133:598–604.

Hannachi H. (2008) Study of the olive variability in the North of Tunisia. Doctoral thesis at the University of Tunis, Tunis (Tunisia).

Mnasri R.S., Saddoud D.O., Ferchichi A. (2013) The study of olive oil quality and morphological biodiversity of Olea europaea L. in the region of “Hbebsa”. Journal of Biodiversity and Environmental Sciences 4: 59-66.