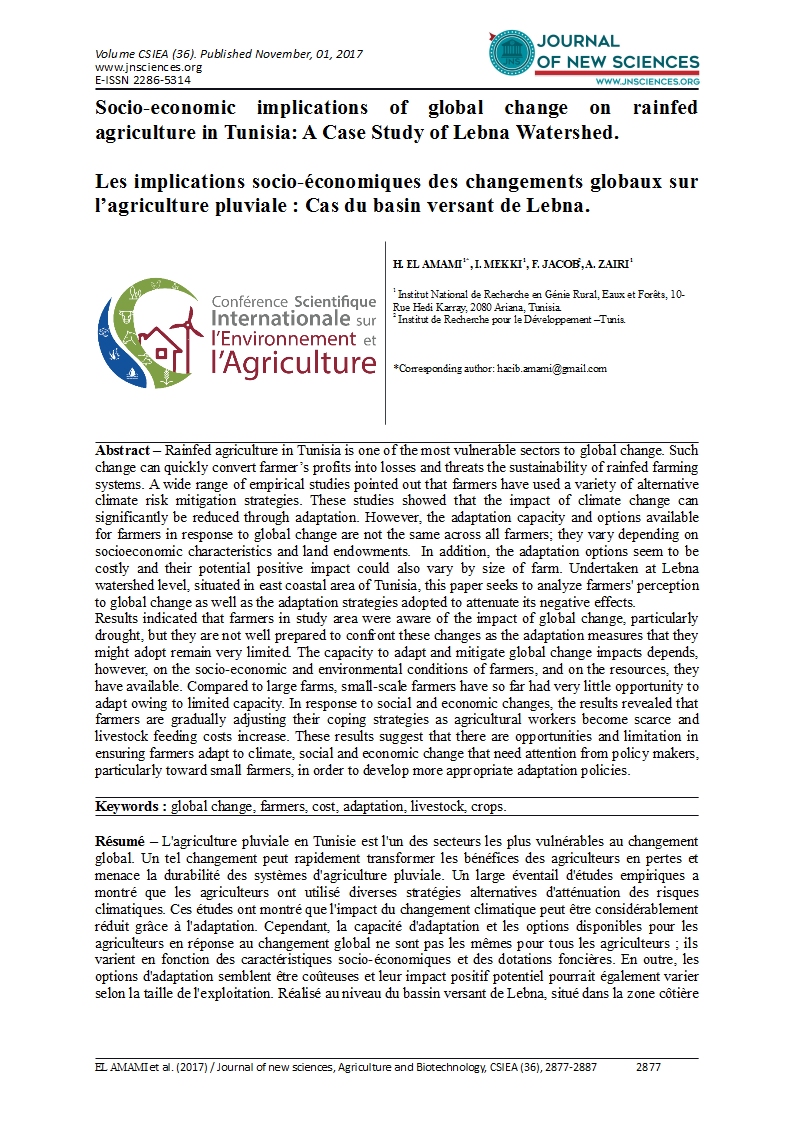 Abstract – Rainfed agriculture in Tunisia is one of the most vulnerable sectors to global change. Such change can quickly convert farmer’s profits into losses and threats the sustainability of rainfed farming systems. A wide range of empirical studies pointed out that farmers have used a variety of alternative climate risk mitigation strategies. These studies showed that the impact of climate change can significantly be reduced through adaptation. However, the adaptation capacity and options available for farmers in response to global change are not the same across all farmers; they vary depending on socioeconomic characteristics and land endowments. In addition, the adaptation options seem to be costly and their potential positive impact could also vary by size of farm. Undertaken at Lebna watershed level, situated in east coastal area of Tunisia, this paper seeks to analyze farmers' perception to global change as well as the adaptation strategies adopted to attenuate its negative effects. Results indicated that farmers in study area were aware of the impact of global change, particularly drought, but they are not well prepared to confront these changes as the adaptation measures that they might adopt remain very limited. The capacity to adapt and mitigate global change impacts depends, however, on the socio-economic and environmental conditions of farmers, and on the resources, they have available. Compared to large farms, small-scale farmers have so far had very little opportunity to adapt owing to limited capacity. In response to social and economic changes, the results revealed that farmers are gradually adjusting their coping strategies as agricultural workers become scarce and livestock feeding costs increase. These results suggest that there are opportunities and limitation in ensuring farmers adapt to climate, social and economic change that need attention from policy makers, particularly toward small farmers, in order to develop more appropriate adaptation policies.

Abstract – In Tunisia, the climate is characterized by the irregularity of rainfall in time and space with a tendency towards more aridity, from which arises the constraint of drought. The latter is considered a limiting factor in the production of barley (Hordeum vulgare L.) which is becoming more and more unstable. An effective and sustainable means of combating this constraint would be the creation of cultivars with greater tolerance to drought. The use of haploids is very beneficial in the creation of cereals. Thus, the technique for obtaining haploids by anther culture consists in orienting the gametophytic program of the microspores towards a sporophytic program. In this context, the objective of the study is to create drought tolerant, barley doubled haploid lines by anther culture. This work presents the androgenic response of ten barley varieties (Hordeum vulgare L.): Rihanne, Manel, Momtez, Faiz, Roho, Tej, Kunouz, Lamsi, Ardhaoui and Safra originating from Tunisia. Androgenic fitness was assessed in parents and their hybrids (F1). The stage of culture of the anthers was determined on the basis of cytological criteria. The results presented in this study show a variability in the response to in vitro androgenesis of parental genotypes and their hybrids. Genotypic variability was observed in embryo induction parameters and regeneration of green plants. A high albinism rate that may exceed 60% has been observed in parents and hybrids. This rate of albinism may be due to several environmental and genetic factors. The systematic control of the ploidy level in all chlorophyllous plants shows that the majority of regenerated plants are diploid. The weak anther responses to in vitro androgenesis observed in our study may be explained, in part, by the growing conditions of open-field mother plants where plants are exposed to unsuitable growing conditions. Admittedly, the plants have been exposed to stress that would have caused morphological, physiological and molecular changes in the anther that would have reduced their androgenic response in vitro. 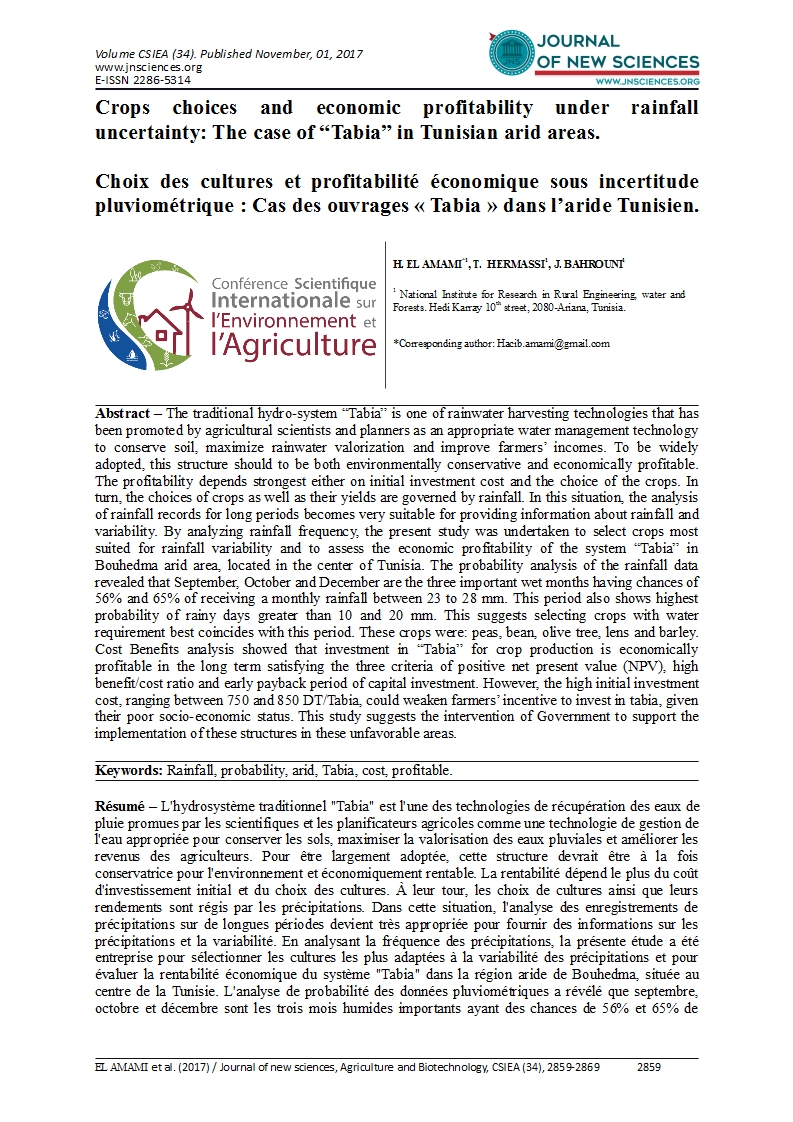 Abstract – The traditional hydro-system “Tabia” is one of rainwater harvesting technologies that has been promoted by agricultural scientists and planners as an appropriate water management technology to conserve soil, maximize rainwater valorization and improve farmers’ incomes. To be widely adopted, this structure should to be both environmentally conservative and economically profitable. The profitability depends strongest either on initial investment cost and the choice of the crops. In turn, the choices of crops as well as their yields are governed by rainfall. In this situation, the analysis of rainfall records for long periods becomes very suitable for providing information about rainfall and variability. By analyzing rainfall frequency, the present study was undertaken to select crops most suited for rainfall variability and to assess the economic profitability of the system “Tabia” in Bouhedma arid area, located in the center of Tunisia. The probability analysis of the rainfall data revealed that September, October and December are the three important wet months having chances of 56% and 65% of receiving a monthly rainfall between 23 to 28 mm. This period also shows highest probability of rainy days greater than 10 and 20 mm. This suggests selecting crops with water requirement best coincides with this period. These crops were: peas, bean, olive tree, lens and barley. Cost Benefits analysis showed that investment in “Tabia” for crop production is economically profitable in the long term satisfying the three criteria of positive net present value (NPV), high benefit/cost ratio and early payback period of capital investment. However, the high initial investment cost, ranging between 750 and 850 DT/Tabia, could weaken farmers’ incentive to invest in tabia, given their poor socio-economic status. This study suggests the intervention of Government to support the implementation of these structures in these unfavorable areas. 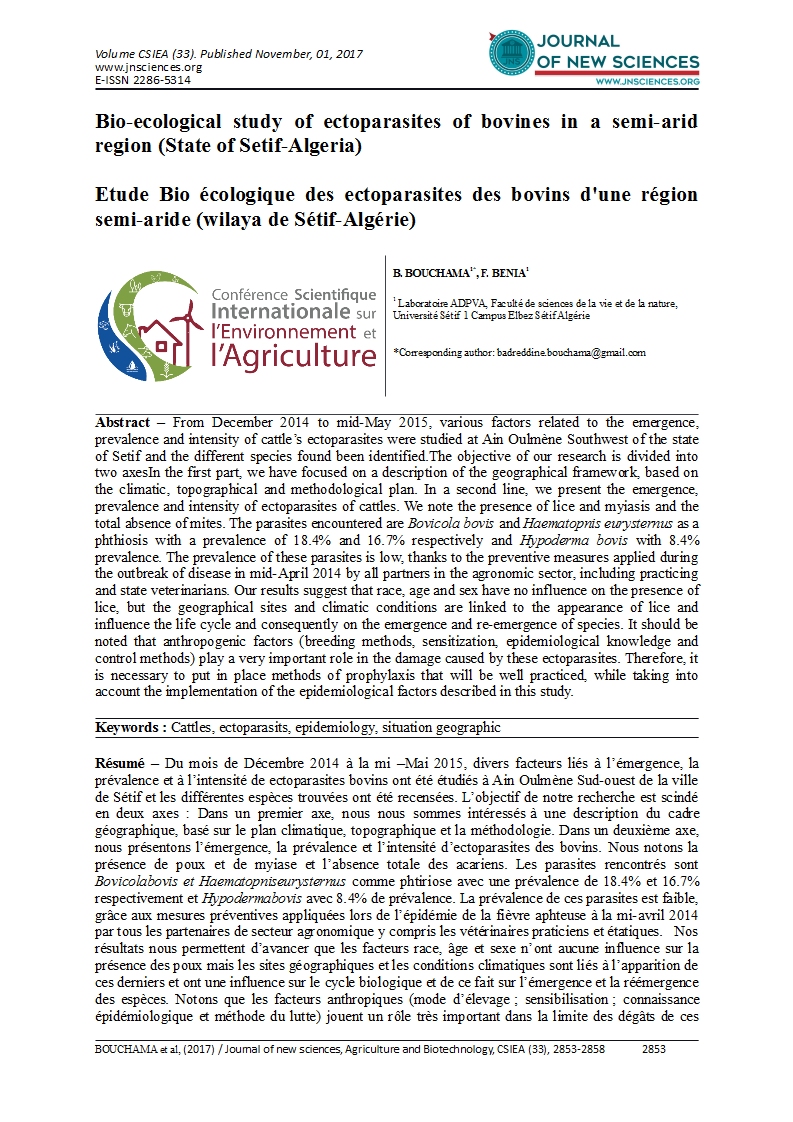 Abstract – From December 2014 to mid-May 2015, various factors related to the emergence, prevalence and intensity of cattle’s ectoparasites were studied at Ain Oulmène Southwest of the state of Setif and the different species found been identified.The objective of our research is divided into two axesIn the first part, we have focused on a description of the geographical framework, based on the climatic, topographical and methodological plan. In a second line, we present the emergence, prevalence and intensity of ectoparasites of cattles. We note the presence of lice and myiasis and the total absence of mites. The parasites encountered are Bovicola bovis and Haematopnis eurysternus as a phthiosis with a prevalence of 18.4% and 16.7% respectively and Hypoderma bovis with 8.4% prevalence. The prevalence of these parasites is low, thanks to the preventive measures applied during the outbreak of disease in mid-April 2014 by all partners in the agronomic sector, including practicing and state veterinarians. Our results suggest that race, age and sex have no influence on the presence of lice, but the geographical sites and climatic conditions are linked to the appearance of lice and influence the life cycle and consequently on the emergence and re-emergence of species. It should be noted that anthropogenic factors (breeding methods, sensitization, epidemiological knowledge and control methods) play a very important role in the damage caused by these ectoparasites. Therefore, it is necessary to put in place methods of prophylaxis that will be well practiced, while taking into account the implementation of the epidemiological factors described in this study. 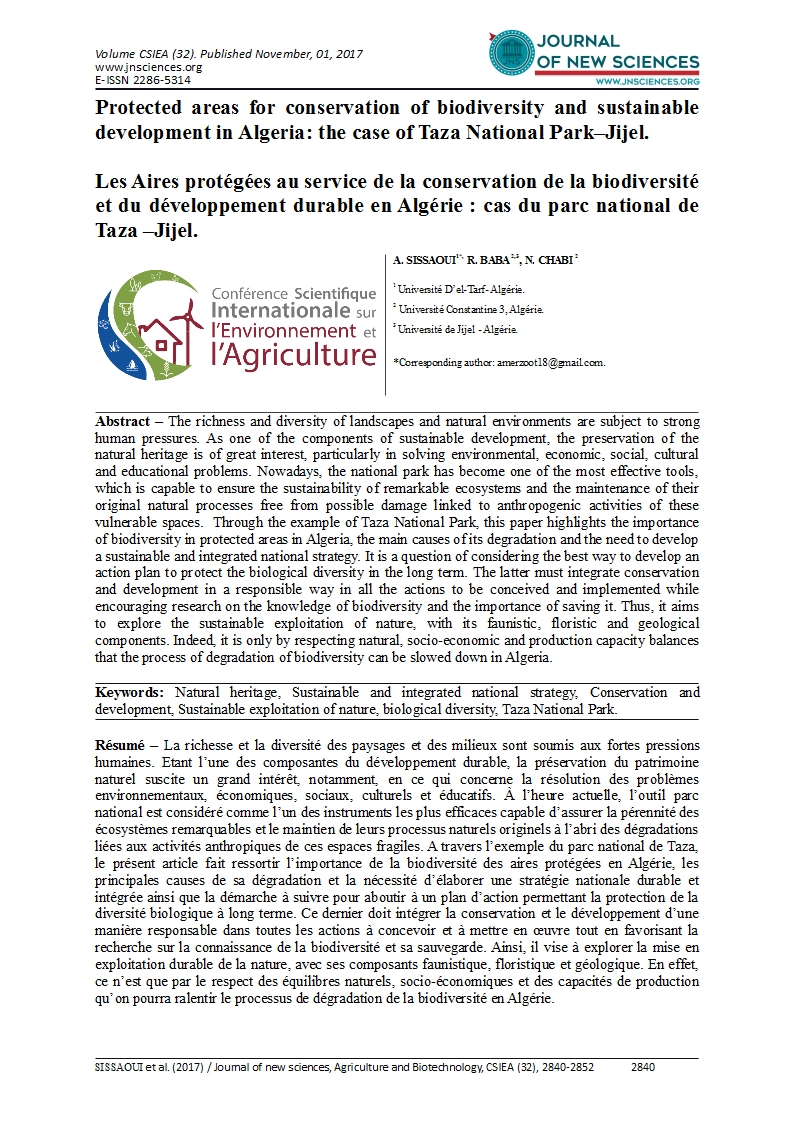 Abstract – The richness and diversity of landscapes and natural environments are subject to strong human pressures. As one of the components of sustainable development, the preservation of the natural heritage is of great interest, particularly in solving environmental, economic, social, cultural and educational problems. Nowadays, the national park has become one of the most effective tools, which is capable to ensure the sustainability of remarkable ecosystems and the maintenance of their original natural processes free from possible damage linked to anthropogenic activities of these vulnerable spaces. Through the example of Taza National Park, this paper highlights the importance of biodiversity in protected areas in Algeria, the main causes of its degradation and the need to develop a sustainable and integrated national strategy. It is a question of considering the best way to develop an action plan to protect the biological diversity in the long term. The latter must integrate conservation and development in a responsible way in all the actions to be conceived and implemented while encouraging research on the knowledge of biodiversity and the importance of saving it. Thus, it aims to explore the sustainable exploitation of nature, with its faunistic, floristic and geological components. Indeed, it is only by respecting natural, socio-economic and production capacity balances that the process of degradation of biodiversity can be slowed down in Algeria. 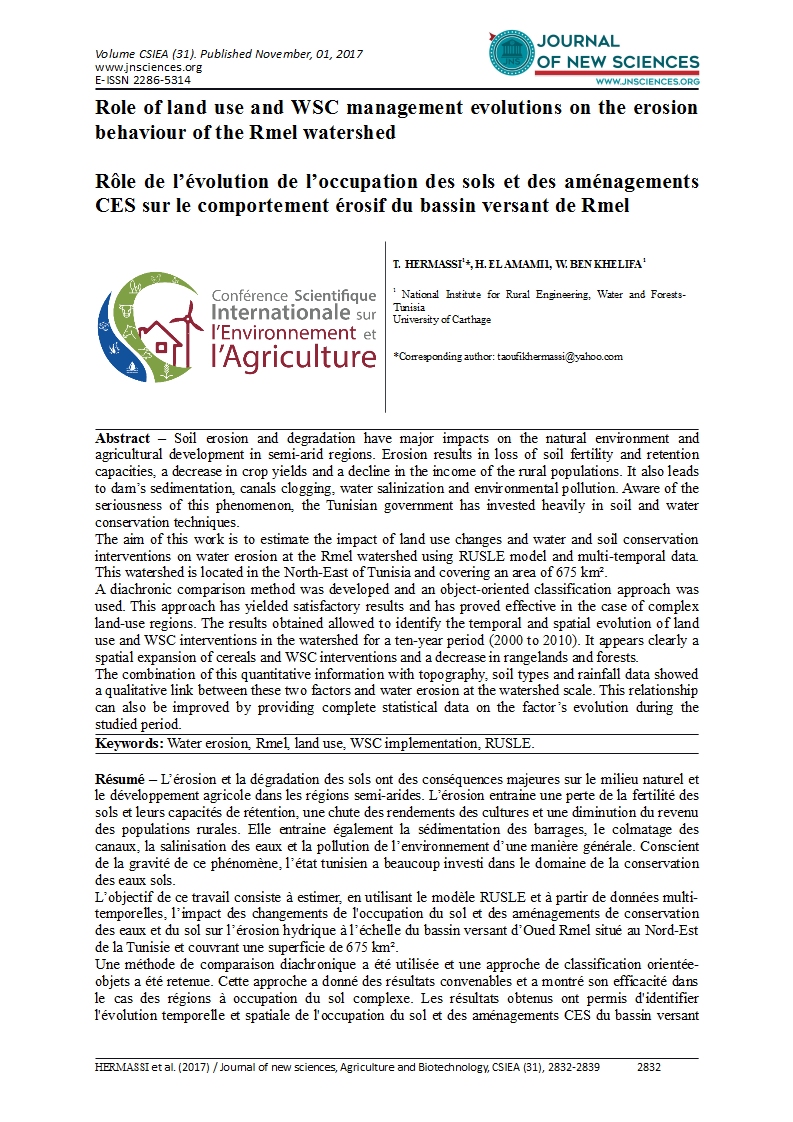 Abstract – Soil erosion and degradation have major impacts on the natural environment and agricultural development in semi-arid regions. Erosion results in loss of soil fertility and retention capacities, a decrease in crop yields and a decline in the income of the rural populations. It also leads to dam’s sedimentation, canals clogging, water salinization and environmental pollution. Aware of the seriousness of this phenomenon, the Tunisian government has invested heavily in soil and water conservation techniques. The aim of this work is to estimate the impact of land use changes and water and soil conservation interventions on water erosion at the Rmel watershed using RUSLE model and multi-temporal data. This watershed is located in the North-East of Tunisia and covering an area of 675 km². A diachronic comparison method was developed and an object-oriented classification approach was used. This approach has yielded satisfactory results and has proved effective in the case of complex land-use regions. The results obtained allowed to identify the temporal and spatial evolution of land use and WSC interventions in the watershed for a ten-year period (2000 to 2010). It appears clearly a spatial expansion of cereals and WSC interventions and a decrease in rangelands and forests. The combination of this quantitative information with topography, soil types and rainfall data showed a qualitative link between these two factors and water erosion at the watershed scale. This relationship can also be improved by providing complete statistical data on the factor’s evolution during the studied period. 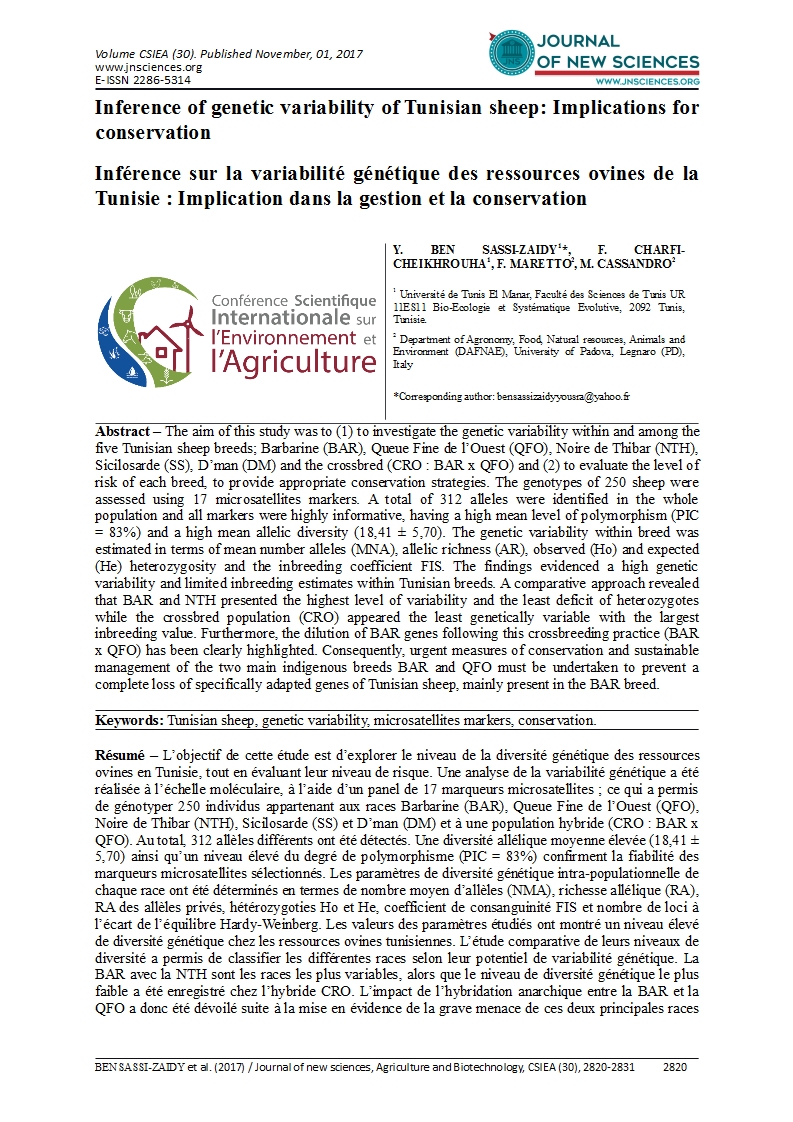 Abstract – The aim of this study was to (1) to investigate the genetic variability within and among the five Tunisian sheep breeds; Barbarine (BAR), Queue Fine de l’Ouest (QFO), Noire de Thibar (NTH), Sicilosarde (SS), D’man (DM) and the crossbred (CRO : BAR x QFO) and (2) to evaluate the level of risk of each breed, to provide appropriate conservation strategies. The genotypes of 250 sheep were assessed using 17 microsatellites markers. A total of 312 alleles were identified in the whole population and all markers were highly informative, having a high mean level of polymorphism (PIC = 83%) and a high mean allelic diversity (18,41 ± 5,70). The genetic variability within breed was estimated in terms of mean number alleles (MNA), allelic richness (AR), observed (Ho) and expected (He) heterozygosity and the inbreeding coefficient FIS. The findings evidenced a high genetic variability and limited inbreeding estimates within Tunisian breeds. A comparative approach revealed that BAR and NTH presented the highest level of variability and the least deficit of heterozygotes while the crossbred population (CRO) appeared the least genetically variable with the largest inbreeding value. Furthermore, the dilution of BAR genes following this crossbreeding practice (BAR x QFO) has been clearly highlighted. Consequently, urgent measures of conservation and sustainable management of the two main indigenous breeds BAR and QFO must be undertaken to prevent a complete loss of specifically adapted genes of Tunisian sheep, mainly present in the BAR breed.