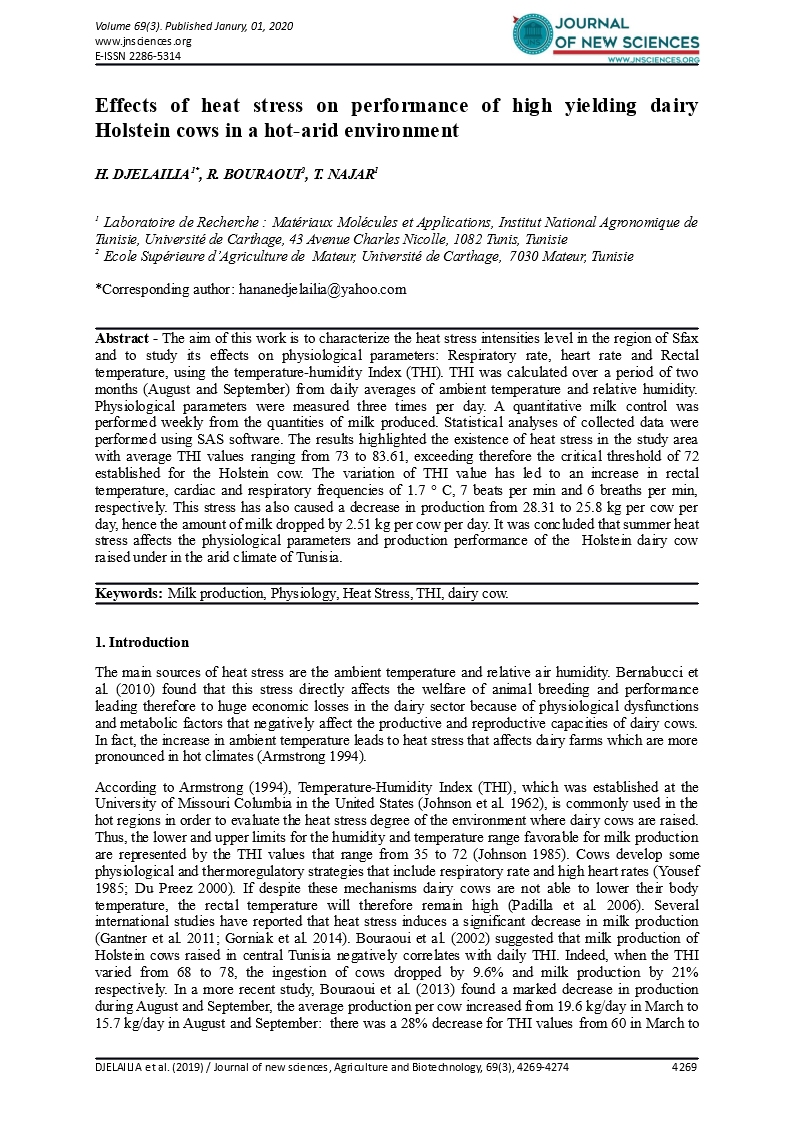 Abstract - The aim of this work is to characterize the heat stress intensities level in the region of Sfax and to study its effects on physiological parameters: Respiratory rate, heart rate and Rectal temperature, using the temperature-humidity Index (THI). THI was calculated over a period of two months (August and September) from daily averages of ambient temperature and relative humidity. Physiological parameters were measured three times per day. A quantitative milk control was performed weekly from the quantities of milk produced. Statistical analyses of collected data were performed using SAS software. The results highlighted the existence of heat stress in the study area with average THI values ​​ranging from 73 to 83.61, exceeding therefore the critical threshold of 72 established for the Holstein cow. The variation of THI value has led to an increase in rectal temperature, cardiac and respiratory frequencies of 1.7 ° C, 7 beats per min and 6 breaths per min, respectively. This stress has also caused a decrease in production from 28.31 to 25.8 kg per cow per day, hence the amount of milk dropped by 2.51 kg per cow per day. It was concluded that summer heat stress affects the physiological parameters and production performance of the Holstein dairy cow raised under in the arid climate of Tunisia.

The main sources of heat stress are the ambient temperature and relative air humidity. Bernabucci et al. (2010) found that this stress directly affects the welfare of animal breeding and performance leading therefore to huge economic losses in the dairy sector because of physiological dysfunctions and metabolic factors that negatively affect the productive and reproductive capacities of dairy cows. In fact, the increase in ambient temperature leads to heat stress that affects dairy farms which are more pronounced in hot climates (Armstrong 1994).

According to Armstrong (1994), Temperature-Humidity Index (THI), which was established at the University of Missouri Columbia in the United States (Johnson et al. 1962), is commonly used in the hot regions in order to evaluate the heat stress degree of the environment where dairy cows are raised. Thus, the lower and upper limits for the humidity and temperature range favorable for milk production are represented by the THI values ​​that range from 35 to 72 (Johnson 1985). Cows develop some physiological and thermoregulatory strategies that include respiratory rate and high heart rates (Yousef 1985; Du Preez 2000). If despite these mechanisms dairy cows are not able to lower their body temperature, the rectal temperature will therefore remain high (Padilla et al. 2006). Several international studies have reported that heat stress induces a significant decrease in milk production (Gantner et al. 2011; Gorniak et al. 2014). Bouraoui et al. (2002) suggested that milk production of Holstein cows raised in central Tunisia negatively correlates with daily THI. Indeed, when the THI varied from 68 to 78, the ingestion of cows dropped by 9.6% and milk production by 21% respectively. In a more recent study, Bouraoui et al. (2013) found a marked decrease in production during August and September, the average production per cow increased from 19.6 kg/day in March to 15.7 kg/day in August and September: there was a 28% decrease for THI values ​​from 60 in March to 79 in August.

In the same vein, this work aims to study the impact of heat stress on the production performance and physiological parameters of Holstein dairy cows raised in the arid regions of Tunisia.

The governorate of Sfax occupies a privileged geographical position between the center and the south of Tunisia, with a wide opening on the Mediterranean: a coast of 200 km. The study was conducted at the Agro Combine El Hajeb (Chaal) belonging to the breeding office from The Tunisian Ministry of Agronomy. This site is located in the south of the governorate of Sfax at 13 Km. It belongs to the lower arid bioclimatic stage. It has a desert climate which is characterized by an abnormally hot and dry summer and a very cold winter. Rainfall is characterized by extreme variability and poor distribution during the year with an average of 212 mm.

The studied dairy herd consists of Holstein cows born and raised in Tunisia. The barn is semi-open to free housing, in which animals are divided into four identical batches. In our study, we took 15 primiparous (40%) and multiparous (60%) lactating cows at the same level of production (25 ± 3.5 Kg per cow per day) to ensure animal’s homogeneity.

Cows received a basic ration of roughage and supplementation with concentrate feed. A basic diet consisting of 10 kg oat ensilage, 5 kg oat hay and 10 kg oat green, the supplementation was 8 kg of concentrates (the nutritional values ​​of different foods are shown in Table 1). Watering was permanent and at will, it was provided by collective waterers.

The climate parameters at the studied site, were collected daily from specialized equipment (thermo-hygrometers) permanently installed in batches. During the experimental period, the daily temperature and relative humidity were (average, maximum and minimum) at a height of 2 meters. Physiological parameters: respiratory rate, heart rate and rectal temperature were measured three times a day (7: 00 am 12: 00 pm and 6 pm).

The climatic data collected was used to measure the intensity of heat stress on the milk production and the physiological parameters by calculating the index of temperature-humidity from the formula developed by Johnson et al. (1962).

Figure 1 shows that the Holstein dairy cow raised in El Hajeb was exposed to heat stress during the study period, characterized by THI values​​ranging from 73 ± 0.9 to 83.61± 1.2 that exceed the critical threshold of 72, suggested by Johnson (1985).

From the THI data shown in Table 2, and according to the classification of Armstrong (1994), it can be distinguished that the dairy cow was exposed to a medium/moderate heat stress during August and September with an average THI value of 78.7, especially during the first week of August when the THI value can reach on average 83.61 with a maximum of 85.6. Heat stress began to decline from the last week of September, which descreased from 81.42 to 73 on average.

According to Ben Salem and Bouraoui (2009), the observed stress is largely explained by the high temperatures recorded during that period, which exceeded the higher critical temperature of thermoneutrality for the Holstein breed. In fact, the average temperatures recorded during the experimental period were respectively 30.21, 28.46, 28.94 and 27.23 ° C for August and 28.1, 28, 27.51, and 25.86 ° C for September (Table 2). Meyer (2009) reported that the adjustment of the herd's feeding behavior and the control of environmental factors in the stables will significantly reduce the negative effects of stress.

Figure 2 shows that the daily milk production per cow negatively correlates with THI values ​​during the test months (August and September). The production per cow declined from 28.35 to 25.8 kg. The corresponding THI values ​​increased from 73 to 83.61 which exceed the critical threshold of 72 proposed by Johnson (1985). This stress leads to a decrease in milk production which dropped to 2.51 kg per cow per day. This decline in terms of the quantity produced can be explained by the increase of the ambient temperature during the hot period. Indeed, the average maximum temperature recorded was 30.2 ° C. Maintaining high temperatures in summer may explain the drop in milk production. These results confirm those of Bouraoui et al. (2002), who noticed a decrease of 21% in dairy production per cow when THI values ​​increased from 68 to 78. These results are also in agreement with West (2003) who showed that the Holstein daily milk production decreases on average by 0.88 kg for each unit of THI.

Figure 3 illustrates the relationship between the THI values ​​and respiratory rates. In fact, a respiratory rate value of 80 breaths per min characterized by the highest THI of 83.61 and the most noticeable decrease coincides with the lowest THI values (75 resp / min for 73). Increasing the respiratory rate under heat stress conditions is an effective and suitable response for dairy cows to evacuate extra-heat through evaporation (Thomas et Pearson 1986 ; Silanikove 2000). Indeed, this stress caused an increase in the respiratory rate of 6 breaths per minute. These results are in agreement with those reported in the literature (Berman et al. 1985) which indicate an increase in the respiratory rate with any rise in ambient temperature and THI. Du Preez (2000) reported that with a THI value of 76.4, Holstein cows had an RF of 96 resp / min, while in our case, the Holstein cows were only at 77 resp / min with a corresponding THI (average 78.7).

Figure 4 shows that cardiac references are more frequent with the existence of high THI values. Indeed, the measured cardiac frequency averages range from 75 to 80 beats per min while the THI ranges from 73 to 83.61. It should be noted that the CF increases by about 5 beats per minute. This response shows that the dairy cow involves adaptation and compensation mechanisms to maintain its homeothermia. These results agree with those of Bianca (1976) who has reported that acute heat exposure often leads to an increase in cardiac frequency. These results are also consistent with those of Rejeb et al. (2012) who argued that when THI increased from 65.6 to 83.3, the average heart rate in high-producing dairy cows ranged from 62.1 to 80.3 beats per minute.

Rectal temperature is often used as a key indicator to highlight the adverse effect of the environment on growth, production and reproduction. These results are in agreement with those reported in the literature (Aréchiga 1998 ; West 1999) indicating that any increase in ambient temperature is accompanied by an increase in rectal temperature. The average RT found in our experiment (40.41 ° C) concord with that reported by Espinosa et al. (2009) who reported that Holstein cow RT reached 40.1 ° C when THI was 78.9.

The studied region was charactérized by heat stress during August and September. The THI values were varied from73 to 83.61. A decrease was recorded in daily milk production by 2.51 kg per cow per day. This stress generates an increase in respiratory and cardiac frequencies as well as rectal temperature by 5 breaths per minute, 5 beats per minute and 1.7 ° C, respectively. This confirms that Holstein dairy cows raised in the arid regions of Tunisia are negatively affected by heat stress during the summer period.

Acknowledgements. The authors express their gratitude to the Direction of the Livestock and Pasture (OEP, Tunisia) in Sfax region.

Du preez JH (2000) Parameters for the determination and evaluation of heat stress in dairy cattle in South Africa. Onderstepoort Journal of Veterenary reaserch. 67:263-271.

Gantner R (2011) Temperature-humidity index values and their significance on the daily production of dairy cattle. Mljekarstvo 61 (1), 56-63.