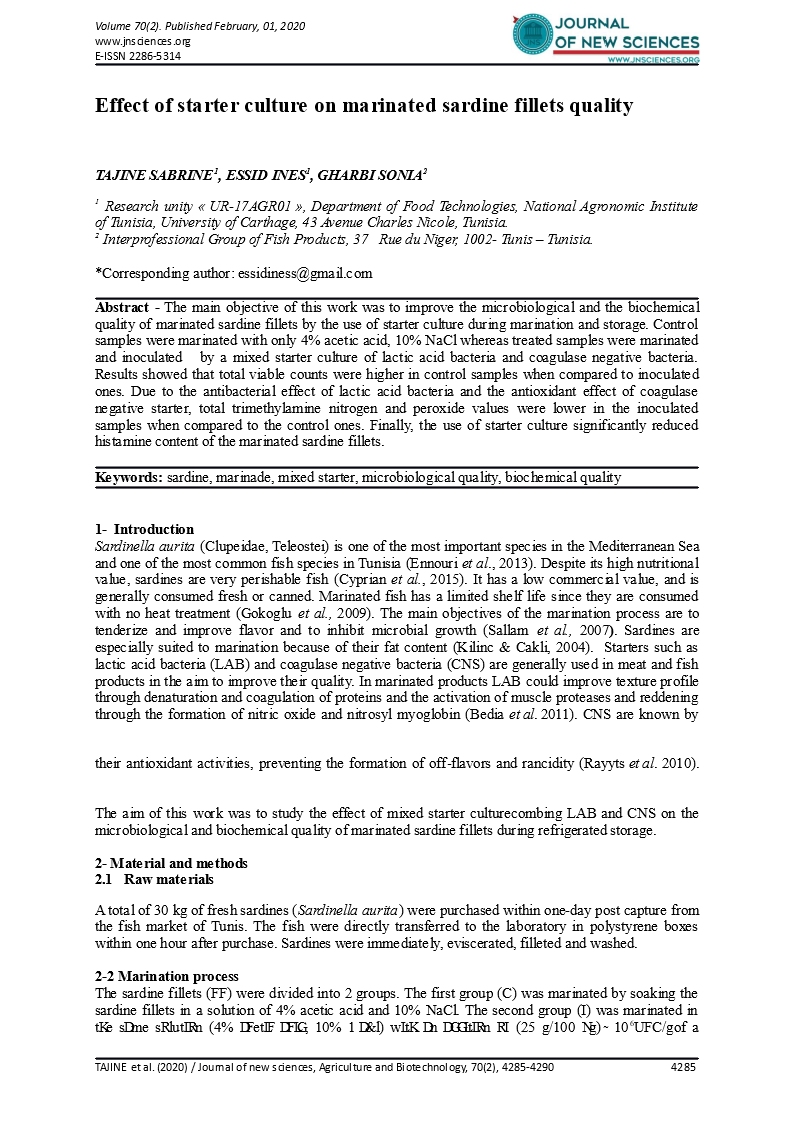 Abstract - The main objective of this work was to improve the microbiological and the biochemical quality of marinated sardine fillets by the use of starter culture during marination and storage. Control samples were marinated with only 4% acetic acid, 10% NaCl whereas treated samples were marinated and inoculated by a mixed starter culture of lactic acid bacteria and coagulase negative bacteria. Results showed that total viable counts were higher in control samples when compared to inoculated ones. Due to the antibacterial effect of lactic acid bacteria and the antioxidant effect of coagulase negative starter, total trimethylamine nitrogen and peroxide values were lower in the inoculated samples when compared to the control ones. Finally, the use of starter culture significantly reduced histamine content of the marinated sardine fillets.

Sardinella aurita (Clupeidae, Teleostei) is one of the most important species in the Mediterranean Sea and one of the most common fish species in Tunisia (Ennouri et al., 2013). Despite its high nutritional value, sardines are very perishable fish (Cyprian et al., 2015). It has a low commercial value, and is generally consumed fresh or canned. Marinated fish has a limited shelf life since they are consumed with no heat treatment (Gokoglu et al., 2009). The main objectives of the marination process are to tenderize and improve flavor and to inhibit microbial growth (Sallam et al., 2007). Sardines are especially suited to marination because of their fat content (Kilinc & Cakli, 2004). Starters such as lactic acid bacteria (LAB) and coagulase negative bacteria (CNS) are generally used in meat and fish products in the aim to improve their quality. In marinated products LAB could improve texture profile through denaturation and coagulation of proteins and the activation of muscle proteases and reddening through the formation of nitric oxide and nitrosyl myoglobin (Bedia et al. 2011). CNS are known by their antioxidant activities, preventing the formation of off‐flavors and rancidity (Rayyts et al. 2010). The aim of this work was to study the effect of mixed starter culturecombing LAB and CNS on the microbiological and biochemical quality of marinated sardine fillets during refrigerated storage.

A total of 30 kg of fresh sardines (Sardinella aurita) were purchased within one-day post capture from the fish market of Tunis. The fish were directly transferred to the laboratory in polystyrene boxes within one hour after purchase. Sardines were immediately, eviscerated, filleted and washed.

The sardine fillets (FF) were divided into 2 groups. The first group (C) was marinated by soaking the sardine fillets in a solution of 4% acetic acid and 10% NaCl. The second group (I) was marinated in the same solution (4% acetic acid, 10% NaCl) with an addition of (25 g/100 kg) ̴ 106UFC/gof a commercial starter culture starter: L. sakei + S. carnosus (BFL‐F06, CHR HANSEN, Nienburg, Germany). After 72 h of marination, sardine fillets were removed from the solutions and put into glass jars filled with olive oil. A total of 12 glass jars were prepared per group. Packed sardines were stored at 4°C for 90 days.

Chemical analyses were done on fresh sardine fillets, after marination and during storage. Total volatile base nitrogen (TVB-N) and trimethylamine nitrogen (TMA-N) were determined by the micro-diffusion method of Conway (Cobb et al., 1973). Specifically, TMA-N was determined after the addition of formaldehyde. The sardine content in TVB-N and TMA-N were expressed as mg TVB-N per 100 g of sample and mg TMA-N per 100 g of sample, respectively. Peroxide values were measured based on the standard AOCS method (2009). The peroxide value of fish oil is expressed as milliequivalents of peroxide per 1000 g of oil. The histamine content was determined using the colorimetric method described by (Patange et al., 2005). Histamine content was extracted from fish muscle and determined as described by (Patange et al., 2005).

All measurements were done in triplicate. Data were statistically analyzed using a two-way ANOVA procedure of STATGRAPHICS Centurion (XV) 16.1.15software (Manugistics Inc, Cambridge, MA). Duncan’s multiple range test was used to determine any significant difference between mean values, and evaluations were based on a significance level of P< 0.05.

Counts of total viable counts (TVC), total coliform (TC) and lactic acid bacteria (LAB) of fresh fillets and fillets samples during marination and storage are presented in table 1. Results showed a significant difference between control samples and those inoculated with starter culture (P<0.05). After marination, total viable counts decreased from 2.9 to 2.1 log UFC/g for control samples against an increase from 2.9 to 3.1 for the inoculated ones. Kilinc et al., (2008) reported that bacteria are able to continue their activity more or less rapidly according to their ability to adapt to the medium. Acetic acid provides an environment suitable for the action of proteases present in the muscle. The products of proteolysis provide an energy source for the growth of acetic acid tolerant bacteria. LAB were inhibited in the control sample.Inhibition of LAB in the control sample was related to high concentration of NaCl (10 %). In the experimental sample, counts of TVC and LAB increased during marination, this increase is explained by the addition of the starter culture. After marination, counts of total coliforms in control samples were significantly lower than those enumerated in inoculated ones (P<0.05). This result can be explained by the antimicrobial effect of LAB (Essid et al., 2013). During storage, a significant decrease (P<0.05) of microorganisms was observed for all samples, due to low temperature and lack of O2.

TVB-N is produced from the degradation of proteins and non-protein nitrogenous compounds, mainly as result of microbial activity (Connel, 1975). The initial TVB-N in fresh sardine fillets was 4.48±0.98 mg/100 g fresh fillet (table 2). A significant decrease (P<0.05) was observed in TVB-N values from 4.48 to 3.98, 3.88 mg/100 g fish fillet for control and inoculated samples, respectively, after the marinating process (table 2). This decrease is related to the effects of acetic acid and salt which were used in marination and which leached out the TVB-N. During storage, TVB-N values increased in all samples (figure 1). This increase is probably due to a combination of microbiological and autolytic degradation of nucleotides and free amino acids (Sallam et al., 2007). No significant differences were observed between control samples and those inoculated with starter culture (P>0.05). During marination, TMA values increased significantly (P<0.05) from 0.74 (fresh fillets) to 0.89 and 0.59 mg/100 gfor control and inoculated samples, respectively (table 2). This increase is due to the reduction of TMAO by bacterial activity and partly by intrinsic enzymes (Gram & Huss, 1996). During storage TMA values increased to the two samples without reaching limit for acceptability of fish (5-10 mg/100 g sample) (Sikorski et al,,1989) (figure 1). Due to the effect of LAB, inoculated samples showed the lower values of TMA (P<0.05).

Means with the same parameter and the same column with different superscript letters (a,b) are different (P<0.05)

Mean with the same parameter and the same line with different superscript numbers (1,2,3) are different (P<0.05)

Determination of hydroperoxides is used to monitor primary oxidation of sardine fat in the presence of three derivatives of hydroxy benzoic acid (Chandrasekar et al., 2016). PV values increased significantly for the two samples (p<0.05) during marination, from 0.35meq/kg fish to reach values of 1.50 and 1.46 meq/kg fish for C and I samples, respectively (table 2). During storage, PV values increased for the two samples without reaching the limit of freshness (5 meq/kg) (figure 1). PV values below 5meq/kg, indicate that the fat is fresh or that the hydroperoxides have been degraded into ketones (Chandrasekar et al., 2016). Inoculation with starter culture affect significantly peroxide values. CNS bacteria are known by their antioxidant activity (Essid et al., 2013) and are responsible of the reduction of PV in the inoculated samples.

Production of high levels of histamine in fish products can be fairly rapid and depends on the number of microorganisms present (Ababouch, et al., 1996). After 90 days of storage in the olive oil, histamines values increased from 0.60 mg/100 g in the fresh fillets to reach values of 2.51 and 2.1 mg/100 g for control and inoculated samples respectively (P<0.05) (figure 2). Histamine content did not develop beyond the limit (20 mg/100 g) set by the EU (EEC, 1991). The lowest histamine content was in the inoculated samples (P<0.05). In fact, the antimicrobial effects of LAB reduced microbial growth and tend to decrease histamine content.

The antibacterial effect of the LAB reducescounts of TVC and CT in the inoculate samples which leads to reduce TVB-N, TMA and histamines contents. The antioxidant activity of CNS ameliorates the oxidative stability of the marinated fillets.Using starter culture in marinated sardine fillets should improve their quality and increase their shelf life.