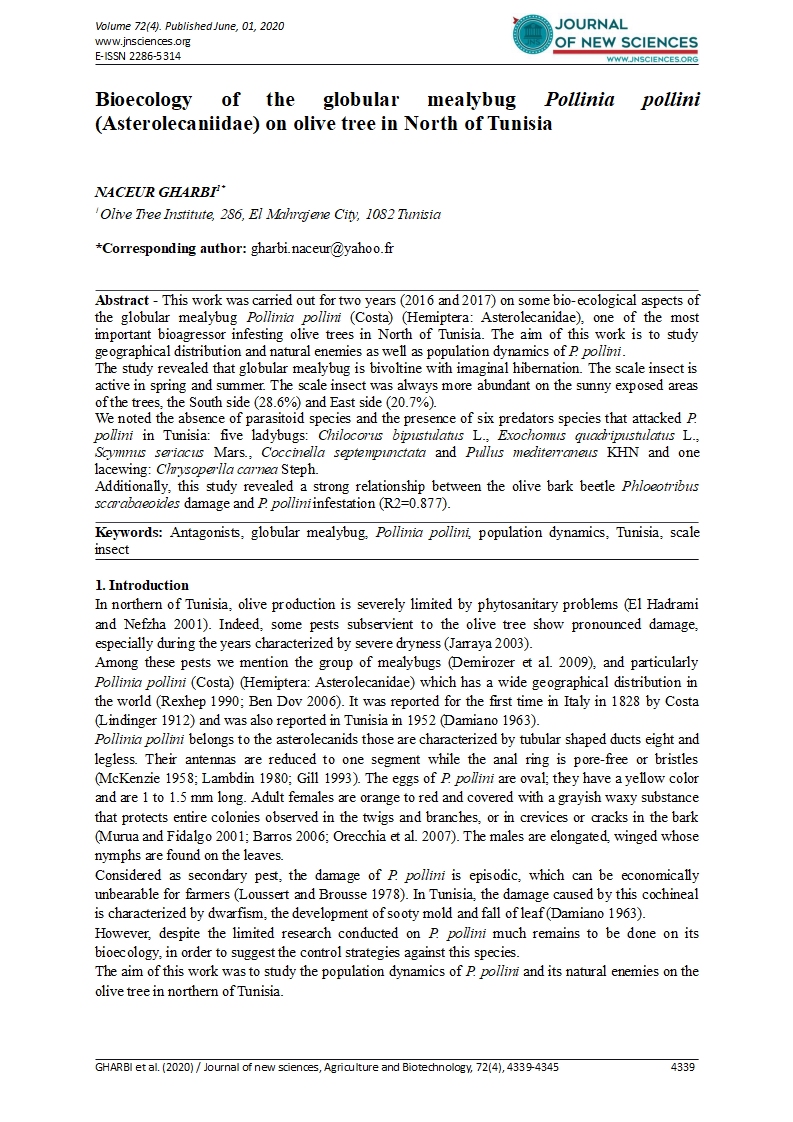 Abstract - This work was carried out for two years (2016 and 2017) on some bio-ecological aspects of the globular mealybug Pollinia pollini (Costa) (Hemiptera: Asterolecanidae), one of the most important bioagressor infesting olive trees in North of Tunisia. The aim of this work is to study geographical distribution and natural enemies as well as population dynamics of P. pollini. The study revealed that globular mealybug is bivoltine with imaginal hibernation. The scale insect is active in spring and summer. The scale insect was always more abundant on the sunny exposed areas of the trees, the South side (28.6%) and East side (20.7%). We noted the absence of parasitoid species and the presence of six predators species that attacked P. pollini in Tunisia: five ladybugs: Chilocorus bipustulatus L., Exochomus quadripustulatus L., Scymnus seriacus Mars., Coccinella septempunctata and Pullus mediterraneus KHN and one lacewing: Chrysoperlla carnea Steph.

In northern of Tunisia, olive production is severely limited by phytosanitary problems (El Hadrami and Nefzha 2001). Indeed, some pests subservient to the olive tree show pronounced damage, especially during the years characterized by severe dryness (Jarraya 2003).

Among these pests we mention the group of mealybugs (Demirozer et al. 2009), and particularly Pollinia pollini (Costa) (Hemiptera: Asterolecanidae) which has a wide geographical distribution in the world (Rexhep 1990; Ben Dov 2006). It was reported for the first time in Italy in 1828 by Costa (Lindinger 1912) and was also reported in Tunisia in 1952 (Damiano 1963).

Pollinia pollini belongs to the asterolecanids those are characterized by tubular shaped ducts eight and legless. Their antennas are reduced to one segment while the anal ring is pore-free or bristles (McKenzie 1958; Lambdin 1980; Gill 1993). The eggs of P. pollini are oval; they have a yellow color and are 1 to 1.5 mm long. Adult females are orange to red and covered with a grayish waxy substance that protects entire colonies observed in the twigs and branches, or in crevices or cracks in the bark (Murua and Fidalgo 2001; Barros 2006; Orecchia et al. 2007). The males are elongated, winged whose nymphs are found on the leaves.

Considered as secondary pest, the damage of P. pollini is episodic, which can be economically unbearable for farmers (Loussert and Brousse 1978). In Tunisia, the damage caused by this cochineal is characterized by dwarfism, the development of sooty mold and fall of leaf (Damiano 1963).

However, despite the limited research conducted on P. pollini much remains to be done on its bioecology, in order to suggest the control strategies against this species.

The aim of this work was to study the population dynamics of P. pollini and its natural enemies on the olive tree in northern of Tunisia.

This work concerned more than 280 olive groves distributed in all northern governorates: Tunis, Ariana, Ben Arous, Manouba, Bizerte, Beja, Kef, Seliana, Zaghoun and Nabeul. Prospections and sampling were conceded during 2016 and 2017. The purpose of this survey is to delimit the distribution air of P. pollini.

2.2.2. Sampling of P. pollini and its antagonists

The monitoring of P. pollini population dynamics and its antagonists on olive trees was conducted for two consecutive years from January 2016 to December 2017.

Sampling involved ten infested trees, randomly selected, of similar size and vegetation. This operation consists to take, every 2 weeks, from each tree five branches having the same length (≈ 20 cm), one of each from cardinal direction and the last branch from crown center of the tree.

The samples are placed in paper bags bearing the date and position on the tree. The counting of the dead and living stages of the pest was carried out in the laboratory using a stereomicroscope.

The number of generations was determined using the obtained data throughout the two successive years using the age–structure technique per sample over the year. Generation is defined, as the time required for an insect to complete its life cycle.

To study the beginning of appearance and abundance of P. pollini antagonists, ten heavily infested trees were selected and sampled periodically once a month. Throughout the monitoring period no phytosanitary treatment was applied. However, to collect the maximum number of antagonist species, we adopted the beating method and sampling of infested twigs. Different samples were transported to the laboratory and stored in well ventilated boxes until the appearance of all-natural enemies. The identification of antagonists was carried out under stereomicroscope by examination of mounted specimens in Hoyers solution.

During the two years of study, from various olive groves of Zaghoun governorate, periodic samples with different levels of scale insect P. pollini and olive bark beetle Phloeotribus scarabaeoides (Bernard 1788) infestations were collected and examined in the laboratory in order to evaluate the interaction between these two pests.

According to Jarraya (2003), P. pollini is mainly located in northwest of Tunisia, in the neighboring region of Algeria. Accordingly our investigation carried out in the different governorates in 2016 confirms that the P. pollini distribution covers all regions of northern Tunisia. Indeed, this pest is present everywhere and particularly in the abounded olive groves presenting trees suffering from water stress.

The results of P. pollini population dynamics on olive trees over 2016 and 2017 years are presented in (Fig. 1).

The climate is a limiting factor for pest outbreaks in general and more particularly for mealybugs. The increase in temperatures at the end of February is the first activator of oogenesis. Females swell and assume a pearly yellow color. The beginning of spawning occurs at the beginning of March and persists until the end of June. After a brief stop in July, it then resumed in August to stop in October.

The incubation period is very short, it is a few days. However, the first larvae appear in March and stay until September.

The eggs density reached its maximum on May 15th, 2017, showing 1431 eggs/sample. The eggs are absent during December and January. In April, emerged larvae will take refuge in the most diverse shelters (P. scarabaeoides cubicles, anfractuosities crevices in the branches...) where they will continued their development.

Nymphs' density attained its maximum on June 15th, 2017, showing 1110 nymphs/sample. No nymphs were occurred during the period of December (0 nymphs/sample).

Adult’s density was highest on July 15th, 2017 with a value of 408 adults/sample. Lowest adults’ population of was observed during March 15th, 2016 with a mean value of 73 adults/sample.

However, the lowest scale population is noted in winter, when is consists essentially with old individuals that are more resistant to hard conditions of winter. Furthermore, the seasonal behavior of P. pollini populations is more favored by the spring and autumn conditions.

The Student t test applied to samples gives non-significant difference between the two years of sampling, since the populations have the same variations from one year to another.

The results of applying the age–structure technique to the seasonal abundance data of P. pollini obtained from the Zaghoun biotope over the 2 years indicated the occurrence of two generations per year. These two generations can be named as autumn–winter, spring and summer generations.

These findings agree with the results of Alexandrakis (1980). He stated that, there were two annual generations, the crawlers of the first (and larger) being present in March–April and those of the second in August–October.

We distinguish two generations per year. The first begins in March and ends at the end of June, lasts only about four months, has more staff and confused stage. However, the second generation starts from the month of August, having smaller staff.

Overwintering of P. pollini is exclusively in the form of adult female. These observations agree with those reported by Alexandrakis (1980) in Greece, Ertem and Pehlivan (1996) in Izmir (Turkey), Ahmed (2012) in Egypt and Menzer et al. (2016) in Algeria.

The generation number of P. pollini is probably under the influence of climatic conditions. Thus, in Spain the second generation is considered accidental. By cons, in the area of south Sicily (Italy), cochineal is monovoltine (Liotta and Sammartano 1981) and would biennial in Verona the north (Arambourg 1964).

Unlike Lepidosaphes flava seeking the shade of the tree (Biche and Bourahla 1993), and like Aonidiella aurantii (Campos-Rivela 2012), P. pollini seems exhibit positive phototropism. The cochineal tends to move towards the outer canopy for the sun-exposed areas, which confirms the results of Mahmouche (1992). Indeed, the highest rates were noted in south (28.6%) and East (20.7%) of the tree. Other orientations are less populated by cochineal, much less in the center of the tree that displays a maximum rate of 13.1% observed during the second year of sampling (Fig. 2).

The distribution of cochineal on the host plant is not solely related to sun exposure. But it seems that the host plant acts as an ecological factor associated with climatic conditions (Schvester 1956).

The results indicate the absence of P. pollini parasitoids. These results confirm those of Ahmed (2012).

The inventory of natural enemies in the study area indicates the presence of six predator species likely to attack P. pollini.

The presence of predators remained low until late spring and gradually increased until late summer, reaching a maximum number 44 individuals per sample (At the end of July and beginning of August). The increase in the number of predators essentially coincides with the rate of emergence of young mobile larvae.

Argyriou et al. (1976) stated that chrysopids are the most abundant generalist predators in olive orchards. They are active from late spring to late autumn and contribute to control of important olive pests as scales.

Despite biological diversity of these predators, their activity is very important in the spring and summer, unfortunately their action in biological control remains difficult to assess (Jarraya, 2003).

In the spring, the young larvae invade the cubicles caused by olive bark beetle P. scarabaeoides, where they are protected from climatic hazards and pesticides. However, P. scarabaeoides damage depend on climatic conditions especially drought. The weakened trees suffering from water stress are the most affected by the attacks of the two pests P. pollini and P. scarabaeoides. The observations obtained unequivocally indicate that: more damage caused by olive bark beetle is important, more P. pollini infestation is severe. This is confirmed by the positive established correlation (R2 = 0.877) (Fig. 3).

The cochineal P. pollini evolves in two generations per year. Overwintering as fertilized females’ wich prefers to settle in the sunniest places.

The presence of predators is low, five species of Coccinellidae family and one Neuroptera, C. carnea. Despite this biological diversity of predators, their action in biological control remains to elucidate. The observations reveled also a strong relationship between damage caused by olive bark beetle and P. pollini infestation.

Overall, our findings may provide important background in the future during the development of integrated pest management strategy against P. pollini. Further new studies should be oriented to understand the role of different antagonists in the regulation of P. pollini populations.

Rexhep U (1990) Morphological and bioecological study and parasitism of two olive scales of Pollinia pollini (Costa) and Leucaspis riccae Targ. In Greece and Albania. Ph.D. Thesis, Agricultural University of Athens, 167.