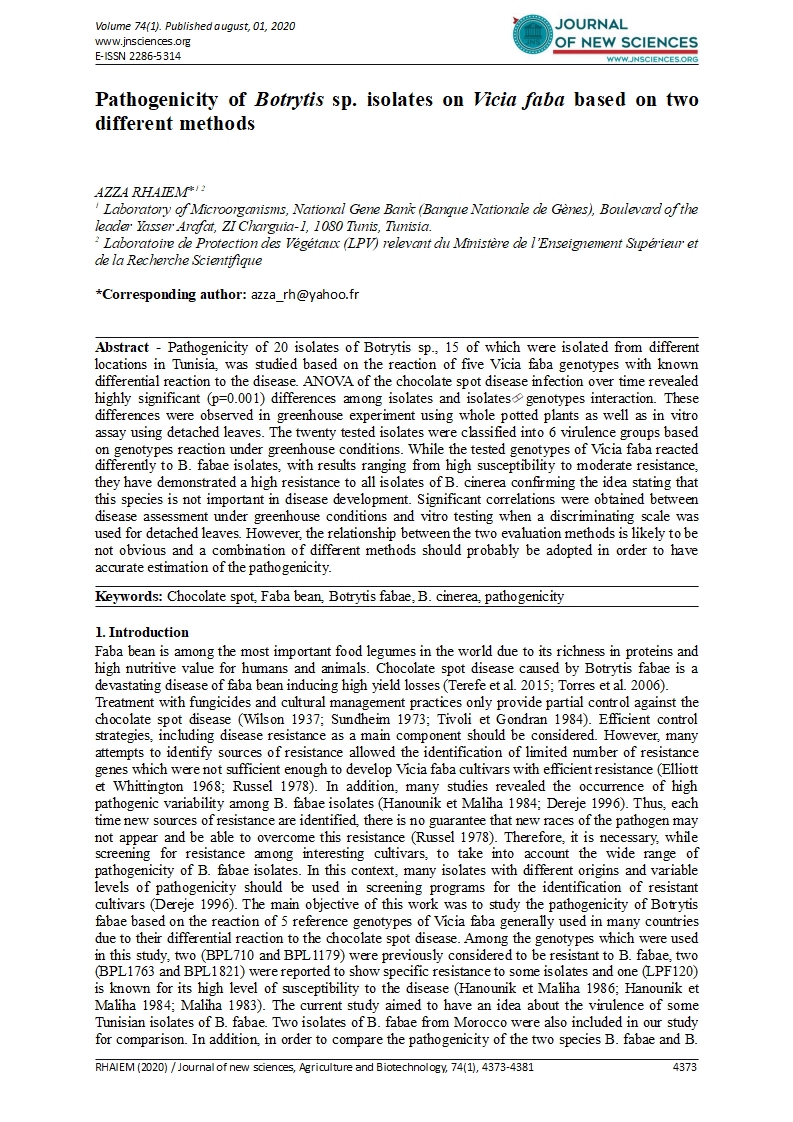 Abstract - Pathogenicity of 20 isolates of Botrytis sp., 15 of which were isolated from different locations in Tunisia, was studied based on the reaction of five Vicia faba genotypes with known differential reaction to the disease. ANOVA of the chocolate spot disease infection over time revealed highly significant (p=0.001) differences among isolates and isolatesgenotypes interaction. These differences were observed in greenhouse experiment using whole potted plants as well as in vitro assay using detached leaves. The twenty tested isolates were classified into 6 virulence groups based on genotypes reaction under greenhouse conditions. While the tested genotypes of Vicia faba reacted differently to B. fabae isolates, with results ranging from high susceptibility to moderate resistance, they have demonstrated a high resistance to all isolates of B. cinerea confirming the idea stating that this species is not important in disease development. Significant correlations were obtained between disease assessment under greenhouse conditions and vitro testing when a discriminating scale was used for detached leaves. However, the relationship between the two evaluation methods is likely to be not obvious and a combination of different methods should probably be adopted in order to have accurate estimation of the pathogenicity.

Faba bean is among the most important food legumes in the world due to its richness in proteins and high nutritive value for humans and animals. Chocolate spot disease caused by Botrytis fabae is a devastating disease of faba bean inducing high yield losses (Terefe et al. 2015; Torres et al. 2006).

Treatment with fungicides and cultural management practices only provide partial control against the chocolate spot disease (Wilson 1937; Sundheim 1973; Tivoli et Gondran 1984). Efficient control strategies, including disease resistance as a main component should be considered. However, many attempts to identify sources of resistance allowed the identification of limited number of resistance genes which were not sufficient enough to develop Vicia faba cultivars with efficient resistance (Elliott et Whittington 1968; Russel 1978). In addition, many studies revealed the occurrence of high pathogenic variability among B. fabae isolates (Hanounik et Maliha 1984; Dereje 1996). Thus, each time new sources of resistance are identified, there is no guarantee that new races of the pathogen may not appear and be able to overcome this resistance (Russel 1978). Therefore, it is necessary, while screening for resistance among interesting cultivars, to take into account the wide range of pathogenicity of B. fabae isolates. In this context, many isolates with different origins and variable levels of pathogenicity should be used in screening programs for the identification of resistant cultivars (Dereje 1996). The main objective of this work was to study the pathogenicity of Botrytis fabae based on the reaction of 5 reference genotypes of Vicia faba generally used in many countries due to their differential reaction to the chocolate spot disease. Among the genotypes which were used in this study, two (BPL710 and BPL1179) were previously considered to be resistant to B. fabae, two (BPL1763 and BPL1821) were reported to show specific resistance to some isolates and one (LPF120) is known for its high level of susceptibility to the disease (Hanounik et Maliha 1986; Hanounik et Maliha 1984; Maliha 1983). The current study aimed to have an idea about the virulence of some Tunisian isolates of B. fabae. Two isolates of B. fabae from Morocco were also included in our study for comparison. In addition, in order to compare the pathogenicity of the two species B. fabae and B. cinerea and their ability to induce chocolate spot typical symptoms, 4 isolates of B. cinerea were also included. In fact, the pathogenicity of the two species and their ability to induce chocolate spot symptoms have been subject to many controversies. Generally, B. fabae is considered to be the main causal agent of the disease, whereas B. cinerea is often considered to be secondary (Harrisson 1984). Some reports stated that B. fabae is more pathogenic than B. cinerea. More frequently, we agree to admit that both B. fabae and B. cinerea may induce the same typical chocolate spot symptoms but only B. fabae can lead to the aggressive stage under natural conditions (Hashim et al. 1997). Different evaluation methods, including the assessment of infected leaves, the extent of necrosis, the diseased leaf area or the number of lesions may be adopted (Tivoli et al. 1986).

Leaves of Vicia faba showing typical chocolate spot symptoms were collected from different locations in Tunisia. Small pieces of 1-2 mm² in surface were cut from the lesions and deposited onto Water-Agar medium after surface disinfection with 3% Sodium Hypochlorite and incubated at 20±2°C. Purified cultures were transferred to Potato-Dextrose-Agar medium (PDA). Additional reference isolates from Tunisia, France and Morocco were also included in this study. All isolates were single-spored (Onfroy 1997) and maintained on PDA and Malt extract media after developing typical sclerotia. Inoculum was prepared by cultivating single-spored isolates on Faba bean-Leaf-Dextrose-Agar (FLDA) (Tivoli et al. 1986), incubating them under a cycle of 12h darkness and 12h near ultraviolet light UV light and a temperature of 202°C. Spore suspensions were prepared from 14-days old cultures and concentrations were adjusted to 5105 spores/ml for each isolate. Only small lesions corresponding to the aggressive stage of infection were selected for isolating the pathogen. Widely spread lesions were avoided to minimize the risk of isolating saprobes, particularly B. cinerea. In fact, the latter may develop on primary lesions caused by B. fabae and can often be isolated and mistaken for being the causal agent (Harrisson 1984). B. fabae isolates were checked based on their growth and morphological characters as described by Onfroy (1997).

Five genotypes, BPL710 and BPL1179 from Ecuador (Hanounik et Robertson 1996), BPL1821 and BPL1763 from Ethiopia (Dereje 1996) and LPF120 with unknown origin, were used. Seeds were sown in plastic pots under greenhouse conditions at 5 seeds/pot and 3 pots were used as replicates for each genotype. Thus, 15 plants per genotype and 75 plants per isolate were considered. The experiment, consisting of a total of 1500 plants, was organized according to a completely randomized factorial plot with 3 replicates. Inoculation was performed on 3-weeks-old seedlings using spore suspensions of each isolate of either B. fabae or B. cinerea. Pots were kept in the greenhouse under a temperature of 202°C, and individually covered with plastic bags to ensure high humid conditions more favorable for initiation and development of infection. Disease was scored 5, 12 and 19 days after inoculation using a 0-9 scale for disease assessment on leaves (Ding et al. 1993). The classification of the different genotypes regarding their resistance, from highly resistant (HR) to highly susceptible (HS) was based on mass disease index (MDI) (Ding et al. 1993).

Following disease initiation in pots under greenhouse conditions, 6 leaflets per genotype and per isolate were detached from the 9nth node of the plants 14 days after inoculation. All selected leaves were at the first stage of infection (1 with the scale) corresponding to the presence of only few chocolate spot dots covering less than 5% of the leaf surface. Detached leaves were surface cleaned with sterile distilled water, dried between two layers of sterile filter paper then placed in Petri dishes containing sterile filter paper humidified with 10 ml of sterile distilled water. Petiols uniting the two leaflets were longitudinally cut to avoid interactions between leaflets of the same leaf. A piece of sterile cotton humidified with sterile distilled water was placed onto petiols end in order to maintain their turgidity state and prevent an eventual dryness (Hashim et al. 1997; Khalil et Harrisson 1981). Three leaflets were deposited per plate and two replicates (2 plates) were adopted according to a completely randomized factorial plot with two factors. Plates were incubated at 202°C and disease assessment on detached leaves was performed 24, 48 and 96h later according to a 1-4 scale adopted for detached leaves (Hanounik et Maliha 1986). Mean disease indexes on detached leaves (IMF) were calculated. The infected leaf surface was assessed 120h after incubation, by determining the leaf surface covered by the disease spots, using an area-measurement system (At-Delta-T. Devides; Durevell, Cambridge, England).

Data collected from the two performed experiments were subject to statistical analysis using the STATISTICA computer statistical package (Statsoft France 1997, Maisons-Alfort, France). ANOVA was applied to each of the disease indexes at different dates either on the whole plants in the grennhouse or on detached leaves. Means were separated using the Least Significant Difference (LSD) Test. Correlations between disease assessment from the two assays were also determined.

Sixteen single-spored isolates of B. fabae and 4 of B. cinerea were selected based on their growth and morphological features which were consistent with those stated by Onfroy (1997) (Table 1).

On PDA and Malt extract media, B. fabae isolates presented thin, flush, slow-growing mycelia starting in locks, while B. cinerea isolates have rather aerial and loose rapid-growing mycelia with regular start. On FLDA medium, conidiophores of B. fabae were tight with dense sporulation while those of B. cinerea were loose with diffuse sporulation. ², developing on Malt extract and PDA media were smaller (1-1.7 mm) and more abundant for B. fabae isolates while they were quiet absent or very few but larger in size (2-5 mm) for B. cinerea. Conidia of B. fabae were clearly less abundant and larger in size (16-25  13-16) than those of B. cinerea (8-14  6-9). In addition, Conidiophores of B. cinerea presented more ramifications than those of B. fabae (Figure 1A-B).