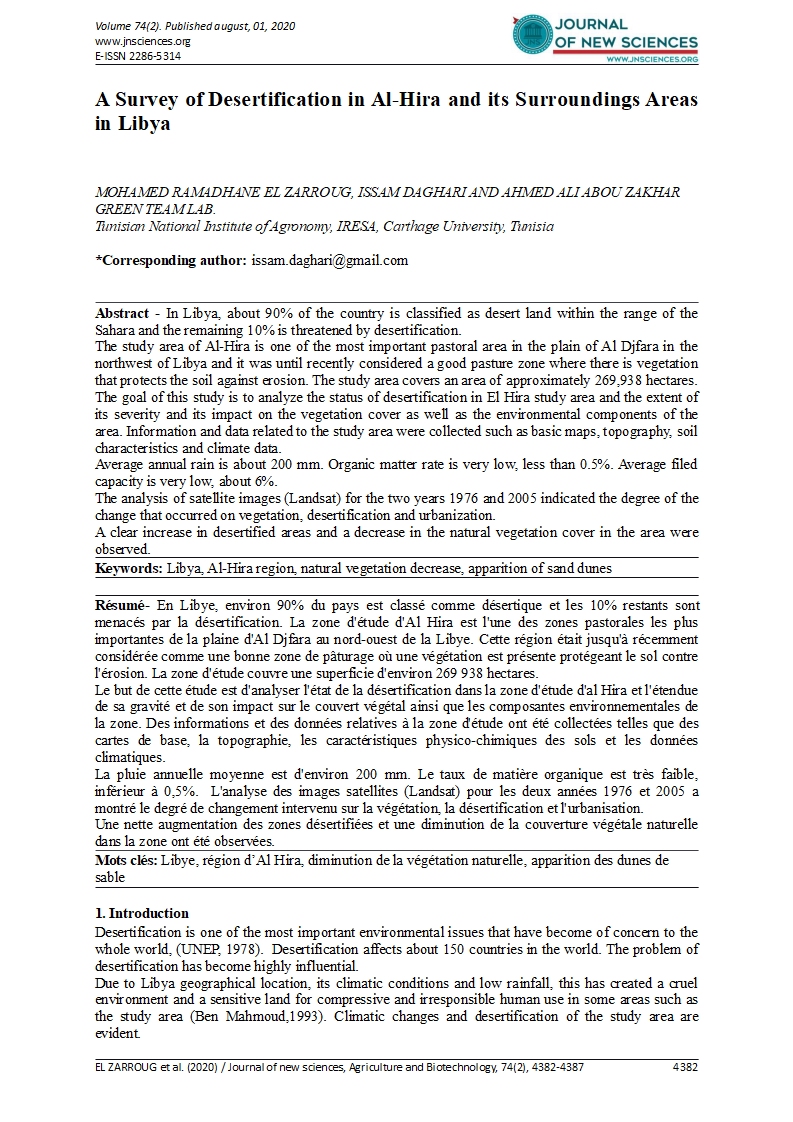 Abstract - In Libya, about 90% of the country is classified as desert land within the range of the Sahara and the remaining 10% is threatened by desertification. The study area of Al-Hira is one of the most important pastoral area in the plain of Al Djfara in the northwest of Libya and it was until recently considered a good pasture zone where there is vegetation that protects the soil against erosion. The study area covers an area of ​​approximately 269,938 hectares. The goal of this study is to analyze the status of desertification in El Hira study area and the extent of its severity and its impact on the vegetation cover as well as the environmental components of the area. Information and data related to the study area were collected such as basic maps, topography, soil characteristics and climate data. Average annual rain is about 200 mm. Organic matter rate is very low, less than 0.5%. Average filed capacity is very low, about 6%. The analysis of satellite images (Landsat) for the two years 1976 and 2005 indicated the degree of the change that occurred on vegetation, desertification and urbanization.A clear increase in desertified areas and a decrease in the natural vegetation cover in the area were observed.

Desertification is one of the most important environmental issues that have become of concern to the whole world, (UNEP, 1978). Desertification affects about 150 countries in the world. The problem of desertification has become highly influential.

Due to Libya geographical location, its climatic conditions and low rainfall, this has created a cruel environment and a sensitive land for compressive and irresponsible human use in some areas such as the study area (Ben Mahmoud,1993). Climatic changes and desertification of the study area are evident.

The study area is a semi-dry area with sensitive soil and prevailing climatic conditions made it a pasture area for long periods (Hamza, 2006). The present study aims to identify the dimensions of one of the environmental problems of desertification in El Hira area.

The study area of Al-Hira is located in the northwest of Libya (Tab.1), south of the city of El Azizia. The study area covers an area of​​approximately 269,938 hectares.

2.1.1 Geomorphology of the study area

The study area is located in the Al Djfara plain wish is divided into three parts: the coastal strip that extends from the seashore to a distance ranging from 10-20 km to the south and is covered by the sediments of the fourth era, represented by both the composition of Gargarsh and the composition of the Al Djfara formation. The coastline follows the south of the central part of the plain, which is covered by sediments of the formation of Al Djfara and sand dunes with the emergence of some hills forming El Azizia especially around the city of El Azizia and the width of this part ranges between 60 to 90 km and rise from sea level 100 meters and overlaps to the south with the third part of the Al Djfara plain, which represents the last part of Mount Nafusa and is covered by gravel sediments of varying degrees.

The Al Djfara plain covers sediments between the Mesozoic and the fourth era, as well as the presence of volcanic rocks in the form of overlaps, basalts. The study area is covered by the composition of El Azizia. The composition of El-Aziziyah consists mainly of gray dolmitic limestone with some delicate interventions of marl, clay, flint lenses and tubers. The upper part of the composition is observed as thin phosphate overlays above sandstone interventions. The Al Djfara plain can be divided into two geological parts:

The northern part of El-Azizia: It is characterized by the presence of Eocene layers which increase as we head north. The thickness of the quadrilateral layers is about 600 meters along the coast where sand is formed with overlays of clay. Jawaris is located in the western part of the area and it is located directly above the upper sandy Cretaoui rocks in the eastern part.

The southern part extending from El Azizia to the southern boundary of the plain: the quadrilateral rocks are characterized by their small thickness falling over the upper jars rocks, which consist of an exchange between sandy rocks, intermingled with clay, limestone and dolomite in the southwestern part, and the evaporative jawars of the central west and Triassic, dolomite limestone in the middle part and finally the sandstone of the lower Cretaceous era in the eastern part.

The study area is within the scope of the El Azizia Meteorological Station. The available data include climatic information for temperature, relative humidity, rain, atmospheric pressure and surface winds for the period 1946-2006.

The temperature in the study area is influenced by several factors, including the location for latitude and terrain. El Azizia is characterized by high temperatures in summer. The average annual air temperature is 26 ° C.

The average annual rainfall is very low, varying between 200 and 250 mm for the study area. In fact, the amount of rain for any month does not indicate the reality associated with precipitation may fall torrential rain in a month and then pass several years without a drop of water and rain is characterized by its local nature, where it does not fall in the whole region.

The most important winds with an average speed more than 3 m/s, that dominate the study area are southern winds blowing from the desert, especially in the spring, autumn and early winter. These winds cause a sudden rise in temperature and a rapid decrease in relative humidity in the study area.

All these combined to make the granules of the soil alone and non-contiguous, which makes its weight light and prone to transport by wind, which leads to desertification of the region and we note the presence of sand dunes in the region is only a result.

Soil samples were analyzed and physical and chemical properties that have an impact on the ability of the soil to resist desertification.

Soil samples (10 profiles) were collected during August 2007 according to the specific location of the study area. Soil samples were taken and the area was divided into 10 squares and from a depth of 0-30 cm. The samples in the designated bags were numbered and the date of the sample was taken and then taken to the soil analysis laboratory of the artificial great Libyan river authority. Soil samples were taken in the aim to determine soils characteristics as:

Due to Libyan political conditions during the last years, it was impossible to consider more recent date and also doing any field experimentations.

Updating the data and information on which the study relied. The methods of collecting, analyzing and presenting them varied according to the following:

The study included a series of field visits to identify the specificities of the region and its deterioration, especially wind and water effects as well as the encroachment of sand dunes and the status of vegetation and the extent of exposure to plants and the study of some of these plants and the possibility of their return to the previous reality from the analysis of satellite images have been taken. Photographs show desertification in general and the extent of sand dunes in the region.

Sand dunes are sandy clusters of different shapes and their height ranges from 30 cm to more than 100 meters and is the result of wind and sand transported (Sultan Hamza, 2006). There are many forms of sand dunes on the limits of the road link between El Azizia and Gharyan cities where the height ranges from43 cm to 90 cm and many of these roads were closed by long dunes. It extends with the direction of the wind and these dunes are located on the limits of roads and sand dunes are scattered in the study area where take many forms and ranges from a height of 50 cm to 71 cm and a length between 13 meters and 460 meters approximately.