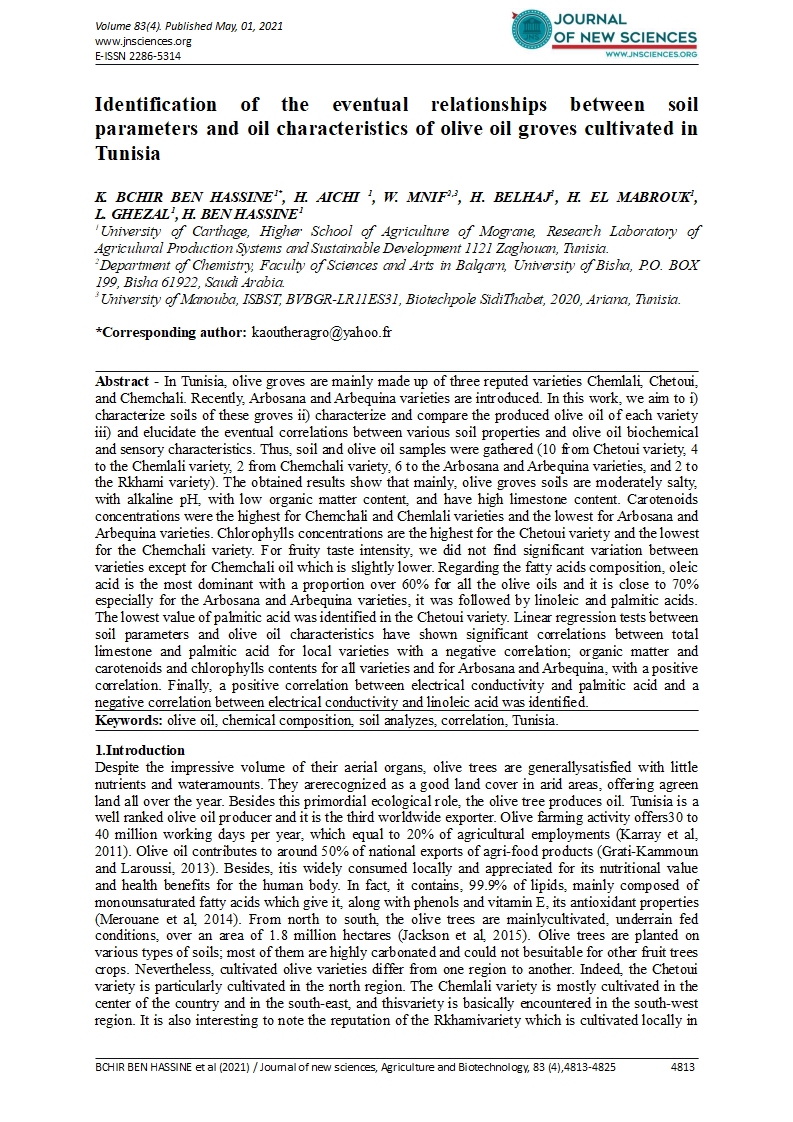 Abstract - In Tunisia, olive groves are mainly made up of three reputed varieties Chemlali, Chetoui, and Chemchali. Recently, Arbosana and Arbequina varieties are introduced. In this work, we aim to i) characterize soils of these groves ii) characterize and compare the produced olive oil of each variety iii) and elucidate the eventual correlations between various soil properties and olive oil biochemical and sensory characteristics. Thus, soil and olive oil samples were gathered (10 from Chetoui variety, 4 to the Chemlali variety, 2 from Chemchali variety, 6 to the Arbosana and Arbequina varieties, and 2 to the Rkhami variety). The obtained results show that mainly, olive groves soils are moderately salty, with alkaline pH, with low organic matter content, and have high limestone content. Carotenoids concentrations were the highest for Chemchali and Chemlali varieties and the lowest for Arbosana and Arbequina varieties. Chlorophylls concentrations are the highest for the Chetoui variety and the lowest for the Chemchali variety. For fruity taste intensity, we did not find significant variation between varieties except for Chemchali oil which is slightly lower. Regarding the fatty acids composition, oleic acid is the most dominant with a proportion over 60% for all the olive oils and it is close to 70% especially for the Arbosana and Arbequina varieties, it was followed by linoleic and palmitic acids. The lowest value of palmitic acid was identified in the Chetoui variety. Linear regression tests between soil parameters and olive oil characteristics have shown significant correlations between total limestone and palmitic acid for local varieties with a negative correlation; organic matter and carotenoids and chlorophylls contents for all varieties and for Arbosana and Arbequina, with a positive correlation. Finally, a positive correlation between electrical conductivity and palmitic acid and a negative correlation between electrical conductivity and linoleic acid was identified.