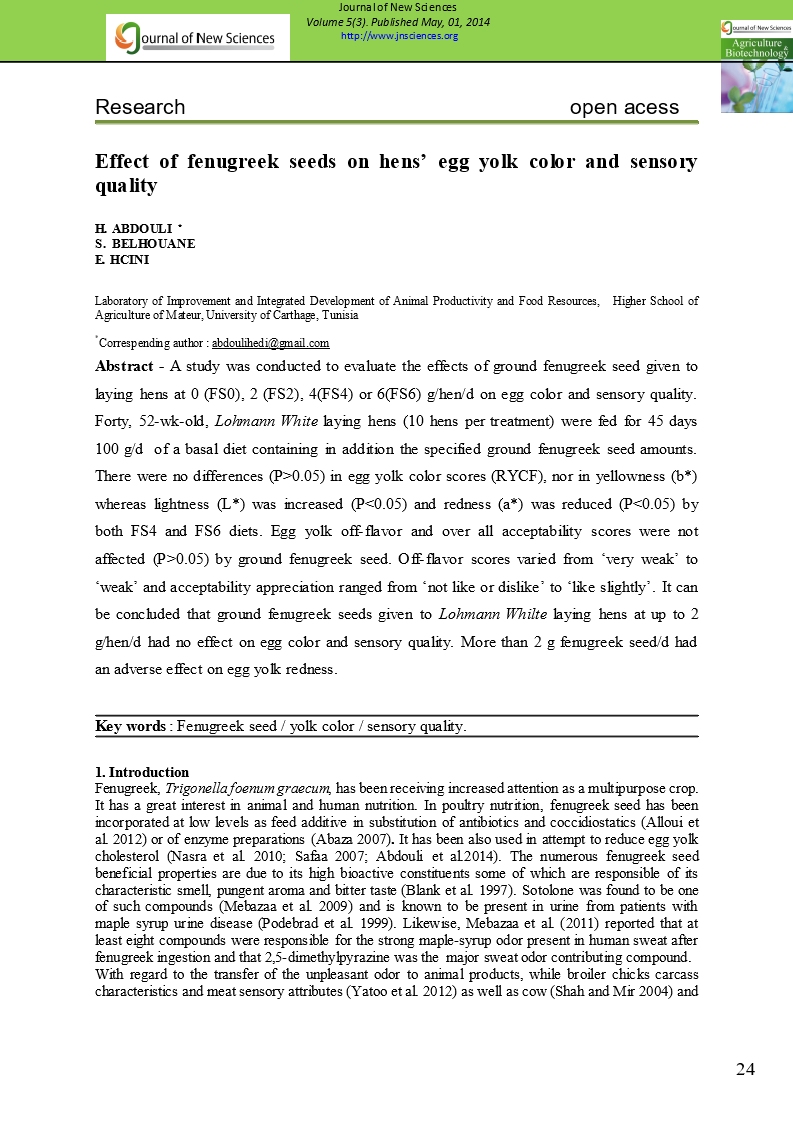 Laboratory of Improvement and Integrated Development of Animal Productivity and Food Resources, Higher School of Agriculture of Mateur, University of Carthage, Tunisia

Abstract - A study was conducted to evaluate the effects of ground fenugreek seed given to laying hens at 0 (FS0), 2 (FS2), 4(FS4) or 6(FS6) g/hen/d on egg color and sensory quality. Forty, 52-wk-old, Lohmann White laying hens (10 hens per treatment) were fed for 45 days 100 g/d of a basal diet containing in addition the specified ground fenugreek seed amounts. There were no differences (P>0.05) in egg yolk color scores (RYCF), nor in yellowness (b*) whereas lightness (L*) was increased (P<0.05) and redness (a*) was reduced (P<0.05) by both FS4 and FS6 diets. Egg yolk off-flavor and over all acceptability scores were not affected (P>0.05) by ground fenugreek seed. Off-flavor scores varied from ‘very weak’ to ‘weak’ and acceptability appreciation ranged from ‘not like or dislike’ to ‘like slightly’. It can be concluded that ground fenugreek seeds given to Lohmann Whilte laying hens at up to 2 g/hen/d had no effect on egg color and sensory quality. More than 2 g fenugreek seed/d had an adverse effect on egg yolk redness.

Fenugreek, Trigonella foenum graecum, has been receiving increased attention as a multipurpose crop. It has a great interest in animal and human nutrition. In poultry nutrition, fenugreek seed has been incorporated at low levels as feed additive in substitution of antibiotics and coccidiostatics (Alloui et al. 2012) or of enzyme preparations (Abaza 2007). It has been also used in attempt to reduce egg yolk cholesterol (Nasra et al. 2010; Safaa 2007; Abdouli et al.2014). The numerous fenugreek seed beneficial properties are due to its high bioactive constituents some of which are responsible of its characteristic smell, pungent aroma and bitter taste (Blank et al. 1997). Sotolone was found to be one of such compounds (Mebazaa et al. 2009) and is known to be present in urine from patients with maple syrup urine disease (Podebrad et al. 1999). Likewise, Mebazaa et al. (2011) reported that at least eight compounds were responsible for the strong maple-syrup odor present in human sweat after fenugreek ingestion and that 2,5-dimethylpyrazine was the major sweat odor contributing compound.

With regard to the transfer of the unpleasant odor to animal products, while broiler chicks carcass characteristics and meat sensory attributes (Yatoo et al. 2012) as well as cow (Shah and Mir 2004) and goat (Al-Shaikh 2007) milk have been found to be insensitive to fenugreek seed feeding, no study has been reported on the effect of fenugreek seed on hens’ egg taste.

In view of the well known transfer of many bioactive compounds introduced into the poultry feed to egg yolk (Benakmoum et al. 2013; Narahari et al. 2005) and the fact that egg yolk color and taste are key criteria of choice for consumers, the objective of this study was to investigate the effect of feeding hens various amounts of fenugreek seed on egg yolk color and sensory quality.

The details of the experimental design have been reported (Abdouli et al. 2014). Briefly, forty Lohmann White laying hens (52wk-old) were divided at random into four treatment groups with 10 birds each and were allocated to one of the following four dietary treatments: 100 g of a basal diet made of yellow corn (630/kg), soybean meal (250g/kg), calcium carbonate (80g/k) and a minerals and vitamins mixture (40g/g) or 100 g the basal diet and 2, 4 or 6 g ground fenugreek seeds /bird /day. The treatments were referred to as FS0, FS2, FS4 or FS6, respectively. Fenugreek seed was finely ground to powder and weekly blended in the adequate proportions with the basal diet. The experimental period lasted 45 days and was preceded by an adaptation period of 8 days during which birds received the basal diet.

The eggs laid during days 43 to 45 of the experimental period were used for analysis of egg yolk color and sensory evaluation.

Yolk color was determined by 1) sight using the Yolk Colour Fan® scale (Roche ) where color was scored according to its intensity (1 for light yellow; 15 for orange) by two persons and the final value was calculated as the average of the two values measured; and 2) using a Konica Minolta Chroma Meter CR-410 which allows determination of L* (lightness), a* (redness) and b*(yellowness). The instrument was set perpendicular to the egg yolk in a Petri dish. The parameters L*, a* and b* were performed two times and the final values were calculated as the averages of the two corresponding values measured.

Sensory evaluation was conducted on eggs boiled for 15 min, peeled, wrapped in food foil, put in plastic containers and kept in water at around 35° C to keep them warm until they were served to the panelists. These were students willing to consume eggs and had no allergies to them. During the sensory evaluation of the eggs, each panelist was given four peeled eggs randomly placed and labeled using three digit randomized numbers. Panelists were asked to evaluate the eggs after cutting them in halves and water was offered for rinsing the mouth between samples. The panelists were asked to masticate and swallow the egg yolk, and to score a) the presence of any off-flavors on a 7-point scale (from absent =0 to very strong =6); and b) the overall acceptability, i.e. their dislike or like on a 7-point scale (from dislike extremely=0 to like extremely=6).

The experiment was a completely randomized design with each egg tested as the experimental unit. Collected data were subjected to analysis of variance using the GLM procedure (SAS, 1989). Orthogonal contrasts and multiple comparison tests were performed among treatments.

Egg yolk color traits are shown in table 1. Egg yolk color scores determined by the Yolk Color Fan® scale (RYCF) and yellowness (b*) determined by Konica Minolta Chroma Meter CR-410 were not influenced (P>0.05) by fenugreek seed powder addition. RYCF scores varied from 6.15 (FS6) to 7.0 (FS2) and parameter b* ranged from 32.56 (FS0) to 36.03 (FS4). These results indicated that the yolk contained similar concentrations of color pigments and was of the same yellowness. This can be explained by the fact that yellow corn was the main ingredient source of pigments in the diets and that the amounts of added fenugreek seed powder did not supply enough pigments to influence egg yolk yellowness. It is known that egg yolk color is influenced mostly by the diet and that yellow corn is the main color source in hens’ conventional diet. RYCF and yellowness (b*) scores obtained in this study were close to the ones (RYCF=8.64, b*=36.75) reported by Lokaewmanee et al. (2010) for eggs from 25-old Charoen Pokphand brown laying on yellow corn (55.67%) basal diet. In this same study, paprika (a red xanthophylls source) and paprika plus marigold (a yellow xanthophylls source) flower extracts increased RYCF scores to 11.47 and 12.17 and b* values to 42.12 and 46.73, respectively. The authors considered only the RYCF score due paprika plus marigold flower extracts as optimal because it corresponded to the red yolk color preferred by consumers.

In the present study, while RYCF and b* values were insensitive to fenugreek seed feeding, lightness (L*) and redness (a*) were affected (P<0.05) by fenugreek addition. Lightness was increased (P<0.05) from 63.9 to 66.0 for both FS4 and FS6 diets. Even though the increase was small, it was suggested that egg yolk structure was modified so that light reflectance was increased. Redness was reduced (P<0.05) from 2.66 for FS0 to 1.94 for FS4 and 1.59 for FS6. Such an effect suggested that the 4 and 6 g GFS given daily to the hens provided enough compounds that reduced egg yolk redness. Compared to reported increased L* and decreased a* values due to either paprika or paprika plus marigold flower extracts (Lokaewmanee et al. 2010; Niu et al. 2008), our results suggested an adverse effect on egg yolk color of more than 2 g fenugreek seed /day. Overall L*, a* and b* values in the current study were in the range of the ones reported by Dvorak et al. (2009) for eggs from layers of Isa Brown breed and aged 51-80 weeks for which L* ranged from 43.42 to 68.51, a* ranged from 0.05 to 13.49 and b* ranged from 22.38 to 48.18.

In the current study, egg yolk off-flavor and over all acceptability scorers are shown in table 2. Feeding diets containing ground fenugreek seeds had no effect (P>0.05) on panelists’ scores of these sensory eggs quality. Off-flavor scorers ranged from 0.7 for FS0 to 1.7 for FS6 corresponding to a ‘very weak’ and ‘weak’ off-flavor, respectively. Acceptability scores ranged from 4.0 for FS0 to 3.3 for FS6 corresponding to ‘like slightly’ and ‘not like nor dislike’ appreciations, respectively. These data showed that even though panelists did not differentiate between eggs, they tended to perceive a weak off-flavor in hens’ eggs fed 6g ground fenugreek seeds/day. The sensory evaluation of eggs from hens fed fenugreek seeds has not been reported before, limiting the possibility of comparing data. However, it was suggested that aromatic compounds in the fenugreek seed were not conveyed into the eggs. As far as other products used for eggs enrichment are concerned, eggs showed slight off-flavor or fishy flavor when hens were fed with linseed (Caston et al. 1994) or flax seed at levels of 15-20% of the diet (Ferrier et al. 1994; cited by Singh et al. 2012).