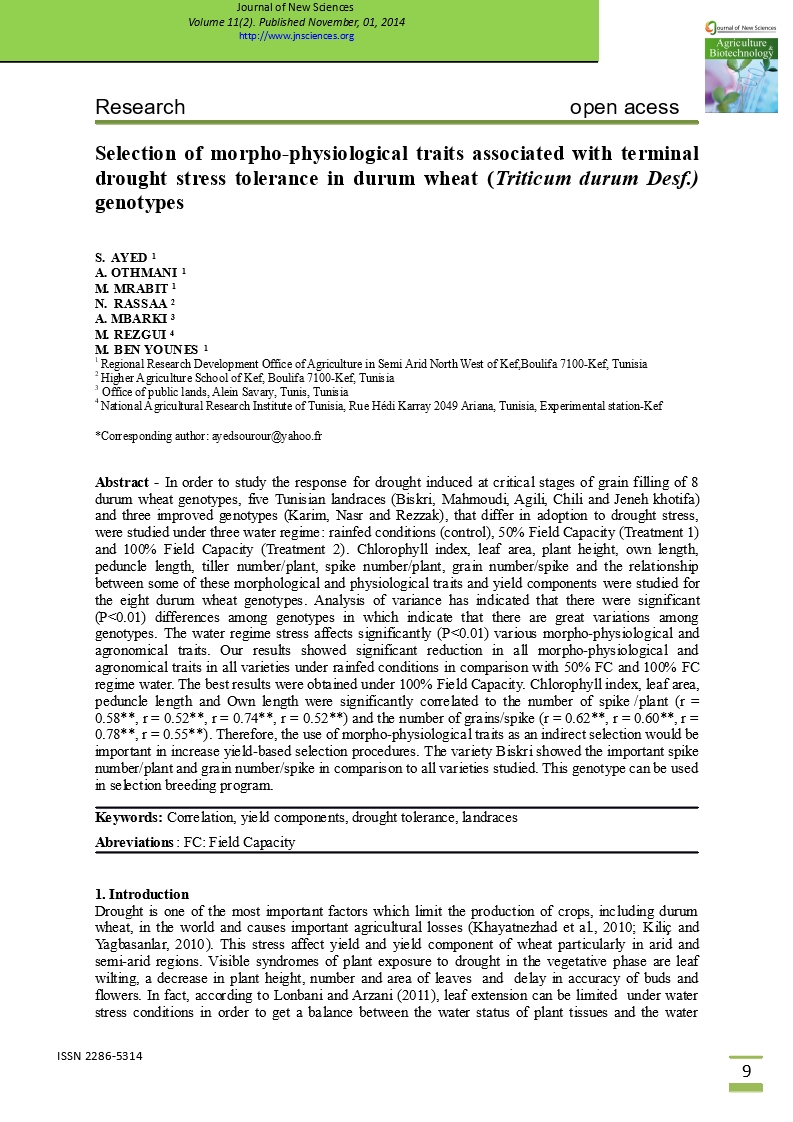 Abstract - In order to study the response for drought induced at critical stages of grain filling of 8 durum wheat genotypes, five Tunisian landraces (Biskri, Mahmoudi, Agili, Chili and Jeneh khotifa) and three improved genotypes (Karim, Nasr and Rezzak), that differ in adoption to drought stress, were studied under three water regime: rainfed conditions (control), 50% Field Capacity (Treatment 1) and 100% Field Capacity (Treatment 2). Chlorophyll index, leaf area, plant height, own length, peduncle length, tiller number/plant, spike number/plant, grain number/spike and the relationship between some of these morphological and physiological traits and yield components were studied for the eight durum wheat genotypes. Analysis of variance has indicated that there were significant (P<0.01) differences among genotypes in which indicate that there are great variations among genotypes. The water regime stress affects significantly (P<0.01) various morpho-physiological and agronomical traits. Our results showed significant reduction in all morpho-physiological and agronomical traits in all varieties under rainfed conditions in comparison with 50% FC and 100% FC regime water. The best results were obtained under 100% Field Capacity. Chlorophyll index, leaf area, peduncle length and Own length were significantly correlated to the number of spike /plant (r = 0.58**, r = 0.52**, r = 0.74**, r = 0.52**) and the number of grains/spike (r = 0.62**, r = 0.60**, r = 0.78**, r = 0.55**). Therefore, the use of morpho-physiological traits as an indirect selection would be important in increase yield-based selection procedures. The variety Biskri showed the important spike number/plant and grain number/spike in comparison to all varieties studied. This genotype can be used in selection breeding program.

Drought is one of the most important factors which limit the production of crops, including durum wheat, in the world and causes important agricultural losses (Khayatnezhad et al., 2010; Kiliç and Yagbasanlar, 2010). This stress affect yield and yield component of wheat particularly in arid and semi-arid regions. Visible syndromes of plant exposure to drought in the vegetative phase are leaf wilting, a decrease in plant height, number and area of leaves and delay in accuracy of buds and flowers. In fact, according to Lonbani and Arzani (2011), leaf extension can be limited under water stress conditions in order to get a balance between the water status of plant tissues and the water absorbed by plant roots (Passioura, 1996). In addition, Blum (2005) suggested that a small leaf area is beneficial under drought stress in order to avoid hydratation. Drought stress reduced the number of days to heading, plant height, number of spike per m², peduncle length, spike length, number of grains per spike, 1000 grain weight of genotypes (Kiliç and Yagbasanlar, 2010). Peduncle length has been also suggested as useful indicator of yield capacity in drought conditions. Kaya et al. (2002) have been found an important positive correlation between peduncle length and grain yield. However, in other studies, such relationship has been found inverser and no relationship depending on the environment (Villegas et al., 2006). In many part of the world, durum wheat production is replaced by modern cultivars and landraces are only cultivated by small farmers in very limited areas (Akar et al., 2009; Ahmadizadeh et al., 2011). Nowadays, several breeding programs aim to develop new cultivars as well as release old durum landraces (Ahmadizadeh et al., 2011). Landraces of durum wheat generally tolerant to biotic and abiotic stress have been grown under low-input or sustainable farming conditions where they produce reasonable yield.

The effect of deficit water on the yield and yield components of durum wheat at different growth stages have been noted by several authors (Simane et al., 1993; Solomon et al., 2003). However, no study had been conducted on the physiological and morphological response of diverse durum wheat tunisian genotypes to water deficit conditions. Therefore, the present study aims to determine water deficit effects of eight durum wheat genotypes and to determine the relationship between some morphological and physiological traits and yield under water deficit conditions.

Experiments were conducted at the experimental field of Higher Agriculture School of Kef during 2013/14 growing season. Five landraces (Biskri, Mahmoudi, Agili, Chili and Jeneh khotifa) and three improved genotypes (Karim, Nasr and Rezzak) were used in this study. Seeds of each genotype were sown in 5 lines 10 m long with an interline spacing of 20 cm. The experiment was laid out in randomized complete block design (RCBD) with three replications. The temperature and the rainfall from sowing to harvest are presented in Table 1.

Three levels of stress treatments including:

These water stress conditions were stimulated in grain filling stage.

Results of variance analysis showed that the effect of genotype, treatment and interaction between genotype and treatment were significant on 0.01 percentage levels for all traits studied (Table 2).

The water regime stress affects significantly (P<0.01) various morpho-physiological and agronomical traits in all genotypes. Our results showed significant reduction in all morpho-physiological and agronomical traits in all varieties under rainfed conditions in comparison with 50% FC and 100% FC regime water (Figure1). Same results were obtained by Ehdaie et al. (1991) in durum wheat. Since genotypic differences for these traits have been reported for various crop species including durum wheat, these traits have been used to identify drought tolerant genotypes in various crops. According our results, drought stress reduced all yield components (tiller number/plant, spike number/plant, grain number/spike) particularly the number of fertile spikes per plant and the number of grains per spike in almost studied genotypes. Same results were observed by Giunta et al. (1993) and Simane et al. (1993). Mirbahar et al. (2009) reported also that water stress caused a significant reduction in number of grains per spike in wheat in 25 varieties of bread wheat. In fact, according to El Hafid et al. (1998) drought leads to reducing inoculation of flower and this affects number of produced grain. Calderini et al. (1999) believed that increasing of grain yield in recent years is primarily indebted of increasing of number of grain per spike and this component of yield is more important than grain weight, although both factors cause limitation of yield. Significant reduction in 1000-grain weight of wheat has also been reported by Ahmed and Arian (1999) while Akram (2011) reported differential response of varieties toward grain weight. The water stress reduced the leaf area for all genotypes studied (Figure 1 B). Same finding were obtained by Boutraa et al. (2010). This author showed that deficit decreased leaf area in four wheat cultivars. In fact, the highest leaf area was found in the control plants of the 80% water regime, followed by the plants under 50% water regime, while leaf area of plants of the 30 % had the least leaf area. The comparison of all genotype for all traits showed that the genotype Biskri had the best spike number/plant and grain number/spike for all water regimes (Table 3).

Results showed that physiological traits (chlorophyll index and leaf area) were significantly correlated to the number of spike /plant (r = 0.58**, r = 0.52**) and the number of grains/spike (r = 0.62**, r = 0.60**). Peduncle length significantly correlated to traits related to the yield such as number of spike /plant (r = 0.74**) and the number of grains/spike (r = 0.78**) and tiller number (r = 0.61**) (Table 4). According to Bogale et al. (2011), peduncle length has been also suggested as useful indicator of yield capacity in dry environments. Kaya et al. (2002) have been found strong positive correlation between peduncle length and grain yield. Own length positively correlated to spike number /plant (0.52**) and grain number /spike (0.55**). According to the previous studies, there is a link between various physiological responses of crop plants to drought and their tolerance mechanisms (Keyvan, 2010; Datta et al., 2011). Association between all these character and yield components was observed particularly at anthesis stage. It is clear that all these parameters could explain some of the mechanisms which indicate tolerance to drought and help in understanding the physiological responses that enable plants to adapt to water deficit and maintain growth and productivity during stress period and indicate important of these traits in breeding programs for screening and selection of tolerant varieties.

All of these traits have directly or indirectly transfer their effects components of yield and these traits could be used as an indirect yield selection. Selection efficiency could be improved if particular physiological and/or morphological attributes related to yield under a stress environment could be identified and employed as selection criteria for complementing traditional plant breeding.