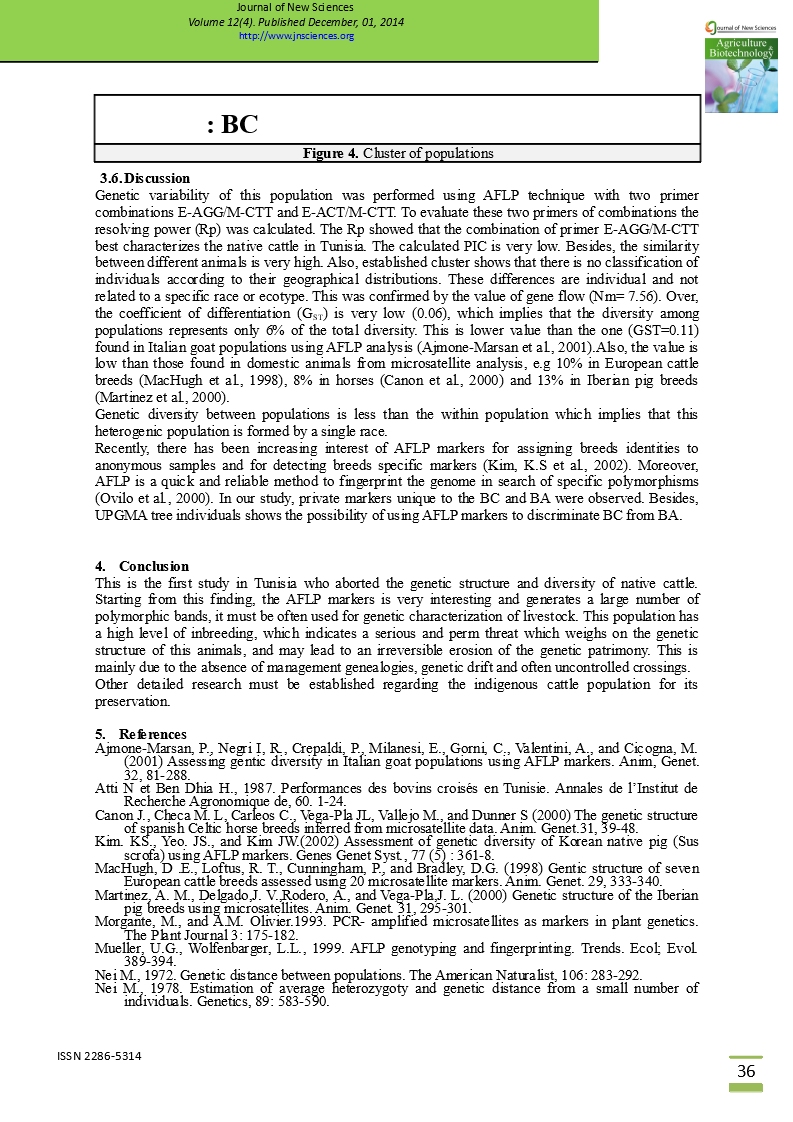 Abstract - The survey was conducted in North West Tunisia on 154 native cattle owners. Blood samples were collected so that genetic diversity can be studied. The study was based on 2 primers combinations. Amplified fragment length polymorphism (AFLP) was used to detect within and among population genetic diversity.

The polymorphism information content (PIC) was 0.31. The differentiation coefficient between populations (Gst) was 0.06. These results point toward that the main genetic variation was within the population (94%) and the remaining (6%) of the variation was among populations. The gene flow (Nm) was relatively high (7.56). These results show the dangerous situation in which native cattle are encountered.

The local cattle population in Tunisia is formed by two breeds “Blonde du cap bon” and “Brune de l’Atlas” was clustered into two branches based on the gray and the fawn one. This population is characterized by its hardiness (Atti et al., 1972). Besides, it constitutes a very important socio-economic element and contributes largely to food in rural areas. This population has gathered ability to adapt to the environment, food availability, the pathological contexts and modes of operation.

The morphological traits are greatly influenced by environment, thus diversity studies based on morphological traits are not reliable (Maryam M et al., 2010). DNA markers made possible a fast survey of genetic diversity and genetic structure (Xue et al., 2006). AFLP (Amplification fragment length polymorphism) is a DNA fingerprinting technique, first described by Vos et al. (1995). It is based on selective PCR amplification of DNA restriction fragments under stringent conditions (Vos et al., 1995). Having the potential to generate a large number of polymorphic loci (Powell et al., 1996), comparative studies indicated that AFLP is a powerful tool to detect levels of genetic diversity and genetic structure of natural populations in many animals’ species. The advantages of this method are reproducibility, high level of polymorphism detection genome wide distribution of markers and no pre-requisite of knowledge of the genome being studied (Muller and Wolfenbarger, 1999). Few studies have aborted the evaluation of genetic diversity of animals mostly cattle using AFLP technique. For this reason, this study approach to describe the different steps of this technique.

To show interest to the genetic diversity of the indigenous cattle population in Tunisia, the objective of this study was to investigate genetic diversity and population genetic structure of 154 cattle genotypes of North regions of Tunisia belonging to 3 regions (Bizerte, Béja and Jendouba) using AFLP technique.

A total of 154 samples of native cattle were collected from eight locations as shown in figure 1 (Bizerte: Séjnène, Shiri; Béja: Nevza, Chottezoueraa, Loulija ; Jendouba: Ghareddimaou, Tabarka and Ain Drahem). Venous blood was taken from each individual’s from the jugular vein and mixed with anticoagulant (EDTA) and then kept at -20°C for subsequent DNA extraction.