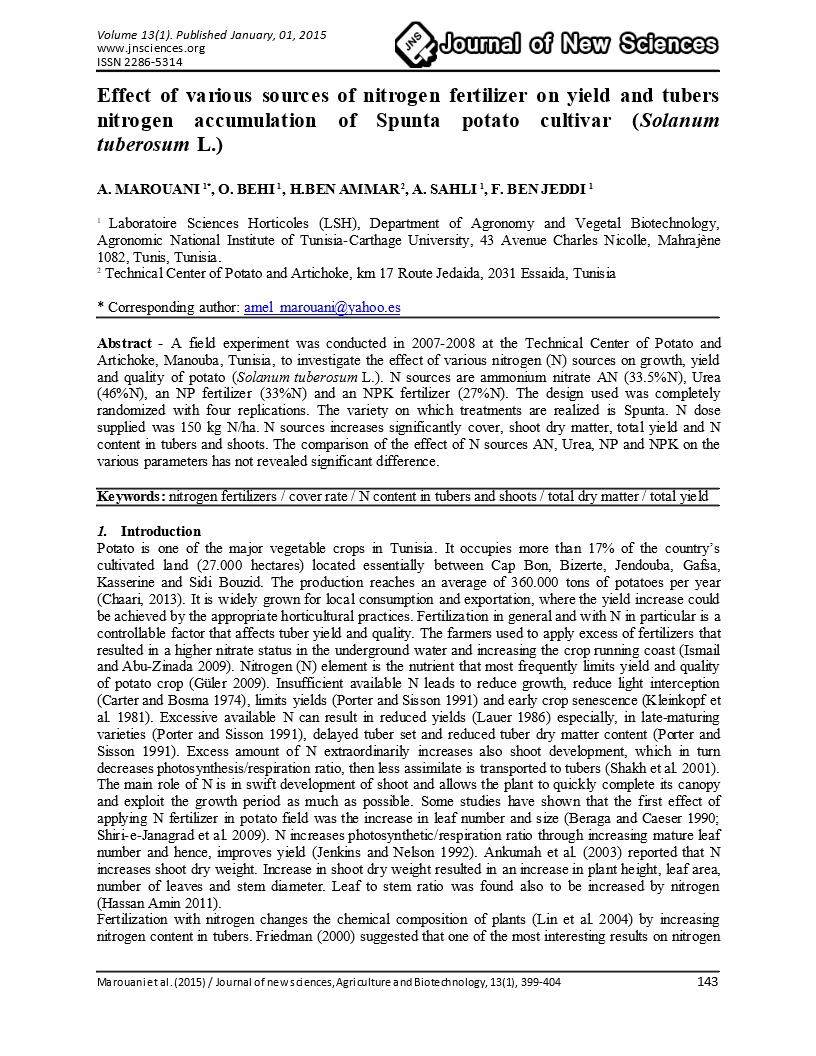 Abstract - A field experiment was conducted in 2007-2008 at the Technical Center of Potato and Artichoke, Manouba, Tunisia, to investigate the effect of various nitrogen (N) sources on growth, yield and quality of potato (Solanum tuberosum L.). N sources are ammonium nitrate AN (33.5%N), Urea (46%N), an NP fertilizer (33%N) and an NPK fertilizer (27%N). The design used was completely randomized with four replications. The variety on which treatments are realized is Spunta. N dose supplied was 150 kg N/ha. N sources increases significantly cover, shoot dry matter, total yield and N content in tubers and shoots. The comparison of the effect of N sources AN, Urea, NP and NPK on the various parameters has not revealed significant difference.

Potato is one of the major vegetable crops in Tunisia. It occupies more than 17% of the country’s cultivated land (27.000 hectares) located essentially between Cap Bon, Bizerte, Jendouba, Gafsa, Kasserine and Sidi Bouzid. The production reaches an average of 360.000 tons of potatoes per year (Chaari, 2013). It is widely grown for local consumption and exportation, where the yield increase could be achieved by the appropriate horticultural practices. Fertilization in general and with N in particular is a controllable factor that affects tuber yield and quality. The farmers used to apply excess of fertilizers that resulted in a higher nitrate status in the underground water and increasing the crop running coast (Ismail and Abu-Zinada 2009). Nitrogen (N) element is the nutrient that most frequently limits yield and quality of potato crop (Güler 2009). Insufficient available N leads to reduce growth, reduce light interception (Carter and Bosma 1974), limits yields (Porter and Sisson 1991) and early crop senescence (Kleinkopf et al. 1981). Excessive available N can result in reduced yields (Lauer 1986) especially, in late-maturing varieties (Porter and Sisson 1991), delayed tuber set and reduced tuber dry matter content (Porter and Sisson 1991). Excess amount of N extraordinarily increases also shoot development, which in turn decreases photosynthesis/respiration ratio, then less assimilate is transported to tubers (Shakh et al. 2001). The main role of N is in swift development of shoot and allows the plant to quickly complete its canopy and exploit the growth period as much as possible. Some studies have shown that the first effect of applying N fertilizer in potato field was the increase in leaf number and size (Beraga and Caeser 1990; Shiri-e-Janagrad et al. 2009). N increases photosynthetic/respiration ratio through increasing mature leaf number and hence, improves yield (Jenkins and Nelson 1992). Ankumah et al. (2003) reported that N increases shoot dry weight. Increase in shoot dry weight resulted in an increase in plant height, leaf area, number of leaves and stem diameter. Leaf to stem ratio was found also to be increased by nitrogen (Hassan Amin 2011).

Fertilization with nitrogen changes the chemical composition of plants (Lin et al. 2004) by increasing nitrogen content in tubers. Friedman (2000) suggested that one of the most interesting results on nitrogen fertilization of potatoes can be the change of amino acid content in potato tubers. After the use of N fertilizer the proportion of free amino acids, in comparison with the content of protein-bound amino acids, increases (Talaat 2003)

This study aimed to investigate the effect of different nitrogen sources on growth parameters and productivity of potato crop under Tunisian conditions.

The experiment was set up in a completely randomized design with five treatments: Urea (46%N), ammonium nitrate AN (33.5%N), an NP fertilizer (33%N - 14%P2O5), an NPK fertilizer (27%N - 5%P2O5 - 5%K2O) and a control (without N supply) and four replications. Fertilizers were applied according to the fertilization program established by CTPTA. Indeed, 60% of fertilizer applications were made in vegetative growth phase during four weeks, 20% in tuberization phase during two weeks and 20% in maturation of tubers phase during four weeks. Nitrogen dose used for each treatment was 150 kg N/ha. The potato variety used in this experiment was Spunta which is the most cultivated in Tunisia and occupies more than 80% of the total area occupied by potato crop (Azzouz 1996). Spunta was planted in rows 20m long that were spaced 0.8m. Spacing within rows was 0.3m giving 67 plants per row.

The identification of phenological development stages of potato was made from BBCH code which is a scale developed by the four agrochemical groups (Bayer, BASF, Ciba-Geigy, Hoechst) (Meier, 2001). At BBCH 35 (vegetative growth stage), BBCH 40 (tuberization stage) and BBCH 47 (maturation of tubers stage), three plants per replication and treatment were sampled in order to determine plant cover rate, plant shoot dry matter and nitrogen content in tubers. Shoot and tuber dry matter were measured by drying samples at 75°C to a constant weight. Yield and mean weight of tubers according to their diameter (g/plant) (C < 30mm, 30 <C<45mm and C > 45mm) were measured at harvesting time at BBCH 49. Nitrogen content in tubers was carried out using Kjeldahl method (Bremmer 1965).

Data were statistically analyzed according to Statistix 9 program (Analytical Software, 2014), where means comparison was carried out using LSD test. Means followed by the same letters are insignificantly different at p = 0.05.

Figure 2 shows the effects of N sources on potato cover rate. According to variance analysis (Fig. 2), N sources had not significant effects (p >0.05) on cover rate at the beginning of the crop cycle (BBCH 35). Plants subjected to various sources of N and plants control have statistically similar cover rates.

At tuberization stage (BBCH 40), the variance analysis indicates a significant effect (p < 0.05) of N sources on cover rate. The values showed that N sources significantly increased potato cover rate from 68% for control to 84% for Urea. Similarly, N sources significantly increased potato cover rate at maturation of tubers stage (BBCH 47) from 73% for control to 91, 90 and 91% for An, Urea and NPK, respectively. The increase in cover rate can be attributed to the fact that nitrogen promotes plant growth and plant height and this resulted in more nodes and internodes and subsequently more production of leaves. In this respect, Harrison and Hurd (2006), Yuan et al. (2007) and Jamaati-e-Somarin et al. (2009) found that nitrogen fertilization significantly increased the canopy development promoting organogenesis and growth of the aerial parts, especially leaves.

At BBCH 40 and BBCH 47, N sources didn’t affect potato shoot dry matter. The variance analysis showed that shoot dry matter of AN, Urea, NP and NPK are statistically similar to shoot dry matter of control (Table 1). The increase in shoot dry matter can be attributed to the fact that nitrogen promotes plant growth, increases leaf expansion rate, leaf size and total number of leaves that emerge on a plant (Vaezzadeh and Naderidarbaghshahi 2012). Similar results were reported by Baniuniene and Zekaite (2008) on Vok and Goda potatoes, Bélanger et al. (2001) on Shepody and Russet potatoes, and Ismail and Abu-Zinada (2009) on Spunta potato.

Figure 3 shows the effects of N sources on potato total yield. Statistical analysis indicates that applying N sources increased significantly (p < 0.05) potato total yield from 23.92t/ha for control to 34.48, 39.08, 38.17 and 36.34t/ha for AN, Urea, NP and NPK, respectively at harvesting time. The increase in fresh yield under nitrogen application can be attributed to the positive effect of nitrogen on stolons formation by influencing the biosynthesis and activity of phytohormons balance (Amzallag et al. 1992). These findings are in conformity with the findings of other investigators, Chambenoit et al. (2002), Goffart et al. (2002), Baniuniene and Zekaite (2008) and Güler (2009). Others studies carried out on maize (Zea mays L.) (Mwiti Mutegi et al., 2012) confirmed the positive effect of N sources on crop yield.

The source of N fertilizer did not have any significant (p > 0.05) effect on the yield of potato (Fig. 3). The application of ammonium nitrate, urea, NP or NPK led to yields statistically similar and equals to 47t ha-1. This result is consistent with the previous reports of Ankumah et al. (2003) in sweet potato who indicated that urea and ammonium nitrate had not a significant effect on the yield of Georgia Jet and Rojo Blanco. By against, it is inconsistent with the findings of Hammett and Miller (1982) and Hassan Amin (2011) who reported that sources of N have been shown to affect yield in sweet potato and maize, respectively. The similarity in fresh yield may be due to the similarity of nutrients included in nitrogen sources.

This study indicates that potato production in Tunisian conditions strongly impressed by nitrogen fertilization. The supply of 150kg N/ha has improved significantly cover rate, shoot dry matter, total yield and N content in tubers and shoots. The comparison of the effect of N sources AN, Urea, NP and NPK on the various parameters has not revealed significant difference. This confirms the possibility of substituting a nitrogen fertilizer by another in case of necessity. In order to improve the use efficiency of nitrogen fertilizer, it is recommended their use as a reasoning program that will determine the farmer's intervention time and prevent nitrogen overdoses.

We thank Mr Jabrane CHRIGUI, the technician of the pasture and forage Laboratory, for his assistance during the analysis of soil and plant.

Baniuniene A, Zekaite V (2008) The effect of mineral and organic fertilizers on potato tuber yield and quality. Agronomijas Vēstis (Latvian Journal of Agronomy), 11: 202-206.

Talaat M (2003) The effect of mineral and compost fertilization on the nitrogen content and amino acid composition of potato and oat grains. Thesis. University Wien, Wien.