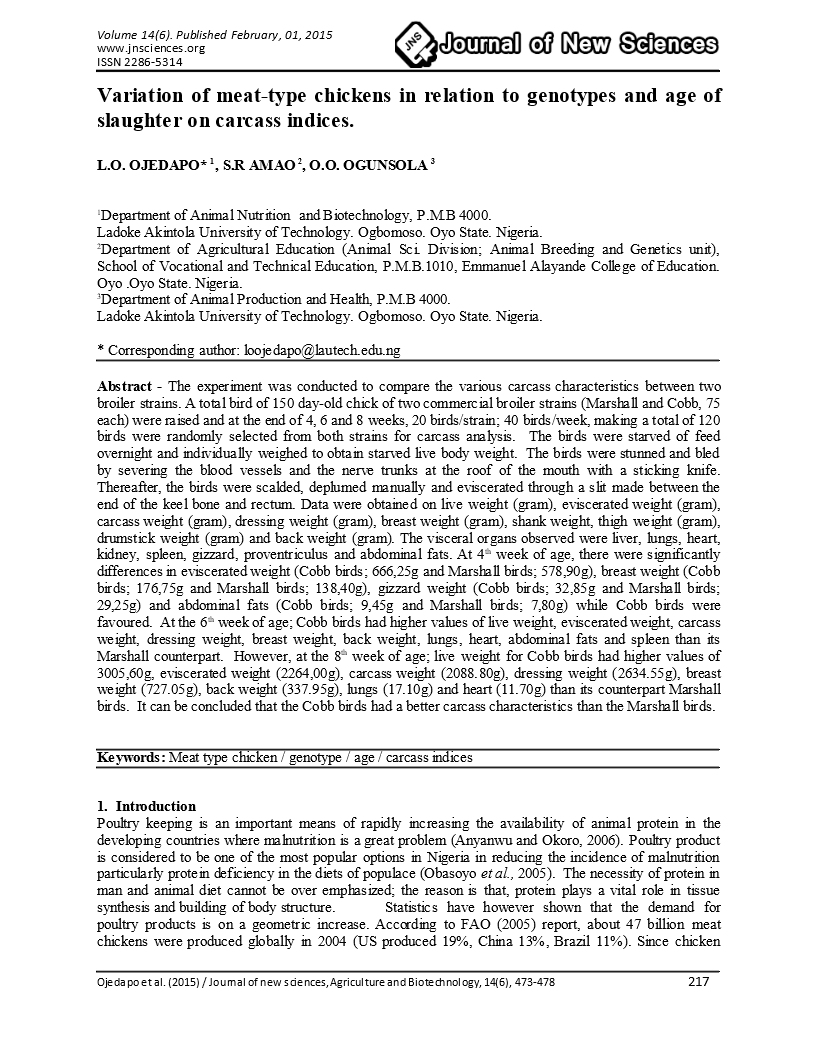 Poultry keeping is an important means of rapidly increasing the availability of animal protein in the developing countries where malnutrition is a great problem (Anyanwu and Okoro, 2006). Poultry product is considered to be one of the most popular options in Nigeria in reducing the incidence of malnutrition particularly protein deficiency in the diets of populace (Obasoyo et al., 2005). The necessity of protein in man and animal diet cannot be over emphasized; the reason is that, protein plays a vital role in tissue synthesis and building of body structure. Statistics have however shown that the demand for poultry products is on a geometric increase. According to FAO (2005) report, about 47 billion meat chickens were produced globally in 2004 (US produced 19%, China 13%, Brazil 11%). Since chicken meat costs less than other meats, its market share is on the increase. At this rate of increase, the European Union is expected to produce more to meet the demand for poultry meat both locally and internationally. On the Nigerian scene, demand for poultry products is equally high and the current rate of production is extremely low and inadequate to meet with the demand.

Broiler meat production is raised primarily for human consumption within shortest period of time profitability. Until recently most birds were sold whole, but there has been a dramatic increase in the production of birds being grown for portioning and further processing (Ewart, 1993). The greatest scientific and technological development of poultry industry in the last years demanded the evaluation of different commercial broiler strains, as well as different handling technique, in order to improve production efficiency and help in decision making.

The marketing of poultry has been greatly diversified with a significant increase in cut-up (parts) and processed products (Le Bihan Duval et al., 2001). Demand for high quality cut-up (parts) and further processed convenience foods have driven the poultry industry to change its marketing practices (Watts and Kennett, 1995). Breeders of meat-type chickens have become interested in adult body weight and other growth traits, aimed at big-bodied weight at early age in order to attract better price at marketing (Malik et al., 1997) since the age at which broiler chicken are sold is greatly influenced by consumer preferences (Omage et al., 2006).

The main goal of broiler rearing is production of quality broiler carcasses that will be acceptable from the consumers. Acceptability depends on the quality and quantity of edible parts of carcasses, and the amount of muscle mass in carcass. Broilers carcasses are evaluated mainly through yield edible parts of which are expressed by dressing percentage (slaughter yields) and the quality of edible parts of carcass. All quality characteristics of carcass are inherent in the hybrids (genotype) and are therefore conditionally hereditary characteristics with precisely defined heritability proposed values (Chen et al., 1987).

In Nigeria today, poultry keeping is one of the most popular enterprises adopted by both small and medium scale farmer in the rural and urban setting (Idowu et al., 2005). At present, there is an improvement in potential of broiler strains to provide high quality meat at lower cost (Kemp and Kenny, 2003). Reports from Mallo et al., (1997); Ojedapo et al., (2008) and Amao et al., (2009) stressed their findings on the different strains of commercial broilers in term of growth traits and breeding management but not in relation to the age at slaughtered. Therefore, the production of fast maturing birds such as broilers which have the ability to grow fast with respect to age at slaughter and genotypes had to be adopted in this environment.

The experiment was carried out at the Poultry unit of Teaching and Research Farm, Ladoke Akintola University of Technology, Ogbomoso, Oyo State, Nigeria. Ogbomoso lies on the longitude 4º15¹ East of the Greenwich Meridian and Latitude 8º15¹ North of the equator. It is about 145km Northeast of Ibadan, the capital of Oyo State. The mean temperature is about 27ºC while the annual mean rainfall is 1247mm (Ojedapo and Amao, 2014).

A total bird of 150 day-old chick of two commercial broiler strains (Marshall and Cobb, 75 each) was used. Marshall was purchased at Obasanjo’s Farm in Ibadan and Cobb was purchased at Zartech Farm in Ibadan with all necessary vaccination administered. Each strain was identified by given a separate pen in an environmentally controlled brooder house with a floor covered with wood shavings which was kept dry throughout the experimental period by replacing spoiled litter when required.

The experimental house was constructed with planks, well netted and covered with nylons to reduce cold and its effect during brooding stage. The experimental house was thoroughly cleaned with detergent and water, disinfected with morigad and then left to dry for seven days. The pen’s floor spacing of 1.5sq feet per bird was spread and covered with fresh saw dust to a thickness of 7 cm. All the equipment such as drinkers, feeders and wire separators were thoroughly cleaned and disinfected. The pens were later heated before the arrival of the birds with charcoal pot as source of heat with electric bulbs.

At the end of 4, 6 and 8 weeks, 20 birds/strain; 40 birds/week, making a total of 120 birds were randomly selected from both strains. The birds were starved of feed overnight and individually weighed to obtain starved live body weight. The birds were stunned and bled by severing the blood vessels and the nerve trunks at the roof of the mouth with a sticking knife. Thereafter the birds were scalded, deplumed manually and eviscerated through a slit made between the end of the keel bone and rectum. The live weight, eviscerated weight, carcass weight, dressing weight, breast weight, shank weight, thigh weight, drumstick weight and back weight were recorded. The visceral organs recorded were liver, lungs, heart, kidney, spleen, gizzard, proventriculus and abdominal fats. The parameters were measured as described by Kleczek et al., (2007).

The data collected were subjected to one-way analysis of variance using the general linear model of (SAS, 2003) and t- test were used to separate the means. The below model was adopted;

Yijk = The individual measurement on each bird

abMean along the same column with different superscripts are significantly (P<0.05) different.

abMean along the same column with different superscripts are significantly (P<0.05) different.

The indication from the visceral organs evaluation at earlier stage of the evaluation reveals only a significant different for gizzard weight and abdominal fats were disagreed with the works of Uwalaka et al., (2013). These authors noted a lower ranged of values for gizzard weight for their broiler birds.Meanwhile, at the 6th week of visceral organs assessment, the values obtained for heart, lung and spleen weight were not in line with the findings of Stahl et al., (2003) who reported lower values for these parameters and Makram et al., (2010) who documented higher values for these variables in their four genotypes of meat-chickens.However, at the last visceral organs evaluation exercise; the variables obtained that differs were lungs and heart weight values which were similar to the values noticed earlier by Ojedapo et al., (2008); Ojedapo et al., (2009). These authors reported values that were in the ranged with this present study for commercial broilers raised both in deep litter and cage systems.

These present results that give an insight to the effect of strain of broilers (Cobb and Marshall) on carcass characteristics shows that Cobb birds depicted well in term of cut-up parts and visceral organs than the Marshall strains. From the results obtained in this present study, it can be suggested to the livestock keepers or farmers around this area to raise Cobb birds due to their better displays of carcass characteristics.