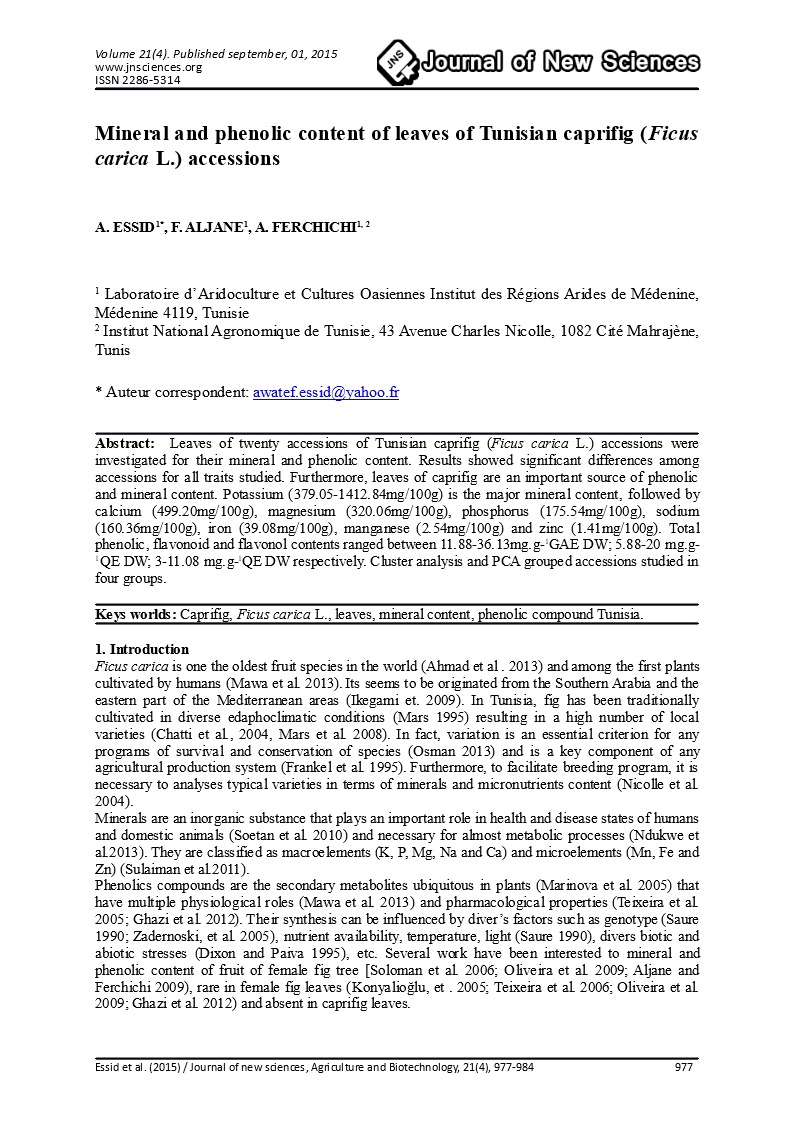 Ficus carica is one the oldest fruit species in the world (Ahmad et al . 2013) and among the first plants cultivated by humans (Mawa et al. 2013). Its seems to be originated from the Southern Arabia and the eastern part of the Mediterranean areas (Ikegami et. 2009). In Tunisia, fig has been traditionally cultivated in diverse edaphoclimatic conditions (Mars 1995) resulting in a high number of local varieties (Chatti et al., 2004, Mars et al. 2008). In fact, variation is an essential criterion for any programs of survival and conservation of species (Osman 2013) and is a key component of any agricultural production system (Frankel et al. 1995). Furthermore, to facilitate breeding program, it is necessary to analyses typical varieties in terms of minerals and micronutrients content (Nicolle et al. 2004).

Minerals are an inorganic substance that plays an important role in health and disease states of humans and domestic animals (Soetan et al. 2010) and necessary for almost metabolic processes (Ndukwe et al.2013). They are classified as macroelements (K, P, Mg, Na and Ca) and microelements (Mn, Fe and Zn) (Sulaiman et al.2011).

Therefore, this study is interested to evaluate mineral and phenolic content of leaves of twenty Tunisian caprifig accessions.

Leaves of twenty accessions of Tunisian caprifig (Table 1) were collected from the fig germplasm collection of Arid Land Institute of Médenine established in ‘El Gordhab’, Tataouine in the South-east of Tunisia.

For each sample about 1g of dried leaves was placed in porcelain capsule and heated at 550°C for 4h. After cooling, ashes were treated with 1ml of hydrochloric acid and 5ml of deoinised water, carried to boiling, filtered, adjusted to 100ml with deonised water and solutions were used for mineral analyses. Phosphorous contents were detected by a spectrophotometer (ANTHELIE ADVANCED, Microbeam, S.A.) while that of calcium, iron, potassium, magnesium, manganese, sodium and zinc were performed with flame atomic absorption method. For each accession the experiment was performed three times.

The extraction of total phenolic was performed according to protocol previously described (Amin and Tan 2002) with minor modifications. About 0.5g of lyophilized leaves were homogenised with 25ml of boiled ultrapure water, agitated using an orbital shaker at 200 rpm for 2h at 50°C then submitted to centrifugation at 3000 rpm for 15 min at room temperature. The supernatant was conserved at -4°C for further analysis. For each accession extraction was performed three times.

Total phenolic, flavonoid and flavonol content were determined according to the method previously described (Kumaran and Karunakaran 2006). Total phenolic content was determined using the Folin–Ciocalteu reagent. Approximately, 100ul of extract were mixed with 500ul of FCR, 1.5ml of 20% sodium carbonate was added. The mixture was shaken thoroughly and completed to 10 ml with ultrapure water. The absorbance at 765 nm was determined after 2h. Results were expressed as mg gallic acid equivalents (GAE)/100g.

Flavonoid content was determined by aluminium chloride method. About 100ul extract was mixed with 100ul of 20% aluminium trichloride in methanol and a drop of acetic acid, and then diluted with ultrapure water to 5 ml. After 40 min the absorption at 415 nm was read. Results were expressed as mg quercetin equivalents (QE)/100g.

In order to determine a content of flavonols, about 1 ml of each extract was mixed with 1 ml aluminum trichloride (20 mg/ ml) and 3 ml sodium acetate (50 mg/ ml). The absorbance at 440 nm was read after 2.5 h. Results were expressed as mg quercetin equivalents (QE)/100g.

The concentration of total phenolic, flavonoid and flavonol contents are shown in Table 3. Average of total phenolic was 20.82±5.94mg.g-1GAE DW. The highest value was recorded in TBS (31.38±0.83mg.g-1GAE DW) while the lowest was in DKH3 (11.88±2.44 mg.g-1GAE DW). Those values seem to be higher than those reported in leaves of female fig tree (Konyalioğlu et al. 2005). This higher value in phenolic compound can be attributed to genetic factor (Zadernoski, et al. 2005). But also, to conditions of water stress frequent in Southern Tunisia. In fact, insufficiency of the water in the plant tends to generate this situation of stress which induces the production of phenols (Par and Bolwell 2000).

Cluster analysis using the unweighted pair group method with arithmetic mean (UPGMA) based on mineral and phenolic compound revealed that the 20 accessions studied could be divided into 4 groups (Figure 1). Group (A) included DKH7 accession where is content the most important values in zinc, phosphorus, total phenolic, flavonoid and flavonol. Group (B) contain two accessions (BHG1 and BTH1) were characterized by the low values in magnesium and zinc. Group (C) formed the almost of accessions and group (D) contain two accessions (KHD and MAG1) who are distinguished by the most important values in manganese. Group (C) can be subdivided in two subgroup. First subgroup (C.1) contains ASF accession and the second (C.2) is formed by the remaining of accessions.

As in the UPGMA cluster analysis four groups have been found (Figure 1). Both UPGMA and PCA showed that geographic origin is not the main critical trait to classify accessions studied.

Caprifig leaves were analyzed for their content to mineral and phenolic content. Significant differences among accessions studied were observed indicating a great mineral and phenolic diversity. Potassium presents the highest amount in mineral content. Leaves of Tunisian caprifig accessions are good source of mineral and phenolic content. So, it is important to use this specie not only for genetic diversity but also for their therapeutic effect. Cluster analysis and PCA grouped accessions studied into four groups. Both PCA and UPGMA cluster analysis showed that geographic origin is not the main critical trait to discriminate between accessions of caprifig tree studied. DKH7 originated from Zammour (Médenine) diverged from other accessions by their most important values in zinc, phosphorus, total phenolic, flavonoid and flavonol.

We gratefully acknowledge the farmers in ‘CFPA’ ‘El Gordhab’, Tatouine and the Institute of Arid Region, Médenine Tunisia for their cooperation and B. Lachiheb for mineral content help.

Lewko J, Ścibisz K, Sadowski A (2004) Mineral element content in the leaves of rootstocks used for pears and of maiden trees budded on them. Acta Sci. Pol., Hortorum Cultus 3:147-152

Par J.A, Bolwell G.P (2000) Phenols in the Plant and in man. The potential for possible nutritional enhancement of the diet by modifying the phenols content or profile. Journal of Agricultural and Food Chemistry 50:722-727