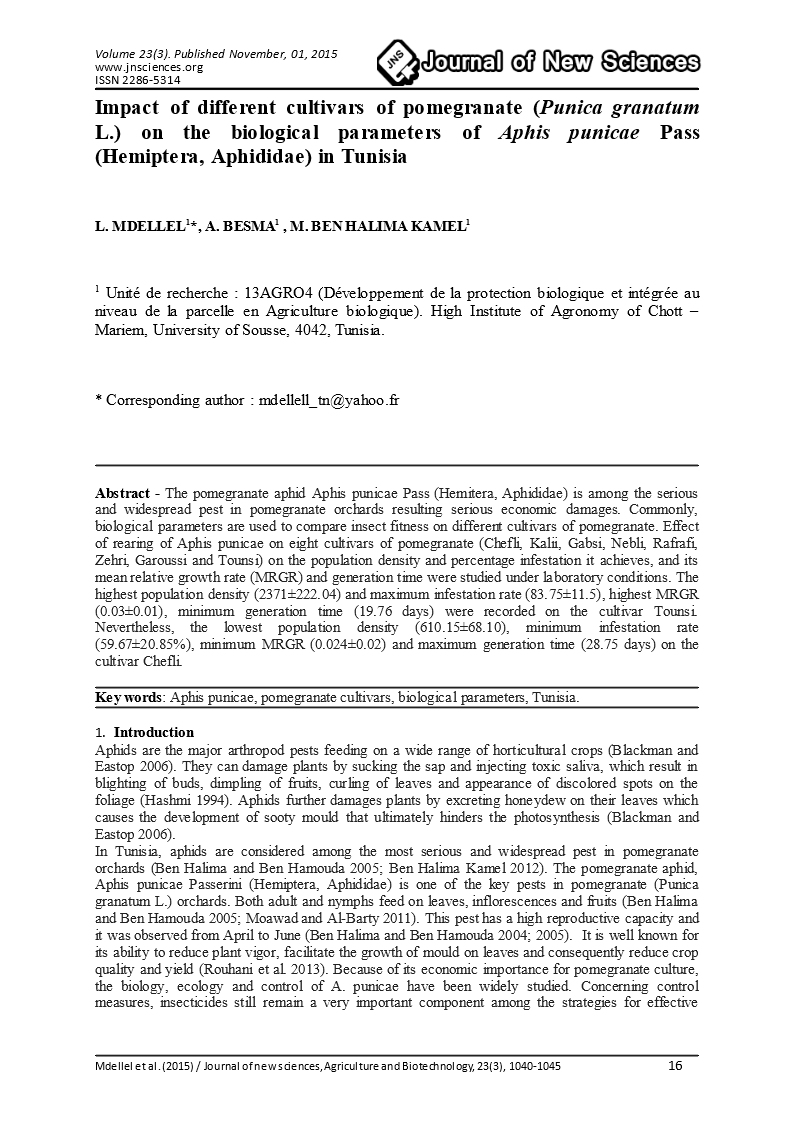 Aphids are the major arthropod pests feeding on a wide range of horticultural crops (Blackman and Eastop 2006). They can damage plants by sucking the sap and injecting toxic saliva, which result in blighting of buds, dimpling of fruits, curling of leaves and appearance of discolored spots on the foliage (Hashmi 1994). Aphids further damages plants by excreting honeydew on their leaves which causes the development of sooty mould that ultimately hinders the photosynthesis (Blackman and Eastop 2006).

In Tunisia, aphids are considered among the most serious and widespread pest in pomegranate orchards (Ben Halima and Ben Hamouda 2005; Ben Halima Kamel 2012). The pomegranate aphid, Aphis punicae Passerini (Hemiptera, Aphididae) is one of the key pests in pomegranate (Punica granatum L.) orchards. Both adult and nymphs feed on leaves, inflorescences and fruits (Ben Halima and Ben Hamouda 2005; Moawad and Al-Barty 2011). This pest has a high reproductive capacity and it was observed from April to June (Ben Halima and Ben Hamouda 2004; 2005). It is well known for its ability to reduce plant vigor, facilitate the growth of mould on leaves and consequently reduce crop quality and yield (Rouhani et al. 2013). Because of its economic importance for pomegranate culture, the biology, ecology and control of A. punicae have been widely studied. Concerning control measures, insecticides still remain a very important component among the strategies for effective control of pomegranate aphid in Tunisia for many years. Nevertheless, extensive usage of insecticides to control this pest results in the development of resistance (Zheng et al. 2009; Pavela et al. 2009) and the systemic insecticides can be absorbed by the tree’s root system and circulated throughout the rest of the plant (Rouhani et al. 2013). That forced many researchers to find new and effective methods for safe control of this pest, such as the use of plant extracts (Endersby and Morgan 1991; Moawad and Al Barty 2011). Also, cultural practices can be used to create conditions unfavorable to pest development, and constitute a major component of fruit pest management. Cultural practices involved in plant cultivars are also an important field of interest. Indeed, aphids are very selective feeders, which choose their host plant based on visual, mechanical and chemical stimuli (Bernays 1994). The acceptance or rejection of a plant by aphids can involve the nature of the plant’s volatile chemicals, surface waxes, intercellular polysaccharides, mesophyll and phloem constituents (Niemeyer 1990; Caillaud and Via 2000). Therefore, the size of aphid populations varies from host to other and depending to plant vigor. Price (1991) predicts that herbivorous insects will perform better on vigorously growing plants. Several studies have confirmed (Inbar et al. 2001) or contradicted (Johnson et al. 2003) this hypothesis. In order to control this pest, several methods were used like the winter pruning. It’s is a training practice used in all fruits orchards to shape fruit trees or to adjust crop load. It is generally seen as a means of controlling tree vegetative growth and vigor (Marini 1984), and therefore, may also influence aphid performance. However, this method is not a very effective control measures. The development of a comprehensive pest management program for pomegranate in Tunisia is dependent on having good estimates of the demographic parameters of A. punicae on different cultivars of pomegranate. Indeed, there are several studies of the effect of host plants on the development rates and fecundities of various pest insects (Morgan et al. 2001). For this, we need to know the behavior of this aphid on different cultivated cultivars of pomegranate in Tunisia and the susceptibility or resistance of these cultivars to this aphid. This is a fundamental component of an integrated pest management program for any crop.

The aim of this study is to improve the impact of eight cultivars of pomegranate on the biological parameters of A. punicae reared under controlled conditions.

Aphis were collected from parthenoogenetic population on pomegranate in a field at Chott Mariem in Tunisia (36° 48’ N, 10°11’E) and reared for several generations on pomegranate in a green house at 21±2°C, HR: 60-80% and under a long day photoperiod ( L:D 14:10) (Troncoso et al. 2005). These aphids were needed to infest the pomegranate trees used in the experiments.

Eight cultivars of pomegranate (Chefli, Kalii, Gabsi, Nebli, Rafrafi, Zehri, Garoussi and Tounsi) were used as host plants, which were established from pomegrante fragment of 20 cm from each cultivar in a 30 cm diameter plastic pots filled with suitable soil. At the 12th leaf stage, plants were infested with A. punicae.

At the 12th leaf stage, five apterous A. punicae were placed on each of the plants. The plants were then placed in cages to prevent contamination by other aphids. For each treatment (cultivars) there were 20 replicates (plants). The plants were checked each five day in order to determine the mean numbers of wingless and winged adult, overall fecundity (total number of larvae produced after 20 days), the infestation rates (number of infested leaves/total number of leaves), the mean relative growth rate (MRGR) which was calculated according to Fisher (1920) and Radford (1967), in Leather and Dixon (1984) using the formula:

Also, we determine the specific age (T) according to Ramade (2003) using the equation T=log2/ MRGR and the infestation rate .

For the laboratory assays, the experimental results were statistically analyzed using SPSS 17 program, a one way analysis of variance and a S-N-K test, with statistical significance set at ß=0.05. The population density, number of winged and wingless individuals and infestation rate on the different pomegranate cultivars were compared.

3.1. Impact on the abundance of Aphis punicae

Results of the impact of eight pomegranate cultivars on the abundance of A. punicae are presented in figure (1 and 2). The largest aphid population was recorded in decreasing order on the cultivars Tounsi, Garoussi, Zehri, Rafrafi, Guebsi, Nebli, Kalii and Chelfi (Figure 1). There was a significant difference between the levels of population after 20 days (F=431.33, df=7, ß=0.001) of the cultivars. A significant difference was also recorded in number of wingless individuals on the different pomegranate cultivars (Figure2) (F=687.35, df=7, ß=0.0013). The highest numbers of wingless individuals of A. punicae were recorded on Tounsi, Garoussi, Zehri and the lowest numbers on Nebli, Kalii, Guebsi, cheffi and Rafrafi. In terms of the numbers of the winged individuals, there a significant difference in the numbers recorded on the different cultivars (Figure 2) (F=110.23, df=7, ß=0.002).

3.2.Impact on the mean relative growth rate, generation time of A. punicae and infestation rate

The results indicate that the development and the reproduction of Aphis puniace differed significantly on the eight cultivars of pomegranate studied. A. punicae developed faster on Tounsi than on the other cultivars. Indeed, significant differences were recorded in population density, winged and wingless individuals mean relative growth rate, generation time and infestation rate of the different cultivars of pomegranate by A. punicae. Our results demonstrate that the cultivar Tounsi was more susceptible host than Garoussi, Zehri, Rafrafi, Guebsi, Nebli, Kalii and Chelfi. This indicates that the cultivar Tounsi is the best of these plants as host of A. punicae in terms of the demographic parameters measured. These results indicate that cultivars of pomegranate can affect the reproductive performance of A. punicae. In this context, Saikia and Muniyappa (1989) indicate that host plant variety can affect the reproductive performance of several species of aphids. Also, Nikolalkakis et al. (2003) reports a significant effect of the variety of the host plant on intrinsic rate of increase, fertility and generation time of M. persicae feeding on pepper and tobacco, with the intrinsic rate of increase 0.24–0.29 and 0.23–0.29, and fecundity 32.2 and 37.7 on pepper and tobacco, respectively. Fecundity also ranged from 28.9 to 45.5 on the different varieties of tobacco. Similarly, Goundoudaki et al. (2003) studies in Greece also revealed an effect of host plant variety on the performance of M. persicae and that its performance on 11 varieties of oriental tobacco and 5 of Virginia tobacco at 20 °C and under a 16 hours photophase differed significantly. In addition, Goundoudaki et al. (2003) report that the longevity of the green peach aphid ranges from 9.1 and 9.6 days, the intrinsic rate increase is 0.23 and percentage mortality between 27.9 and 52.5% on different varieties of Virginia tobacco, whereas, on oriental varieties longevity is between 7.3 and 9 days, intrinsic rate of increase ranges from 0.28 to 0.33 and percentage mortality between 10 and 47.9%. The impact of host plant varieties on the performance of aphids was demonstrated also in Sauge et al. (1998) works in France. Inded, authors’ report that the intrinsic rate of increase of M. persicae on four varieties of peach (GF305; Summer grand, Molo konare and Wild) are respectively 0.2; 0.28; 0.26 and 0.36.The effect of different host plant varieties on the performance of other species of aphids is also well documented. Buriro et al. (1997) report significant difference in terms of adult longevity, generation time and fertility of Schizaphis graminum Rondani, with of the four wheat cultivars tested Zagros the most resistant and Tajan the most susceptible. Similarly, the effect of host plant variety on biological parameters of aphids is reported by Razmjou et al. (2006) for five cultivars of cotton in which the highest offspring production per female of 29.6 was recorded on cultivar Sahel and lowest on Sea land. Goldasteh et al. (2012), in a similar study of S. graminum on four commercial cultivars of wheat grown under laboratory conditions, report that the development times of viviparous wingless aphids, total number of offspring produced per female and adult longevity differed significantly on the four wheat cultivars.

In conclusion, resistant plants play a key role in Integrated Pest Management programs. Identification of resistant cultivars of host plant is therefore the first step in the development of an IPM program. The results obtained in this study revealed that of the eight cultivars of pomegranate studied, Chelfi is the most resistant and Tounsi the most susceptible. For the mass rearing of the natural enemies of A. punicae, in insectaries or under laboratory conditions, for release in augmentative biological control programs, Tounsi would be the best choice for mass producing aphid prey based on our results. However, more studies are needed on the chemical composition of the sap and the performance of A. puniace on different cultivars of pomegranate in the field, and the effect of the pomegranate on effectiveness of the natural enemies of A. punicae.

We are grateful to Professor Masoud Mars and Mr. Bourourou Tawfik for valuable help and comments on earlier versions of this manuscript.