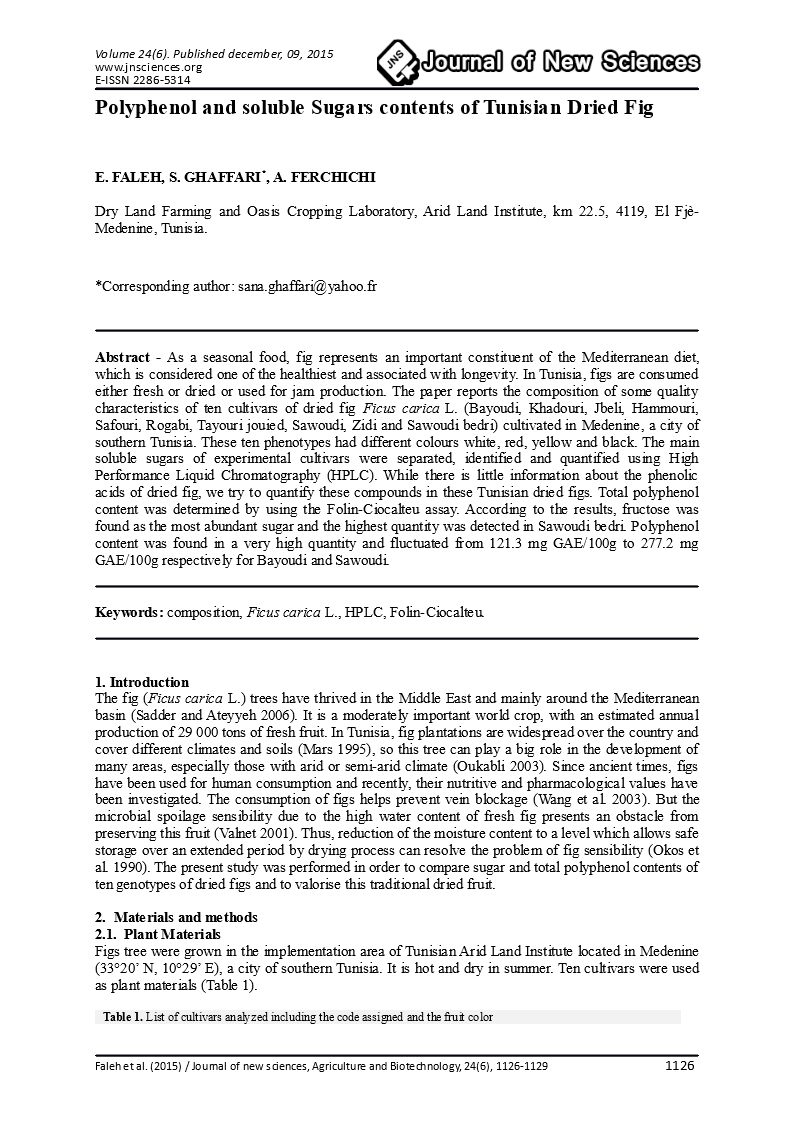 Abstract - As a seasonal food, fig represents an important constituent of the Mediterranean diet, which is considered one of the healthiest and associated with longevity. In Tunisia, figs are consumed either fresh or dried or used for jam production. The paper reports the composition of some quality characteristics of ten cultivars of dried fig Ficus carica L. (Bayoudi, Khadouri, Jbeli, Hammouri, Safouri, Rogabi, Tayouri jouied, Sawoudi, Zidi and Sawoudi bedri) cultivated in Medenine, a city of southern Tunisia. These ten phenotypes had different colours white, red, yellow and black. The main soluble sugars of experimental cultivars were separated, identified and quantified using High Performance Liquid Chromatography (HPLC). While there is little information about the phenolic acids of dried fig, we try to quantify these compounds in these Tunisian dried figs. Total polyphenol content was determined by using the Folin-Ciocalteu assay. According to the results, fructose was found as the most abundant sugar and the highest quantity was detected in Sawoudi bedri. Polyphenol content was found in a very high quantity and fluctuated from 121.3 mg GAE/100g to 277.2 mg GAE/100g respectively for Bayoudi and Sawoudi.

The fig (Ficus carica L.) trees have thrived in the Middle East and mainly around the Mediterranean basin (Sadder and Ateyyeh 2006). It is a moderately important world crop, with an estimated annual production of 29 000 tons of fresh fruit. In Tunisia, fig plantations are widespread over the country and cover different climates and soils (Mars 1995), so this tree can play a big role in the development of many areas, especially those with arid or semi-arid climate (Oukabli 2003). Since ancient times, figs have been used for human consumption and recently, their nutritive and pharmacological values have been investigated. The consumption of figs helps prevent vein blockage (Wang et al. 2003). But the microbial spoilage sensibility due to the high water content of fresh fig presents an obstacle from preserving this fruit (Valnet 2001). Thus, reduction of the moisture content to a level which allows safe storage over an extended period by drying process can resolve the problem of fig sensibility (Okos et al. 1990). The present study was performed in order to compare sugar and total polyphenol contents of ten genotypes of dried figs and to valorise this traditional dried fruit.

Figs tree were grown in the implementation area of Tunisian Arid Land Institute located in Medenine (33°20’ N, 10°29’ E), a city of southern Tunisia. It is hot and dry in summer. Ten cultivars were used as plant materials (Table 1).

The fruits of experimental cultivars were harvested at ripe stage then immediately exposed in the sun and distributed uniformly in the sample tray. After drying samples were conducted to the laboratory for chemical analysis.

For sugars; approximately 200 g of each sample was used and each replicate was prepared separately. From this homogenized material 10 g of sample was weighted and heated with aqueous ethanol (80%, v/v), and evaporated to dryness on the boiling water bath. Then, the obtained solutions were evaporated using a rotary evaporator vacuum in order to extract solvent. The residue was dissolved and ﬁltered before HPLC analysis. The used method was described by Miguez Bemardez et al. (2004) with some modifications. Contents of total phenolics were determined by Folin-Ciocalteu’s reagent at 750 nm, expressing the results in mg of gallic acid/100g. The used method was described by Häkkinen et al. (1998, 1999a, 1999b).

The results of this investigation are means of three measurements. To compare several groups, analysis of variance (ANOVA) was performed using SPSS v12.0. P-values of less than 0.05 were considered statistically significant.

Fructose and glucose were identified as the principal monosaccharides in the dried fig (Figure 1). Identifications were confirmed with known standards. The extracts of the dried fruit collected possessed different levels of fructose and glucose. The sugar contents are about 35.064 g/100g, which makes dried fig a very energetic product. Khadouri and Beyoudi have the less levels of fructose, while Sawoudi-Bedri has the most important contents of fructose and glucose. The differences observed in glucose and fructose levels could be associated with the activity level of the enzymes involved in the sugar metabolism, such as invertase and sucrose phosphate synthase. The absence of sucrose can be explained by hydrolysis into monosaccharides with the enzyme invertase (Frey-Wyssling et al. 1954; Zimmermann 1954).

The total polyphenol content of fresh fig was measured by Balestra et al. (2009) following acid hydrolysis to release free phenols followed by a reaction with the Folin-Cocialteu's reagent. The results of these analyzes showed that the polyphenol content in fresh fig fruit extracts was 72.8 ± 1.1 GAE mg/100g. Although dried fig specially Bayoudi cultivar presents the double quantity (121.3 GAE mg/100g), the other dried cultivars are more concentrated (Figure 2). These results show that the dried fig is more concentrated in polyphenol contents than the fresh one. The variability of the polyphenol content between the studied cultivars can be due to a difference in varietal origin owing to the fact that all the fig trees have the same age and are under the same ecological conditions. Drying conditions are also the same ones. Weather conditions could have an influence on the phenolic compound concentrations in dried fig.

In a recent study, Faleh et al. (2012) determined of the phenolic profile of dried figs of seventeen cultivars by HPLC-DAD mentioned different concentrations of total phenolic compounds comparing to those determined by Folin-Ciocalteu's reagent (Table 2).

Quantitatively RGB the red cultivar show a tendency for having the highest amounts of phenolic compounds 78.1 mg/kg determined by HPLC-DAD. However, SWD the black cultivar show a tendency for having the highest amounts of phenolic compounds 277.2 mg/100g determined by Folin-Ciocalteu's reagent. The two methods show different results. These facts seem to suggest that total polyphenol content determined by the Folin’s method showed significantly higher quantity compared to the value by HPLC analysis (Table 2). The Folin’s method is defined as the Folin-Ciocalteu measures reducing capacity, which has normally been used to estimate phenolic contents of biological materials. Since the Folin’s method detects not only polyphenolic compounds but also other biological compounds that have reducing power particularly sugars, aromatic amines, sulfur dioxide, ascorbic acid and other enediols and reductones, organic acids, and Fe(II). Rather, the reagent will react with phenols and non- phenolic reducing substances. Some inorganic substances may also react with F-C reagent (Box 1983; Peterson 1979). Tunisian fig cultivars seem to be more concentrated in total phenolic compounds than Spanich fig cultivars (17.8 mg/100g). Few works were interested in polyphenols of fruits. Among the most consumed food in south Tunisia, the dried fig contains one of the highest concentrations of it. According to several studies the fig phenolics have important effects on the health-promoting potential (Fernando et al. 2012). The catch day labourer of vegetable origin polyphenols is about 218 mg/day (Vinson et al. 1998) and Kühnau (1976) estimated that the daily requirements of polyphenols are approximately 1 g/day so dried fig can provide an important quantity of polyphenol which can cover an important part of the polyphenol requirements.

The study of the chemical composition of the dried fig cultivars made it possible to appreciate variabilities between the different cultivars. The cultivars Safouri and Hamouri proved to be the richest in natural sugars (glucose and fructose), therefore they represent a source of immediate energy. The dried figs are relatively rich in total polyphenols and the contents vary from 121.3 mg GAE/100g for Bayoudi to 277.2 mg GAE/100g for Sawoudi.

Box JD (1983) Investigation of the Folin-Ciocalteu phenol reagent for the determination of polyphenolic substances in natural waters. Water Res 17:511-525