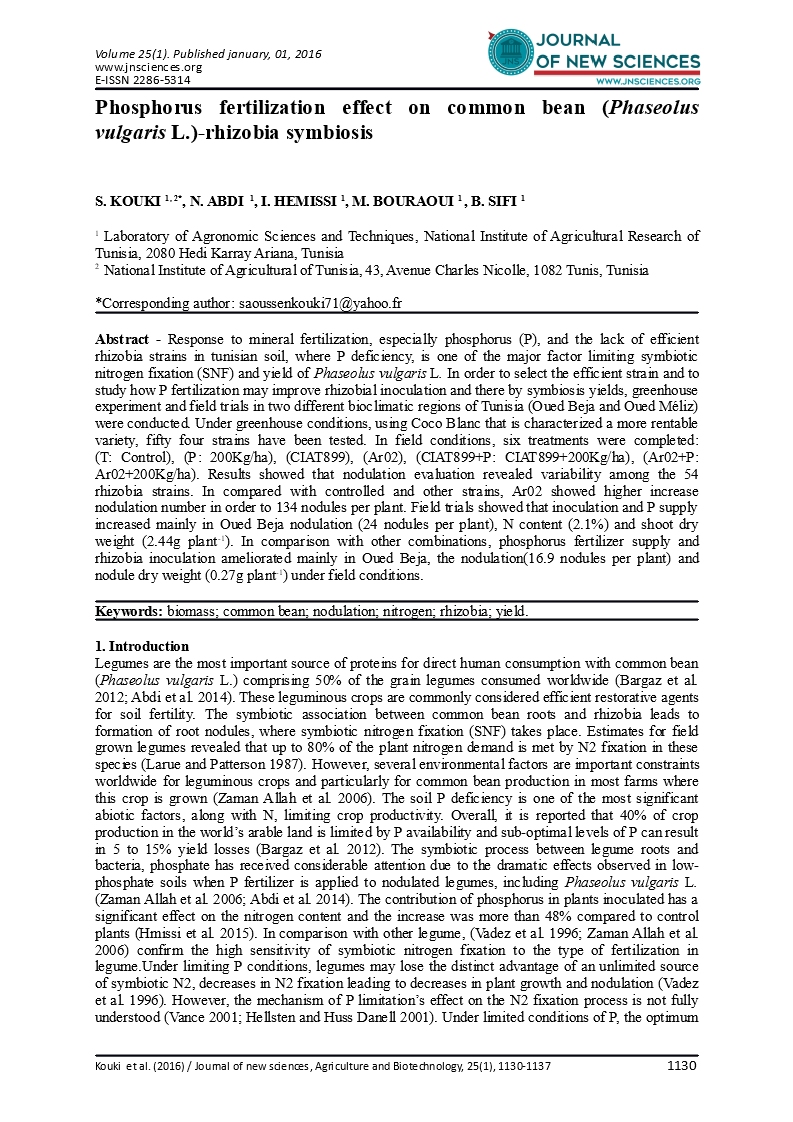 Legumes are the most important source of proteins for direct human consumption with common bean (Phaseolus vulgaris L.) comprising 50% of the grain legumes consumed worldwide (Bargaz et al. 2012; Abdi et al. 2014). These leguminous crops are commonly considered efficient restorative agents for soil fertility. The symbiotic association between common bean roots and rhizobia leads to formation of root nodules, where symbiotic nitrogen fixation (SNF) takes place. Estimates for field grown legumes revealed that up to 80% of the plant nitrogen demand is met by N2 fixation in these species (Larue and Patterson 1987). However, several environmental factors are important constraints worldwide for leguminous crops and particularly for common bean production in most farms where this crop is grown (Zaman Allah et al. 2006). The soil P deficiency is one of the most significant abiotic factors, along with N, limiting crop productivity. Overall, it is reported that 40% of crop production in the world’s arable land is limited by P availability and sub-optimal levels of P can result in 5 to 15% yield losses (Bargaz et al. 2012). The symbiotic process between legume roots and bacteria, phosphate has received considerable attention due to the dramatic effects observed in low-phosphate soils when P fertilizer is applied to nodulated legumes, including Phaseolus vulgaris L. (Zaman Allah et al. 2006; Abdi et al. 2014). The contribution of phosphorus in plants inoculated has a significant effect on the nitrogen content and the increase was more than 48% compared to control plants (Hmissi et al. 2015). In comparison with other legume, (Vadez et al. 1996; Zaman Allah et al. 2006) confirm the high sensitivity of symbiotic nitrogen fixation to the type of fertilization in legume.Under limiting P conditions, legumes may lose the distinct advantage of an unlimited source of symbiotic N2, decreases in N2 fixation leading to decreases in plant growth and nodulation (Vadez et al. 1996). However, the mechanism of P limitation’s effect on the N2 fixation process is not fully understood (Vance 2001; Hellsten and Huss Danell 2001). Under limited conditions of P, the optimum symbiotic interaction between the host plant and rhizobia would depend on efficient allocation and use of available P (Vance 2001). P level optimal was in order to 4.3 mg P kg−1 (Bargaz et al. 2012). Improving P nutrition to legumes under P-deficient conditions has generally involved two major mechanisms: (i) increasing P acquisition (root morphology, root exudation and P uptake mechanisms); and (ii) enhancing P utilization by internal mechanisms associated with conservable use of absorbed P at the cellular level (Raghothama 1999; Vance 2001; Bargaz et al. 2012). Application of bacterial inoculants and P fertilizer to field increased biomass production and grain yield of common bean compared with the single use of P or rhizobial strains (Abdi et al. 2014). Thus, the aim of this work was, to select the efficient rhizobia- common bean symbiosis. In addition, we studied the effect of P fertilization on rhizobia strain efficiency and it impact on symbiotic nitrogen fixation, nodulation, plant and grain yield under field conditions.

The seeds of Coco Blanc variety of common bean were sterilized with calcium hypochlorite (6.7%) for 15 min and then washed carefully in 4 changes of sterile distilled water. Thereafter, seeds were germinated for three days in Petri dishes containing sterile moistened blotting paper. Local and introduced rhizobia and common bean seeds were provided by the Laboratory of Sciences & Techniques Agronomics; National Institute of Agronomic Research in Tunisia (INRAT, Tunisia) (Table 1). Rhizobial inoculants, prepared as a liquid culture in YEM medium (Vincent 1970), were applied by soaking seedlings for 30 minutes in the inoculants prior to transplanting in plastic growth pots (0.5kg of sterile perlite). The ability of 54 infective strains was conducted through the measurement of parameters of the nodulation bearing on the number and nodule biomass. The test consists of 55 treatments. Each treatment was repeated 4 times. Irrigation was performed at 40 ml per pot 2 times a week with a nutrient solution devoid of nitrogen (Vincent 1970). Treatments are shown in Table1.

Under greenhouse conditions, four plants for each treatment were harvested at the early flowering stage. Nodules were then removed from the roots and the plants were separated into shoots and roots and dried in an oven at 70°C for 72 h. After dry weight measurements, shoots of each sample were ground individually and the N content was measured using the Kjeldahl procedure. For the field trials, complete systems with nodules of four plants were collected. Then, after rinsing them carefully, the roots and shoots of each plant were placed in paper bags. For each treatment, a total of 16 plants (four samples per block and four blocks in total) were harvested at flowering stage. Symbiotic parameters (nodule number and nodule dry weight (NDW)), shoots dry weights (SDW), nitrogen content per plant (%N/Pl) at flowering stage and yield at maturity stage were measured on each plant individually.

The experimental design was a randomized complete block. Statistical analysis was performed by the SPSS 11.5 software. The data were analysed using ANOVA and subsequent comparison of means was performed using the Fisher’s LSD test at p < 0.05.

A large variability in nodule number and dry weight was detected among the fifty four rhizobia strains (Table 2). Results showed that inoculation with Ar02 strain revealed a high nodulation (134 nodules plant-1) compared with other rhizobia. These results are in agreement with those reported by Abdi et al. (2014). Authors mentioned that Ar02 strain induced the formation of the most nodular number with Coco Blanc variety.

The results of biomass production assays are shown in Table 3.

3.2. Effect of inoculation and P fertilization on the rhizobia-common bean symbiosis under field conditions

The results showed that inoculation with CIAT899 and Ar02 strains improved nodulation which reached 8 and 5 nodules /Pl. in Oued Beja and 1 nodules /Pl. in Oued Meliz. The contribution of phosphorus in plants inoculated with CIAT899 and Ar02 improved nodulation of common bean plants (Table 5). Phosphorus increased the number of nodules from 8 to 40 nodules / Pl in Oued Beja and from 1 to 10 nodules / Pl in Oued Meliz (Table 5). The same phenomenon has led to the improvement on shoot and root dry weight. These results suggest that the strain CIAT899 is suitable for common bean cultivation in the region of Oued Beja and Oued Meliz. According to (Bargaz et al. 2012; Abdi et al. 2014), phosphorus fertilization increases the nodular number and plant production. Increasing the number and biomass of nodules under phosphorus fertilization has been reported by Abdi et al. (2014). Effect of phosphorus on nodulation remains partly bound to the high demands for the development of ATP and the nodular operation (Ribet et al. 1995; Hmissi et al. 2015). The variation of nodulation parameters could be due to the efficiency in acquisition of P from the rhizosphere (Bargaz et al. 2012).

The efficiency of the strain in biomass production is attributed to its power of atmospheric nitrogen. The addition of phosphorus did not improve the biomass production of common bean. These results confirm that inoculation with strains CIAT899 and Ar02 and application of phosphorus had no significant effect on shoot dry weight of common beans in the two sites (Tab.6). Phosphorus intake and inoculation with Ar02 strain improved shoot dry weight. It was in order to 3.56 g / Pl in Oued Beja and 8.06 g /Pl in Oued Meliz. While root dry weight was respectively, 0.3 g /Pl and 0.5 g / Pl in Oued Beja and in Oued Meliz. Phosphorus did not increase the root dry biomass production. The effect of inoculation and the phosphorus apply on root production is comparable to those obtained with control plants in both regions. The effect of other treatments of inoculation and application of phosphorus on root dry matter production is comparable to those obtained with the control plants in both regions. This result is the opposite of that found by (Bargaz et al. 2012; Abdi et al. 2014).

The seeds were harvested at crop maturity in Oued Beja and Oued Meliz stations from the two central rows of each block in order to assess the grain yield. One hundred seeds from each set were also weighted in order to estimate seed weight. In Oued Meliz, inoculation with Ar02 and additional P fertilizer led to an increase in grain yield and produced high weight seeds but it is lower in Oued Beja (Table 8). In Oued Meliz, inoculation with Ar02 and P fertilization increased yield and weight of seeds respectively from 11.67 to 15.33q/ha and from 20.96g/100 seeds to 23.33g/100 seeds (Table 8). In addition, the yield grain and weight of 100 seeds during season 2012/2013 were improved following inoculation with Ar02 and CIAT899 strains and the contribution of phosphorus fertilizers supply. Several studies have reported a positive effect of inoculation leading to an improvement in seed yield (Abdi et al. 2014). Although, a small contribution to crop production compared to fertilization, the amount of symbiotic nitrogen fixation remains very useful in maintaining and restoring soil fertility.

The present work aims to evaluate the importance of rhizobia inoculation and the effect of P fertilization on common bean production. Variability in results was showed in response of common bean crop to inoculation and mineral fertilizers. Combination of rhizobial inoculants and P fertilizer revealed an effect on nodulation, growth biomass production, nitrogen content and grain yield. Assessment of strain’s infectivity potential showed large variability between the tested rhizobia strain and Ar02 showing a high nodulation number compared with other rhizobia strain, these results are in agreement with those reported by the results of (Abdi et al. 2014).

Phaseolus vulgaris-rhizobia symbiosis exhibited different levels of adaptability under soil conditions and site. Combination of rhizobial inoculants and P fertilizer revealed a strong effect on nodulation, plant biomass, nitrogen content and grain yield. This study provides additional evidence that yields could be improved in common bean by inoculation with appropriate rhizobia and adequate phosphorus applications, although significant variation within and among sites and rhizobia were observed. The observation of an increase in nodule number and in N accumulation for each inoculation by Ar02 strain is to our knowledge the first description of a correlation between nodulation, N2 fixation and rhizobia inoculation.