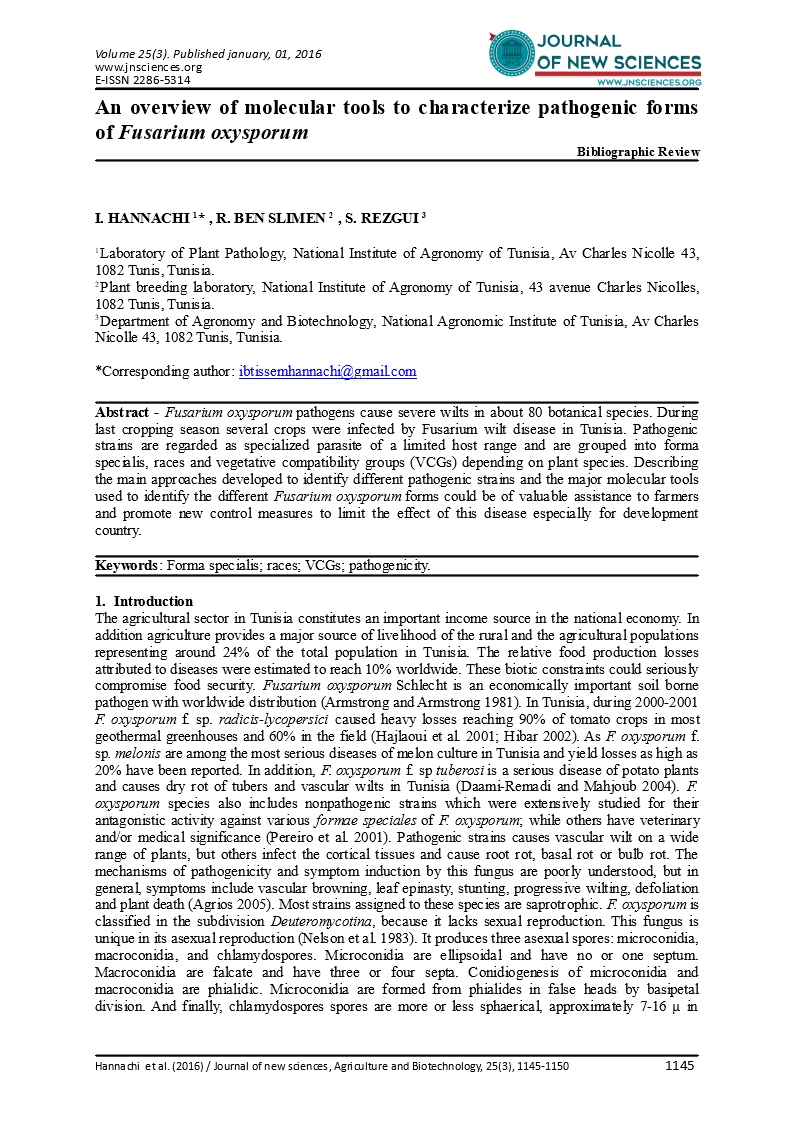 Abstract - Fusarium oxysporum pathogens cause severe wilts in about 80 botanical species. During last cropping season several crops were infected by Fusarium wilt disease in Tunisia. Pathogenic strains are regarded as specialized parasite of a limited host range and are grouped into forma specialis, races and vegetative compatibility groups (VCGs) depending on plant species. Describing the main approaches developed to identify different pathogenic strains and the major molecular tools used to identify the different Fusarium oxysporum forms could be of valuable assistance to farmers and promote new control measures to limit the effect of this disease especially for development country.

The agricultural sector in Tunisia constitutes an important income source in the national economy. In addition agriculture provides a major source of livelihood of the rural and the agricultural populations representing around 24% of the total population in Tunisia. The relative food production losses attributed to diseases were estimated to reach 10% worldwide. These biotic constraints could seriously compromise food security. Fusarium oxysporum Schlecht is an economically important soil borne pathogen with worldwide distribution (Armstrong and Armstrong 1981). In Tunisia, during 2000-2001 F. oxysporum f. sp. radicis-lycopersici caused heavy losses reaching 90% of tomato crops in most geothermal greenhouses and 60% in the field (Hajlaoui et al. 2001; Hibar 2002). As F. oxysporum f. sp. melonis are among the most serious diseases of melon culture in Tunisia and yield losses as high as 20% have been reported. In addition, F. oxysporum f. sp tuberosi is a serious disease of potato plants and causes dry rot of tubers and vascular wilts in Tunisia (Daami-Remadi and Mahjoub 2004). F. oxysporum species also includes nonpathogenic strains which were extensively studied for their antagonistic activity against various formae speciales of F. oxysporum; while others have veterinary and/or medical significance (Pereiro et al. 2001). Pathogenic strains causes vascular wilt on a wide range of plants, but others infect the cortical tissues and cause root rot, basal rot or bulb rot. The mechanisms of pathogenicity and symptom induction by this fungus are poorly understood, but in general, symptoms include vascular browning, leaf epinasty, stunting, progressive wilting, defoliation and plant death (Agrios 2005). Most strains assigned to these species are saprotrophic. F. oxysporum is classified in the subdivision Deuteromycotina, because it lacks sexual reproduction. This fungus is unique in its asexual reproduction (Nelson et al. 1983). It produces three asexual spores: microconidia, macroconidia, and chlamydospores. Microconidia are ellipsoidal and have no or one septum. Macroconidia are falcate and have three or four septa. Conidiogenesis of microconidia and macroconidia are phialidic. Microconidia are formed from phialides in false heads by basipetal division. And finally, chlamydospores spores are more or less sphaerical, approximately 7-16 µ in diameter. They occur often as single or double chlamydospores. They form in conidia or in hyphae, either terminally or intercalary (Smith 2007). This complex of asexual species is composed of numerous strains classified into several forma specials based on pathogenic criteria. Forma specialis are further subdivided into physiological races according to cultivar specificity.

Reduced yielding ability, lower disease management pattern and lack of available financial resources are among the most important factors that limit disease identification and magnitude. However, rapid and reliable detection and identification of potential plant pathogens is required for taking appropriate and timely disease management measures (Lievens 2008). In practice, diagnosis of plants infected by F. oxysporum is carried out by combining diagnostic symptoms observed on the host with the presence of the fungus located often on discoloured tissues. However, determining the forma specialis should be delayed till bioassays were performed with a pure culture of the fungus on plants of the host (Bayeen 2000). Moreover, difficulties faced by plant pathologists include reliable identification of the causal agents of a disease according to epidemiological related parameters such as: severity, levels species, formae speciales, pathovars, biovars and races. Properties of these characters would foster appropriate and relevant control measures (Strange and Scott 2005). However, the aim of this review is to present the advances of molecular tools to identify plant pathogenic F. oxysporum, and to discuss haw this knowledge can help in managing the pathogen.

Considerable attention has been paid to the genetic basis for resistance and tolerance of plants to fungal wilt diseases associated with F. oxysporum pathogenicity determinants. The virulent wilt pathogens of F. oxysporum are not easily distinguishable in culture from common soil-borne. F. oxysporum propagules are unevenly distributed in field soil (Trujillo and Snyder 1963) and varying from one area in the field to another depending on the ability to establish a colony at the site. The effect of soil moisture, temperature and the antagonistic microflora are among the major factors governing the establishment of colony at the infection site along the resistance of the host. In addition, the non-pathogenic strains can easily be converted to pathogenic strains by transferring lineage-specific genes containing 95% of all DNA transposons (Van der Does et al. 2008) or even chromosomes. Other factors, such as symbiosis with bacteria, can also explain the pathogenicity or non-pathogenicity of some strains of F. oxysporum (Minerdi et al. 2008). Ectosymbiotic bacteria could render silent expression of genes involved in fungal pathogenesis, and change the characteristics of the hyphae. However, factors such as coevolution with the plant host and the spread of virulence determinants via processes such as parasexuality, heterokaryosis, and sexual recombination also have been implicated in the evolution and imergence of new pathogens (Kistler et al. 2000). However, individual pathogenic strains within the species have a limited host range. Strains with similar or identical host ranges are assigned to intraspecific groups, called forma specialis. Although multiple point mutations or transposition events could enable independent acquisition of pathogenicity of F. oxysporum derived strains. Therefore the same host infected by strains with a different phylogeny. However, parasexuality can occur in F. oxysporum (Leslie 1993) and may have contributed to lateral transfer of pathogenicity genes to distantly related strains (Bayeen et al. 2011).

F. oxysporum includes over 120 different formae speciales classified on the basis of specificity towards their host species. The forma specialis are distinguished by the ability of their members to cause a wilt disease on a limited taxonomic range of host plant. They differ in symptomatology, epidemiology and cultivar susceptibility, and can be distinguished by pathogenicity tests with appropriate hosts (Vakalounakis and Fragkiadakis 1999). These tests are protracted and occasionally inconclusive. For exemple F. oxysporum f. sp. cucumerinum and F. oxysporum f. sp. lycopersici only cause disease on cucumber and tomato respectively. In addition, in some cases,one simple forma specialis infects a wide array of generea or species of familly exemple Cucurbitaceae and with a great pathogenic variation (Kim et al. 1993). In other cases, differents forma specialis share the same host plant (Nomura 1993). For example F. oxysporum f. sp. radicis-cucumerinum and F. oxysporum f. sp. radicis-lycopersici which, apart from infecting cucumber and tomato respectively, can cause root and stem rot on multiple hosts from different plant families. These phenomena suggest that genetic variation exists within each forma specialis suggesting that host plants would be closely related genetically and share comparable characteristics to pathogenicity (Kim et al. 1993).

The origin of pathogenic variation has intrigued plant pathologist since the discovery of races in the early 20th century. F. oxysporum isolates from a particular forma specialis can be further subdivided into physiological races with a characteristic pattern of virulence on differential host cultivars. The genetic mechanisms of race-cultivar specificity in F. oxysporum are largely unknown, mainly due to the lack of a sexual stage in this fungus which prevents genetic analysis. Therefore, the identification of pathogenic races is important for breeding for disease resistance, and for the efficient use of available resistant cultivars. However, mutations and recombination among avirulence (avr) genes in sexuality reproducing pathogens have been postulated as the mechanisms responsible for variation in races (Jiménez-Gasco et al. 2004). Some forma specialis have evolved to one race and therefore are monophyletic (Baayen et al. 2000), whereas others have evolved to multiple and independant races and therefore are polyphyletic (O’Donnell et al. 1998). In addition, F. oxysporum f. sp. vasinfectum that cause wilt disease of coton revealed that races of this forma specialis are polyphyletic (Skovgaard et al. 2001). However, F. oxysporum f. sp ciceris that causes Fusarium wilt disease of chikpeas suggesting monophyletic races (Jiménez-Gasco et al. 2002).

F. oxysporum strains have been grouped into vegetative compatibility groups (VCGs) based on the ability of strains to form heterokaryons. Strains that belong to the same VCG normally have identical alleles at their compatibility loci, enabling the exchange of nuclear material (Puhalla 1985). Some forma specialis harbor a single VCG many comprise up to 10 or more VCGs, of which only a few are common and widespread (Bayeen et al. 2011). Many forma specialis, and even some races, include strains that belong to multiple VCGs, suggesting independent origins within the F. oxysporum species complex. Since F. oxysporum lacks a sexual stage, genetic interaction is thought to be restricted primarily to within a VCG. Thus, VCGs may represent genetically isolated populations that are correlated with specific traits such as pathogenicity. Most of the studies indicated a limited number of distinct VCGs within a formae speciales. In contrast, 97 strains of F. o. f. sp. asparagi were found to include a minimum of 42 VCGs (Elmer and Stephens 1989), and 110 strains of F. oxysporum isolated from celery roots where only 14 VCGs were found nonpathogenic on these roots (Correll et al. 1986).

Determination of Fusarium oxysporum races is generally achieved using pathogenicity assays on different cultivars of a single plant species. In some cases, pathogenicity of F. oxysporum isolates could be linked to the presence of certain transposons. In addition, this transposon provided the source of target sequences to discriminate certain races of F. oxyporum dianthi (races 1, 2 and 8), whereas a copy of the transposon Impala was used to identify 4 strains of this forma specialis (Chiocchetti et al. 1999). In addition, the genomic regions between the insertions of long terminal repeat retrotransposon copies were used to develop a diagnostic assay for F. oxysporum f. sp. lactucae race 1 strains (Teunissen et al. 2003).

Puhalla (1985) used nit mutants to test for vegetative compatibility among 21 strains of F. oxysporum. He found a correlation between VCG and f. sp. i.e. members of the same VCG belong to the same f. sp. Vegetative Compatibility tests. Therefore, this method has been reported as a powerful tool for studying genetic diversity in F. oxysporum (Correll et al. 1987). The availability of VCG-specific PCR primers is a welcome addition to classical diagnosis as a service to private industry, and is of considerable importance for phytosanitary diagnosis. For example, the bioassay step required for phytosanitary diagnosis of Bayoudh disease of date palm takes several months, and can now be replaced by a 1-day PCR reaction (Femandez et al. 1998).

Genomics research can be used for detection of large number of pathogens. With such high-throughput technologies, integration of more strains into the detection systems of F. oxysporum. should become possible and identification of pathogens is likely to become an easier task. However, they should be used in combination with the knowledge of the crop and understanding of the biology of the different formae speciales and the ecology of the diseases. We wish that this review will help plant pathologists, particularly those in developing countries especially in Tunisia, to focus on the acquisition of such data. Moreover, further national campaigns or private services are requested to effectively implement a strategic implementation and measures to reduce the effect of wilt disease on the most important crops.

Puhalla JE (1985) Classification of strains of Fusanum oxysporum on the basis of the vegetatives compatibility. Canadian Journal of Botany 63 : 179-183.

Smith SN (2007) An overview of ecological and habitat aspects in the genus Fusarium with special emphasis on the soil-borne pathogenic forms. Plant Pathology Bulletin 16, 97-120.