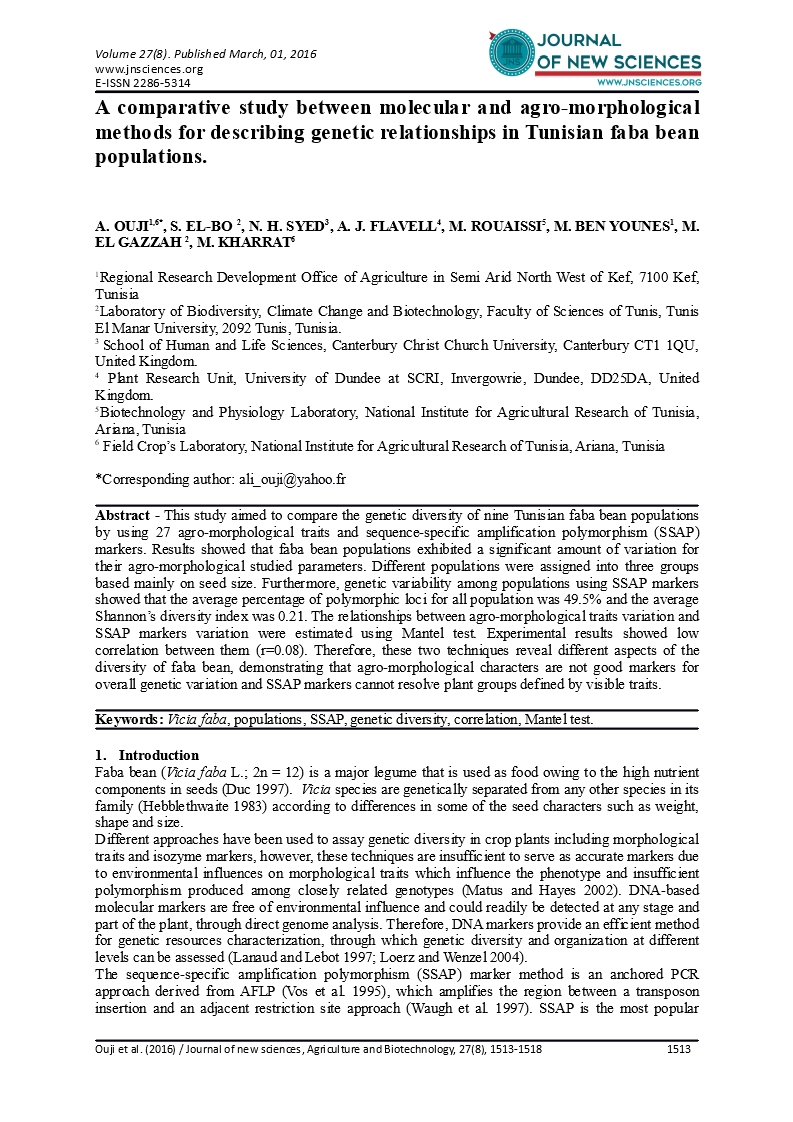 Faba bean (Vicia faba L.; 2n = 12) is a major legume that is used as food owing to the high nutrient components in seeds (Duc 1997). Vicia species are genetically separated from any other species in its family (Hebblethwaite 1983) according to differences in some of the seed characters such as weight, shape and size.

Different approaches have been used to assay genetic diversity in crop plants including morphological traits and isozyme markers, however, these techniques are insufficient to serve as accurate markers due to environmental influences on morphological traits which influence the phenotype and insufficient polymorphism produced among closely related genotypes (Matus and Hayes 2002). DNA-based molecular markers are free of environmental influence and could readily be detected at any stage and part of the plant, through direct genome analysis. Therefore, DNA markers provide an efficient method for genetic resources characterization, through which genetic diversity and organization at different levels can be assessed (Lanaud and Lebot 1997; Loerz and Wenzel 2004).

The sequence-specific amplification polymorphism (SSAP) marker method is an anchored PCR approach derived from AFLP (Vos et al. 1995), which amplifies the region between a transposon insertion and an adjacent restriction site approach (Waugh et al. 1997). SSAP is the most popular transposon-based molecular marker method. Most studies, using long terminal repeat (LTR) retrotransposon based SSAP marker systems have suggested that the performance of an SSAP marker system in a species depends upon the particular retrotransposon chosen. Knowledge of genetic variation and relationships between accessions or genotypes is important: (i) to understand the genetic variability available and its potential use in breeding programs, (ii) to estimate any possible loss of genetic diversity, (iii) to offer evidence of the evolutionary forces shaping the genotypic diversities, and (iv) to choose genotypes to be given priority for conservation (Thormann et al. 1994). The aim of this study is to compare the genetic diversity of nine Tunisian faba bean populations by using agro-morphological traits and sequence-specific amplification polymorphism (SSAP) markers and evaluate the potential of these markers in assessing the genetic variation of populations in order to understand the degree of congruency.

Nine Tunisian populations were used in this study (Table1). They belong to the major and minor botanical classes of faba bean.

Plant DNAs were extracted from the leaves of faba bean by the method described by Torres et al. (1993). Three LTRs were used in this study (PDR1, Tps19 and Tvf4). For all primers, the SSAP procedure was performed as described by Syed et al. (2005) and presented by Ouji et al. (2012).

The relationship between the agro-morphological distance matrix and the distance obtained with SSAP markers was analyzed. The correspondence between pairs of matrices based on the agro-morphological and molecular distances was tested with Mantel Z-statistic (Mantel 1967) using MxComp procedure from NTSYS 2.02 program (Rholf 1993) with 1000 permutations.

Analysis of variance revealed a high significant variation for all traits studied except for number of stems per plants at flowering. Results illustrated in Table 2 showed that the number of fructufal nodes per plant, the number of pods per plant, seeds number per plant, 100 seeds weight, total of inflorescence per plant, number of pods per primary stem, number of fructufal nodes per primary stem and seed width exhibited strong and positive association with yield. These traits were used as selection criteria for improving faba bean. Dendrogram, calculated using Nei's (1978) genetic distance and based on the agro-morphological data using UPGMA method, assigned the different populations into three groups based mainly on seed size (Figure 1 A). Agronomic traits in faba bean, as in other species, are usually complex characters determined by several interacting components, some of which are under polygenic control (Avila et al. 2005). This fact greatly hampers the selection process and the success of traditional breeding programs. Since only a wide genetic base gives the opportunity to select genotypes with a trait of interest, it is essential to understand the extent and distribution of genetic variation.

The dendrogram grouping the populations by unweighted pair-group method with arithmetic averages (UPGMA) method revealed three main clusters (Figure 1 B). The local major faba bean ‘Batata’ was the most divergent population and was separated from other population. The SSAP marker system is more informative than AFLP for studying genetic diversity, since it provides higher levels of polymorphism as in other species such as in barley (Waugh et al. 1997); in pea (Ellis et al.1998) and in tomato and pepper (Tam et al. 2005). However, we have not tested whether this is also true in Vicia faba or not.

The comparison of different methods of estimating the genetic diversity could define their usefulness in plant breeding and conservation programs. In this study, in order to investigate the genetic relationships among nine faba bean populations and to compare the extent of agreement among dendrograms, derived from agro-morphological traits and molecular markers, a distance matrix was constructed for each assay and compared using the Mantel matrix correspondence test. The Mantel Z test statistics showed low correlation (r=0.08) between the matrices based on SSAP markers and agro morphological traits (Figure 2). In fact, calculated distances between populations by both methods are different. This large variation is clearly observed with the population ‘Batata’ that showed no genetic structure similarity with the other populations using SSAP markers.

Nei M (1978) Estimation of average heterozygosity and genetic distance from a small number of individuals. Genetics, 89: 583-590.

Semagn K (2002) Genetic relationships among ten encoded types as revealed by a combination of morphological, RAPD and AFLP markers. Hereditas 137: 149-156.