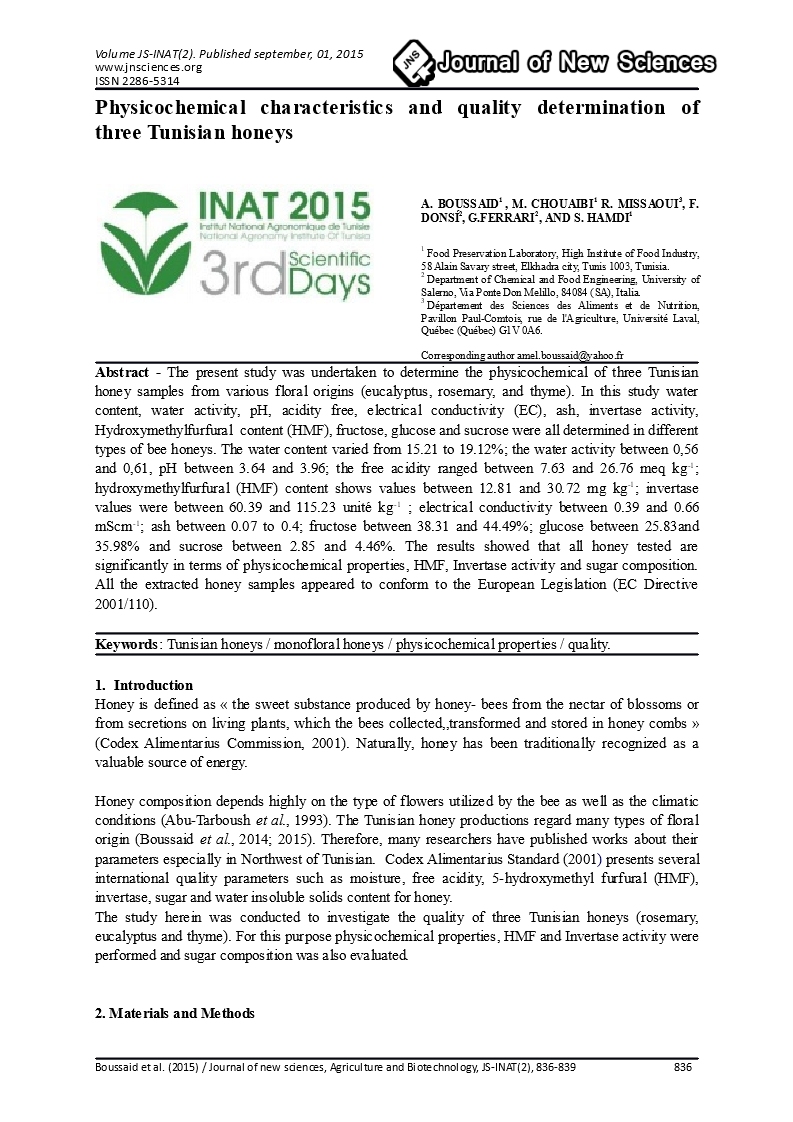 Abstract - The present study was undertaken to determine the physicochemical of three Tunisian honey samples from various floral origins (eucalyptus, rosemary, and thyme). In this study water content, water activity, pH, acidity free, electrical conductivity (EC), ash, invertase activity, Hydroxymethylfurfural content (HMF), fructose, glucose and sucrose were all determined in different types of bee honeys. The water content varied from 15.21 to 19.12%; the water activity between 0,56 and 0,61, pH between 3.64 and 3.96; the free acidity ranged between 7.63 and 26.76 meq kg-1; hydroxymethylfurfural (HMF) content shows values between 12.81 and 30.72 mg kg-1; invertase values were between 60.39 and 115.23 unité kg-1 ; electrical conductivity between 0.39 and 0.66 mScm-1; ash between 0.07 to 0.4; fructose between 38.31 and 44.49%; glucose between 25.83and 35.98% and sucrose between 2.85 and 4.46%. The results showed that all honey tested are significantly in terms of physicochemical properties, HMF, Invertase activity and sugar composition. All the extracted honey samples appeared to conform to the European Legislation (EC Directive 2001/110).

Honey is defined as « the sweet substance produced by honey- bees from the nectar of blossoms or from secretions on living plants, which the bees collected,,transformed and stored in honey combs » (Codex Alimentarius Commission, 2001). Naturally, honey has been traditionally recognized as a valuable source of energy.

The study herein was conducted to investigate the quality of three Tunisian honeys (rosemary, eucalyptus and thyme). For this purpose physicochemical properties, HMF and Invertase activity were performed and sugar composition was also evaluated.

Water content was measured by a Carl Zeiss 16531 refractometer at 20 °C and the corresponding water content was calculated using the Association of Official Analytical Chemists method (AOAC, 1990). The ash content was determined by burning the samples in a muffle furnace at 500 °C for 6 h. The pH, however, was measured using a Mettler Toledo pH meter (California, USA). The pH probe was immersed in a 250 mL beaker that contained a solution of 4 grams of honey dissolved in 30 mL of ultrapure water. Free acidity was determined according to the AOAC method (AOAC, 2000), by the titrimetric method. To make things clear, the electrode of the pH meter was immersed in the solution, stirred with a magnetic stirrer and titrated to pH 8.5 by adding a 0.05 N of NaOH solution. The electrical conductivity (EC) of a honey solution, at 20% (w/v) (dry matter basis) in ultrapure water, was measured at 20 °C using a Consort conductometer (Consort C830, Belgium). The results were expressed as milli-Siemens per centimeter (mS/cm). The water activity (aw) was determined at 25 ± 0.02 °C using an AquaLab water activity meter (AquaLab CX2T, Decagon Devices, USA).

HMF was determined according to the European commission honey method (Bogdanov et al., 1997). Briefly, 20 g of honey samples was dissolved in 100 ml Milli-Q water, filtered througha 0.22 mL nylon filter into an HPLC vial, capped and injected(20 ll) into the HPLC. HMF concentration in the honey is calculated by comparing the peak area to that of the standard staking into account the dilutions. There are a linear relationship between the concentration and the peak area and the results were expressed as mg/kg honey.

Invertase activity was spectrophotometrically measured with 4-nitrophenyl-a-D-glucopyranoside and the results are expressed in international units (IU).

The sugar composition was determined by an HPLC (Shimadzu,Tokyo, Japan) equipped with a refractive index detector (HPLC-RI) at 30 _C. A honey sample (1 g) was dissolved in19 mL Milli-Q water, filtered through a 0.22 mL nylon filterinto an HPLC vial, capped and injected (20 ll) into the HPLC. The HPLC column was Supelcogel C-610H, 30 cm, 7.8 mmI.D. fitted with a guard column Supelguard C-610H5 cm,4.6 mm I.D. Col: H + 11,855. The mobile phase was 0.005M sulfuric acid at a flow rate of 0.75 mL/min. The external calibration curves produced by standard solutions were

used to quantify the amount of sugars in the samples (Bonta et al., 2007). Honey sugars are identified and quantified by the method of external etalonanage by comparing their retention times and their peak areas with those of standard sugars. The results were expressed as gram sugar per 100 g of honey.

The physicochemical parameters of the three Tunisian honeys namely rosemary, thyme and eucalyptus were analyzed as shown in Table 1. The results showed that water contents, determined by conventional drying, were all below 20%, the maximum value established by Codex standard for honey (2001). It is well-known that water level of honey is an indicator of honey freshness, shelf-life and resistance against yeast fermentation (Corbella and Cozzolino, 2006).The water content found in the above honey samples ranged from 17.21 to 19.12%. Evidently, these samples are within the range of the required standards (⩽20%) according to the International Regulations of Quality (Codex Alimentarius Commission, 2001). The ash content is an indicator of the mineral content. It is considered as a quality criterion indicating the possible botanical origin of honey. Its value in the analysed samples ranged from 0.07% to 0.4% (Table 1). The electrical conductivity (mS/cm) in honey samples varied in the range of 0.39 to 0.66 mS cm−1. Electrical conductivity is a property of electron mobility and is largely correlated with honeys’ mineral salt, organic acid and protein levels. Electrical conductivity is a significant discriminating parameter for honeydew honeys, which have greater conductivity than floral honeys (Alqarni, Owayss, Mahmoud, & Hannan, 2012) These results conform with previous studies ( Kaškonienė et al., 2010). The water activity of the honey samples varied from 0.56 and 0.61 (Table 1). It is an important factor, which governs the food stability by preventing or limiting microbial growth. The osmotolerant yeasts are able to grow at a minimal water activity of 0.6 (Chirife et al., 2006).

Another important parameter during the extraction and storage of honey is the pH value. It influences honey texture, stability and shelf life (Terrab et al., 2002). As shown in Table 1, all the examined honeys had an acidic character. Their pH values ranged from 3.64 to 3.96. These values were similar to those previously reported in Algerian, Spanish and Portugal honeys that have been found to vary between 3.50 and 4.58 (Rashed and Soltan, 2004, Feás et al., 2010 and Ouchemoukh et al., 2007).

In the three Tunisian honey samples, the free acidity of honey ranged from 7.63 to 26.76 meq/kg honeys (Table 1). According to the obtained results of free acidity, none of the analyzed samples exceeded the limit of 40 meq kg−1 as required by the international regulations ( Bogandov et al., 1999).

5-HMF is a good indicator for honey freshness and/or overheating.5-HMF can form at even low temperatures in acidic conditions by dehydration of sugar (Lee and Nagy, 1990), samples analyzed in this study can be considered as fresh honeys and meet the standards established by Codex Alimentarius (2001) since 5-HMF contents of the honeys varied between 12.81 to 27.73 mg/kg. The highest HMF was observed in eucalyptus followed by thyme, and rosemary honeys. A parameter of the freshness of honey is the amount of HMF contained. This, a non-enzymatic Maillard reaction product, is accepted at values below 0–40 mg/kg in honey codices. HMF values for all honeys in this study, apart from heather, were below 40 mg/kg.

Invertase is a natural honey enzyme which is commonly used in Europe as a determinant of freshness. Its content depends on the geographic and floral origins of the product, as well as on its freshness. Table 1 illustrates that invertase activity values ranged from 60.39 to 115.23 unit/kg honey.

These results agree with those reported by authors who have evaluated the activity of invertase in nectar honeys (Persano Oddo et al., 1999 and Manzanares et al., 2011).

The fructose, glucose and sucrose concentrations of the honey samples are presented in Table 2. Glucose and fructose were the major carbohydrates of all honey samples analyzed, fructose was the major sugar. Fructose concentrations of the samples ranged from 38.31% to 44.49%, while glucose contents varied between 25.83% and 35.98%. The basic monosaccharides of honey are the reducing sugars fructose and glucose. F + G levels in this study ranged between 65.93 and 80.47%, which was in accordance with the legislations of Codex Alimentarius (2001) (higher than 60%), while the F/G ratio ranged between 1.11 and 1.52. Sucrose was detected in very few honeys, and the values determined were below 5%. Sucrose contents of the honey samples were in the range of 2.85% and 4.46%, all of which were in conformity with the limits established by the European Codex Honey Standards, which are 5 g/100 g for honeys (Codex Alimentarius, 2001).

The results shows that all the parameters are agree with the European Codex Honey Standards, in fact

the knowledge of physicochemical of three Tunisian honeys is very important in order to set up certification marks and improve the local beekeeping, also for possible export.

Corbella E and Cozzolino D (2006). Classification of the floral origin of Uruguayan honeys by chemical and physical characteristics combined with chemometrics.LWT – Food Sci.Technol. 39, 534–539.