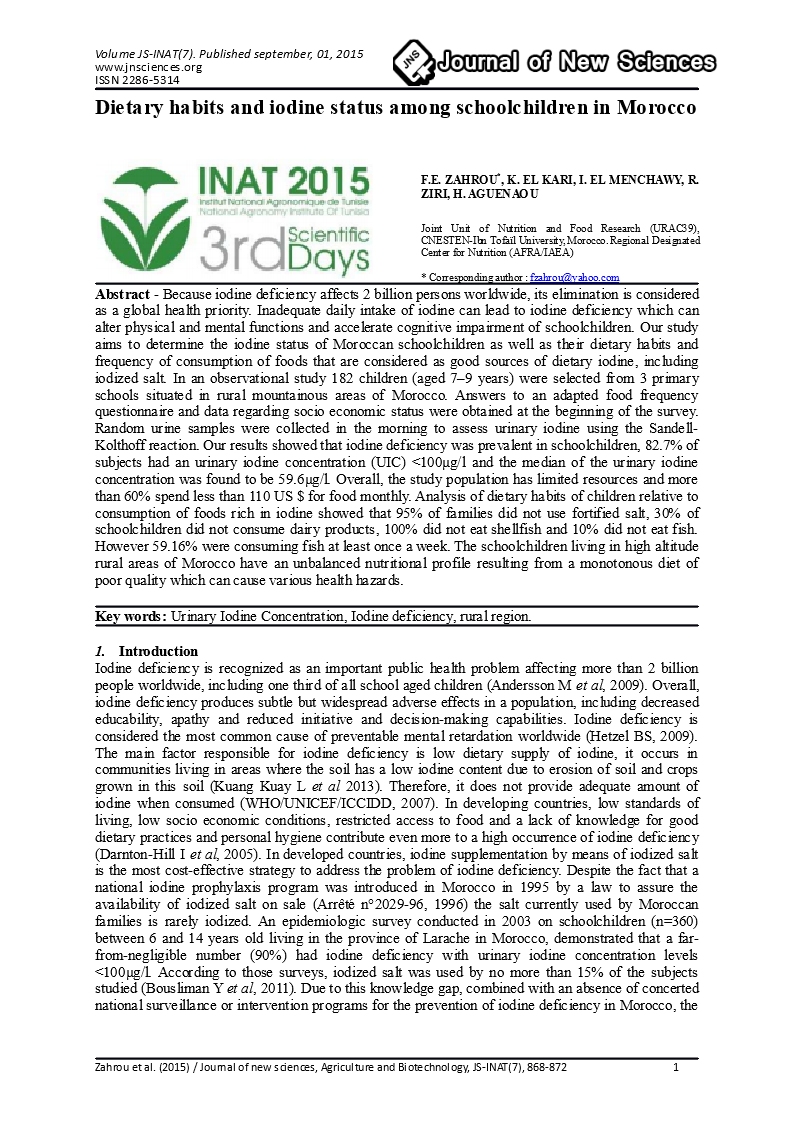 Abstract - Because iodine deficiency affects 2 billion persons worldwide, its elimination is considered as a global health priority. Inadequate daily intake of iodine can lead to iodine deficiency which can alter physical and mental functions and accelerate cognitive impairment of schoolchildren. Our study aims to determine the iodine status of Moroccan schoolchildren as well as their dietary habits and frequency of consumption of foods that are considered as good sources of dietary iodine, including iodized salt. In an observational study 182 children (aged 7–9 years) were selected from 3 primary schools situated in rural mountainous areas of Morocco. Answers to an adapted food frequency questionnaire and data regarding socio economic status were obtained at the beginning of the survey. Random urine samples were collected in the morning to assess urinary iodine using the Sandell-Kolthoff reaction. Our results showed that iodine deficiency was prevalent in schoolchildren, 82.7% of subjects had an urinary iodine concentration (UIC) <100µg/l and the median of the urinary iodine concentration was found to be 59.6µg/l. Overall, the study population has limited resources and more than 60% spend less than 110 US $ for food monthly. Analysis of dietary habits of children relative to consumption of foods rich in iodine showed that 95% of families did not use fortified salt, 30% of schoolchildren did not consume dairy products, 100% did not eat shellfish and 10% did not eat fish. However 59.16% were consuming fish at least once a week. The schoolchildren living in high altitude rural areas of Morocco have an unbalanced nutritional profile resulting from a monotonous diet of poor quality which can cause various health hazards.

Iodine deficiency is recognized as an important public health problem affecting more than 2 billion people worldwide, including one third of all school aged children (Andersson M et al, 2009). Overall, iodine deficiency produces subtle but widespread adverse effects in a population, including decreased educability, apathy and reduced initiative and decision-making capabilities. Iodine deficiency is considered the most common cause of preventable mental retardation worldwide (Hetzel BS, 2009). The main factor responsible for iodine deficiency is low dietary supply of iodine, it occurs in communities living in areas where the soil has a low iodine content due to erosion of soil and crops grown in this soil (Kuang Kuay L et al 2013). Therefore, it does not provide adequate amount of iodine when consumed (WHO/UNICEF/ICCIDD, 2007). In developing countries, low standards of living, low socio economic conditions, restricted access to food and a lack of knowledge for good dietary practices and personal hygiene contribute even more to a high occurrence of iodine deficiency (Darnton-Hill I et al, 2005). In developed countries, iodine supplementation by means of iodized salt is the most cost-effective strategy to address the problem of iodine deficiency. Despite the fact that a national iodine prophylaxis program was introduced in Morocco in 1995 by a law to assure the availability of iodized salt on sale (Arrêté n°2029-96, 1996) the salt currently used by Moroccan families is rarely iodized. An epidemiologic survey conducted in 2003 on schoolchildren (n=360) between 6 and 14 years old living in the province of Larache in Morocco, demonstrated that a far-from-negligible number (90%) had iodine deficiency with urinary iodine concentration levels <100µg/l. According to those surveys, iodized salt was used by no more than 15% of the subjects studied (Bousliman Y et al, 2011). Due to this knowledge gap, combined with an absence of concerted national surveillance or intervention programs for the prevention of iodine deficiency in Morocco, the objective of the current study was primarily to expand our knowledge on the prevalence of this medical condition by assessing the current iodine deficiency and to ascertain if and how iodine status is influenced by different dietary habits. The results obtained will guide the public health policy to a better understanding of the problem and consequently the development of appropriate intervention strategies, in order to tackle efficiently these issues early in life.

This is an observational study that was conducted in February 2012, in a rural mountainous area of Morocco. A total of 182 schoolchildren aged 7-9 yrs were recruited from three primary satellite-schools. At recruitment, a meeting with parents and school’s officials was undertaken to explain the purpose of the study and to get the parents’ consents. To be included in the study, children had to be aged between 7 and 9 years and should not take supplements during the study period. Children with severe malnutrition needing nutritional rehabilitation, or having chronic or severe illness requiring hospitalization or treatment were excluded from the study. The study was conducted with respect to ethical and legal aspects, and written informed consent was obtained from each parent of recruited children.

At recruitment, data regarding socio economic status and a qualitative food frequency questionnaire were administered to each child. Random urine samples were collected in the morning to assess urinary iodine using the Sandell-Kolthoff reaction.

Data regarding socio-economic status were collected at the beginning of the study from parents in all subjects groups, using questionnaires including level of parental education and monthly food expenditure.

Dietary patterns of the study subjects and the frequency of consumption of certain food were assessed via the Food Frequency Questionnaire method which was completed by the participants in the presence and assistance of a trained dietitian. The Food Frequency Questionnaire designed to assess frequency of consumption, over the previous one month, of foods or food groups that are good sources of dietary iodine, including iodized salt. The three main components of the Food Frequency Questionnaire are the list of foods (groups that are good sources of dietary iodine (Skeaff SA et al, 2002; Watutantrige FS et al, 2013)), frequency of consumption (never, number of times per month, week or day) and the estimation of portion size consumed either in household measures or grams (Pérez Rodrigo C et al, 2015).

All statistical analyses were performed using Statistical Package for the Social Sciences (SPSS, version 20.0). The distribution normality of quantitative variable was tested by Kolmogorov –Smirnov test. The variables non-normally distributed were presented as median (interquartile range). Nominal variables are presented as frequency and Chi-square test was used to test independence between them, in the case of cells with a theoretical frequency n < 5, we take the p-value of Fisher. Two-sided p-values <0.05 were considered significant.

The socioeconomic characteristics are presented in table 1. There were no significant differences in socioeconomic characteristics concerning level of mother education between the different classes of iodine deficiency (χ2; p=0.919). The above table shows the majority of mothers are illiterate and their children are iodine deficient. Moreover, the 3 classes of iodine deficiency (severe, moderate and mild) are more prevalent in families spending less than US$ 251 for food compared to those spending more. (Table 1)

Table 2 shows the frequency of consumption of foods that are good sources of dietary iodine. Analysis of dietary habits showed that 95% of families did not use fortified salt, 30% of schoolchildren did not consume dairy products, 100% did not eat shellfish and 10% did not eat fish. However 59.16% were consuming fish once a week (Table 2).

In the present study, over 30% of the children had levels below this figure. A study conducted in Sydney, Australia also found mild iodine deficiency as determined by casual urine samples in school-aged children (Li M et al, 2001). This is not surprising given the limited sources of iodine found in this rural area diet. Firstly, this mountainous region has low soil iodine levels. Secondly, the use of iodized salt in the households is very low. Close to 95% of the households surveyed in this study did not use iodized salt. Thirdly, there have been some concerns that the level of iodine in iodized salt is lower than the value recommended by legislation. Effectively, in a study performed in 1998 in the region of Rabat-Kénitra, Morocco, of all the iodized salt analyzed, no sample satisfied the norm (80±10 mg of iodine/kg) and only 17.8% were compliant to the minimal value required by legislation at the time of distribution (50 mg of iodine/kg) (Zahidi A et al, 2002).

Similarly, an epidemiological survey conducted in 2003 in the province of Larache, Morocco, revealed that 90% of people had iodine deficiency and only 15% of salt consumed by households contained iodine and none of them responded to the technical specifications (Bousliman Y et al, 2011). Dairy products and meat products represent excellent sources of iodine. However, the cost of these products often restricts access to the poorest in developing countries (Bhargava A et al, 2001). In the present study, a qualitative Food Frequency Questionnaire assessed the frequency of consumption of food that is considered as good sources of iodine. We found that the majority of the children consumed milk and dairy products on a daily basis, while the remainder consumed such foods weekly.

In our study, the majority of children ate meat, chicken, fish and eggs on a weekly basis. We believe that our results indicate that dairy products probably make the largest contribution to total iodine intake in Moroccan schoolchildren. Furthermore, our results highlight the irregular use of iodized salt by Moroccan schoolchildren and indicate that iodized salt is unlikely to be making a significant contribution to total iodine intake.

In conclusion, our study demonstrates that the population of rural region of Morocco is still characterized by mild iodine deficiency. To maintain normal growth and development it is important for children to obtain sufficient amounts of iodine in the diet. Hence, it seems prudent to increase the iodine intake of children in Morocco. The level of individual awareness regarding the importance of iodine is nevertheless insufficient, and other public programs and strategies are indeed warranted to ameliorate subject knowledge and practices.

We would like to gratefully acknowledge the contributions of schoolchildren who participated in this study, their parents, teachers, health workers, and local authority’s data management and other support staff.

Bhargava A, Bouis H and Scrimshaw N (2001): Dietary intakes and socioeconomic factors are associated with the hemoglobin concentration of Bangladeshi women. J. Nutr. 131, 758–764.

WHO UNICEF & ICCIDD (1994) Indicators for assessing iodine deficiency disorders and their control through salt iodization. WHO=NUT=94.6. Geneva: WHO.