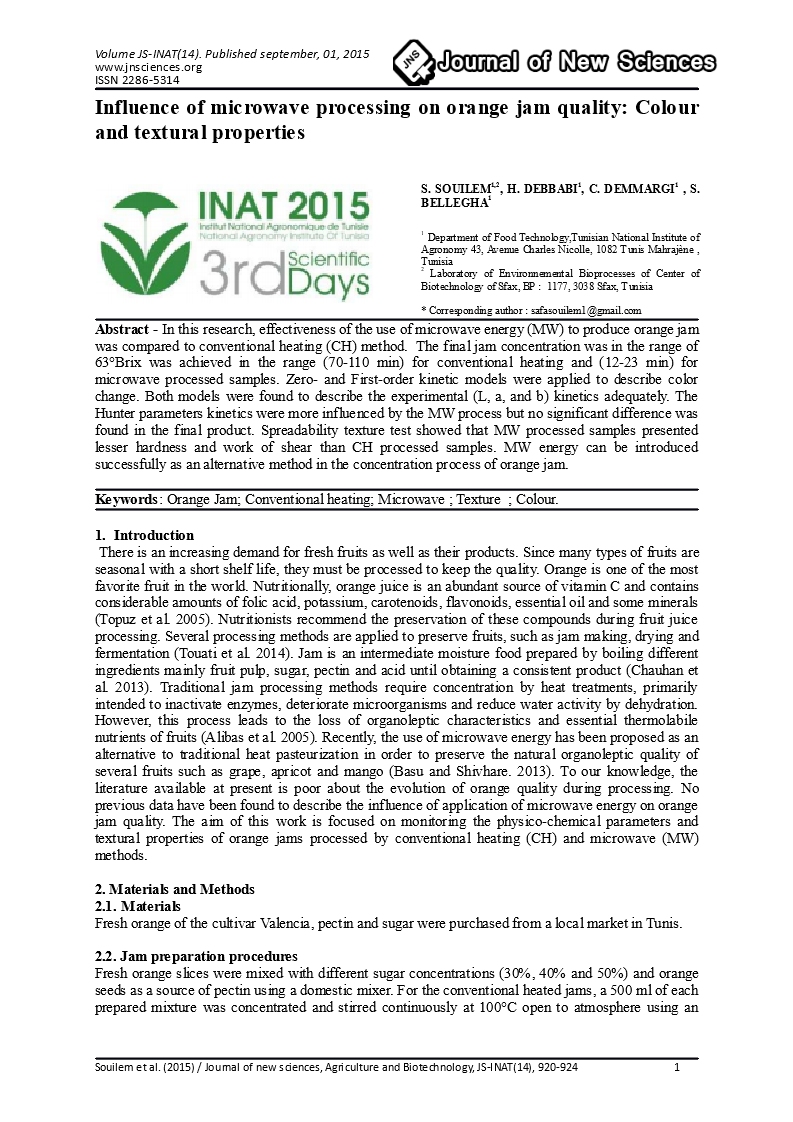 2 Laboratory of Environnemental Bioprocesses of Center of Biotechnology of Sfax, BP : 1177, 3038 Sfax, Tunisia

Abstract - In this research, effectiveness of the use of microwave energy (MW) to produce orange jam was compared to conventional heating (CH) method. The final jam concentration was in the range of 63°Brix was achieved in the range (70-110 min) for conventional heating and (12-23 min) for microwave processed samples. Zero- and First-order kinetic models were applied to describe color change. Both models were found to describe the experimental (L, a, and b) kinetics adequately. The Hunter parameters kinetics were more influenced by the MW process but no significant difference was found in the final product. Spreadability texture test showed that MW processed samples presented lesser hardness and work of shear than CH processed samples. MW energy can be introduced successfully as an alternative method in the concentration process of orange jam.

There is an increasing demand for fresh fruits as well as their products. Since many types of fruits are seasonal with a short shelf life, they must be processed to keep the quality. Orange is one of the most favorite fruit in the world. Nutritionally, orange juice is an abundant source of vitamin C and contains considerable amounts of folic acid, potassium, carotenoids, flavonoids, essential oil and some minerals (Topuz et al. 2005). Nutritionists recommend the preservation of these compounds during fruit juice processing. Several processing methods are applied to preserve fruits, such as jam making, drying and fermentation (Touati et al. 2014). Jam is an intermediate moisture food prepared by boiling different ingredients mainly fruit pulp, sugar, pectin and acid until obtaining a consistent product (Chauhan et al. 2013). Traditional jam processing methods require concentration by heat treatments, primarily intended to inactivate enzymes, deteriorate microorganisms and reduce water activity by dehydration. However, this process leads to the loss of organoleptic characteristics and essential thermolabile nutrients of fruits (Alibas et al. 2005). Recently, the use of microwave energy has been proposed as an alternative to traditional heat pasteurization in order to preserve the natural organoleptic quality of several fruits such as grape, apricot and mango (Basu and Shivhare. 2013). To our knowledge, the literature available at present is poor about the evolution of orange quality during processing. No previous data have been found to describe the influence of application of microwave energy on orange jam quality. The aim of this work is focused on monitoring the physico-chemical parameters and textural properties of orange jams processed by conventional heating (CH) and microwave (MW) methods.

Fresh orange of the cultivar Valencia, pectin and sugar were purchased from a local market in Tunis.

Fresh orange slices were mixed with different sugar concentrations (30%, 40% and 50%) and orange seeds as a source of pectin using a domestic mixer. For the conventional heated jams, a 500 ml of each prepared mixture was concentrated and stirred continuously at 100°C open to atmosphere using an electric heater (VELP Scientifica, Italy) until reaching 60-65°Brix. For microwave processed jams, a programmable domestic microwave oven (Samsung 580, CHINA) was used with an output of 700 W. A 500 ml of each mixture was put on the center of the microwave cavity turn table. Processing was stopped when total soluble solid content (TSSC) reached 60-65°Brix.

Color parameters were determined using a tristimulus colorimeter (Minolta Chroma Meter CR300, Japan). The L0, A0 and B0 were measured from fresh samples, and L, a and b refer to color values at various times during concentration process. Zero-order (equation 1) and first-order (equation 2) kinetic models have been used to evaluate the color degradation kinetics of the prepared orange jams (Maskan. 2006):

Texture profile analysis (TPA) test was carried out using a spreadability test that generates a plot of force (in Newton) versus time (in second) using a texture Analyzer, TA.XT. Plus (Stable Microsystems, UK) according to (Basu and Shivhare, 2010). A set of precisely matched male and female perspex 90_ cones was used for analysis. The textural data were analyzed by the instrument software (TEE 32) and parameters (hardness and work of shear), were recorded. The tests were performed in triplicate and presented as

Analysis of variance (ANOVA), with a confidence level of 95% (p<0.05), using SAS Software version 1997and Duncan’s New Multiple Range Test was applied to evaluate the differences between mean values among the different treatments.

According to the Codex Alimentarius (Standard 79, 1981), normal fruit conserves or preserves must contain at least 45% fruit and TSSC should be between 60% and 65% or greater. The mean evaporation times required to obtain a final jam with 60°-65°Brix for different initial sugar concentrations are presented in Table 1. Results showed that using MW reduced significantly jam processing time (p<0.05). This is due to rapid heating and, evaporating water effect of microwave process (Igual et al. 2010). Infact, MW interacts directly with the polar water molecules to generate heat. Evaporation occurring inside the product, creates a part increasing the internal pressure and concentration gradients, thus we obtain more effective water diffusion (Summu. 2005) MW uses also higher quality (and more expensive) electrical energy converted into MW radiation by magnetrons rather than the thermal energy (Zhang et al. 2006) . Water activity, pH, °Brix, and acidity of the formulated jams are shown in the Table 1. Jams produced by MW process exhibited significantly lower pH and acidity values than the CH processed jam samples. The contribution of microwaves to increase pectin solubilization could contribute to this pH decrease (Contreras et al.2008). Low pH and acidity contribute to high stability of the formulated jams (Besbes et al. 2009). No significant difference (p> 0.05) was shown between the water activity of orange jams produced by the CH and MW processes but a correlation between water activity and concentration in “Brix can be observed. Infact, we note a decrease of the water activity with increasing of the initial concentration of sugar. Progressive increase in sugar concentration partially reduces the water available in pectin–sugar–acid mix and thus reduces the chance of formation of hydrogen bonds and other possible association of water with polymeric pectin chain (Basu and Shivhare. 2010).

To minimize the variability between different raw samples (before concentration processes), color changes were assessed using L’( L/L0), A’(a/A0) and B’(b/B0) ( Fig.1 ). The L’ and B’ parameters decreased in both CH and MW treatments for the three sugar concentrations (30%, 40%, and 50%) jam products. Hence, samples, after evaporation process, were darker and less yellow. A’ values increased right at the beginning of the concentration treatment, meaning that the samples were redder. For both treatments, when compared with raw samples, the concentration process led to great color differences. Many reactions can take place during thermal processing that affect product color: pigment degradation, especially carotenoids anthocyanin and chlorophyll, browning reactions such as the Maillard reaction, enzymatic browning and oxidation of ascorbic acid (Fratiani et al. 2010).

The L’, A’, and B’ parameters tended to change faster during MW process compared to CH process. For 30% initial sugar concentration, an L’-value of about 0.80 was reached after 20 min for MW and about 80 min for CH (Fig. 1a). Therefore, MW at power 700 W would give a color degradation rate 2 times faster. However, no significant differences (P > 0.05) were detected between both processes in terms of final L’, A’, and B’. Hence, 700W MW application preserves the same color parameters than CH in a shorter time. Experimental color parameters data L’, A’ and B’ were fitted to different kinetic models (equations 1 and 2). Regardless of the processing method, both zero- and first-order reaction kinetic models can be used adequately to predict L’, A’, and B’ values (correlation coefficients (R2) varied from 0.89 to 0.99). In all cases, the zero-order model kinetic constants k0 ranging from 0.001 to 0.144 was higher than those of the first-order model k1 (from 0.001 to 0.079). The rate of variation in A’ value (sharp increase, Fig. 2b) and in B’ value (sharp decrease, Fig. 2c) using MW was very fast during the first 20 min of the process. This is probably due to the high temperatures generated by MW inside the samples.

3.3. Textural properties of formulated jams Figure 2 shows the texture profile analysis of the jam formulations in terms of hardness and work of shear. Hardness (g force) is defined as the maximum force on a product that displays substantial resistance to deformation. Work of shear (g.s) is the total amount of force required to carry out the shearing process and it is a measure of ease of spreadability (Basu and Shivhare 2010) CH processed jam samples showed higher consistency (higher work of shear and hardness) than MW processed jam samples. This may be correlated to the lower pH and higher acidity values of CH processed jam samples (Table 1). Infact, the number of H+ ions which replace the methyl groups from pectin structure increased with acidity, which results in the reduction of inter-chain repulsion and an easy binding of pectin with sugar, causing a denser network formation and an increasing of the hardness of CH jam samples (Basu et al. 2011). For samples produced by CH process, work of shear and hardness increased progressively with the initial concentration of sugar. In jam, pectin binds to water by making a fibrous network. The addition of sugar causes the destabilization of the water-pectin system. Infact, additional hydroxyl groups from sucrose provide further hydrogen bonding with the free water in the network junctions (Basu et al. 2010) and hence increase the hardness of jam. However, this behavior took place up to a certain level of sugar concentration when applying MW energy. Infact, hardness initially increased with sugar concentration up to 40% sugar but decreased with further increase in the sugar concentration (50% sugar). Most likely, as the amount of sugar increased above 40%, the junction zones between water and pectin become weak which results in less rigid pectin network and the release of water in high sucrose containing MW jams (Basu et al. 2013).

In this work, MW and CH were applied in the concentration step of orange jam making. The resulted jams were compared in terms of colour degradation kinetics and final textural profile. The application of MW increases the rate of colour degradation. Whereas, MW allows obtaining orange jams with similar total soluble solid content and similar color than CH in a shorter processing time. According to the texture results, MW energy provides a softer jam than CH process. It could therefore concluded that MW energy can be introduced successfully as an alternative method in the concentration process of orange jam, which can be of great interest in industry.