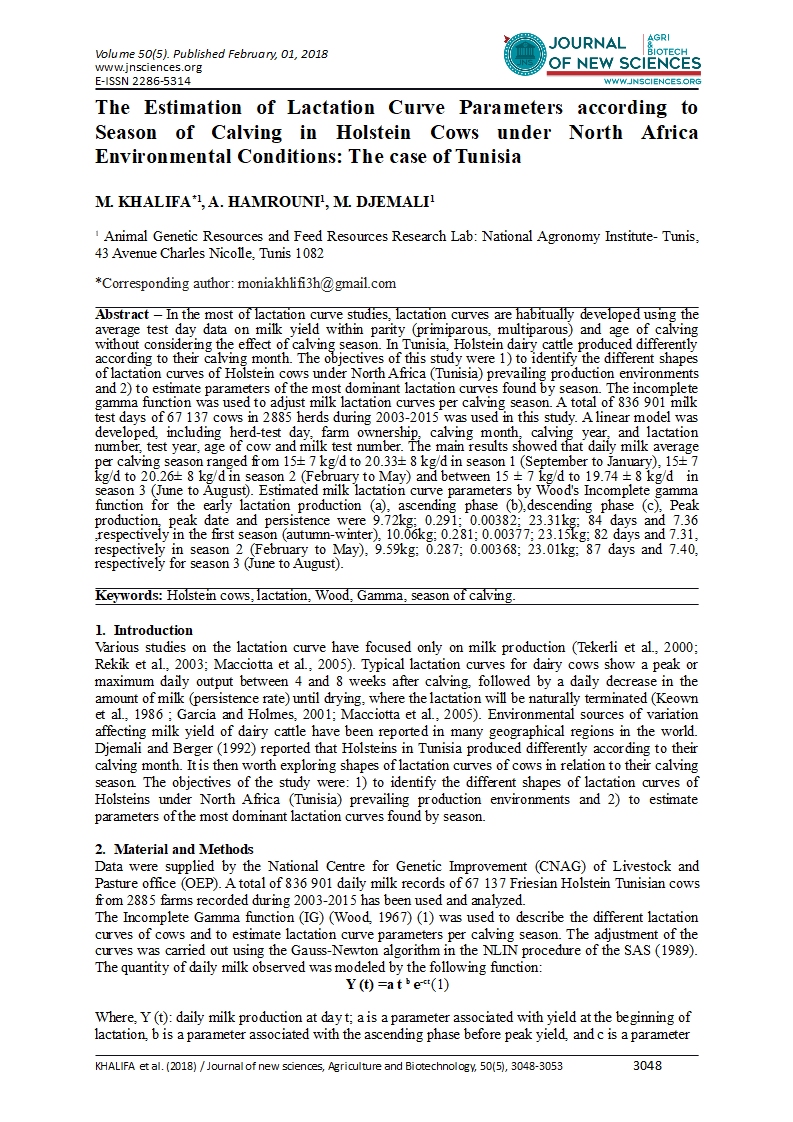 Abstract – In the most of lactation curve studies, lactation curves are habitually developed using the average test day data on milk yield within parity (primiparous, multiparous) and age of calving without considering the effect of calving season. In Tunisia, Holstein dairy cattle produced differently according to their calving month. The objectives of this study were 1) to identify the different shapes of lactation curves of Holstein cows under North Africa (Tunisia) prevailing production environments and 2) to estimate parameters of the most dominant lactation curves found by season. The incomplete gamma function was used to adjust milk lactation curves per calving season. A total of 836 901 milk test days of 67 137 cows in 2885 herds during 2003-2015 was used in this study. A linear model was developed, including herd-test day, farm ownership, calving month, calving year, and lactation number, test year, age of cow and milk test number. The main results showed that daily milk average per calving season ranged from 15± 7 kg/d to 20.33± 8 kg/d in season 1 (September to January), 15± 7 kg/d to 20.26± 8 kg/d in season 2 (February to May) and between 15 ± 7 kg/d to 19.74 ± 8 kg/d in season 3 (June to August). Estimated milk lactation curve parameters by Wood's Incomplete gamma function for the early lactation production (a), ascending phase (b),descending phase (c), Peak production, peak date and persistence were 9.72kg; 0.291; 0.00382; 23.31kg; 84 days and 7.36 ,respectively in the first season (autumn-winter), 10.06kg; 0.281; 0.00377; 23.15kg; 82 days and 7.31, respectively in season 2 (February to May), 9.59kg; 0.287; 0.00368; 23.01kg; 87 days and 7.40, respectively for season 3 (June to August).

Various studies on the lactation curve have focused only on milk production (Tekerli et al., 2000; Rekik et al., 2003; Macciotta et al., 2005). Typical lactation curves for dairy cows show a peak or maximum daily output between 4 and 8 weeks after calving, followed by a daily decrease in the amount of milk (persistence rate) until drying, where the lactation will be naturally terminated (Keown et al., 1986 ; García and Holmes, 2001; Macciotta et al., 2005). Environmental sources of variation affecting milk yield of dairy cattle have been reported in many geographical regions in the world. Djemali and Berger (1992) reported that Holsteins in Tunisia produced differently according to their calving month. It is then worth exploring shapes of lactation curves of cows in relation to their calving season. The objectives of the study were: 1) to identify the different shapes of lactation curves of Holsteins under North Africa (Tunisia) prevailing production environments and 2) to estimate parameters of the most dominant lactation curves found by season.

Data were supplied by the National Centre for Genetic Improvement (CNAG) of Livestock and Pasture office (OEP). A total of 836 901 daily milk records of 67 137 Friesian Holstein Tunisian cows from 2885 farms recorded during 2003-2015 has been used and analyzed.

The Incomplete Gamma function (IG) (Wood, 1967) (1) was used to describe the different lactation curves of cows and to estimate lactation curve parameters per calving season. The adjustment of the curves was carried out using the Gauss-Newton algorithm in the NLIN procedure of the SAS (1989). The quantity of daily milk observed was modeled by the following function:

It is worth mentioning (Table 1) that Wood's model can adjust curve parameters into four different forms (Wood, 1976; Rekik and Ben Gara, 2004; Macciotta et al., 2005; Gołębiewski et al., 2011), mainly in the function of the value of parameters (b) and (c), because (a) is always positive and influences the average level of production. A lactation curve is considered atypical if (b) or (c) is negative (Type A4). For example, a form of lactation curve in the Table1 does not show an increase in the first phase (Type A3). Another curve shows an increasing production of the first phase (Type A2). Type A1 represents the typical form (b> 0 and c> 0). In this study, we only look at curves that have the typical shape (Type A1).

Typical lactation curves have positive b and c, and curves with negative b or c correspond to atypical lactations (Tekerli et al., 2000)(Table1).The lactation curves examined in this study revealed atypical curves (with negative parameter b or c) with a percentage of 25.10%. The occurrence of atypical forms, characterized by the absence of a lactation peak, accounts for 15-42% (Tekerli et al., 2000; Atashi et al., 2009; Boujenane and Hilal, 2012; Jeretina et al., 2013; Chegini et al., 2015). However, Shanks et al. (1981) were the only ones who found a small proportion equivalent to 0.73% (840 atypical lactations of 113 705 lactations).This form of curves corresponds to cows with problems due to incorrect data, lack of information or management problems. Rekik and Ben Gara (2004) reported that the appearance of atypical curves is mainly due to frequent changes in the quantity and quality of the ration, as well as physiological and health problems related to difficult environmental conditions.

3.2. Lactation curves traits according to season of calving

The value of initial production reported by parameter (a) of the lactation curves is higher in cattle calving in spring (10.06 kg) followed by fall-early winter and summer (9.72kg and 9.59kg, respectively) (Table3). This can be explained by the difference between feeding levels depending on the seasons, as in winter, the grass is abundant and its digestibility is maximum. The animal consumes large quantities and this high level of feeding allows it to produce high production of milk. On the other hand, in summer the grass is less abundant and it is generally of less nutritive value which results in a decrease in production as it has been reported by Bouallegue et al. (2013) that the favorable calving season for dairy production is winter followed by spring. However, parameter (b), which is the growth rate associated with the upward phase of average milk curves of winter-calving cattle is low (0.291) compared those of spring-calving cattle (0.281) and summer-calving cattle (0.287). We conclude that autumn and winter calving is the most favorable periods for a better ascending phase. The calving season also affects parameter (c), where the decay rate associated with the downward phase of the average milk curves was high in autumn-early winter (0.00382) and low in summer (0.00368).

The seasonal effect acts upon the characteristics of the lactation curve. Indeed, the highest peak was obtained in cows that calved in autumn-early winter. Tekerli et al. (2000) and Bouallegue et al. (2013) found similar results. Cows calving in summer have low production at peak. Similar results have been reported by Rekik et al. (2004), who argue that cows calving in summer have small amounts of milk at peak lactation. This is due to the Tunisian summer conditions which are characterized by very limited forage availability and a high heat stress. Cows calving in spring reach their peak sooner. Similar results have been reported by Tekerli et al. (2000) and Rekik et al. (2003). Persistency lactation was the higher in cows that had calved in autumn-early winter and those who calved in the summer. But the lowest value was observed in cows calving in spring. These results show that cows that calve in summer and fall-early winter are more persistent.

The relationship between the calving season and the parameters of the lactation curve can be explained by the temperature on the one hand and by the rainfall variations on the other hand, which affect forage production, especially in summer when food resources are reduced and the effect of thermal stress is aggravated. Indeed, Bouraoui et al. (2002) reported that summer heat stress minimizes the amount of milk and affects the physiological functions of Holstein cows.

Three lactation curves were identified based on the main calving seasons of Holstein cows in Tunisia (Djemali et Berger, 1992). Lactation curves fitted for milk yield per season of calving was presented in Figure 1. The shapes of the lactation curves of three seasons are similar. They have practically assumed the typical form where the daily yield of milk has increased from calving to a peak in which the production reaches its maximum. It persists for a certain time on this level, and then it gradually decreases towards the end of the lactation. Analysis of these curves shows that cows calving in autumn-early winter (September-January), spring (February-May) and summer (June-August) started their lactation with the same level of production. This aspect is probably explained by the body condition of the animal at calving and by the feeding level of the cow as well as the seasonal effect. Indeed, the lowest peak was recorded in cows calving in summer as food resources are reduced and heat stress is high. These results were confirmed by many works in Tunisia (Bouraoui et al., 2002; Rekik et al., 2003; Rekik and Ben Gara, 2004; Bouallegue et al., 1984) and in the world (Ray et al., 1992; Lee et al., 2000; Tekerli et al., 2000). These authors report that daily milk production is disrupted for summer calving. Persistency of lactation was high in cows that had calved in autumn-early winter, and those who calved in the summer, became more persistent around 165DIM (Figure 1). On the other hand, autumn-early winter calving showed the higher peak yield with a slow decay rate and persistency until late lactation. This is the favorable season for dairy production.

The direct modeling of test-day (TD) yield was reliable in generating lactation curve estimates for milk. The Wood model showed a satisfactory fit to the data. The calving season is an important factor of the variation of the shape of lactation curves. The dairy cow produces differently during the calving period. The highest peak and persistency were observed in cows that calved in fall and winter followed by spring and summer. Cows which calved in summer presented the lowest peak.

The National Centre for Genetic Improvement of Tunisia (CNAG: Sidi Thabet, Tunis) is greatly acknowledged for providing the data used in this study.