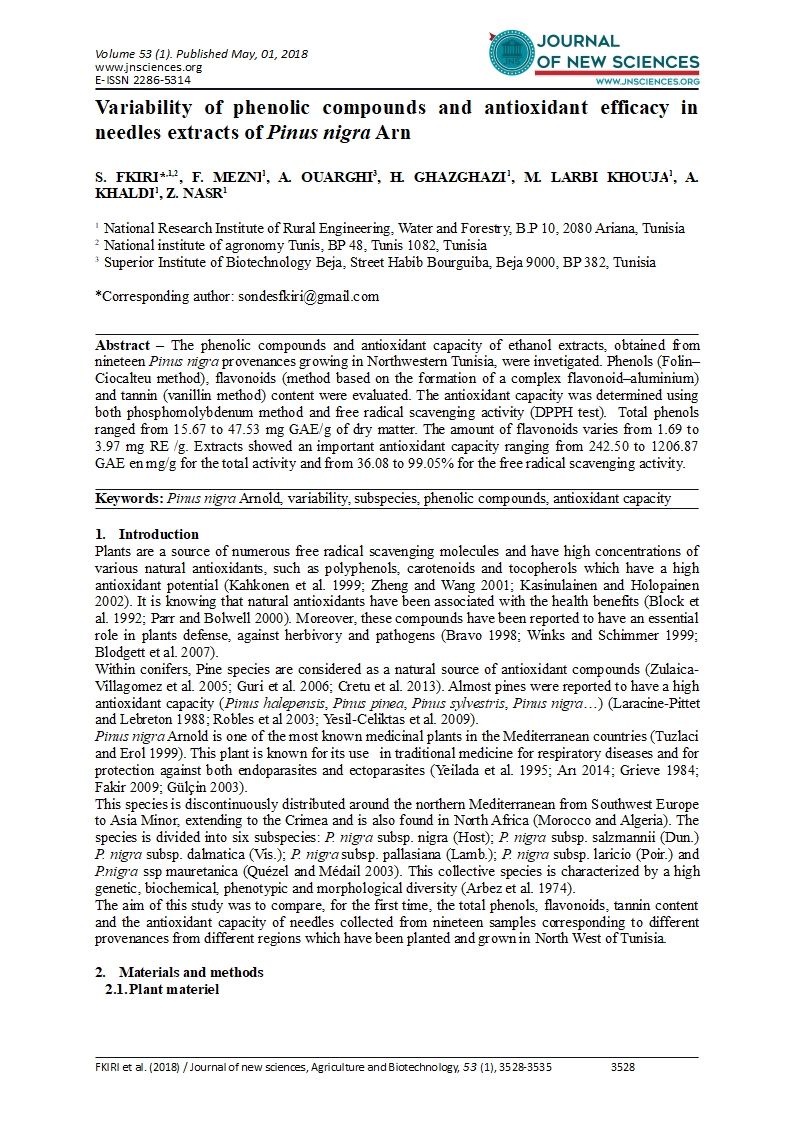 Abstract – The phenolic compounds and antioxidant capacity of ethanol extracts, obtained from nineteen Pinus nigra provenances growing in Northwestern Tunisia, were invetigated. Phenols (Folin–Ciocalteu method), flavonoids (method based on the formation of a complex flavonoid–aluminium) and tannin (vanillin method) content were evaluated. The antioxidant capacity was determined using both phosphomolybdenum method and free radical scavenging activity (DPPH test). Total phenols ranged from 15.67 to 47.53 mg GAE/g of dry matter. The amount of flavonoids varies from 1.69 to 3.97 mg RE /g. Extracts showed an important antioxidant capacity ranging from 242.50 to 1206.87 GAE en mg/g for the total activity and from 36.08 to 99.05% for the free radical scavenging activity.

Plants are a source of numerous free radical scavenging molecules and have high concentrations of various natural antioxidants, such as polyphenols, carotenoids and tocopherols which have a high antioxidant potential (Kahkonen et al. 1999; Zheng and Wang 2001; Kasinulainen and Holopainen 2002). It is knowing that natural antioxidants have been associated with the health benefits (Block et al. 1992; Parr and Bolwell 2000). Moreover, these compounds have been reported to have an essential role in plants defense, against herbivory and pathogens (Bravo 1998; Winks and Schimmer 1999; Blodgett et al. 2007).

Pinus nigra Arnold is one of the most known medicinal plants in the Mediterranean countries (Tuzlaci and Erol 1999). This plant is known for its use in traditional medicine for respiratory diseases and for protection against both endoparasites and ectoparasites (Yeilada et al. 1995; Arı 2014; Grieve 1984; Fakir 2009; Gülçin 2003).

The aim of this study was to compare, for the first time, the total phenols, flavonoids, tannin content and the antioxidant capacity of needles collected from nineteen samples corresponding to different provenances from different regions which have been planted and grown in North West of Tunisia.

Needles of nineteen samples of Pinus nigra were collected in April 2015 from Souiniet arboretum in West-Northern Tunisia (8°48'E, 35°54'N, 492m). The nineteen samples correspond to different provenances from different regions which have been planted and grown in North West of Tunisia (Table 1) according to a comparative plantation assay since 1966.

Needles of Pinus nigra were dried and then ground into a powder. 20 g of needle powder were mixed with 200 ml of solvent ethanol for 24 hours with continuous shaking. The filtrated plant extracts were dried to evaporation of all solvent. The residues were suspended in ethanol and used for the experiments. Needles extracts were conserved in obscurity at 4°C.

Extraction yield was expressed as the percentage (%) of grams of extract per gram of dry needles.

The total phenolic content of the extract was determined by the Folin–Ciocalteu method (Singleton and Rossi, 1965). 0.5 ml of needle extracts were mixed with 2.5 mL of Folin–Ciocalteu reagent (1:10) for 3 min, followed by the addition of 2 mL of sodium carbonate (7.5%). The mixture was allowed to stand for a further 30 min in the dark, and absorbance was measured at 765 nm. The total phenolic content was calculated from the calibration curve using 0, 0.03, 0.06, 0.12, 0.25 and 0.5 g/L solutions of gallic acid in water, and the results were expressed as mg of gallic acid equivalent per g dry weight (mg GAE/g).

The total flavonoid content of crude extract was determined by the aluminium chloride colorimetric method (Quettier Deleu et al. 2000). 1 ml of diluted sample was mixed with 1 ml of 2% aluminum chloride methanolic solution. The mixture was allowed to stand for 15 min, and absorbance was measured at 430 nm.

The total flavonoid content was calculated from a calibration curve, and the result was expressed as mg rutin equivalent per g dry weight (mg RE/g Ext).

The method described by Broadhurst and Jones (1978) was used to determine the total condensed tannin content in needle extracts. 0.5 ml of the extract was mixed with 3 ml of vanillin (4% in methanol) and 1.5 ml of Hydrochloric acid. After incubation for 15 min at 20◦C in the dark, the absorbance was read at 500 nm. The condensed tannin content was calculated from a calibration curve prepared with a solution of catechin (30 ppm). The results were expressed in mg of catechin equivalent per g of dry weight of needles (mg CE/g).

The total antioxidant activity was evaluated according to the method described by Prieto et al. (1999). 0.5 mL of extracts was combined with 4.5 mL of reagent solution (0.6 M sulfuric acid, 28 mM sodium phosphate, and 4 mM ammonium molybdate). 0.5 mL of ethanol was used in case of blank. The tubes were placed in a boiling water bath at 95°C for 90 min. The samples were than cooled, and the absorbance was measured at 695 nm against blank. The antioxidant activity was expressed as equivalents of Gallic Acid (mg/g of dry matter).

5 μl of the extracts was mixed with 5 ml of DPPH solution (0.004%, in ethanol). The reaction mixture was incubated for 30 min at room temperature and the absorbance was read at 517 nm against a blank (Brand-Williams et al. 1995).

The radical scavenging activity was calculated using the following formula:

The statistical analysis were done with the GLM procedure (General Linear Models) of the SAS (9.0) program. Correlations were performed by SPSS.20 program. Principal component analysis was evaluated with R (version 3.1.1) program.

Yields of extracts from needles of P. nigra are shown in table 2. Highest yield was reached by needles of Broug samples (31.29%). Bfr, Ala and Olet samples exhibited the lowest yield with 5.3%, 5.66% and 5.58%, respectively.

Statistical analysis showed that samples from nigra subspecies presented the most important yields while samples from pallasiana subsp. showed the lowest values.

The highest values was reached by needles of Marg sample and the lowest by Pug, Crim, Tent and Caz samples with respective values of 20.7,18.84, 17.08 and 15.67 mg GAE/g of dry matter. It has been demonstrated that total phenol content was higher in lariciosubsp. than the other subspecies.

The amount of flavonoids varies from 1.69 to 3.97 mg RE/g. The highest values were found in needles of Guil and Aspr samples (3.97 and 3.76 mg RE/g respectively). Needles of Bfr sample showed the lowest flavonoids content with 1.69 mg RE/g. Samples of salzmanni subsp. exhibited the most important flavonoids content.

Using the free radical scavenging method, the highest percentage of inhibition was reached by needles of Kus and Marg samples (99.05 and 93.26%, respectively). Such as total antioxidant activity, Caz sample showed the less important free scavenging activity (36.08%).

There was a significant linear correlation between the antioxidant activity and total phenols, flavonoids and tannins contents in the case of salazmani, pallasiana and nigra subspecies. However, no significant relationship between antioxidant activity and total phenol, flavonoids and tannins was recorded for laricio subspecies.

The results of principal component analysis showed that total phenol content, total antioxidant activity and radical scavenging activity were the most significant variables for classification of the P. nigra extracts. These parameters were considerably loaded into the two major principal components (Dim1 and Dim 2) explaining more than 66% of the variance.

According to the analysis, three different groups were revealed (Figure 1). The first group contained Marg, Aspr and Barr2 samples which had the main concentrations of phenols and the strongest antioxidant activity. The second group contained only Caz sample which showed the lowest amount of phenols and the lowest antioxidant activity. The third group regrouped all the other samples studied.

The amounts of total phenols in the Pinus nigra needles obtained in this study are more important than those found in other species of the same genus such as Pinus halepensis (25 mg GAE/g) (Laracine-Pittet and Lebreton, 1988), Pinus pinaster (17 mg GAE/g) (Alonso et al. 2002), Pinus roxburghii (10 mg GAE/g) and Pinus wallichiana (5 mg GAE/g) (Maimoona et al. 2011). Results showed that total phenol content was higher in laricio subsp. which is in accordance with levels reported in the literature (Cannac et al. 2007). Levels of total flavonoids were of the same importance as those found in other species, such as Pinus halepensis (Laracine-Pittet and Lebreton 1988) and Pinus sylvestris Robles et al (2003). In addition, needles of P. nigra showed a high amount of tannins when compared with P. pinaster needles (Alonso et al. 2002).

The analyses of variance showed that rates of total phenols, flavonoid and tannin contents varied considerably between the nineteen samples studied. In the literature, several factors were reported to explain the variability of these compounds. Numerous studies demonstrated that this diversity is related to the bioclimatic conditions especially rainfall, soil and temperature (Bhavana et al., 2013; Bencsik et al., 2011). Other authors explain it by a genetic variability.

In our case, significant difference found among provenances seem to support the hypothesis of high genetic variability of black pine. The divergence between the nineteen P. nigra samples, from different origins and growing under same bioclimatic and substrates conditions cannot result from local environmental factors. Arbez et al. (1974) highlighted a high degree of genotypic variability observed in P. nigra subspecies that was reflected in the biochemical variability of this plant (Fratianni et al. 2007).

Moreover, Boscaiu et al. (Boscaiu et al. 2010) showed that there is a positive correlation between the stress caused by environmental factors and the rate of phenolic compounds accumulated in the plants, signifying that these compounds appear to be good markers of stress in a lot of species. According to these results, we can suggest that samples of P. nigra which showed the highest amount of phenols and flavonoids were the less adapted to the bioclimatic conditions of the growing site and vice versa.

The antioxidant capacity of Pinus nigra needles is more important than that found in other species such as P. roxburghii, P. wallchiana and P. gerardiana (Sharma et al. 2016). Many studies have revealed that there is an important relationship between antioxidant activity and phenolic and flavonoids compounds in plants (Cai et al. 2004; Shyi-Neng et al. 2014; Sharma et al. 2016). Needles of P. nigra showed a high amount of phenols and flavonoids. This can explain its important antioxidant capacity. On the other hand, antioxidant activity exhibited a high variability among the samples studied. This may be explained by the variability observed in antioxidant compounds, especially that a considerable correlation was revealed between the total phenols and the antioxidant capacity in the samples. Needles of Pinus nigra could be used as a source of natural antioxidants which is known by their positive effects on human health, due to their antioxidant properties, in particular protection from coronary heart disease and cancer (Catherine et al. 1997; Serafini et al. 1998; Knekt et al. 1996; Thomas 2000). It could be also used as a possible food supplement (Zupko et al. 2001) or in cosmetical and pharmaceutical industry (Lupo 2001).

This study showed the great presence of antioxidant compounds and confirmed high level of antioxidant activities in Pinus nigra needles. Significant differences were revealed between subspecies and provenances. Based on the results of our study, P. nigra needlesare a potent source of natural antioxidants applied in pharmaceutical and food industries. To highlight the properties of this plant, additional investigations concerning more biological activities require to be conducted.

Block G, Patterson B, Subar A (1992). Fruit, vegetables, and cancer prevention: a review of the epidemiological evidence. Nutr Cancer 18: 1–29.

Parr AJ, Bolwell GP (2000). Phenols in the plant and in man the potential for possible nutritional enhancement of the diet by modifying the phenols content or profile. J Sci Food Agric 80: 985–1012.