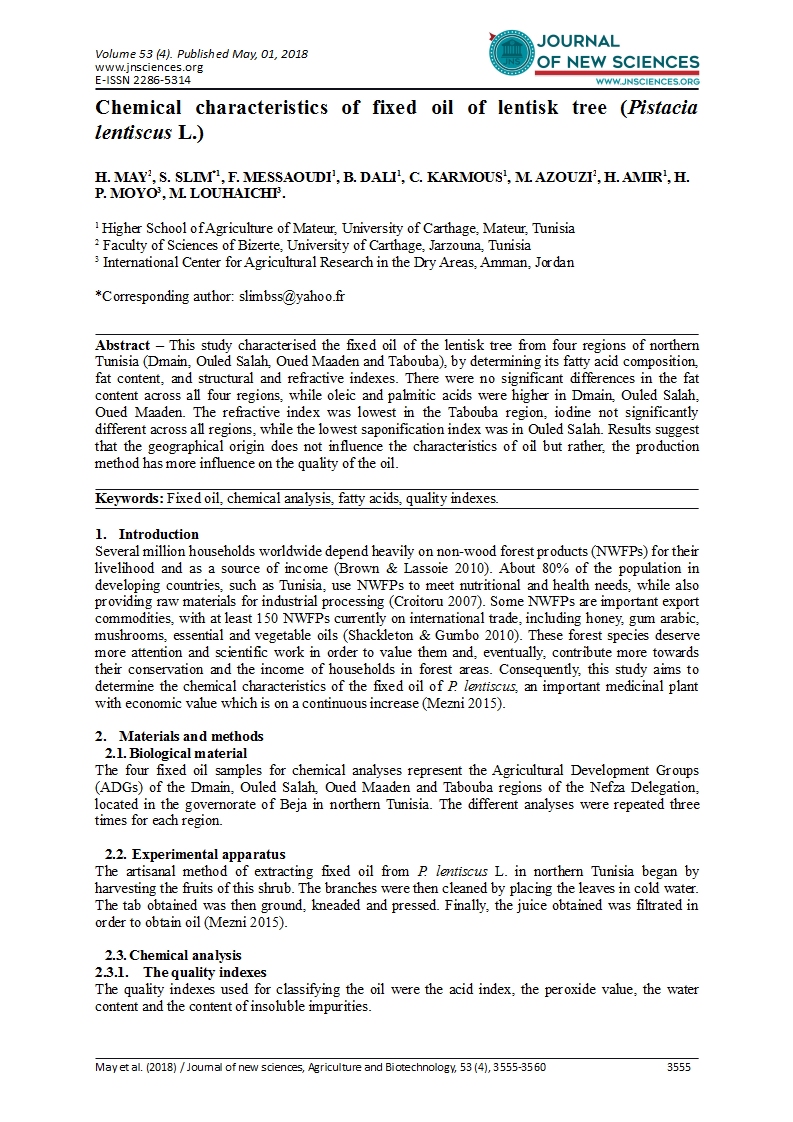 2 Faculty of Sciences of Bizerte, University of Carthage, Jarzouna, Tunisia

Abstract – This study characterised the fixed oil of the lentisk tree from four regions of northern Tunisia (Dmain, Ouled Salah, Oued Maaden and Tabouba), by determining its fatty acid composition, fat content, and structural and refractive indexes. There were no significant differences in the fat content across all four regions, while oleic and palmitic acids were higher in Dmain, Ouled Salah, Oued Maaden. The refractive index was lowest in the Tabouba region, iodine not significantly different across all regions, while the lowest saponification index was in Ouled Salah. Results suggest that the geographical origin does not influence the characteristics of oil but rather, the production method has more influence on the quality of the oil.

Several million households worldwide depend heavily on non-wood forest products (NWFPs) for their livelihood and as a source of income (Brown & Lassoie 2010). About 80% of the population in developing countries, such as Tunisia, use NWFPs to meet nutritional and health needs, while also providing raw materials for industrial processing (Croitoru 2007). Some NWFPs are important export commodities, with at least 150 NWFPs currently on international trade, including honey, gum arabic, mushrooms, essential and vegetable oils (Shackleton & Gumbo 2010). These forest species deserve more attention and scientific work in order to value them and, eventually, contribute more towards their conservation and the income of households in forest areas. Consequently, this study aims to determine the chemical characteristics of the fixed oil of P. lentiscus, an important medicinal plant with economic value which is on a continuous increase (Mezni 2015).

The four fixed oil samples for chemical analyses represent the Agricultural Development Groups (ADGs) of the Dmain, Ouled Salah, Oued Maaden and Tabouba regions of the Nefza Delegation, located in the governorate of Beja in northern Tunisia. The different analyses were repeated three times for each region.

The artisanal method of extracting fixed oil from P. lentiscus L. in northern Tunisia began by harvesting the fruits of this shrub. The branches were then cleaned by placing the leaves in cold water. The tab obtained was then ground, kneaded and pressed. Finally, the juice obtained was filtrated in order to obtain oil (Mezni 2015).

The quality indexes used for classifying the oil were the acid index, the peroxide value, the water content and the content of insoluble impurities.

The acid index was then calculated by applying the following formula:

* The analysis of the peroxide value was determined according to ISO 3960 (2001). The calculation of this index was made based on the following formula:

V: volume of the sodium thiosulfate solution used for the determination (ml)

m: mass of the test portion.

The content of water and volatiles (W) expressed as a percentage of mass were given by the following relation:

M1: mass of the capsule and the test portion before heating (g)

M2: mass of the capsule and the test portion after heating (g)

The structural indexes represent the saponification index and the iodine value.

V0: volume of the standard HCl solution for the blank test (ml)

V1: volume of the HCl standard solution for the determination

* The analysis of the iodine value was determined according to ISO 3961 (1987). The value of this index (Wi) was calculated as follows:

C: the concentration of the sodium thiosulfate solution (mol / l)

V1: volume of the sodium thiosulfate solution used for the blank test (ml)

V2: volume of the sodium thiosulfate solution for determination (ml)

P2: Mass of the tare containing the test portion (g)

The determination of the fatty acids was carried out using a gas chromatograph (GC). The fatty acid analysis was determined according to ISO 5509 (2000).

The refractive index analysis was determined using a refractometer according to ISO 6320 (2000).

The acid index obtained in this study varied from 7.55 to 58.86, with the highest (p<0.05) in the Tabouba region. The peroxide index ranged from 6.43 to 27.04, with the lowest recorded in the Ouled Salem region (Fig. S1 A & B). Analysis of the water content shows no significant differences (p>0.05) observed in all regions (Fig. S1C), while the Tabouba region recorded the highest insoluble impurities (3.652%) (Fig. S1D). It can be suggested that there is no correlation between the extraction method, the impurity level and the geographical origins of three of the production areas in the current study (Dmain, Ouled Salem and Oued Maaden). However, the high content of impurities in oil from the Tabouba region supports our hypothesis of some problems in the production method in this region. This can be explained by some similarities, in one way or another, between extraction methods that are all artisanal, applying a high spin and causing a lot of impurities.

The iodine values ranged from 5.81 to 15.33 g/100g of oil, with no significant differences obtained across the regions, while the saponification index was between 126.76 and 191.87 g/100g of oil (Fig S2 A & B). The Ouled Salem region recorded the lowest structural indexes (Fig. S2B). Neither the geographical location nor the extraction process had any influence on the iodine value of the oils. The saponification index of an oil varied according to its geographical origin (region of provenance), and also according to the process used during its extraction.

The fat content in the oil was not significantly different across all four regions (range 92.10- 100%; Fig. S3), implying that it is not dependent on the geographical origin of the oils, but possibly dependent on the species. The richness of the fixed oil of P. lentiscus, in unsaturated fatty acids, indicates a significant nutritional value of the oil. According to the content of each fatty acid in the most consumed vegetable oils, the fixed oil of lentisk meets the criteria of high quality oil, as it has a composition similar to that of cotton seed oil and rice bran oil.

Oleic, palmitic and palmitoleic acids were higher in the Dmain, Ouled Salah, Oued Maaden compared to the Tobouba region, whereas stearic acid was highest in the Tabouba region (Table S1). Most fatty acids present in fixed oils of P. lentiscus are affected by the origin (region) and by the individual plant effect within the same site. Depending on the harvest site and the individual from which the fruit was harvested, changes in the oleic and linoleic acid contents observed in all oil samples are probably related to genetic and landscape factors (e.g. pedoclimatic and topography).

The acid and peroxide indexes were highest in the Tabouba region, with no significant differences in all regions for the iodine value, fat content and the water content. The main unsaturated fatty acids contained in the fixed lentisk oils were oleic, linoleic and palmitoleic acids, representing more than 70% of the total acid composition. The richness of the fixed oil of P. lentiscus in unsaturated fatty acids demonstrates a high nutritional value. The different characterisation parameters of P. lentiscus oils have asserted that the geographical origin does not influence the characteristics of oil but rather, the production method with respect to the quality standards during the production process are the guarantors of the quality of the oil. This is confirmed in some indices for the oil from the Tabouba region, which have detected some failures in the production process.

Brown, HP and Lassoie, JP. 2010. The interaction between market forces and management systems: a case study of non-wood forest products in the humid forest zone of Cameroon. Inter. Fore. Rev. 12(1): 13-26.