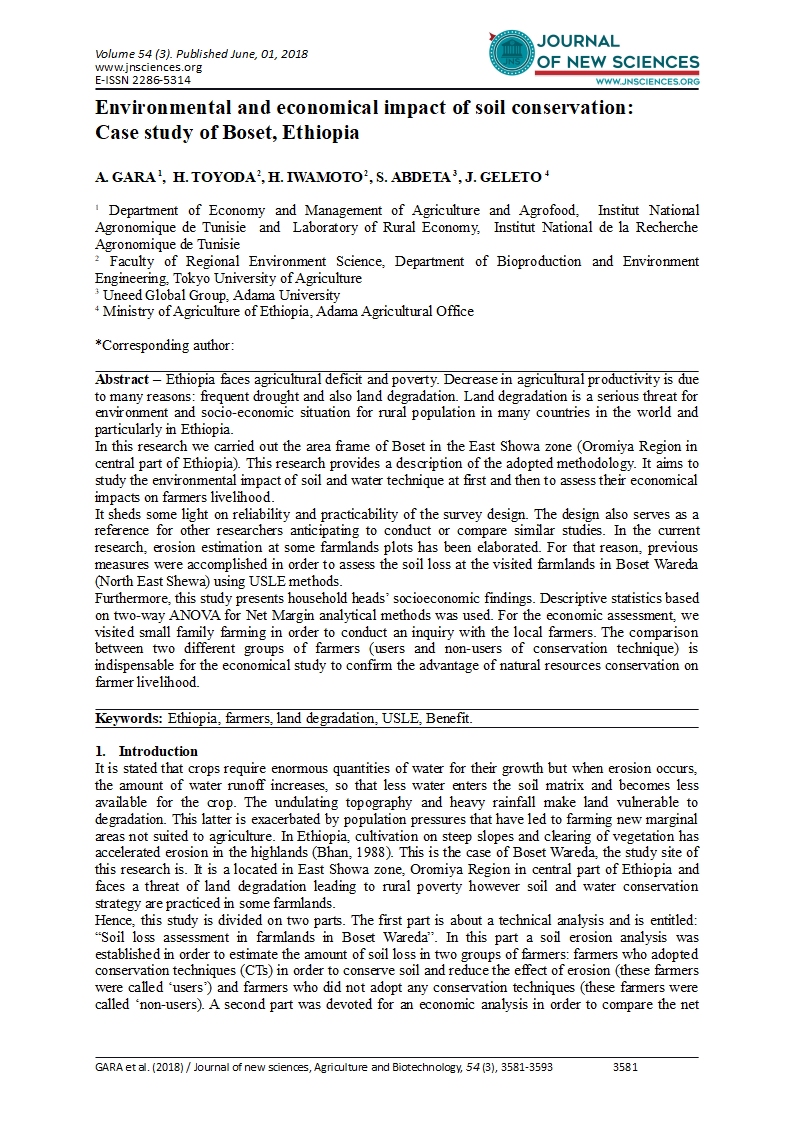 Abstract – Ethiopia faces agricultural deficit and poverty. Decrease in agricultural productivity is due to many reasons: frequent drought and also land degradation. Land degradation is a serious threat for environment and socio-economic situation for rural population in many countries in the world and particularly in Ethiopia. In this research we carried out the area frame of Boset in the East Showa zone (Oromiya Region in central part of Ethiopia). This research provides a description of the adopted methodology. It aims to study the environmental impact of soil and water technique at first and then to assess their economical impacts on farmers livelihood.  It sheds some light on reliability and practicability of the survey design. The design also serves as a reference for other researchers anticipating to conduct or compare similar studies. In the current research, erosion estimation at some farmlands plots has been elaborated. For that reason, previous measures were accomplished in order to assess the soil loss at the visited farmlands in Boset Wareda (North East Shewa) using USLE methods. Furthermore, this study presents household heads’ socioeconomic findings. Descriptive statistics based on two-way ANOVA for Net Margin analytical methods was used. For the economic assessment, we visited small family farming in order to conduct an inquiry with the local farmers. The comparison between two different groups of farmers (users and non-users of conservation technique) is indispensable for the economical study to confirm the advantage of natural resources conservation on farmer livelihood.

It is stated that crops require enormous quantities of water for their growth but when erosion occurs, the amount of water runoff increases, so that less water enters the soil matrix and becomes less available for the crop. The undulating topography and heavy rainfall make land vulnerable to degradation. This latter is exacerbated by population pressures that have led to farming new marginal areas not suited to agriculture. In Ethiopia, cultivation on steep slopes and clearing of vegetation has accelerated erosion in the highlands (Bhan, 1988). This is the case of Boset Wareda, the study site of this research is. It is a located in East Showa zone, Oromiya Region in central part of Ethiopia and faces a threat of land degradation leading to rural poverty however soil and water conservation strategy are practiced in some farmlands.

Hence, this study is divided on two parts. The first part is about a technical analysis and is entitled: “Soil loss assessment in farmlands in Boset Wareda”. In this part a soil erosion analysis was established in order to estimate the amount of soil loss in two groups of farmers: farmers who adopted conservation techniques (CTs) in order to conserve soil and reduce the effect of erosion (these farmers were called ‘users’) and farmers who did not adopt any conservation techniques (these farmers were called ‘non-users). A second part was devoted for an economic analysis in order to compare the net margin between the two groups of farmers. This part is entitled “Economic assessment of farmers’ livelihood in Boset Wareda”. In both parts we followed the pecking order of: Methods, Results, followed by a general conclusion.

Boset Wareda is small area in East Shewa zone located in Oromiya region in Ethiopia. Figures 1, 2 and 3 show the location of the study site of this research.