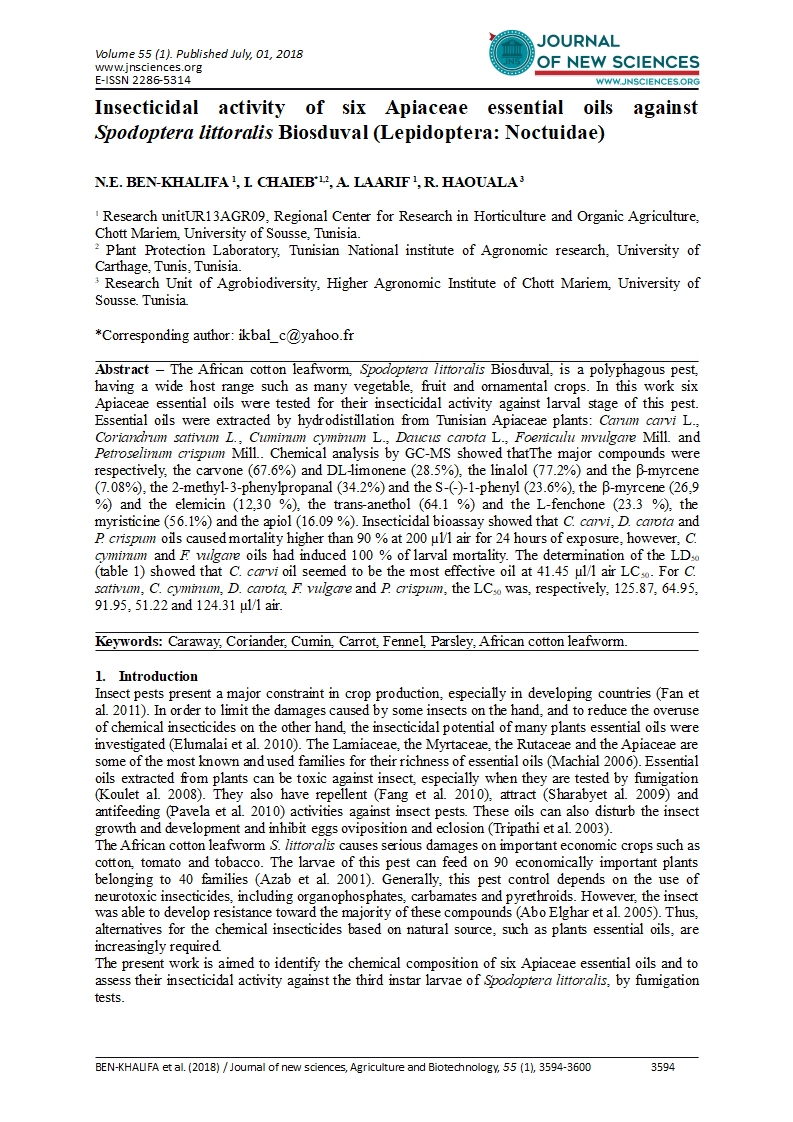 Insect pests present a major constraint in crop production, especially in developing countries (Fan et al. 2011). In order to limit the damages caused by some insects on the hand, and to reduce the overuse of chemical insecticides on the other hand, the insecticidal potential of many plants essential oils were investigated (Elumalai et al. 2010). The Lamiaceae, the Myrtaceae, the Rutaceae and the Apiaceae are some of the most known and used families for their richness of essential oils (Machial 2006). Essential oils extracted from plants can be toxic against insect, especially when they are tested by fumigation (Koulet al. 2008). They also have repellent (Fang et al. 2010), attract (Sharabyet al. 2009) and antifeeding (Pavela et al. 2010) activities against insect pests. These oils can also disturb the insect growth and development and inhibit eggs oviposition and eclosion (Tripathi et al. 2003).

The African cotton leafworm S. littoralis causes serious damages on important economic crops such as cotton, tomato and tobacco. The larvae of this pest can feed on 90 economically important plants belonging to 40 families (Azab et al. 2001). Generally, this pest control depends on the use of neurotoxic insecticides, including organophosphates, carbamates and pyrethroids. However, the insect was able to develop resistance toward the majority of these compounds (Abo Elghar et al. 2005). Thus, alternatives for the chemical insecticides based on natural source, such as plants essential oils, are increasingly required.

The present work is aimed to identify the chemical composition of six Apiaceae essential oils and to assess their insecticidal activity against the third instar larvae of Spodoptera littoralis, by fumigation tests.

The seeds of Carum carvi, Coriandrum sativum, Cuminum cyminum and Foeniculum vulgare were purchased from the same supplier, stating that the origin of these seeds was the Tunisian northwest. For Petroselinum crispum seeds, they were supplied by a farmer in the region of Chott Meriem, Sousse, Tunisia. Docus carota seeds were collected from the same region during the summer season (2012). All these seeds were kept at room temperature.

The essential oils extraction was performed by hydro-distillation using a Clevenger type apparatus. Distillation lasted between three and four hours, and the oils were kept in a refrigerator at 4°C.

2.3. Chemical analysis of the essential oils

The chemical composition of essential oils was performed by coupling Gas Chromatography with Mass Spectrometry (GC- MS). A gas chromatograph (HP 5890 Series II Plus) was coupled to a mass spectrometer (HP 5972 Series). The sample injection was in splitless mode. The column used was non-polar, type HP- 5MS, its length was 30 m, its internal diameter was 0.25 mm and the film thickness was 0.25 µm. The temperature of the injection was 250°C and the detector temperature was 280°C. The carrier gas was the helium with a flow rate of 1 ml/min and the pressure was 7.7 psi. The column temperature was programmed from 40°C to 250°C at 5°C/min. The injected volume was 1 µl after making a 0.1% dilution for all essential oils except that of C. carvi (the dilution was 2%).

The composition was indicated as a relative percentage of total peak area. Spectral analysis of the compounds is carried out by comparison with their counterparts using the spectral library Wiley 7n.l.

Spodopetera littoralis was reared under laboratory conditions (25±2°C, 60±10% RH and 16:8 h L:D photoperiod) on an artificial diet for several generations.

10 S. littoralis third instar larvae (L3) were placed into a 40 ml volumes cups. A filter paper (Whatman n°1) was fixed on the cups cover after its imbibition with the tested essential oil. For each oil, 4 doses were tested;1, 2, 4 and 8 µl, thus, the tested concentrations corresponded respectively to 25, 50, 100 and 200 µl/l air. Each treatment, in addition to the control test, was repeated 5 times.

The larval mortality was determined after 24 hours of the test completion. A larva was considered dead when it was completely immobile after excitation by a thin needle-nose plier.

Values ​​were expressed as average of five replicates. The variance analysis was done by one-way ANOVA to p <0.05. Comparisons of averages were performed by Duncan's test using version 18 of the Statistical Package for the Social Sciences program (SPSS).

Lethal Concentrations (LC50) were calculated based on the obtained results of larvicidal effect. LC50 values ​​were calculated using probit analysis as described by Finney (1971).

The chemical composition of the seeds essential oil was determined by both GC/MS techniques (Table 1). Concerning C. carvi oil, the results showed that this oil contained 11compoundspresenting 97.9 % of the total composition. The carvone and d-limonene is the major compounds, with the respective percentages of 67.6% and 28.512%. The other compounds were present at low contents. Among them, the methylbenzoate (0.59%), the anethol (0.41%) and the trans-limonene oxide (0.26%).

For C. sativum seeds essential oil, the results showed that it contained 10 compounds representing 97.8 % of the total composition (Table 1). The l-lonalol and the β-myrcene were the major compounds with respective percentages of 77.2% and 7.08%. The other compounds were present at low contents. Among them, the camphor (3.32%), the dl-limonene (3.03%) and the cis-ocimene (2.50%).

The results of insecticidal bioassay showed that the mortality increased by increasing the doses (Table 2). Mortality rates were low to moderate at 25 µl/l air concentration; they wereranged between 2% and 22%. At 50 µl/l airof C. cyminum, F. vulgare and C. carvioils, insect mortality was respectively 60 %, 78 % and 94 %. At the highest dose, all oils were able to induce a mortality rate equal or greater than 80%. For C. cyminum and F. vulgare oils, the mortality reached100 %. The determination of the LC50 values showed that the essential oils which were the most toxic against the L3 of S. littoralis were C. caraway, with a LC50 of 41.451 µl/l air, followed by F. vulgare and C. cyminum with LC50 respectively equal to 51.​220 and 64.959 µl/l air. Oils seeds of D. carota, P. crispum and C. sativum caused the less toxic effect against larvae with LC50 equal to 91.950, 124.317 and 125.875 µl/l air, respectively.

Many plant essential oil from Apiaceae Family are well known for their insecticidal activity (Ebadollahi 2013). The essential oil extracted from C. carvi seeds at a concentration of 50 µl/l air, was able to ensure a high larval mortality around to 94 %. Thus, this oil seemed to be the most toxic oil against the third instar larvae of S. littoralis. In Egypt, the Coriandrum Sativum seeds essential oils have important ovicidal activity against S.littoralis (khedr and kawas 2013). Otherwise, many studies had been conducted showing the sensitivity of this pest with various plants essential oils. Thus, the essential oil of Citrus aurantium was toxic, by fumigation, against the larvae (L3) of S. littoralis at 200 µl/l air after 24 hours of exposure, mortality was total and the LC50 was 79.95 µl/l air (Laarif et al. 2013).

Moreover, essential oils from Salvia officinalis leaves, C. sativum seeds, F. vulagre seeds, D. carota flowers and Origanum majorana leaves had caused high mortality against S. littoralis larvae (L3) by fumigation. LC50 were 23.050 µl/l air; 68.925 µl/l air; 95.075 µl/l air; 99.300 µl/l air and 100.925 µl/l air, respectively (Souguir et al.2013). The essential oils of Thuja occidentalis, Tanacetum parthenium and 8 Lamiaceae, namely, Origanum vulgare, Mentha citrata, Nepeta cataria, Salvia sclarea, Origanum compactum, Melissa officinalis, Thymus mastichina and Lavandula angustifolia are also toxic by topical application, the LD50 were less than or equal to 0.05 µl/larva (Pavela 2005). It is reported that this toxicity was due to the presence of two terpenic substances, namely, camphor and trans-acetate chrysanthenyl, knowing that camphor is the main compound found in some essential oils extracted from aromatic plants like Eucalyptus sp. Cinnamomum camphora, Rosmarinus officinalis, Arthemisia sp and C. caraway, which may cause mortality of S. littoralis larvae (L3) (Pavela et al. 2010) . The Fresh and dry aerial parts of Foeniculum vulgare showed an important insecticidal potential on Spodoptera littoralis larvae (Pavela et al 2016). Otherwise, the essential oil extracted from Tanacetum parthenium had antifeeding effect on fourth instar larvae of S. littoralis. The dose caused 50 % of anti-feedancy (DD50) was 0.25 µl/cm2. This oil was also able to stop the growth of the S. littoralisL5; and the dose caused 50 % of this effect was 0.53 µl/g (Pavela et al. 2010). Many other essential oils was shown to be active on S.littorlis larvae as Slavia officinalis (Ben Khedheret al.2017; Reguez et al. 2013, 2018), Thymus algeriensis (Belhaj-Ali et al. 2015), Artemisia absintium (Dhen et al. 2014, Chaieb et al. 2018), Eugenia caryophyllata (Dhen et al. 2013) and Citrus species (Zarrad et al. 2013, Chaieb et al. 2017). In addition, Jacobson (1990) studies showed that the carvone, one of the major compounds of C. carvi oil, incorporated at a percentage of 1 % into the diet of S. littoralislarvae, caused the decrease of the larvae average weight and blocking adults emergence. Only 2.5 % of treated larvae are transformed into chrysalis. Besides, other studies showed that the seeds essential oil of C. carvi was toxic by fumigation against the adults of Sitophilus zaemais and those of Tribolium castaneum. The CL50 were respectively 3.37 and 2.53 mg/l. This oil had also a repellent activity for Sitophilus oryzae adults (Fang et al. 2010). Moreover, C. cyminum seeds essential oil was toxic against Sitophilus oryzaeadults when it was tested by 24 hours fumigation. The LC50 was 0.67 µl/insect. Essential oil caused the insect death by the inhibition of the AChE activity (Zarrad et al. 2015, 2017a). It was also significantly repellent for these adults (Chaubey, 2011). Further, the topical application of the F. vulgare oil was toxic against S. zaemais. At 0.75 µl/insect, the mortality was 77 and 98 % after respectively, 24 and 96 hours of exposure (Rossi et al. 2012). In addition, Elumalai et al. (2010) studies showed that C. sativum and C. cyminum essential oils caused 100 % of antifeeding on S. litura L4when they were tested at 6 mg/cm2, during 24 hours. The active compounds present in the oils have a strong antifeeding activity on larvae.

Based on all these results, it appears that the use of Apiaceae essential oils in crops protection is a promoted alternative to chemical insecticides overuse and their drawbacks on environment and human health. Thus, the essential oils of six Apiaceae species used in this work could be a potential source of bioinsecticides. C.carvi shoes hight toxicity to Spodoptera littoralis larva and seems to be an alternative solution for noctuid management in greenhouses. Nevertheless, further researches have to be done, to formulate adequate preparations for insect management and the control of suitable application conditions of theses formulations.

The authors thank ECHAIHBI Kawther and KAHOULI Souad for their technical assistance. This work is supported by the project “CLEPROD” (Integrated and sustainable management of protected vegetable cropping systems), financed by IRESA, Ministry of agriculture of Tunisia.

Zarred K, Laarif A, Ben Hamouda A, Chaieb I, Mediouni-Ben Jemaa J (2017a). Anticholinesterase Potential of Monoterpenoids on the Whitefly Bemisia tabaci and Their Kinetic Studies. J Agri Sci Technol 19(3): 643-652.