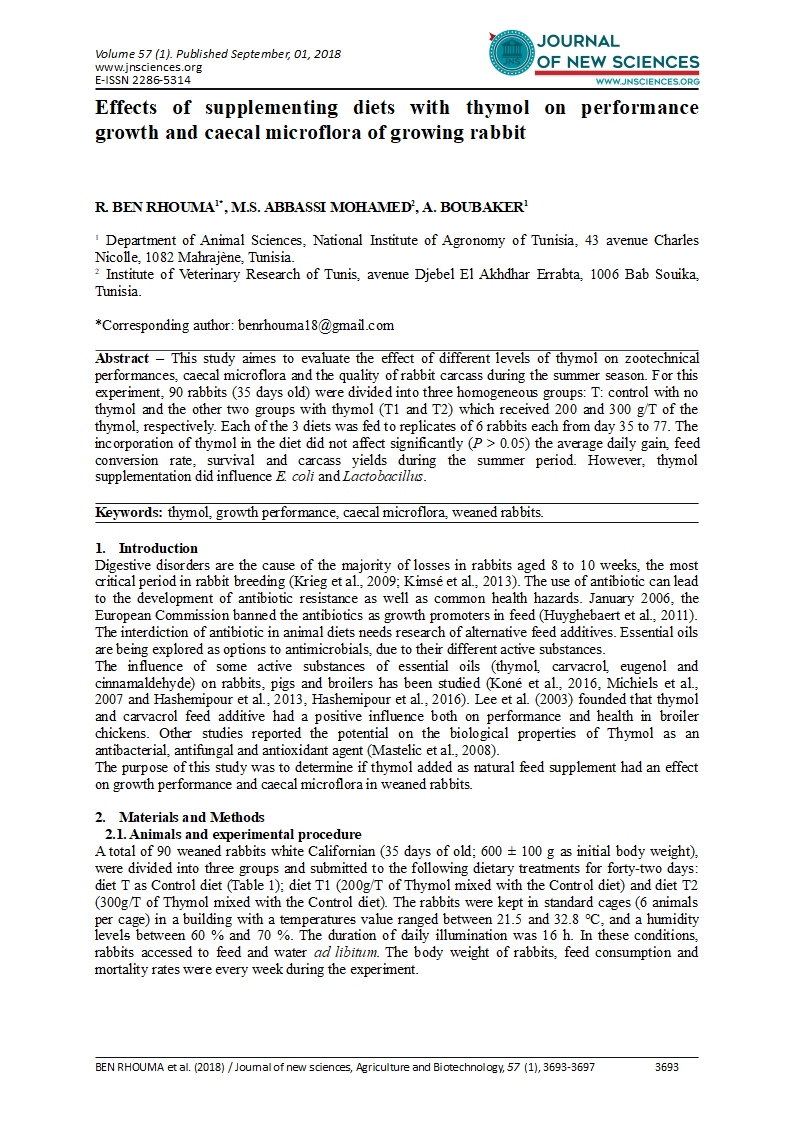 Abstract – This study aimes to evaluate the effect of different levels of thymol on zootechnical performances, caecal microflora and the quality of rabbit carcass during the summer season. For this experiment, 90 rabbits (35 days old) were divided into three homogeneous groups: T: control with no thymol and the other two groups with thymol (T1 and T2) which received 200 and 300 g/T of the thymol, respectively. Each of the 3 diets was fed to replicates of 6 rabbits each from day 35 to 77. The incorporation of thymol in the diet did not affect significantly (P > 0.05) the average daily gain, feed conversion rate, survival and carcass yields during the summer period. However, thymol supplementation did influence E. coli and Lactobacillus.

Digestive disorders are the cause of the majority of losses in rabbits aged 8 to 10 weeks, the most critical period in rabbit breeding (Krieg et al., 2009; Kimsé et al., 2013). The use of antibiotic can lead to the development of antibiotic resistance as well as common health hazards. January 2006, the European Commission banned the antibiotics as growth promoters in feed (Huyghebaert et al., 2011). The interdiction of antibiotic in animal diets needs research of alternative feed additives. Essential oils are being explored as options to antimicrobials, due to their different active substances.

The influence of some active substances of essential oils (thymol, carvacrol, eugenol and cinnamaldehyde) on rabbits, pigs and broilers has been studied (Koné et al., 2016, Michiels et al., 2007 and Hashemipour et al., 2013, Hashemipour et al., 2016). Lee et al. (2003) founded that thymol and carvacrol feed additive had a positive influence both on performance and health in broiler chickens. Other studies reported the potential on the biological properties of Thymol as an antibacterial, antifungal and antioxidant agent (Mastelic et al., 2008).

The purpose of this study was to determine if thymol added as natural feed supplement had an effect on growth performance and caecal microflora in weaned rabbits.

The performances of growth were determined. Hence, weekly individually body weight (wt.) and average daily gain (ADG) were evaluated on all rabbits. Weekly feed consumption (g/d/rabbit), feed conversion ratio (FCR) (g feed/g live body wt. gain), and mortality rate were studied. When observed, each dead rabbit was weighed to include its weights in the feed conversion estimation. Feed consumption was calculated, for each subgroup weekly to investigate the feed conversion ratio (FCR) (g feed/g live body weight). The FCR was calculated, for each subgroup as follows: Feed intake for the subgroup (kg) divided by total body weight gained for the same subgroup (kg). The total body weight included dead rabbits during the week. Carcass characteristics (dressing %, front part % and hind part %) were measured at the 11 week of age.

Three animals from each group were slaughtered on day 77 of age. Bacteria were isolated from caecal samples using the standard microbiological method with the choice of the appropriate dilutions in Ringer solution. Dilutions considered were plated onto the following media: Mac Conkey agar for E. coli and Man-Rogosa-Sharpe (MRS) for Lactobacilli incubated at 37 °C for 24 h. The bacterial counts were expressed in colony forming units per gram (log10 CFU g).

Data were analyzed by an analysis of variance (ANOVA) using the GLM procedure of SAS software and the Chi Square test for mortality rates. Differences between the means values were detected using SNK test. The results were expressed as mean ± standard deviation (SD).

The effect of feeding treatments on rabbit growth traits is shown in Table 2. Initial body weight at 35 day did not differ significantly (P > 0.05) among treatments. Overall, during the whole feeding period, average daily gain (ADG) was similar for all experimental groups as slaughter weight was not significantly different except group with dose 100 mg/kg of thymol supplementation (P < 0.05). The survival rate was not affected (P > 0.05) after the supplementation diets with thymol.

The supplementing with 100 mg/kg dose of thymol decreased the slaughter weight. Overall, there was no significant difference between the control and the experimental groups except for the average daily feed with dose 100 mg/kg of thymol supplementation after week 6 and week 9 (P = 0.05 and P < 0.05, respectively).

No significant differences (P > 0.05) were observed for feed conversion ratio in rabbits between the three diets (two doses of thymol treated and one control) which ranges from 1.74 to 10.31.

Previously studies (Botsoglou et al., 2002) in which the effects dietary supplementation of oregano essential oil to broilers on rabbit growth performance was tested with a level of 50 and 100, 150, 300 and 1000 mg/kg had did not show any beneficial effect. Cross et al., (2003), indicated that the inclusion of thyme oil had no effect on average daily gain of broilers. Similarly, Lee et al. (2003) pointed out that 200 mg/kg of thymol in diet did not affect the average daily gain, feed intake and FCR in female broilers. The reason for the lack of effects of thymol carvacrol on rabbit performances may be related to the composition of the basal diet and the environmental conditions (Lee et al., 2003).

Growth performance of the rabbits was consistent with the study of Koné et al. (2016), who did not observe any significant differences when plant extracts and essential oils were provided to rabbit feed.

The supplementation of diets with thymol did not affect the carcass yields (Table 3).

Results in Table 4 show that there were no significant differences on weight of different parts of carcass. The supplementing thymol effect on the weight of gastrointestinal organs, perianal fat and scapular fat were also illustrated.

Previous, Hernandez et al. (2004) and Sarica et al. (2005) showed that supplementation of combination of two herb extracts had no effect on chicken carcass characteristic. Likewise, Alçiçek et al. (2003) recorded that herb extract had no effect on chicken abdominal fat percentage. Contrary to our findings, it has been showed that supplementation of combination of herb contributes to an increase on percentage of dressing, front part, breast meat, carcass meat, gizzard weight and intestinal diameter, as well as an decrease in abdominal fat (Awaad et al., 2014).

The results of enumeration of E. coli, Lactobacilli at the 77 day of age are shown in Table 5.

Using an in vitro model for pigs, (Michiels et al. 2009) showed that thymol and carvacrol have the ability to inhibit lactobacilli with high degree in the stomach than in the small intestine. The inhibitory effect of thymol against lactobacilli is beneficial in the proximal gut, as it reduces the risk of acidosis. However, the stimulatory effect of cinnamaldehyde on lactobacilli is beneficial in the distal gut, as it prevents the proliferation of undesirable microorganisms.

This work was conducted to study the effects of including the Thymol in feed, as recommended for manufacturing purposes. No differences were observed in term of feed intakes and FCR during the six-week period between the rabbits fed with the Thymol or those with the control diet, while mortality rate observed for the thymol groups was the highest.

Hashemipour H., Khaksar V., Rubio L.A., Veldkamp T., Van Krimpen M.M., (2016). Effect of feed supplementation with a thymol plus carvacrol mixture, in combination or not with an NSP-degrading enzyme, on productive and physiological parameters of broilers fed on wheat-based diets. Animal Feed Science and Technology 211 (2016), 117-131.