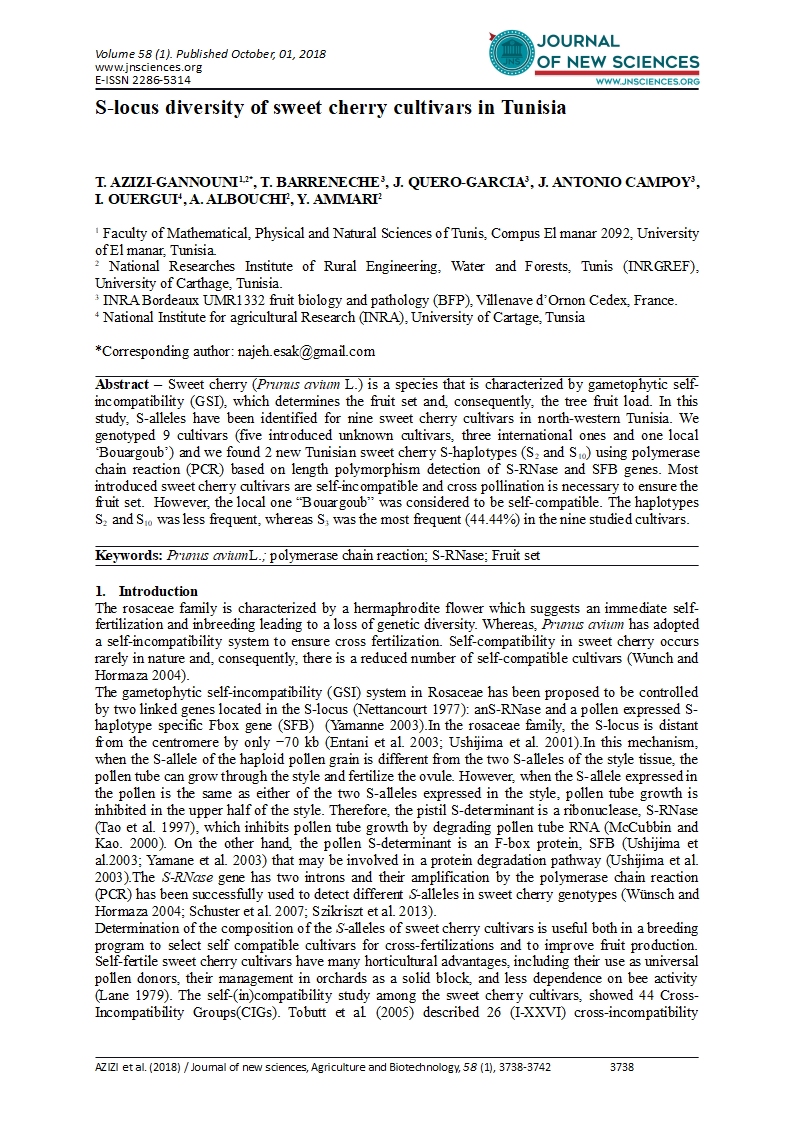 Abstract – Sweet cherry (Prunus avium L.) is a species that is characterized by gametophytic self-incompatibility (GSI), which determines the fruit set and, consequently, the tree fruit load. In this study, S-alleles have been identified for nine sweet cherry cultivars in north-western Tunisia. We genotyped 9 cultivars (five introduced unknown cultivars, three international ones and one local ‘Bouargoub’) and we found 2 new Tunisian sweet cherry S-haplotypes (S2 and S10) using polymerase chain reaction (PCR) based on length polymorphism detection of S-RNase and SFB genes. Most introduced sweet cherry cultivars are self-incompatible and cross pollination is necessary to ensure the fruit set. However, the local one “Bouargoub” was considered to be self-compatible. The haplotypes S2and S10 was less frequent, whereas S3 was the most frequent (44.44%) in the nine studied cultivars.

The rosaceae family is characterized by a hermaphrodite flower which suggests an immediate self-fertilization and inbreeding leading to a loss of genetic diversity. Whereas, Prunus avium has adopted a self-incompatibility system to ensure cross fertilization. Self-compatibility in sweet cherry occurs rarely in nature and, consequently, there is a reduced number of self-compatible cultivars (Wunch and Hormaza 2004).

The gametophytic self-incompatibility (GSI) system in Rosaceae has been proposed to be controlled by two linked genes located in the S-locus (Nettancourt 1977): anS-RNase and a pollen expressed S-haplotype specific Fbox gene (SFB) (Yamanne 2003).In the rosaceae family, the S-locus is distant from the centromere by only −70 kb (Entani et al. 2003; Ushijima et al. 2001).In this mechanism, when the S-allele of the haploid pollen grain is different from the two S-alleles of the style tissue, the pollen tube can grow through the style and fertilize the ovule. However, when the S-allele expressed in the pollen is the same as either of the two S-alleles expressed in the style, pollen tube growth is inhibited in the upper half of the style. Therefore, the pistil S-determinant is a ribonuclease, S-RNase (Tao et al. 1997), which inhibits pollen tube growth by degrading pollen tube RNA (McCubbin and Kao. 2000). On the other hand, the pollen S-determinant is an F-box protein, SFB (Ushijima et al.2003; Yamane et al. 2003) that may be involved in a protein degradation pathway (Ushijima et al. 2003).The S-RNase gene has two introns and their amplification by the polymerase chain reaction (PCR) has been successfully used to detect different S-alleles in sweet cherry genotypes (Wünsch and Hormaza 2004; Schuster et al. 2007; Szikriszt et al. 2013).

Determination of the composition of the S‑alleles of sweet cherry cultivars is useful both in a breeding program to select self compatible cultivars for cross-fertilizations and to improve fruit production. Self-fertile sweet cherry cultivars have many horticultural advantages, including their use as universal pollen donors, their management in orchards as a solid block, and less dependence on bee activity (Lane 1979). The self-(in)compatibility study among the sweet cherry cultivars, showed 44 Cross-Incompatibility Groups(CIGs). Tobutt et al. (2005) described 26 (I-XXVI) cross-incompatibility groups when using traditional open field fruit set and molecular analyses. The number of the CIGs was later increased to 35after S-genotyping sweet cherry accessions and cultivars in the German fruit gene bank and private collections (Schuster et al. 2007). Later, groups XXXVIIXL (Marchese et al. 2007), XLI (Gisbert et al. 2008) and XLII-XLIV (Ipek et al. 2011) were also described. In addition, Békefi et al. (2010) also described a group labelled as XLII but with a different genotype and hence the number of existing groups is currently 45 (Szikriszt 2013).

Until now, the local cultivar ‘Bouargoub’ has remained unstudied at the molecular level, especially the self-(in)compatibility locus. Asserting that the local one is a self-compatible cultivar (SC) and that (SC) is not related to the S-locus are of great interest in the areas of breeding programs and cultivar enhancement. This study was carried out to determine the S-allelic constitution involved in the Gametophytic Self Incompatibility (GSI) in the sweet cherry (Prunus avium L.) of local and foreign cultivars, using the PCR method with allele-specific primers cultivated in the north west of Tunisia.

The analyses were conducted for nine sweet cherry cultivars (Prunus avium L.) growing in two different altitude experimental sites (Ain-Draham and Bou-Salem) located in the north west of Tunisia. The four known cultivars of ‘Bouargoub’, ‘Moreau’, ‘Stella’, and ‘Sunburst’ were used in Ain-Draham; and the five unknown cultivars coded as ‘V1’, ‘V2’, ‘V3’, ‘V4’ and ‘V5’, were used in Bou-Salem.

S-genotyping by PCR analysis revealed six different S-haplotypes among the nine analyzed cultivars. All of them have been previously described for the species (S1, S2, S3, S4’, S9 and S10).S-genotyping of 9 sweet cherry genotypes allowed detection of 9 different S-alleles; S1, S2, S3, S4’, S9 and S10 with allele frequencies 22.2%, 11.11%, 88.88%, 44.44%, 33,33% and 11.11% respectively. This result is different from those found by Tobut et al. (2004) and Ipek et al.(2011) which can be explained by the number of genotypes used and/or genetic loss and mutation over gene flow during the dispersal of seeds across the great geographical distance between Tunisia and the different countries of Europe. Nevertheless S3was the most frequent allele in Tunisian cultivated cultivars and had a higher frequency than those detected in Poland in the study of Lisek et al.(2015) and in the Jerte Valley (western Spain) and in the plant material from Catalonia, Castellon and Baleares (eastern Spain) (Cachi and Wunch, 2014). Furthermore, a comparison of the Czech and Ukrainian cultivars in the study of these latter authors showed that the allele S3was much more frequently found in the Czech cultivars, while the alleles S2 and S9 occurred with much higher frequency in the Ukrainian cultivars, the common origin of the introduced cultivars adapted to Tunisian climatic conditions. A significantly higher frequency of haplotypes S1, S2, S3 and S4’was detected in the collection originating from the area surrounding Prague in the study of Sharma et al. (2017). This was caused by the higher probability of gene-flow between the local wild germplasm and the cultivars of sweet cherry. This can help to identify the approximate origin of the introduced varieties in Tunisia.

Haplotype S10 has been detected in wild cherry (Cachi et al. 2017). Its low frequency and specific haplotype of Tunisian cultivar indicate its native occurrence with a Spanish wild cherry origin. This would be because the two countries belong to the Mediterranean shore.

The results reveal the S-locus diversity of sweet cherry in Tunisia. All accessions had two S-alleles for both genes tested. It's a preliminary work that will be more in-depth for the ‘Bouargoub’ cultivar. The S-locus of the local cultivar “Bouargoub” was investigated in this study for the first time and their two putative S-haplotypes were detected and labeled S2 and S10. Haplotypes S3 and S9 were the most frequent and were widely distributed across Mediterranean regions, whereas S2 and S10 were only found in the local cultivar ‘Bouargoub’ and can be considered characteristic of Tunisian plant material. Comparison of S-haplotype frequencies worldwide and within Europe showed that S2 is almost exclusive to northern Europe. The existence of this allele in the Tunisian area may be due to a common origin or genetic relationship between local and European cultivars. Alternatively, there may be an association of certain S-haplotypes with adaptive traits correlated to climatic conditions in the different areas (Cashi and Wunch 2014). In the study of Cachi et al. (2016), S2 and S10 were frequently found in wild cherry, however S9 was rare in wild cherry (De Cuyper et al. 2005; Ganopoulos et al. 2012) but very common in sweet cherry (Schuster 2012). The presence of the two alleles S2 and S10 all over the European and Asian areas with different frequencies shows gene flow is one of the means of their installation in Tunisia. This phenomenon is explained first by transport of pollen and seeds by wind, insects and other animals, to new remote populations of the site and secondly by crossbreeding of individuals belonging to neighboring populations. These results confirm the presence of a correlation between certain S-haplotypes and their adaptation to different climate conditions.

Our results reported that ‘Bouargoub’ has the same S-alleles (S2S10) as ‘Bademli 0898’ and ‘Tabanlı’ used in the study of Ipek et al. (2011) and belongs to the new proposed incompatibility group XLII. Surprisingly, this cultivar has been considered for a long time to be a self-compatible cultivar based on its fruit set (Azizi-Gannouni et al. 2017). We can assume that “Bouargoub” is similar to ‘Cristobalina’ (a Spanish spontaneous self-compatible sweet cherry cultivar) and the self-compatibility is not related to the S-haplotype and it can be caused by mutation and/or failure of pollen function. The self-compatibility in ‘Cristobalina’ was caused by a pollen modifier locus not linked to the S-locus (Cachi and Wunsch 2011). The same case has been observed in some self-compatible genotypes of apricot (Prunus armeniaca) (Vilanova et al. 2006; Wu et al. 2011). The transition from self-incompatiblity to self-compatibility or the loss of self-incompatibility is common in angiosperms (Levin 1996; Igicet al. 2008) and has been well studied in species of Brassicaceae and Solanaceae like Arabidopsis or Solanum spp. (Mena-Ali and Stephenson 2007; reviewed by Igic et al. 2008).

The cultivar ‘Bouargoub’ possesses the same characteristics as ‘Cristobalina’, is limited to northern Tunisia on the Mediterranean shore, has a low winter chilling requirement, and is a very early flowering cultivar (Azizi-Gannouni et al. 2017).

According to the results obtained, the three foreign cultivars V1 (S3S9), V3 (S1S9) and V5 (S1S3) should be semi-compatible between them from a genetic point of view, since each one of them shares an identical S-haplotype.

The introduced cultivars ‘V2’, ‘V4’, ‘Sunburst’ and ‘Stella’ are heterozygote for the S-haplotype allele (S3S4’) belong to the group SC, which identifies them as universal pollen donors.

As shown, the foreign introduced cultivars ‘V1’ and ‘Moreau’ possess the same S-alleles (S3and S9), which means that there is a complete gametophytic incompatibility between them and belonging to the same incompatibility group. This is very important information for breeders and growers when choosing cultivars for cross-fertilization, especially as ‘Moreau’ is one of the most frequently used cultivars as a pollinator of sweet cherry cultivars.

This study represents the first comprehensive S-genotype identification of local and introduced cultivars in Tunisia useful for the conservation of S-alleles. S-genotyping information in the self-fertile local cultivar “Bouargoub” is required for both orchard use and genetic analysis, especially since self-fertility is not gametophytic. More extensive pollen compatibility analysis is needed for the study of the self-compatibility of the local cultivar “Bouargoub”.

Mena-Ali J.I, Stephenson A.G. (2007) Segregation analyses of partial self-incompatibility in self and cross progeny of Solanumcarolinensereveal a leaky S-allele. Genetics. 177:501–510.