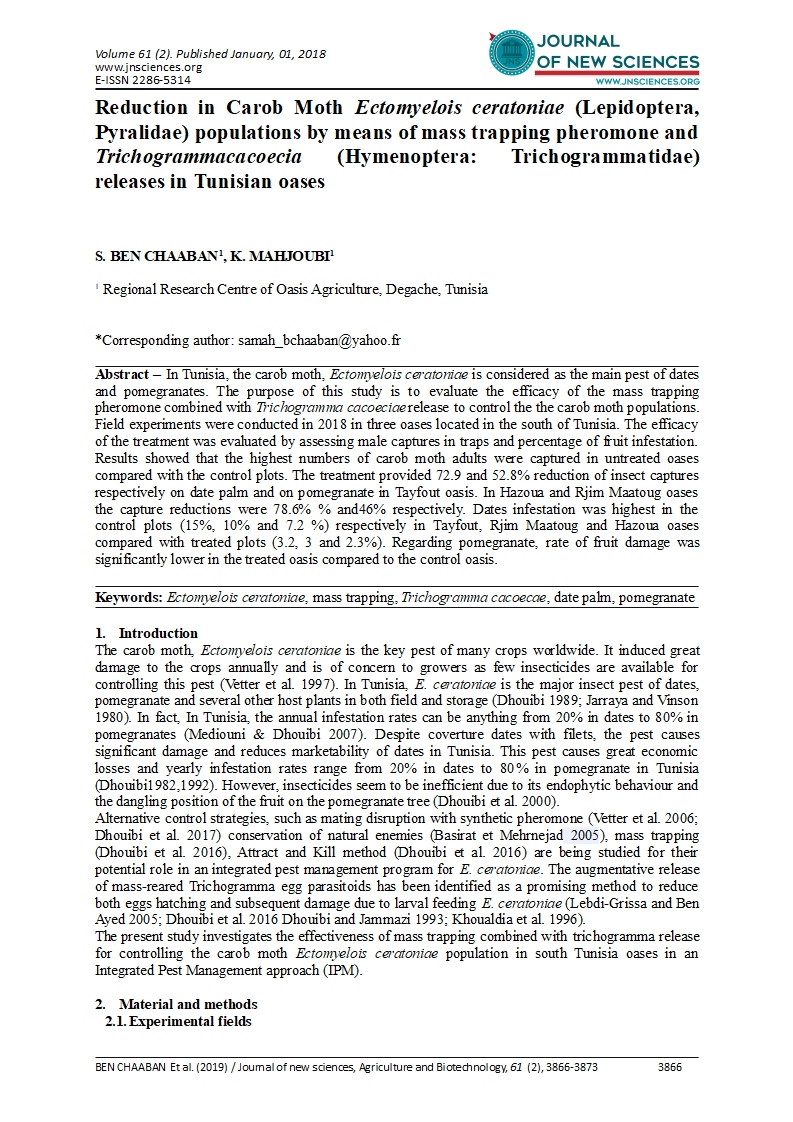 Abstract – In Tunisia, the carob moth, Ectomyelois ceratoniae is considered as the main pest of dates and pomegranates. The purpose of this study is to evaluate the efficacy of the mass trapping pheromone combined with Trichogramma cacoeciae release to control the the carob moth populations. Field experiments were conducted in 2018 in three oases located in the south of Tunisia. The efficacy of the treatment was evaluated by assessing male captures in traps and percentage of fruit infestation. Results showed that the highest numbers of carob moth adults were captured in untreated oases compared with the control plots. The treatment provided 72.9 and 52.8% reduction of insect captures respectively on date palm and on pomegranate in Tayfout oasis. In Hazoua and Rjim Maatoug oases the capture reductions were 78.6% % and46% respectively. Dates infestation was highest in the control plots (15%, 10% and 7.2 %) respectively in Tayfout, Rjim Maatoug and Hazoua oases compared with treated plots (3.2, 3 and 2.3%). Regarding pomegranate, rate of fruit damage was significantly lower in the treated oasis compared to the control oasis.

The carob moth, Ectomyelois ceratoniae is the key pest of many crops worldwide. It induced great damage to the crops annually and is of concern to growers as few insecticides are available for controlling this pest (Vetter et al. 1997). In Tunisia, E. ceratoniae is the major insect pest of dates, pomegranate and several other host plants in both field and storage (Dhouibi 1989; Jarraya and Vinson 1980). In fact, In Tunisia, the annual infestation rates can be anything from 20% in dates to 80% in pomegranates (Mediouni & Dhouibi 2007). Despite coverture dates with filets, the pest causes significant damage and reduces marketability of dates in Tunisia. This pest causes great economic losses and yearly infestation rates range from 20% in dates to 80% in pomegranate in Tunisia (Dhouibi1982,1992). However, insecticides seem to be inefficient due to its endophytic behaviour and the dangling position of the fruit on the pomegranate tree (Dhouibi et al. 2000).

The experimental design consisted of fifteen white delta traps baited with the sex pheromone ((Z,E)-7,9,11,-dodecatrien-1-ol formate) suspended on dates palm trees in grapes, and hung to pomegranate trees at a height of 1.5 min Blidet oasis. The traps were checked fortnightly and the trapped moths were counted and removed from the traps. Population monitoring had been carried out from may 2016 and continued until the end of this experiment. The pheromone baits were also changed with fresh ones in every four weeks. The indigenous strain of T. cacoecae, was previously collected from the Tozeur governorate, Tunisia. Rearing of the parasitoid was performed on eggs of E. kuehniella (Lepidoptera: Pyralidae), which were routinely reared in the laboratory at 25±1 °C, 60±10% relative humidity, and a 16:8 photoperiod.

At harvest, ten palm date were selected from each orchard were tagged for sampling. These trees were chosen at random to assure coverage of the orchard, 2 trees located in the North, South, West, East and in the middle of oases. Samples of 25 abscised fruit was collected from the north, south, east, west and middle of the trees at an intermediate height, totalling100 fruits/tree. The fruits were dissected in the laboratory to evaluate the infestation rates of E. ceratoniae.

The percentages of abscised fruit per date palm or pomegranate with infestation were compared between treatment and control by an analysis of variance (ANOVA). The capture inhibition was calculated as (1-average plot catch/average control plot catch ).

Catches data from monitoring traps on date palm and pomegranate were collected fortnightly in Tayfout treated plot and were compared to the control (Figure 1). Pheromone trap fixed on date palm and pomegranate showed a presence of E. ceratoniae population from May16 until the first week of November, but seasonally fluctuating. Prior to the establishment of the experiment, the adult E. ceratoniae population on date palm densities were7.5 in treated plot and 8.5 in the control plot, corresponding to the overwintering populations.

The population on date palmand on pomegranate trees increased mainly in September and October. The highest of insect numbers caught on date palm and pomegranate, were recorded at 3/10.The results showed that the traps captured 421 and121 male moths respectively on date and on pomegranate during a period of survey. Regarding to the mean carob moth captures, differences were observed between the treated and the control orchards regarding date palm (F(1, 18) = 13.9, P< 0.05). Considering pomegranate there were no significant differences among the mean of captures between treatment and control (F(1, 18) = 3.9, P= 0.063).

The efficacy of the mass trapping combined with Trichogramma release was also performed by the estimation of the capture inhibition for treatments provided 72.9 and 52.8 reduction respectively on date palm and on pomegranate. Treatment Efficacy was also executed at harvest, we evaluated the effect of different treatments on the evolution of the infestation level by examining respectively samples of abscised date fruits and pomegranate fruits (Figure4) the infestation level by E. ceratoniae decreased to reach3.2% compared to 15% in the control plot and 4% compared to 20% (Figure 4).

Pheromone trapping took place on date palms between May 10 and October 25, on the Hazoua oasis. The seasonal activity of the pest varied during the sampling period in treated and control oases (Figure 2). The captures increased steadily, peaking on 28 June, and then falling reaching a second peak on 17 August captures increased at that point while it decreased from the end of August to October.

The males captured in the pheromone traps indicate that mass trapping combined with cacoeciae release significantly lowered the rate of infestation of E. ceratoniae relative to the control plot (F (1, 20) = 5.147, P < 0.05). The total of trapped E. ceratoniae was98 male in the treated plot, the corresponding trap inhibition was 78.6%.

From May until harvest of dates, we evaluated the effect the mass trapping and trichogramma release on the evolution of the carob moth populations in RjimMaatoug oasis.

Pheromone trap catches showed an always present, but seasonally fluctuating population from May20until October 28(Figure3). The infestation rate in control and treated plots increased gradually until4August, and reached a maximum 4 and 1,33 of for the control and treated plot. The treatement lowered the infestation. Nevertheless, no statistical differences were observed between treated and control plots (F (1, 20) = 3.01, P=0.098), and the corresponding trap inhibition was 46 %. Likewise, the percentage of infested date fruits obtained in the control plot (Figure 4) was approximately 3 times higher than that of the treated plot with respectively 10 and 3 %.

Throughout the entire survey period, the major flight period of carob moth was occurred from may through October in all studied plots. The increases recorded in the spring period, especially in May and June, are to be considered as a consequence of the emergence of the pest population that overwinters as mature larvae or pupae. The main annual peaks occurred during August, September or October months. This peak coincides with pomegranate anddates ripening period. Whereas the population remained at low levels from November, with few trap catches found.

The highest number of male adults per pheromone-baited trap was different according to the locality of oasis. In fact, in the different oases, the most important peak of captured males was detected at 3/10 in Tayfout (20 males/trap on date palm and 7 males/trap on pomegranate), at 1/8 in Hazoua (7 males/trap) and at 4/8inRjimMarzoug. Previous studies demonstrated that the generation of the carob moth in oases can be differed according to the locality of oasis type of vegetation which it occurs and by temperature (Demirel 2016, Dhouibi2017). The development cycle of the carob moth takes 48 days at 20°C, 30 days at 25°C and 23 days at 30°C (Cox1976).

The main purpose of our study was to reduce, E. ceratoniae, improving the mass trapping technique and Trichogramma cacoecia release. The current study demonstrated that the pressure exert by E.ceratoniae and its damage on date palm and pomegranate significantly decreases by the adopted treatment. Reduction in moth catches also corresponded well with the reduction in fruit damage on dates and pomegranate fruits.

Nowadays, pheromones and other semiochemicals are applied to monitor and control pests in millions of hectares (Senthil-Nathan2015) and the diversity of applications of pheromones is increasing (Copping1998). Pheromone attraction between males and females in Lepidoptera is common and well known (Jurenka 2003). For that the seasonal flight period of E. ceratoniae was established by the use of pheromone traps in many countries (Demirel et al. 2016; Norouzi et al. 2008; Lebdi-Grissa and Ben Ayed 2005). Moreover, Pheromones are used in mass trapping for control of insect pests has been suggested for a number of Lepidoptera pests (Tan et al. 1996). Mass trapping to target lepidopteran pests consists of deploying traps baited with sex pheromone to attract and catch males before they locate and mate with females (El-Sayed et al. 2006). In this regard, Mediouni (2005) found that the control of E. ceratoniae trapping with pheromones at 12traps per hectare in pomegranate orchard provided decreased to 4.5% in 2004 compared to 28% in 2001 in the control plot. According to Dhouibi et al. (2016), reported that the use of 10 delta traps per hectare in pomegranate orchard was effective in controlling of the carob moth. In fact, after 16 days of the treatment, the reduction of the infestation rate reached 100%. However, no study has mass trapping method against carob moth on dates.

Egg parasitoids of the genus Trichogramma have been used successfully as inundative biological control agents against the eggs of a large number of important lepidopteran pests and are the most widely used natural enemies in biological control worldwide (Li 1994; Smith 1994; Hassan 1993).It is considered as the most described parasitoid genus, and consists of approximately 180 species (Rohi et Pintureau 2003). They are the most widely used biological control agents, partly due to their easy mass rearing and their potential to kill many important crop pests before they leave the egg and cause feeding damage (Hassan1985; Ulrichs et Mewis2004). Different native species of Trichogramma have been evaluated for controlling the carob moth pomegranate orchards, (Moezipour 2006; Sayed 2015; Ksentini et al. 2010). In Tunisia T. cacoecae has great potential as a biological control agent, particularly because it’s a native Trichogramma matching with Tunisian ecological conditions (Lebdi-Grissa et Ben Ayed 2005; Dhouibi et al. 2016; Dhouibi et Jammazi 1993; Khoualdia et al. 1996). Doses used in fields vary from one study to another. For example, for a single release of 25000 Trichogramma/ha (3000 eggs/Pomegranate tree) significantly lowered the level of infestation. In fact, the infestation in the plot selected for these releases decreased from 30% (control plot) to 12%(Dhouibi2016).Moreover, Lebdi et Ben Ayed (2006), founded that the release of Trichogramma cocaeciae, in Tastour on pomegranates orchard reduced the infestation percentage from 13.2% to 2.4%.For example inundative release of a total of 157000 eggs/ha on date palms reduced the infestation level from 16.5% in the control plot to 3.5% in the treated plot (khoualdia 2006).

The mass-trapping technique combined with T. cacoecae release included in an IPM program that includes improved date orchard sanitation techniques showed some promise for suppressing low-density populations of E. ceratoniae. The study one of the first to evaluate Trichogramma release under a mass trapping regime. We need improvement of mass trapping and T. cacoecae releases on a long-term study, more than one year. We need mainly to further study the timing and number of releases and T. cacoecae doses for the use of this control agent over large areas.

We would like to thank reviewers for their comments and suggestions, helpful to improve the first draft of the manuscript. We acknowledge financial support from the VacpaBoujbel. The authors wish to thank staff VacpaBoujbel for his assistance during field surveys include. and the farmers in and for permission to use their crop fields

Rohi L, Pintureau B (2003) Are Trichogramma bourarachae and the perkinsi species group really distinct from Trichogramma buesi and the pintoi group, respectively? Journal of Applied Entomology 127: 265-268

Senthil-Nathan S (2015) A review of biopesticides and their mode of action against insect pests, in: Environmental Sustainability, Springer, India, 49-63