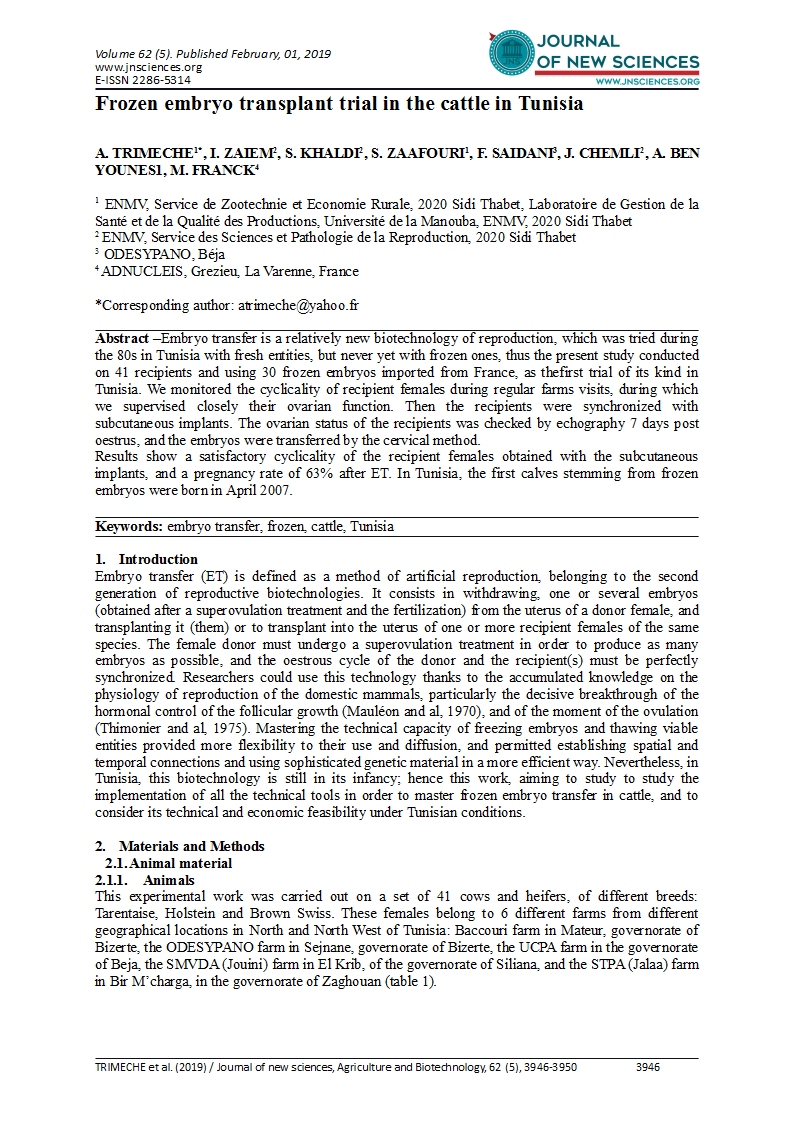 Abstract –Embryo transfer is relatively new biotechnology of reproduction, which was tried during the 80s in Tunisia with fresh entities, but never yet with frozen ones, thus the present study conducted on 41 recipients and using 30 frozen embryos imported from France, as thefirst trial of its kind in Tunisia. We monitored the cyclicality of recipient females during regular farms visits, during which we supervised closely their ovarian function. Then the recipients were synchronized with subcutaneous implants. The ovarian status of the recipients was checked by echography 7 days post oestrus, and the embryos were transferred by the cervical method. Results show a satisfactory cyclicality of the recipient females obtained with the subcutaneous implants, and a pregnancy rate of 63% after ET. In Tunisia, the first calves stemming from frozen embryos were born in April 2007.

Embryo transfer (ET) is defined as a method of artificial reproduction, belonging to the second generation of reproductive biotechnologies. It consists in withdrawing, one or several embryos (obtained after a superovulation treatment and the fertilization) from the uterus of a donor female, and transplanting it (them) or to transplant into the uterus of one or more recipient females of the same species. The female donor must undergo a superovulation treatment in order to produce as many embryos as possible, and the oestrous cycle of the donor and the recipient(s) must be perfectly synchronized. Researchers could use this technology thanks to the accumulated knowledge on the physiology of reproduction of the domestic mammals, particularly the decisive breakthrough of the hormonal control of the follicular growth (Mauléon and al, 1970), and of the moment of the ovulation (Thimonier and al, 1975). Mastering the technical capacity of freezing embryos and thawing viable entities provided more flexibility to their use and diffusion, and permitted establishing spatial and temporal connections and using sophisticated genetic material in a more efficient way. Nevertheless, in Tunisia, this biotechnology is still in its infancy; hence this work, aiming to study to study the implementation of all the technical tools in order to master frozen embryo transfer in cattle, and to consider its technical and economic feasibility under Tunisian conditions.

These different farms are subject to a permanent health monitoring by private or state veterinarians.All females with reproductive or general health problems were excluded from the experiment, andrecipient females were chosen among breeding heifers and cows with a good general state, and underwent a flushing and a steaming dietary supplementation, as a part of their preparation to the ET. Then they weresubmitted to a synchronization hormonal treatment. At the day of ET, 35 females were selected, and a cow seen in heat one week before was added to the recipients group, as shown in table 2.

A total number of 30 frozen embryos were imported from the Union des Coopératives d'Elevage Rhônes-Alpes (UCEAR, Lyon, France). These embryos belong to three different breeds: Tarentaise, Abondance and Holstein. These embryos were harvested on the 7th day after the donor’s insemination, at a developmental stage ranging from compact morula to blastocyst, then underwent 2 freezing protocols: the conventional freezing method, using glycerol 10% (1.4 M), and the “one step” method employing ethylene glycol (1.7 M), as specified in the table 3.

The use of Norgestomet-based subcutaneous implants (Crestar, ND) allows the control of the cow sexual cycles. Implants are kept in place for 9 days, and 48 hours before their removal, donors receive an IM injection of Pgf2α (Prostavet, ND), with the intention of lysing a possible corpus luteum and thus obtaining a better synchronization. It is indispensable to monitor the oestrous 24 to 48 hours after the implants withdrawal, and we proceed to the ET 7 days after the heat.

There are different techniques to thaw embryos, employed according to the method of freezing. With the conventional technique, thawed embryos must be freed of their cryoprotectant (glycerol), by being washed through successive baths, in less and less concentrated environments. Embryos frozen with ethylene glycol will be thawed in a water bath at 25-28 ° C, for 20 seconds, and transferred directly in the uterus of the recipient female.

As for the placement of embryos, trans-rectal palpation should be performed to determine the ovary with a corpus luteum on the day of the transfer, and the embryo is deposited in the lumen of the ipsilatéral uterine horn,using a Foley catheter covered in a sanitary sheath,through the natural channels as for artificial insemination. However, this operation is done at a moment of the cycle when the cervix is closed, and will be therefore more delicate than a regular AI. In addition, the embryos are not deposited at the exit of the cervix, but at the anterior third of the uterine horn.

All female recipients received one single embryo each, and the possibly pregnant females are singled out 14 days post ET, as they do not recover their oestrous cyclicality at this date, and do not exhibit any heat behaviour. We proceed to an echography at Day 30, to confirm the pregnancy diagnosis.

The response to the synchronization treatment, the time of onset of heat after the removal of implants varies from one female to another, as well as the intensity of the expression of heat, ranging from a simple behavioural modification and doubtful heat, to its full expression, with all of its components. The definitive choice of the recipients occurred on the day of the ET, after the trans-rectal and ultrasound examination of the ovaries. The gynaecological examination led to the exclusion of 11 recipients because they showed smooth ovaries or very poorly developed corpus lutea.

This elimination rate, close to the 30%, matches the observations registered by several authors (Mazouz and Coll 1992, Thibier and Bosc, 1989, Ben Hammouda, 2005). This result is partly related to the rigorous selection of the recipients on the gynaecological and sanitary levels.

Moreover, at Day 35 post ET, 16 of the 24 recipient females that received Tarentaise or Abondance embryos, were pregnant (66%). In addition, a success rate of 50% was registered in the 6 females that received Holstein embryos.The finals results show 19 pregnancies among 30 recipients (table 4), with a total pregnancy rate of about 63%. The first births of calves (photos 1 and 2) issued of frozen embryos in Tunisia occurred in April 2007.

The transfer of frozen bovine embryos, in farms, under field conditions, was crowned with a success rate of 63%. This rate of obtained pregnancies is one of the best results found in similar studies, using different methods of embryos freezing (Mazouz and al., 1992, Otter, 1994, Vincent and al., 1994). Our resultsmay be explained by the fact that most of the transfers were made in young females, heifers or primiparous, using high-quality embryos, and by the meticulous criteria relating to the health state,and the accurate choice of the reference heat and the balanced diet. Besides, there is no significant difference between the results of the ET using the classically frozen embryos, and the vitrified ones, but the limited number of the recipients does not allow any conclusion in favour of one particular technique. Undeniably, the operator technical skills are an important factor for the success of the whole operation.

On the other hand, the results obtained with the transfer of the classically frozen embryos are inferior to the ones using embryos frozen by the One Step method, employing ethylene glycol. This might be can be linked to the reduced number of the transferred embryos by the use of a reduced number of embryos, as it is the first trial of ET using frozen embryos in Tunisia, and the experiment needs to be renewed on a larger scale, especially if the genetic improvement managers at the national level wish to introduce the technique of testing bulls that would be used in AI centres.

In Tunisia, embryo transfer meets an increasing interest for scientific research, and this trial of implanting frozen embryos in the cattle is the first of its kind, leading to the birth of 19 living calves, issued from classically frozen and vitrified embryos. The technique is fully mastered, with comparable results to those obtained in other countries.In spite of the proveninput of ET regarding genetic improvement, and the facilitation of the movement of animal material between countries in an era where emerging diseases are scrutinized, this technique is not yet used on the field in Tunisia because breeders are not sufficiently informed and sensitized to introduce this biotechnology into their livestock.

This work is carried out as part of an IRESA research project, code 1403115 “Embryo Transfer in cattle: implementation of tools and study of feasibility in Tunisia”. We would like to thank all the breeders who participated in the success of this program. The authors Thank Dr Zmerli Moez and Mr Notin Daniel for their helps to success this work.