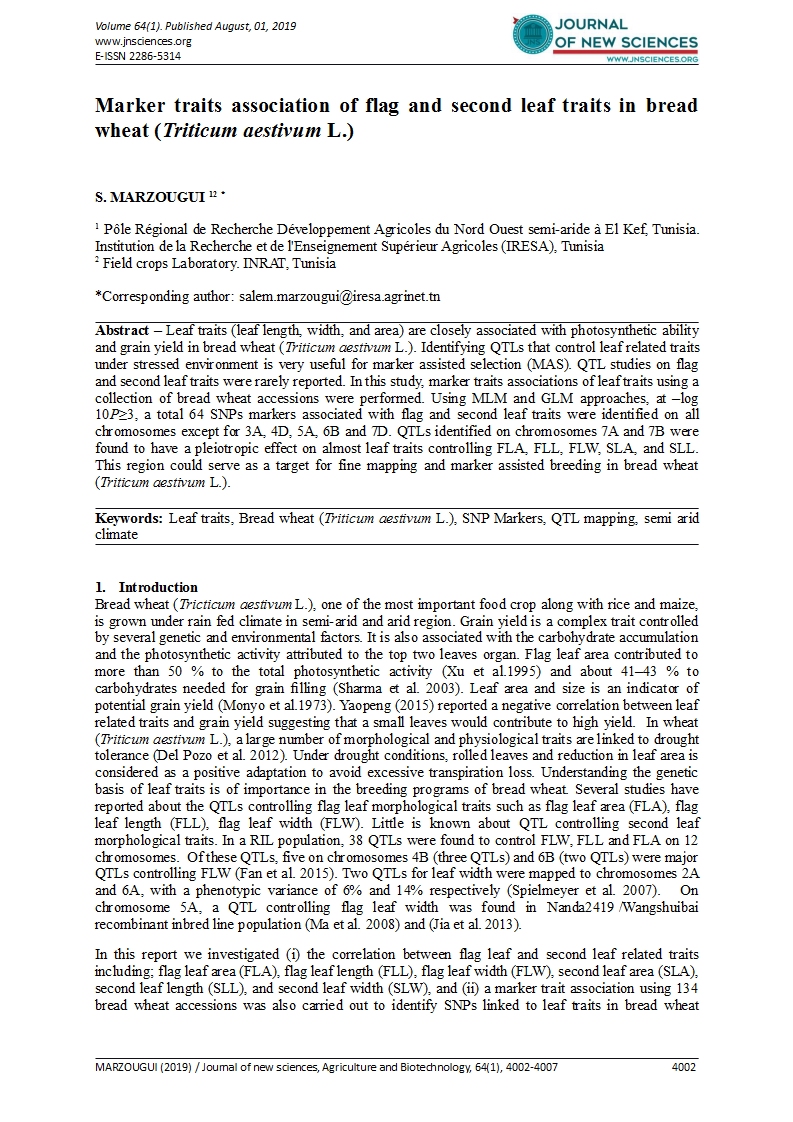 Abstract – Leaf traits (leaf length, width, and area) are closely associated with photosynthetic ability and grain yield in bread wheat (Triticum aestivum L.). Identifying QTLs that control leaf related traits under stressed environment is very useful for marker assisted selection (MAS). QTL studies on flag and second leaf traits were rarely reported. In this study, marker traits associations of leaf traits using a collection of bread wheat accessions were performed. Using MLM and GLM approaches, at –log 10P≥3, a total 64 SNPs markers associated with flag and second leaf traits were identified on all chromosomes except for 3A, 4D, 5A, 6B and 7D. QTLs identified on chromosomes 7A and 7B were found to have a pleiotropic effect on almost leaf traits controlling FLA, FLL, FLW, SLA, and SLL. This region could serve as a target for fine mapping and marker assisted breeding in bread wheat (Triticum aestivum L.).

Bread wheat (Tricticum aestivum L.), one of the most important food crop along with rice and maize, is grown under rain fed climate in semi-arid and arid region. Grain yield is a complex trait controlled by several genetic and environmental factors. It is also associated with the carbohydrate accumulation and the photosynthetic activity attributed to the top two leaves organ. Flag leaf area contributed to more than 50 % to the total photosynthetic activity (Xu et al.1995) and about 41–43 % to carbohydrates needed for grain ﬁlling (Sharma et al. 2003). Leaf area and size is an indicator of potential grain yield (Monyo et al.1973). Yaopeng (2015) reported a negative correlation between leaf related traits and grain yield suggesting that a small leaves would contribute to high yield. In wheat (Triticum aestivum L.), a large number of morphological and physiological traits are linked to drought tolerance (Del Pozo et al. 2012). Under drought conditions, rolled leaves and reduction in leaf area is considered as a positive adaptation to avoid excessive transpiration loss. Understanding the genetic basis of leaf traits is of importance in the breeding programs of bread wheat. Several studies have reported about the QTLs controlling flag leaf morphological traits such as flag leaf area (FLA), flag leaf length (FLL), flag leaf width (FLW). Little is known about QTL controlling second leaf morphological traits. In a RIL population, 38 QTLs were found to control FLW, FLL and FLA on 12 chromosomes. Of these QTLs, five on chromosomes 4B (three QTLs) and 6B (two QTLs) were major QTLs controlling FLW (Fan et al. 2015). Two QTLs for leaf width were mapped to chromosomes 2A and 6A, with a phenotypic variance of 6% and 14% respectively (Spielmeyer et al. 2007). On chromosome 5A, a QTL controlling flag leaf width was found in Nanda2419 /Wangshuibai recombinant inbred line population (Ma et al. 2008) and (Jia et al. 2013).

The genetic material evaluated in this study including 134 bread wheat genotypes (Triticum aestivum L.) was selected from the U.S National Plant Germplasm System (NPGS). All accessions were typed with 1744 SNP markers selected from the iSelect 90K array containing 90,000 wheat SNP markers (Cavanagh et al. 2013) and (Wang et al. 2014). Genotypic data of the 134 selected accessions are publicly available on https://triticeaetoolbox.org/wheat. The positions of SNP markers along chromosomes in terms of genetic distance (cM) were based on the wheat 2014 consensus genetic map (Wang et al. 2014). Markers were removed if they were either monomorphic or exhibited allele frequencies of less than 5% (minor alleles).

Field trials were conducted under rain fed condition in the research station, ElKEf, Tunisia, characterized by a semi arid climate with an annual rainfall below 380 mm. All accessions were planted in two rows, 2.5 m long and a row spacing of 25 cm. The measurement of flag leaf and second leaf related traits was performed using Image J (Abramoff MD 2004), a Java-based image processing program developed at the National Institutes of Health. Leaf length was measured at 10 days after heading, from the beginning of the ligule to the top of the leaf and leaf width was taken at the widest part of the leaf.

For each of the leaf traits, descriptive statistical measures were obtained based on the average data of the 134 bread wheat accessions. The data on all traitswere subjected to variance. Correlation matrix between all leaf traits was performed using theR package: Performance Analytics (Brian GP 2014).

The results from the descriptive statistics and the correlation matrix of the investigated characteristics are presented in Table 1 and in figure 1. The flag leaf area (FLA) ranged from 6.5 cm2 to 34 cm2 with a mean value of 14.53 cm. In all accessions, the second leaf shows a larger area than the flag leaf with a mean of 22.79 cm2. The second leaf was longer than the flag leaf with 20.39 cm and 13.07 cm respectively. In both traits, the flag leaf represents 65% of the second leaf. All skewness and kurtosis values were less than 1.0 except for FLA, indicative of continuous variation and a quantitative genetic basis controlled by multiple genes. All leaf traits are positively correlated with each other (P< 0.001).

Using GLM approach, without taking into account the kinship matrix (Q) and the estimated population structure (K), 50 associated SNPs to the studied traits were identified on all chromosomes except for 2D, 3A, 3D, 4D, 5A, and 6B. Using MLM approach, 14 significant markers associated to leaf related traits were found except for the second leaf length (SLL). A summary of the results of MTAs detected using MLM and GLM are given in the table 2 and 3.

Many studies indicated the importance of leaf characteristics such as shape, size, and width of the cereal leaf in relation to yield. A positive correlation between wheat flag leaf and yield was noted by Simon et al. (1999) and Quarrie et al. (2006). Identifying QTLs that control leaf related traits under stressed environment is very useful for marker assisted selection (MAS). However a few studies reported the genetic control of flag leaf and second leaf characteristics. A total of sixty-four QTLs were identified including eleven QTLs for FLA, five for FLL, fourteen for FLW, thirteen for SLA, four for SLL and eleven for SLW. These QTLs were distributed in the wheat genome. Among them, 22 were on genome A (34.3%), 32 on genome B (50%) and 10 on D genome (15.6%). The phenotypic variance explained by each QTL ranged from 8% to 13% for FLA, 8% to 16% for FLL, 8% to 15% for FLW, 8% to 14% for SLA, 8% to 11% for SLL, and 8% to 14% for SLW. QTL co-localization was found for several markers suggesting their pleiotropic effect. The QTL detected on chr.7B controlling FLA has also a pleiotropic effect on FLL, FLW, SLA and SLL. The detected marker IWA7816 on chr. 6D control both FLL and SLA. The QTL located on chr.2D has a significant effect on FLW, SLA and SLW. Previously, several QTLs controlling leaf characteristics were found. The QTL located on the long arm of chr.1A controlling FLL coincide with the QFll.cz-1A.3 (Yaopeng 2015). The co-localization of both QTLs controlling FLA and FLW on chr.1B was also reported by (Qiuhong Wu 2015) by the identification of QFla.cau-1B and QFlw.cau-1B.2. QTL detected on chromosome 2D controlling FLW coincides with QFlw.cau-2 and QFlw.tam-2D(Qiuhong Wu et al. 2015) and (Mason at al. 2011). In this study, QTLs located on chr. 7A and 7B were found to have a pleiotropic on almost leaf traits effect that control FLA, FLL, FLW, SLA, and SLL. This 7B region was only reported by (Qiuhong Wu 2015) by the identification of QFla.cau-7B.2controlling FLA.

In this study, we succeeded to identify several SNP associated markers to flag and second leaf characteristics in bread wheat (Triticum aestivum L.). These findings will be useful for markers assisted breeding of wheat under semi arid climate under drought conditions.

We thank the direction of the PRRDANOSA-ElKEf and the Technical Support Section of INRAT research station for field management and soil preparation.