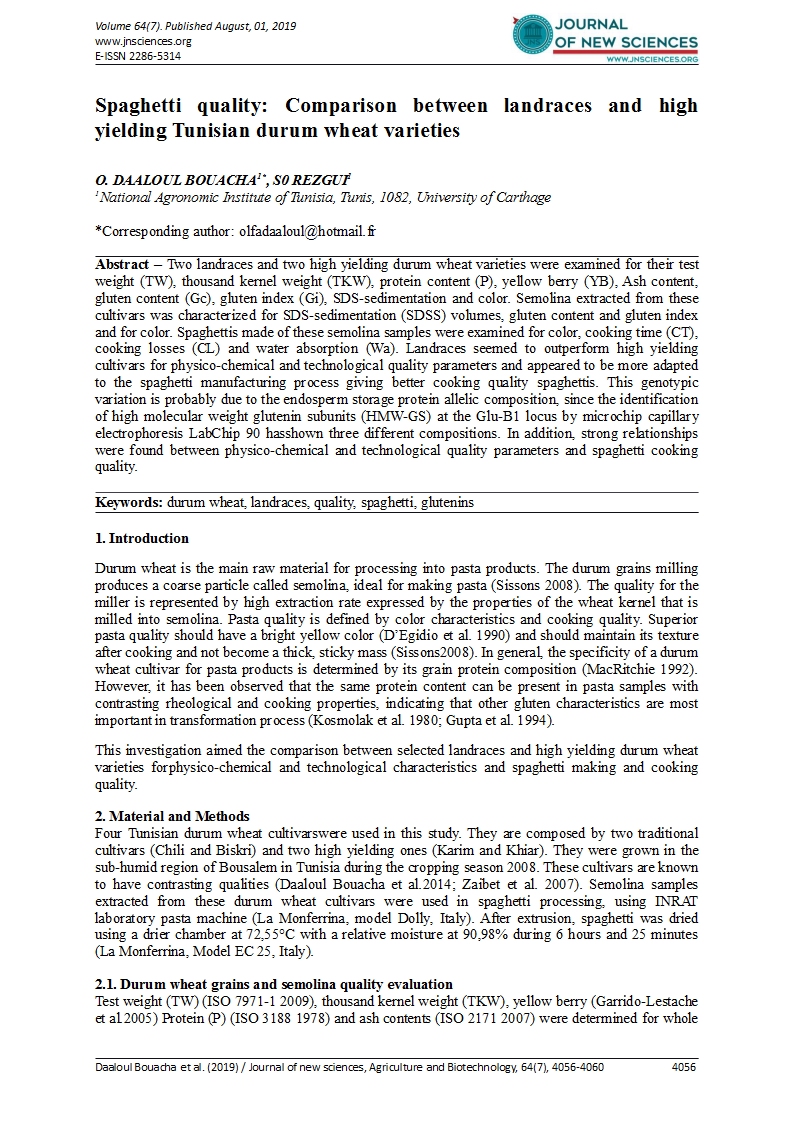 Durum wheat is the main raw material for processing into pasta products. The durum grains milling produces a coarse particle called semolina, ideal for making pasta (Sissons 2008). The quality for the miller is represented by high extraction rate expressed by the properties of the wheat kernel that is milled into semolina. Pasta quality is defined by color characteristics and cooking quality. Superior pasta quality should have a bright yellow color (D’Egidio et al. 1990) and should maintain its texture after cooking and not become a thick, sticky mass (Sissons2008). In general, the specificity of a durum wheat cultivar for pasta products is determined by its grain protein composition (MacRitchie 1992). However, it has been observed that the same protein content can be present in pasta samples with contrasting rheological and cooking properties, indicating that other gluten characteristics are most important in transformation process (Kosmolak et al. 1980; Gupta et al. 1994).

Four Tunisian durum wheat cultivarswere used in this study. They are composed by two traditional cultivars (Chili and Biskri) and two high yielding ones (Karim and Khiar). They were grown in the sub-humid region of Bousalem in Tunisia during the cropping season 2008. These cultivars are known to have contrasting qualities (Daaloul Bouacha et al.2014; Zaibet et al. 2007). Semolina samples extracted from these durum wheat cultivars were used in spaghetti processing, using INRAT laboratory pasta machine (La Monferrina, model Dolly, Italy). After extrusion, spaghetti was dried using a drier chamber at 72,55°C with a relative moisture at 90,98% during 6 hours and 25 minutes (La Monferrina, Model EC 25, Italy).

Statistical methods consisted in analysis of the variance and correlation test of SAS. with LSD-test, proc anova and proc corr. tests.

3.1. Quality characterization of grains, semolina and spaghettis of the four cultivars

ANOVA analysis carried out on grains, semolina and spaghettifrom the four studied cultivars ‘characteristics showed that genotypic effect controlled almost all grain quality characteristics, except for yellow berry. These results are in accordance with many previous studies (Lerner et al. 2006; Li et al.2013); which stipulated that qualitative parameters such as protein and gluten contents were controlled by genotypes, and showed also a significant effect of interaction between genotypes and environments. In addition, genotypes effect was significant for SDSS, yellow index for semolina and for cooking losses percentages and yellow index for spaghetti.

Overall means comparison amongst cultivars for all studied parameters showed that there are two distinguished groups of cultivarsaccording to the protein composition. The traditional ones were characterized with higher levels of protein contents.(Table 1).

Results in Table 2 showed that semolina extracted from cultivar Chili was characterized by SDSS (Sodium dodecyl sulfate sedimentation) volume mean of 5.80 ml similar (p>0.05) to those of cultivars Biskri (5.16 ml) and Khiar (5.95 ml); therefore, it was significantly higher than that of cultivar Karim (3.7 ml). This result could stipulate thatthe first group of cultivars (Biskri and Khiar) presented a higher gluten strength than the former (Karim).Gluten index varied from 40.95 to 65.35 showing an overlapping ranking amongst cultivars.Interestingly, yellow index showed similar values for cultivars Chili and Khiar, significantly higher than those observed for cultivars Biskri and Karim.

Comparison of Spaghetti overall means characteristics amongst cultivars (Table 3), showed that spaghetti made of cultivar Chili showed superiority over spaghettis made of remaining cultivars for the parameter cooking losses with a mean of 4.81% (versus the means of 5.60%, 7.13%, and 7.92%, respectively observed with Biskri, Khiar and Karim).

These results confirmed the difference previously found between landraces and high yielding cultivars in terms of quality parameters (Daaloul et al. 2014). This difference could stipulate thatimprovement over a long period of time could affect negatively grain quality parameters.

The identification of high molecularweight glutenin subunits (HMW-GS) at the Glu-B1 locus bymicrochip capillary electrophoresis LabChip 90 as previously stated (Daaloul Bouacha et al., 2014), showed that Landrace Chilipossessed the 20x-20y HMW-GS;while Biskri showed the 6-8HMW-GS. On the other hand, the highyielding cultivars Karim and Khiar showed the 7-8 subunits. These protein compositions could explain the differences found in the spaghetti’s making quality amongst cultivars, since, Aalami et al. (2007) found a poor cooking quality spaghetti associated with subunits 7-8.

Thousand kernel weight (TKW) could be considered as a good indicator of grains quality since it was significantly (p<0,05) correlated with protein content with Pearson correlation coefficient r =0.78, and the relationship between these two parameters was determined in Figure1.A with R2 =0.61. Then TKW was also strongly correlated with gluten content (r = 0.84). Figure 1.B showed that the association between these two parameters was determined at R2 =0.71. Grain protein and gluten contents showed significant (p<0,05) negative correlations with cooking losses (respectively r = - 0.76 and r = - 0.72). In addition, grain SDSS was strongly correlated with cooking losses (r = -0.86).

A genotypic variation was observed between landraces and high yielding cultivars in grains characteristics and spaghetti’s quality characteristics. This variation is probably explained by the endosperm storage protein allelic composition. In addition, the significant correlations observed amongst SDSS test, protein content and cooking losses percentages of spaghetti, could suppose that gluten strength of cultivars Chili and Biskri was enough for maintaining the structure of the gluten network, translated by a significant reduction of cooking losses of spaghetti, as compared to the high yielding cultivars (Karim and Khiar). These results highlight the importance of storage protein composition identification in the understanding of genotypic variation observed in grains and end-products quality.On the other hand, these results could provide important data for the opportunity to valorize landraces in pasta industries.