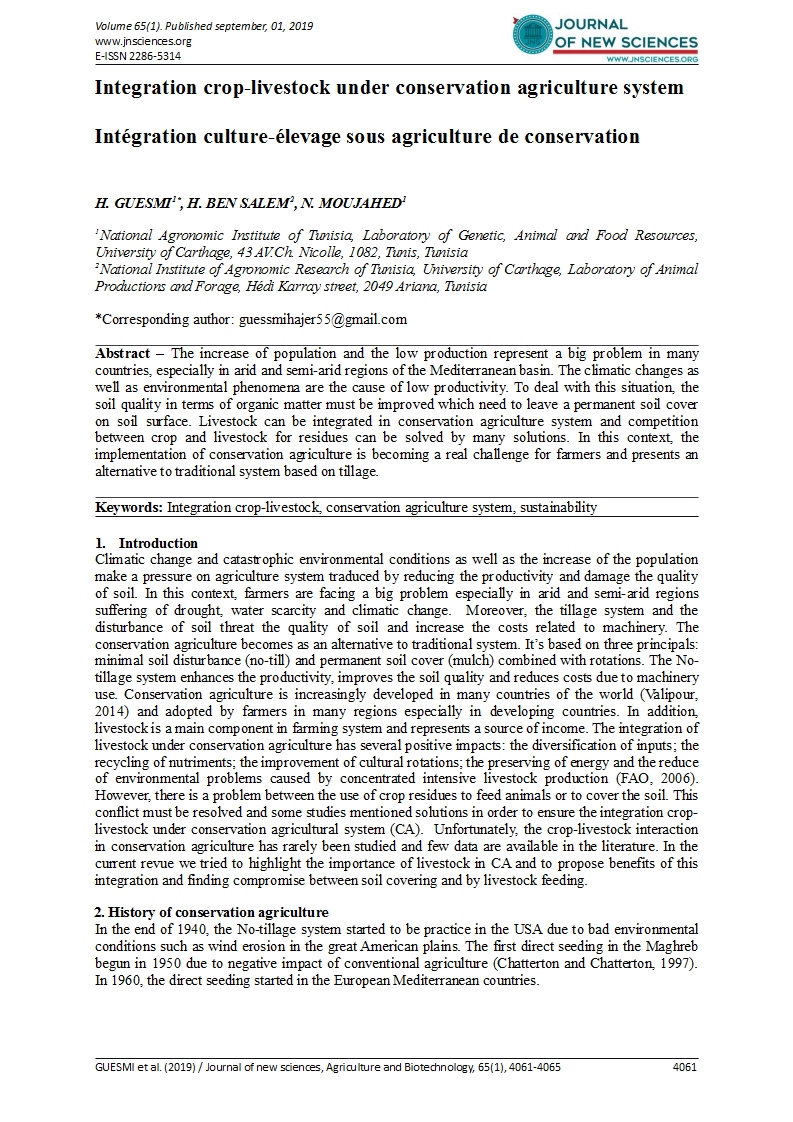 Abstract – The increase of population and the low production represent a big problem in many countries, especially in arid and semi-arid regions of the Mediterranean basin. The climatic changes as well as environmental phenomena are the cause of low productivity. To deal with this situation, the soil quality in terms of organic matter must be improved which need to leave a permanent soil cover on soil surface. Livestock can be integrated in conservation agriculture system and competition between crop and livestock for residues can be solved by many solutions. In this context, the implementation of conservation agriculture is becoming a real challenge for farmers and presents an alternative to traditional system based on tillage.

Climatic change and catastrophic environmental conditions as well as the increase of the population make a pressure on agriculture system traduced by reducing the productivity and damage the quality of soil. In this context, farmers are facing a big problem especially in arid and semi-arid regions suffering of drought, water scarcity and climatic change. Moreover, the tillage system and the disturbance of soil threat the quality of soil and increase the costs related to machinery. The conservation agriculture becomes as an alternative to traditional system. It’s based on three principals: minimal soil disturbance (no-till) and permanent soil cover (mulch) combined with rotations. The No-tillage system enhances the productivity, improves the soil quality and reduces costs due to machinery use. Conservation agriculture is increasingly developed in many countries of the world (Valipour, 2014) and adopted by farmers in many regions especially in developing countries. In addition, livestock is a main component in farming system and represents a source of income. The integration of livestock under conservation agriculture has several positive impacts: the diversification of inputs; the recycling of nutriments; the improvement of cultural rotations; the preserving of energy and the reduce of environmental problems caused by concentrated intensive livestock production (FAO, 2006). However, there is a problem between the use of crop residues to feed animals or to cover the soil. This conflict must be resolved and some studies mentioned solutions in order to ensure the integration crop-livestock under conservation agricultural system (CA). Unfortunately, the crop-livestock interaction in conservation agriculture has rarely been studied and few data are available in the literature. In the current revue we tried to highlight the importance of livestock in CA and to propose benefits of this integration and finding compromise between soil covering and by livestock feeding.

In the end of 1940, the No-tillage system started to be practice in the USA due to bad environmental conditions such as wind erosion in the great American plains. The first direct seeding in the Maghreb begun in 1950 due to negative impact of conventional agriculture (Chatterton and Chatterton, 1997). In 1960, the direct seeding started in the European Mediterranean countries.

3.1. Reducing or suppressing of soil tillage

One of the principals of conservation agriculture is the suppression of tillage in order to ensure a better cohesion between soil aggregates, reduce organic matter mineralization and develop the soil biota. Seeding under cover crop in absence of soil disturbance is regarded as the ideal. However, some farmers reduce tillage especially when they start to adopt the conservation agriculture (Lahmar, 2006).

In Conservation agriculture conditions, the soil should be permanently covered either with previous crop residues (mulch) on soil surface. These cover crops play an important role in improving soil structure against weather aggressions and erosions, keeping the soil moist (Lal, 1997), competing weeds growth and providing habitat and food for organisms (Blanchart et al., 2006). In semi-arid conditions, where biomass production is limited and livestock breeding is relatively abundant, there may be competition between the use of crop residues to cover the soil or to feed animals (Corbeels et al., 2010).

3.3. Crop rotations or associations with leguminous

The alternation between winter and spring crops ensures the disruption of weed cycles and reduces their development. Thus, diversifying and lengthening crop rotations limit weed flora. The adoption monoculture farming promotes the transmission of fungal diseases or the development of some pests. Crop rotation is necessary for the sustainability of conservation farming systems by optimization the management of natural resources and all the factors of production in farms (Scopel, 2012).

Conservation agriculture represented in 2013 a superficies of about 155 M ha (11% of arable cropland) (Kassam et al., 2015). The higher percentage (50%) of CA presented in the North- Western parts of North America and the southern parts of South America. In Europe, the highest superficies are observed especially in Spain and Italy. The development of conservation agriculture still grown in Asia countries mainly dominated by China (6.67 M ha). The African countries have experienced a modest development in CA system. In Tunisia, the No-tillage system has developed to attend 12,000 ha of superficies in 2009-10. The project of CA imply different organizations such as the National Institute for Agronomic Research of Tunisia (INRAT), the National Institute for Field Crops (INGC), the International Center for Agricultural Research in the Dry Areas (ICARDA) and the International Maize and Wheat Improvement Center (CIMMYT). 15 Sub-Saharan countries are adopting CA (Kenya, Uganda, Tanzania, Sudan, Swaziland, Lesotho, Malawi, Madagascar, Mozambique, South Africa, Namibia, Zambia, Zimbabwe, Ghana and Burkina Faso). Due to the high costs and climatic change, the no tillage system represents an essential step of agricultural development in African countries (Kassam et al., 2015).

5. Interaction between crop and livestock under conservation agriculture

The integration of livestock under conservation agriculture is becoming a worry for farmers in terms of how percentage of residues must be left on soil surface to ensure this integration. In this context, Köller (2003) mentioned that 30% of mulch must be left on soil to integrate livestock into conservation agriculture system. The development of population, the bad environmental conditions, the climatic change, and the high costs of machinery in conventional agriculture system influence the productivity and encourage farmers to find an alternative to tillage system. In this context, the conservation agriculture represents a revolution in agriculture. To satisfy the population requirements, livestock represents an essential component of agriculture system especially in arid and semi-arid countries. Ryschawy (2012) affirmed that the sustainability of agriculture is insured by the interaction between crop and livestock. Bashour et al. (2016) reported that this integration is based on how residues quantity must leave on soil surface. Calatrava and Franco (2011) noticed that the crop-livestock interaction in conservation agriculture system has rarely been studied and few data are available in the literature. Mulch is used as animal fodder, to enhance soil quality and to increase biomass yield (Fassino and Maire, 2012). Cover crop improves animals’ performances thanks to its high levels of nutrients which satisfy the requirements of animals. Lander (2007) mentioned that integration livestock into conservation agriculture system participates to diversify farmers’ incomes and reduces the costs of machinery used in conventional system. The No-tillage decreases the phenomena of erosion and controls the weeds (Sanchez, 1995). Fassino and Maire (2012) indicated that animals benefit from direct seeding through producing forage which contributes to crop fertilization by producing organic matter. The moving of animals allows the transfer of minerals and organic matter between plots. Also, the integration of crop-livestock may improve the economic stability of farmers and could capitalize and make them less dependent on the socio-economic environment (Escribano, 2006).

A major problem of integration of livestock into conservation agriculture system is consisting on if the residual biomass is used to feed animals or to cover the soil and this represents a constraint for livestock (Abbas and Zitouni, 2011). This paradox influences the feed resources for animals. The concept of integration crop-livestock into conservation agriculture represents a constraint for the adoption of conservation agriculture techniques in regions where livestock is considered as a main component. However, the competition between crop and livestock under no-tillage system must be managed to be compatible with the conservation agriculture practice (Landers 2007) by optimizing the grazing. Abbas and Zitouni (2011) suggested certain solutions to solve the problem of competition between livestock and the cover crop. They proposed solutions such as: The evaluation of the number of residues needed for soil protection and the valorization of the remaining quantity that can be used for livestock feed, the insertion of cover crops that can be used to protect the soil and the livestock feed as a part of the crop rotation plan. Furthermore, decreasing the herd size by transhumance presents an important solution in the context of CA. The respect of stocking rate capacity prevents overgrazing and ensures a good permanent soil cover. The herd’s size must be well studied by considering the availability of forage and the capacity to produce it. In this context, Moujahed et al.(2015) reported that livestock can be fully integrated into conservation agriculture and animals conserved their body weight. They studied the effect of stocking rates and period (SR15 and SR30) on Live Weight Gain (LWG) (Figure 2a) and Daily Live Weight Gain (DLWG) (Figure 2b) of lambs under conservation agriculture conditions. They found that animals lost their live weight (P<0.001) which is higher (P<0.05) in SR15 than in SR30 group (-610 and -110 g, respectively). The same trend was observed also in DLWG (23.3 and -4.1 g/d, respectively for SR15 and SR30, P<0.05). In the second period (15 days after), lambs for both stocking rates registered a positive DLWG (around 171g/d) resulting in an increase in LW (around 2kg). In the last period (30 days after the beginning of the experiment), SR15 group maintained their body weight. The SR30 group registered a decrease by about 400g in LW compared to the second period. Authors mentioned that the loss of body weight at the beginning of the experiment can be explained by this adaptation period in which lambs select heads and grains causing some digestive disturbances for animals. The increase in animals’ body weight in the second period confirmed that biomass was not limiting and satisfy all nutrient requirements of lambs and contributed to safeguard livestock even in absence of supplementation. The same results were found by Treacher et al. (1996).

In this context, Masmoudi (2012) showed that the integration of livestock at different levels of stocking rates requires a rate of biomass cover higher than 78% before grazing (Figure 3). However, the adoption of No-tillage system still relatively lower especially in Africa where farmers need some encouragements from extension services to more adopt CA by providing subventions and vulgarization sessions about this new concept.

The adoption of conservation agriculture is becoming a big challenge actually. The integration crop-livestock under CA system ensures the sustainability of agriculture. Indeed, the permanent soil cover enhances the soil quality, maintains the soil fertility, and eliminates the risks of erosion. Also, animals enhance the soil quality by giving organic matter. In the other part, the residues improve animals’ performances especially in arid and semi-arid regions suffering from climatic change and where livestock presents a main component in the farming system. Indeed, several studies mentioned that biomass satisfies all nutritional needs of animals and livestock can be fully integrated into conservation agricultural system.

This study is part of the IFAD/ICARDA, CLCA I Project. We are grateful to the CLCA I project for all the scientific resources that we have received in order to enrich our manuscript.