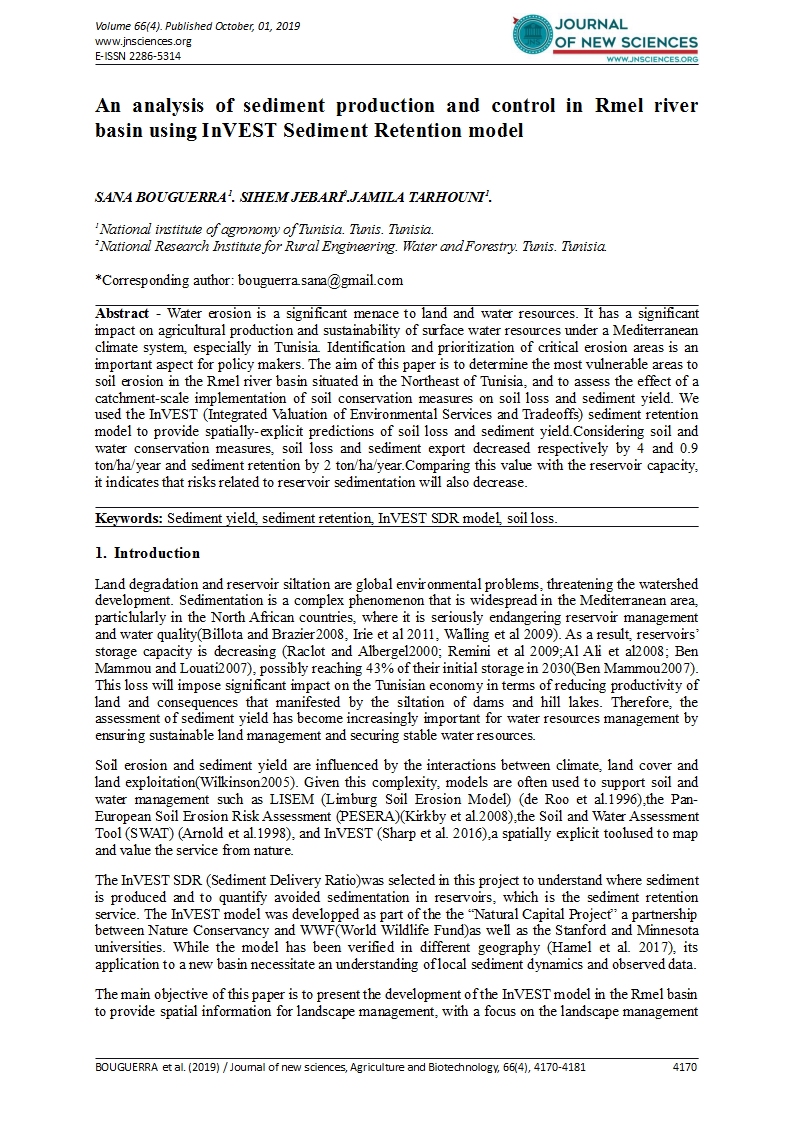 Abstract - Water erosion is a significant menace to land and water resources. It has a significant impact on agricultural production and sustainability of surface water resources under a Mediterranean climate system, especially in Tunisia. Identification and prioritization of critical erosion areas is an important aspect for policy makers. The aim of this paper is to determine the most vulnerable areas to soil erosion in the Rmel river basin situated in the Northeast of Tunisia, and to assess the effect of a catchment-scale implementation of soil conservation measures on soil loss and sediment yield. We used the InVEST (Integrated Valuation of Environmental Services and Tradeoffs) sediment retention model to provide spatially-explicit predictions of soil loss and sediment yield.Considering soil and water conservation measures, soil loss and sediment export decreased respectively by 4 and 0.9 ton/ha/year and sediment retention by 2 ton/ha/year.Comparing this value with the reservoir capacity, it indicates that risks related to reservoir sedimentation will also decrease.

Land degradation and reservoir siltation are global environmental problems, threatening the watershed development. Sedimentation is a complex phenomenon that is widespread in the Mediterranean area, particlularly in the North African countries, where it is seriously endangering reservoir management and water quality(Billota and Brazier2008, Irie et al 2011, Walling et al 2009). As a result, reservoirs’ storage capacity is decreasing (Raclot and Albergel2000; Remini et al 2009;Al Ali et al2008; Ben Mammou and Louati2007), possibly reaching 43% of their initial storage in 2030(Ben Mammou2007). This loss will impose significant impact on the Tunisian economy in terms of reducing productivity of land and consequences that manifested by the siltation of dams and hill lakes. Therefore, the assessment of sediment yield has become increasingly important for water resources management by ensuring sustainable land management and securing stable water resources.

The InVEST SDR (Sediment Delivery Ratio)was selected in this project to understand where sediment is produced and to quantify avoided sedimentation in reservoirs, which is the sediment retention service. The InVEST model was developped as part of the the “Natural Capital Project” a partnership between Nature Conservancy and WWF(World Wildlife Fund)as well as the Stanford and Minnesota universities. While the model has been verified in different geography (Hamel et al. 2017), its application to a new basin necessitate an understanding of local sediment dynamics and observed data.

The main objective of this paper is to present the development of the InVEST model in the Rmel basin to provide spatial information for landscape management, with a focus on the landscape management scenario proposed by local stakeholders. Our analyses include calibration and verification of the model with lake sedimentation data, thereby contributing to the growing body of literature on sediment delivery modeling with simple models like InVEST.

The Rmel river basin is situated in the northeastern part of Tunisia, within a semiarid environment (Figure 1). The average rainfall is ranged between 350 and 600mm. Figure 2 shows annual rainfall variability of the Zaghouan DRE station. The main river is wadiRmel; this river flows southeastward and has nine tributaries. The Oued Rmel dischargeddirectly into the Mediterranean Sea before the construction of the Oued Rmel dam in 1996, which created an artificial reservoir with an area of 5 km2. The area of the catchment is 640 km2. It mainly belongs to the governorate of Zaghouan, with a small portion located in the governorates of Nabeul and Ben Arous. The study area is characterized by a central plain surrounded by mountains in the North East and in the South West. The Djebel Zaghouan is the highest point with an altitude of 1293 m(Jebari et al.2016).Human interventions in this area are numerous. Land cover changes have included deforestation, in order to increase the cultivated land for agricultural purposes (PDAI 2014). In addition, some land cover changes are caused by urban areas expansion occupying fertile soils. Most of the land cover is nowcropland. Cereals are dominant and cover a large portion of the agricultural area. Natural vegetation covers approximately 30% of the area, mainly made of scrublands and natural forest. It is mainly located on mountaintops. Figure 3a,b presents maps of LULC and different soil type of the study area.The Rmel reservoir is the main surface resource in the basin.

This reservoir has an important hydrological value since it constitutes a source of irrigation of a large perimeter of the downstream plain of Bouficha. Therefore, it contributes to economic development of the country through the development of agricultural activities and the creation of jobs. It also plays a role in flood control for the downstream urban areas.In addition to the Rmel reservoir, the study area comprises 22 hill lakes, with a watershed area ranging from ten hectares to a few hundreds of hectares. Hill lakes occupy an important place in national strategies in term of water and soil conservation. In this region, lakes represent a significant source of water for agriculture, which is the dominant economic activity in the region. Sedimentation threatens the sustainability of lakes to mobilize surface water. Storage capacity of lakes was reduced by about 50% between 1991 and 2012. Furthermore, six lakes are totally covered by silt (DGA/ACTA 2015)

Where R is the rainfall erosivity (MJ. mm (h.hr)-1, K is the soil erodibility, LS the slope length gradient factor, C is the cover management factor and P is the support practice factor.

The role of the R factor is to characterize the erosive force of precipitation on the ground. It considers the regional differences of the climate according to the type, the intensity (I15) of the precipitation. This duration (I15) was found representative regarding to erosion process in Tunisian semi-arid catchments (Jebari et al. 2008). The erosivity of rain is expressed according to the following equation:

Where Imax is the maximum intensity (mm/h)

In our study site, there is only one rainfall station with intensity data (station sbahia). We then assumed that the erosivity is uniform throughout the basin. Erosive rainfall records was analyzed during the period (1993-2001).

The outputs of the SDR model include the sediment exported to the stream, the amount of sediment eroded in the catchment, and the sediment retained by vegetation, management practices and topographic features. In the Rmel watershed, we applied the InVEST sediment Delivery Ratio to estimate the amount of soil loss, sediment export, and the reduction in sediment export that could be brought by conservation actions. The model uses an hypothetical scenario where all landcover is cleared to a bare soil. Then, the value of sediment retained by the landscape is based on the difference between the sediment export from this bare soil catchment and that of the scenario (Sharp et al. 2016). Our main objective is the identification of most sensitive areas (in terms of sediment production) inside this region to focus restoration efforts.Rainfall erosivity was calculated based on rainfall intensity data available in the Sbaihia station. The K-factor is an estimation of soil erodibility as a function of soil development and horizon texture, organic matter, and permeability. We adopted a value of K erodibility factor of soil for each unit of the watershed, from the soil map of the governorate of Zaghouan, Ben Arous, Sousse and Nabeul (Table1). Actually, the C factor values were reconsidered based on specific publications. They were mentioned in several articles among which: Bouguerra et al (2017) as well as in Meghraoui et al (2017) and Zante et collinet (2001). The values considered within our work are as follow:

The practice P-factor is the water and soil conservation practices or measures that reduce the amount of runoff and control the erosion. At the Rmel river basin, measures used are only terraces. P-factor values depend on the type of management and slope. We set P-factors to a value of 0.1 for terraces with slopes ranged from 0 to 5%, 0.12 with slopes from 5 to 15%, 0.16 with slopes 15 to 25% and 0.18 with a slopes 25 to 35% (Zante and Collinet 2001). We extracted slopes of areas with conservation practices. We attribute a factor for each slope. Then these practices were combined to landuse/landcover classes. From this combinaison, we extracted a biophysical table. The variables in the table include the cover management factor C and the support practice factor P values from the USLE model. It takes into account a user defined threshold accumulation number, which is a number of upstream pixel cells that must flow into a cell before it counts as a part of the stream network. We used the default threshold flow accumulation of 1000 pixels since it resulted in a stream network that matched observations (Tallis et al. 2014). Inputs data requirement a of the model for the SDR model are given in Table 3.

We used a 30 m resolution DEM burned and filled using Archydro toolbox for GIS. We used the National Land cover Dataset 2004 which has 14 land cover classes at 30m resolution.

The R-factor is a climatic indication that estimates the kinetic energy of rainfall at the maximum 30 min intensity. Jebari et al (2008) have demonstrated that the 15 min duration is the most representative erosive rainfall in the semi-arid region of Tunisia. From the rainfall data available in the Sbaihia station, we calculated the values of the R factor for each storm. We used rainfall intensity (I15max) data over the observation period of 9 years (1994-2003)(Bouguerra et al. 2017).

We model sedimentation in lakes. Then, the model was ran and calibrated considering that sediment retained in upstream lakes do not contribute to downstream sediment export. So, the estimate for the Rmel reservoir is the quantity of sediment that really reaches the downstream. The estimates for the Rmel river basin is the average amount of sediment that reaches both lakes and reservoir.

We calculated the difference between predicted and observed value. The calibration factor was the kb parameter (Vigiak et al. 2012). We selected the kb that minimizes error between predictions andobservations.

In this section, we consider the impact of soil and water conservation techniques. Actually, these interventions are based in studies conducted by the development sector. Moreover, they were identified via concertation with local population during the EU BeWater Project (RBAP, 2016). We consider water and soil conservation techniques as one of the management options. This option aims to harvest runoff water. These techniques are situated on cultivated lands. Prioritization areas were chosen based on the sensitivity to soil erosion. Table 5 summarizes the different techniques and their correspondent area.

The correlation between predicted and observed values was high.The value of r2 is high (r2=0.84) (Figure 5).

To evaluate the extent to which kbvaried spatially.The model was calibrated for individual sub-catchments. The kb parameter varies with 0.5 increments for the 11 sub-catchments. Results show a large variability in values, ranging from 1.6 to 3.3 (Figure 6).

Studying sediment exports is important to inform land management decisions, in particular spatial prioritization for land management activities. There are six hill lakes in the Rmel river basin that werealready completely filled with silt. Their average life span is about 20 years, which is below the initial forecasts of hydraulic installation projects.

Table 6 reveals that the mean annual sediment yield for all sub-catchments was 26.87 ton/ha/year. Results demonstrate that the sub-catchment Jlass is the largest contributor to sediment yield with a value of 55 ton/ha/year. However, the Rmel river reservoir presents a low sedimentation with an average of 2.64 ton/ha/year. This can be explained by two facts. The first is that the large parts of sediments are caught by the lakes situated on the upstream reservoir. The second is that the main river Rmel in the basin of about 46 km length has remarkable steady slopes of 3% all along its course, presuming an equilibrium situation.