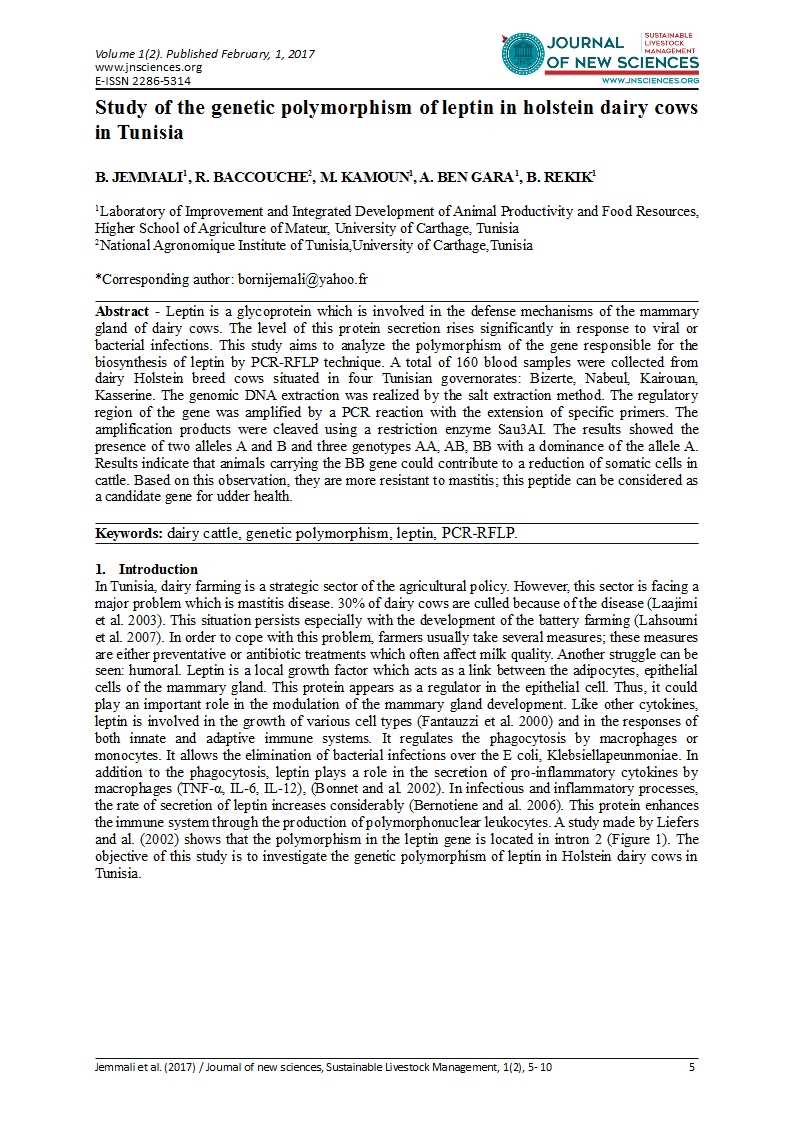 1Laboratory of Improvement and Integrated Development of Animal Productivity and Food Resources, Higher School of Agriculture of Mateur, University of Carthage, Tunisia

Abstract - Leptin is a glycoprotein which is involved in the defense mechanisms of the mammary gland of dairy cows. The level of this protein secretion rises significantly in response to viral or bacterial infections. This study aims to analyze the polymorphism of the gene responsible for the biosynthesis of leptin by PCR-RFLP technique. A total of 160 blood samples were collected from dairy Holstein breed cows situated in four Tunisian governorates: Bizerte, Nabeul, Kairouan, Kasserine. The genomic DNA extraction was realized by the salt extraction method. The regulatory region of the gene was amplified by a PCR reaction with the extension of specific primers. The amplification products were cleaved using a restriction enzyme Sau3AI. The results showed the presence of two alleles A and B and three genotypes AA, AB, BB with a dominance of the allele A. Results indicate that animals carrying the BB gene could contribute to a reduction of somatic cells in cattle. Based on this observation, they are more resistant to mastitis; this peptide can be considered as a candidate gene for udder health.

In Tunisia, dairy farming is a strategic sector of the agricultural policy. However, this sector is facing a major problem which is mastitis disease. 30% of dairy cows are culled because of the disease (Laajimi et al. 2003). This situation persists especially with the development of the battery farming (Lahsoumi et al. 2007). In order to cope with this problem, farmers usually take several measures; these measures are either preventative or antibiotic treatments which often affect milk quality. Another struggle can be seen: humoral. Leptin is a local growth factor which acts as a link between the adipocytes, epithelial cells of the mammary gland. This protein appears as a regulator in the epithelial cell. Thus, it could play an important role in the modulation of the mammary gland development. Like other cytokines, leptin is involved in the growth of various cell types (Fantauzzi et al. 2000) and in the responses of both innate and adaptive immune systems. It regulates the phagocytosis by macrophages or monocytes. It allows the elimination of bacterial infections over the E coli, Klebsiellapeunmoniae. In addition to the phagocytosis, leptin plays a role in the secretion of pro-inflammatory cytokines by macrophages (TNF-α, IL-6, IL-12), (Bonnet and al. 2002). In infectious and inflammatory processes, the rate of secretion of leptin increases considerably (Bernotiene and al. 2006). This protein enhances the immune system through the production of polymorphonuclear leukocytes. A study made by Liefers and al. (2002) shows that the polymorphism in the leptin gene is located in intron 2 (Figure 1). The objective of this study is to investigate the genetic polymorphism of leptin in Holstein dairy cows in Tunisia.

A total of 160 blood samples were taken from the jugular vein of Holstein dairy cows. Subjects were randomly taken from four geographically separated farms and all belong to the State Lands Office (OTD), these farms belong to four different governorates: Nabeul, Kairouan, Bizerte, Kasserine (Table 1). Blood quantity collected is 5 ml, the blood was placed in evacuated tubes containing K3EDTA and stored at -20 ° C for the genomic DNA extraction.

The method for the extraction of genomic DNA is the one developed by Sambrook et al. (1989) based on the saline extraction.

The estimation of the DNA amount was made using the optical density measure at a wavelength of 260 nm with a spectrophotometer. As for the verification of the quality of DNA, it was performed by electrophoresis on agarose gel [0.8% (W / V)].

This step allows us to have equal concentrations of DNA. The protocol followed during dilution is the protocol of Jemmali et al. (2013). The final chosen concentration is 50 ng/µl.

The lyophilized primers (Invitrogen) were dissolved in dilution buffer to give a final concentration of 100 pmol /µl.

The reaction mixture consists of two primers, dNTPs, MgCl2, H2O, Taq polymerase and buffer. PCR is performed with a final volume of 25μl. Reagents of the amplification solution are presented in Table 3.

After some tests, a suitable hybridization temperature was found. The initial denaturation was performed for 5 min at 95 ° C. 39 amplification cycles, each cycle consists of denaturation for 30s at 95 ° C, followed by primer annealing for 30 s at 61.5 ° C, elongation for 45s at 72 ° C, and then a final extension for 10min at 72 ° C.

The specificity and the performance of an amplification reaction are verified by migration on a 2% agarose gel with a voltage of 120 volts during 60min.

After amplification, 8μl of the PCR product were digested by the enzyme in a reaction volume of 25µl. The reagents of the enzyme solution and their concentrations are described in Table 4.

This step is crucial, it is done by a migration on a 2% agarose gel. The power voltage is 70 volts during 40min. 12μl digestion product were placed in each well. Each series typically includes an undigested PCR product made in the first well. As for the last well it contains the size marker in order to know the size of the digested products.

2 alleles: A1, A2 autosomal codominant

The total number of A1 and A2 allele in a population of diploid N is 2N.

Fragments containing the gene coding for the leptin were amplified by the PCR technique. The optimization of the PCR reaction has concerned parameters related to the quantity of DNA, Taq polymerase and the quantity of MgCl2.

The thermal program was modified slightly which showed a much improved efficiency of the amplification. Proving that, the optimum temperature at which the amplification profiles are clearer is 61.5 ° C.

The amplification results of genomic DNA were positive for all tested cows, which show the existence of the coding sequence for leptin. Indeed, the electrophoretic analysis of PCR amplification products generated bands of 422 bp in individuals analyzed. These results are similar to studies which allows the use of this protocol as a standard. Figure (2) shows the profile of the bands generated after PCR amplification using appropriate primers delimiting the coding sequence for leptin.

The variation in the restriction profile shows the existence of a mutation, which is similar to the result found by Trakovicka and al. (2012) and suggests that the polymorphism of the gene coding for leptin is under the effect of a substitution mutation at position 1180 (C:T).

Table 5 shows the frequencies and sizes of alleles of different populations. At the locus of the gene coding for leptin louse which has two alleles (A / B), the dominance of the A allele is quite remarkable and its frequency is 0.677. The results correspond to those obtained by Buchanan and al. (2003) and Hanna and al. (2010).

Buchanan and al. (2003) and Hanna et al. (2010) showed significant associations between the polymorphism of the gene encoding the leptin and somatic cells. BB genotype animals might contribute to a low concentration of somatic cells, compared to other animals with AB and AA genotypes.

The results obtained in this work show that all individuals have the sequence of the gene coding for leptin. The polymorphism of the gene encoding the leptin is under the effect of a substitution mutation at position 1180 (C:T).

It should be noted that changes in the restriction pattern of the gene encoding leptin were observed, and this variability is due to a mutation that could lead to changes in the expression of the gene coding for leptin. The leptin receptors are expressed in a variety of cells and tissues, including those of the immune system. This facilitates the adjustment of phagocytes’ cells.

Several studies have reported the highest circulating leptin in infectious and inflammatory processes of the mammary gland. The results indicate that selection for animals with BB genotype, could contribute to a reduction of somatic cells in cattle. And therefore, they are more resistant to mastitis, this peptide can be considered as a candidate gene for the health of the udder.