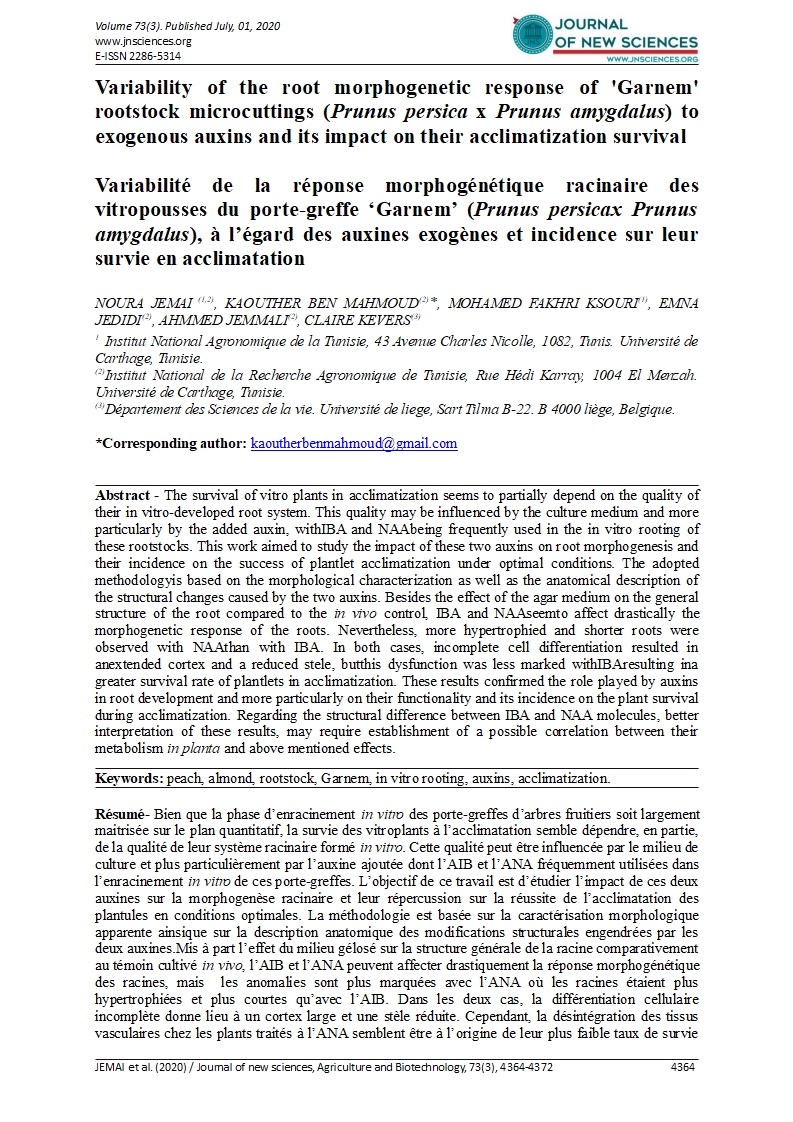 Abstract - The survival of vitro plants in acclimatization seems to partially depend on the quality of their in vitro-developed root system. This quality may be influenced by the culture medium and more particularly by the added auxin, withIBA and NAAbeing frequently used in the in vitro rooting of these rootstocks. This work aimed to study the impact of these two auxins on root morphogenesis and their incidence on the success of plantlet acclimatization under optimal conditions. The adopted methodologyis based on the morphological characterization as well as the anatomical description of the structural changes caused by the two auxins. Besides the effect of the agar medium on the general structure of the root compared to the in vivo control, IBA and NAAseemto affect drastically the morphogenetic response of the roots. Nevertheless, more hypertrophied and shorter roots were observed with NAAthan with IBA. In both cases, incomplete cell differentiation resulted in anextended cortex and a reduced stele, butthis dysfunction was less marked withIBAresulting ina greater survival rate of plantlets in acclimatization. These results confirmed the role played by auxins in root development and more particularly on their functionality and its incidence on the plant survival during acclimatization. Regarding the structural difference between IBA and NAA molecules, better interpretation of these results, may require establishment of a possible correlation between their metabolism in planta and above mentioned effects. 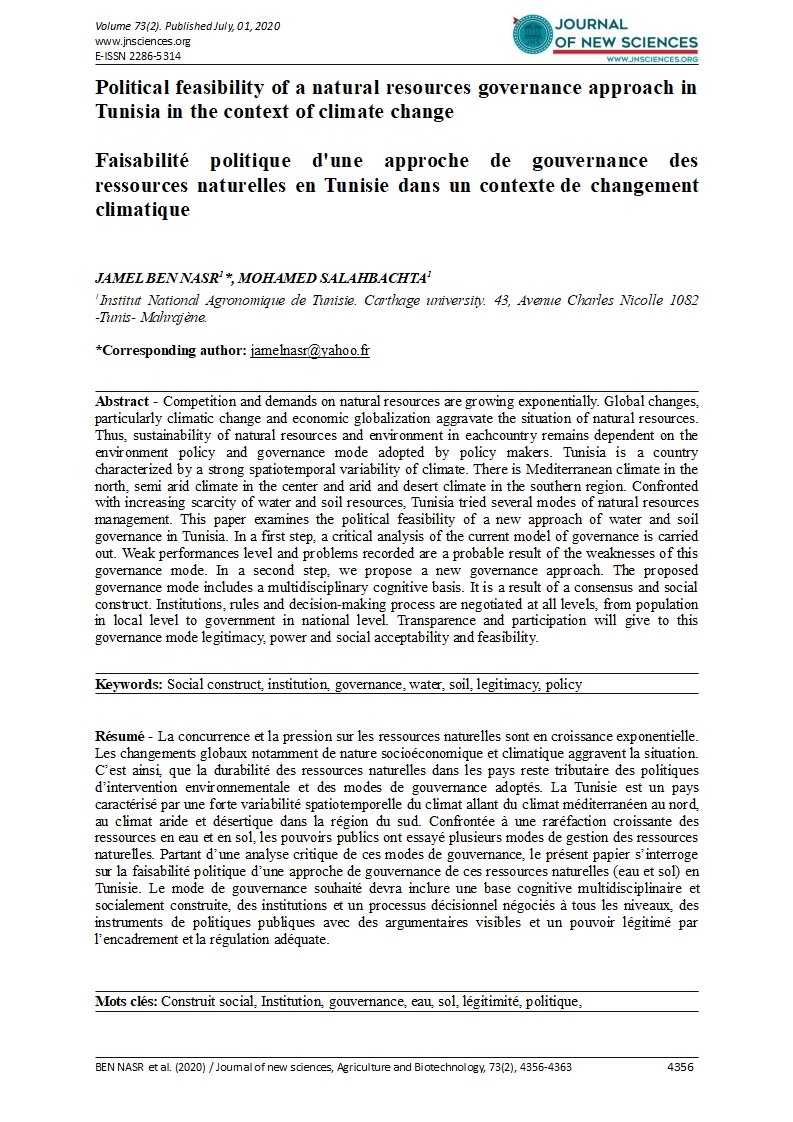 Abstract - Competition and demands on natural resources are growing exponentially. Global changes, particularly climatic change and economic globalization aggravate the situation of natural resources. Thus, sustainability of natural resources and environment in eachcountry remains dependent on the environment policy and governance mode adopted by policy makers. Tunisia is a country characterized by a strong spatiotemporal variability of climate. There is Mediterranean climate in the north, semi arid climate in the center and arid and desert climate in the southern region. Confronted with increasing scarcity of water and soil resources, Tunisia tried several modes of natural resources management. This paper examines the political feasibility of a new approach of water and soil governance in Tunisia. In a first step, a critical analysis of the current model of governance is carried out. Weak performances level and problems recorded are a probable result of the weaknesses of this governance mode. In a second step, we propose a new governance approach. The proposed governance mode includes a multidisciplinary cognitive basis. It is a result of a consensus and social construct. Institutions, rules and decision-making process are negotiated at all levels, from population in local level to government in national level. Transparence and participation will give to this governance mode legitimacy, power and social acceptability and feasibility. 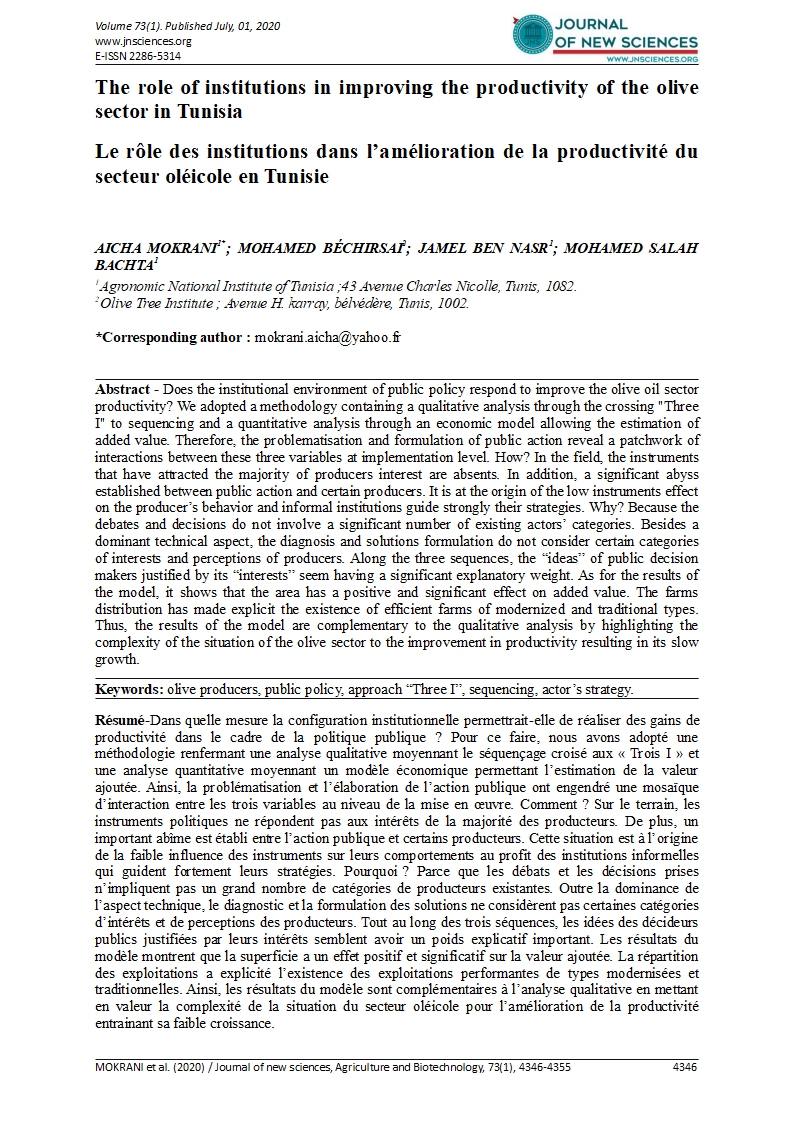 Abstract - Does the institutional environment of public policy respond to improve the olive oil sector productivity? We adopted a methodology containing a qualitative analysis through the crossing "Three I" to sequencing and a quantitative analysis through an economic model allowing the estimation of added value. Therefore, the problematisation and formulation of public action reveal a patchwork of interactions between these three variables at implementation level. How? In the field, the instruments that have attracted the majority of producers interest are absents. In addition, a significant abyss established between public action and certain producers. It is at the origin of the low instruments effect on the producer’s behavior and informal institutions guide strongly their strategies. Why? Because the debates and decisions do not involve a significant number of existing actors’ categories. Besides a dominant technical aspect, the diagnosis and solutions formulation do not consider certain categories of interests and perceptions of producers. Along the three sequences, the “ideas” of public decision makers justified by its “interests” seem having a significant explanatory weight. As for the results of the model, it shows that the area has a positive and significant effect on added value. The farms distribution has made explicit the existence of efficient farms of modernized and traditional types. Thus, the results of the model are complementary to the qualitative analysis by highlighting the complexity of the situation of the olive sector to the improvement in productivity resulting in its slow growth.