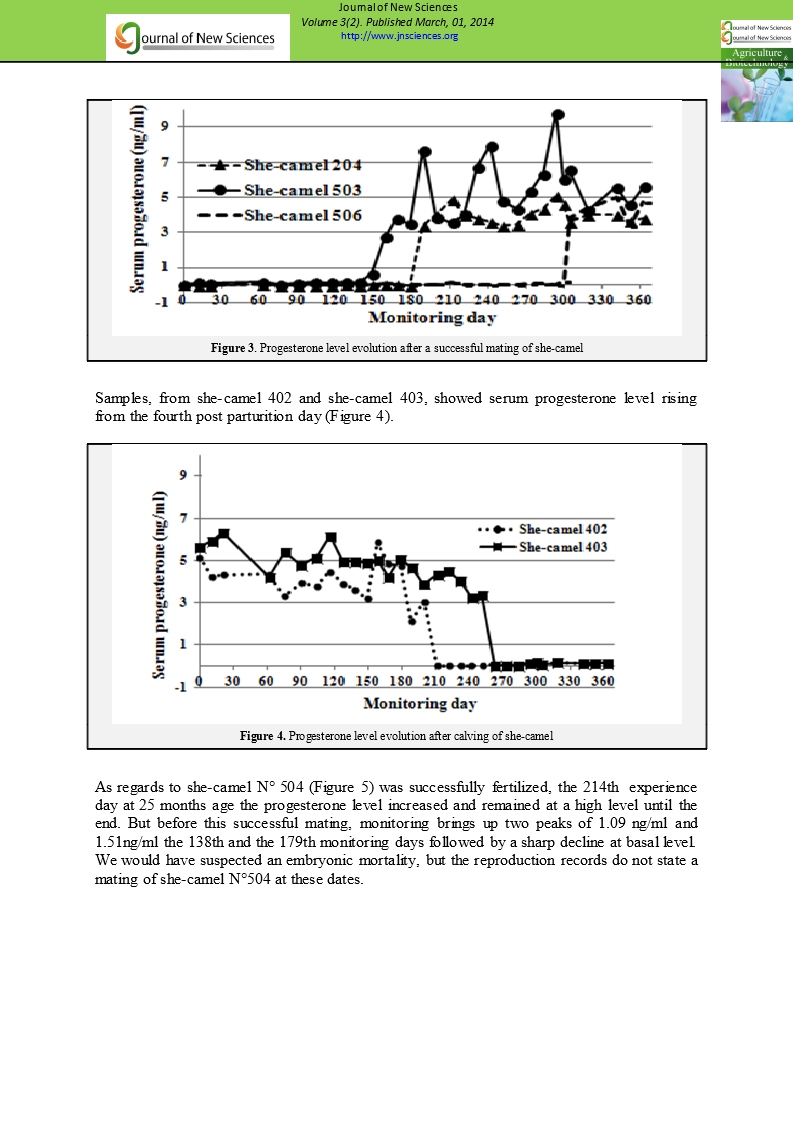 The level of fertility in domestic animals results from a number of interacting factors, some of which have a genetic basis while others are environmental in origin. The systems reproductive physiology of some animals has attracted considerable studies, although certain aspects of reproductive performance for males and females, especially fertility, are inadequately understood. For camel, it is known that the female is an induced ovulation. Adult camel male is characterized by an intermediate penis type, between the vascular and fibrous types. Generally, dromedaries give one calf per birth (Kamoun and Wilson, 1994; Tibary et al., 1997; Nikjou et al., 2008). The reproductive physiology of camel has been incompletely characterized. Most literature describe general characteristic such as occurrence, growth, maturation, diets and pregnancy rate (Hammadi et al., 2001; Ayoub et al., 2003; Deen, 2008; Babiker et al. 2011; Kamoun and Jemmali, 2012 ). The dromedaries’ reproductive efficiency is generally characterized that low under natural conditions. The short breeding season, the long prepubertal period, the long gestation period, the prolonged period of lactation (anestrous of 8–10 months) and the long inter-calving interval are the principal causes for these low performances. (Babiker et al., 2011; Kamoun and Jemmali, 2012).

FAO statistics (2004), reported that the number of camel in world was about 19 million, this number was founded essentially in Africa and Asia with 15 million and 4 million respectively. African populations represent 79% of world camels. All of these animals were one humped and are concentrated in Nord-East of Africa. In Egypt, their numbers were previously estimated as 230.000 camels. In Tunisia, there are about 100.000 camels (Camelus dromedarius). This estimated number was distributed especially in southern and center of Tunisia (figure 1). Despite this important number, there is a little information on genetic diversity of this population and no clear classification for camels exists.

Camel known as a beast of burden in the desert is presently being transformed into a multi-utility animal providing draft power, patrolling international borders, production of commodities like hair, meat and milk. Study of low fertility level of camel can be a way to improve reproductive performances for this animal. The objective of this study is to estimate the serum progesterone level according to physiological status of Maghrabi She-camels.

These studies were undertaken at the experimental satation of the High School of Agriculture at Mateur (37°02’50”N, 09°37’22”E) in northern Tunisia. Mateur is situated 60 km north-west of Tunis, is a few meters above sea level, and has a typically Mediterranean climate characterized by a hot dry sum mer and a mild moist winter. Average rainfall is about 450 mm, 65% of which falls in October-February. Highest monthly maximum temperatures of 32.3°C occur in July, with a lowest maximum of 14.3°C in January. Lowest monthly minimum temperatures of 6.0°C occur in January with the highest monthly minimum of 19.1°C in August.

A total of 13 females and one fertile male camel (camelus dromedarius) were used in this experiment to study the variation of serum progesterone level. All animals are of Maghrabi breed, born and raised in the experimental station (Table 1).

Blood samples (10 ml) were collected individually from the jugular vein of all animals in the experiment morning before feeding every 10 days. Blood samples were placed on ice during collection and stored at + 4 °C for 6 hours in refrigerator, then serum was separated by centrifugation at 3000 rpm for 20 minutes and stored frozen at - 20 °C till analysis. Samples collected in August were badly frozen and lost for analysis, thus the progesterone was determined in three hundred sixty-four sample of blood serum taken from thirteen non-pregnant, early, mid, and late pregnant, as well as Pre-Pubertal she-camels, at regular intervals throughout one year.

Progesterone assay was performed using kits supplied by the Joint FAO/IAEA through the CRP D31017 titled "INTER-REGIONAL RESEARCH NETWORK FOR IMPROVING THE PRODUCTIVITY OF CAMELIDS". The sensitivity of this method was 0.09 ng/mL and the inter- and intra-assay coefficients of variation were 9.2 and 11.0%, respectively.

The means procedure in SAS (Version 9.1; SAS Institute, 2003) was used to determinate average serum progesterone level for each category. The multiple linear regression models was used to estimate difference if exist between level progesterone by category. The GLM procedure was used for statistical analysis. Differences in serum concentrations of progesterone were examined between she-camel females the by General Linear Model (GLM) procedures of the SAS. The effect of a probability value of 0.05 was used as an indicator of statistical significance among comparisons.

The serum progesterone level was determined in three hundred sixty-four blood sample. Serum progesterone level mean detected according female physiological status was summarized in Tables 2 and 3. In total, 190 samples to different physiological stages of 13 empty females (Table 2), young (pre-pubertal and pubertal) but also older in postpartum period (lactating or dry), that the progesterone is undetectable in 9% of samples, these negatives assays coincides with postpartum periods. The empty postpartum camels have plasma progesterone concentrations varying between 0 ng/ml and 0.41 ng/ml and means varying from zero to 0.38±0.04. Serum progesterone concentrations of the empty postpartum camels were varying between 0 ng / ml and 0.41 ng / ml with an average of 0.38±0.04. Lactating status have a significant effect on serum progesterone level. Considered separately the mean plasma progesterone of five lactating females is 0.17±0.12 ng / ml, this rate is higher than that of non-lactating she-camels that had parturated (p <0.01).

On the other hand there are 174 samples taken from 11 she-camels after a successful mating and/or during pregnancy (Table 3), there is only one negative sample of female N ° 204 matching one day posts mating. Progesterone essays indicated a significant rise (≥ 2.96 ng/ml) in progesterone 2 days after successful mating in all female (Figure 3), and found its basic level at calving day (Figure 4).

As regards to she-camel N° 504 (Figure 5) was successfully fertilized, the 214th experience day at 25 months age the progesterone level increased and remained at a high level until the end. But before this successful mating, monitoring brings up two peaks of 1.09 ng/ml and 1.51ng/ml the 138th and the 179th monitoring days followed by a sharp decline at basal level. We would have suspected an embryonic mortality, but the reproduction records do not state a mating of she-camel N°504 at these dates.

The plasma samples of pregnant females were used to reconstruct the critical points on progesterone serum profile for the Maghrabi she-camels (Figure 6). The profiles show a significant increase in progesterone beyond the first day after successful mating, the high level of progesterone maintained throughout pregnancy falls at calving to reach the basic minimum.

Progesterone hormone level in females is a very useful tool to monitor pregnancy in camels (Alfuraiji, 1998). The primary source of progesterone in the female camel is the corpus luteum (CL). The placenta does not contribute to progesterone secretion, and all camelids depend entirely on progesterone from the CL to maintain their pregnancy (Skidmore, 2005).

Statistical analysis, with General Linear Model procedure, indicates a significant effect (P<0.001) of age on serum progesterone level. These results were confirmed by regression procedure. The use of multiple linear regression models showed significant differences between category for the serum progesterone levels (F9,178 = 5.05, P < 0.001, SEM = 0.32; adjusted R2 = 0.16). The reproductive variables means value for serum progesterone in analyzed individuals, were significantly higher in the young pregnant females, pregnant multiparious females than those for growing female and empty multiparous females. During pregnancy progesterone hormone is found to be high and declined just after parturition (Alfuraiji, 1998; Skidmore, 2005). In empty female, progesterone level remained low and it increase again after successful mating. As demonstrate by different studies ovulation in camel is induced by mating stimuli (Ayoub et al., 2003; Skidmore, 2005; Ghazi, 2007). Progesterone level indicated a significant rise (>5 ng/ml) in progesterone 2 days after successful mating in all female (Abdel Rahim et El-Nazier , 1993). A Rapid drop of the progesterone concentration, to values of < 1 ng/ml on the day before, or the day of parturition, is recorded (Skidmore et al., 1996). Mobarak and El-Wishy (1971) reported that from 5 pregnancy months until parturition there to be a gradual decrease for this hormone. These results indicate a significant rise in progesterone two days after successful mating of all young she-camel.

The reproductive variables means value for serum progesterone in analyzed individuals, were significantly higher in the young pregnant females, pregnant multiparious females than those for growing female and empty multiparous females.

Progesterone level of for all studied dromedaries is low in empty female. It started to increase if successful mating exist and continue to be high until the end of the pregnancy.

Progesterone hormone level is a very useful tool to monitor pregnancy in camels.

Deen, A. (2008) Estradiol and testosterone profiles, their correlation with sexual libido in male camels. Proceedings of the WBC/ICAR Satellite Meeting on Camelid Reproduction, Budapest, Hungary.