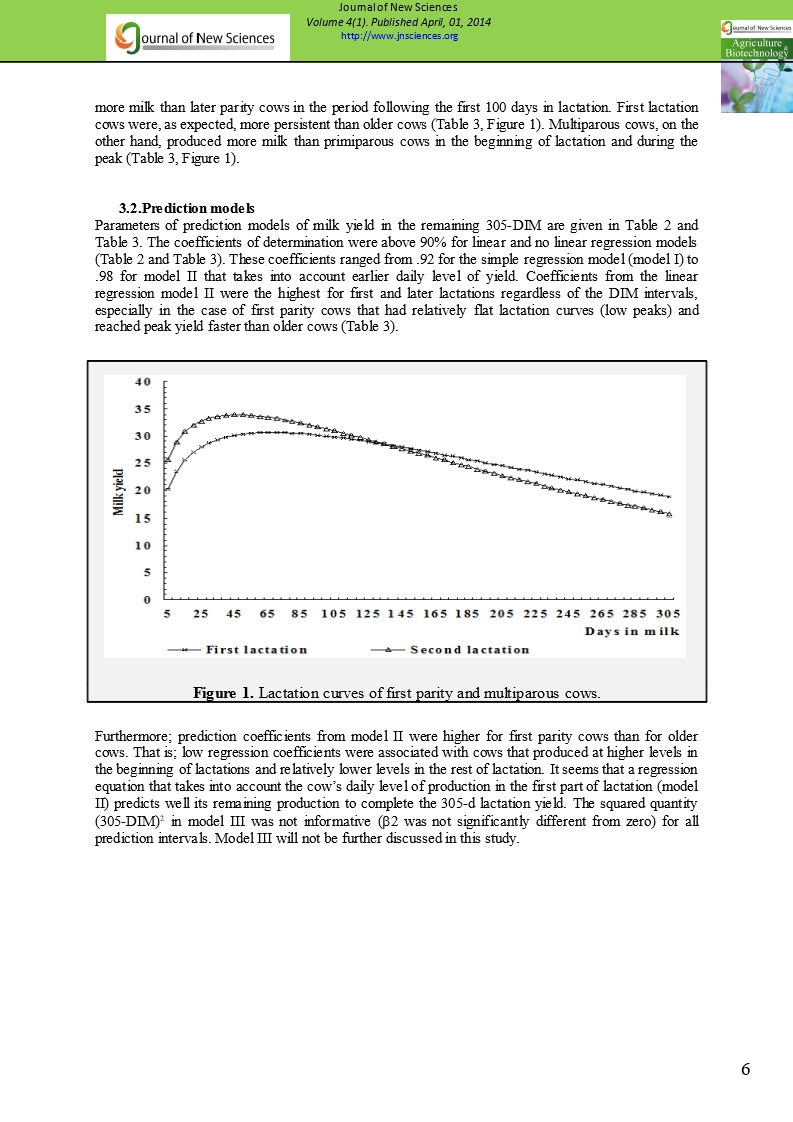 1ADIPARA LAB, Department of Science and Technology of Animal Productions, School of Higher Education in Agriculture of Mateur, University of Carthage, Tunisia

Summary - A set of 5831 records of Holstein-Friesian cows were used to test the accuracy of various linear regression models and the incomplete gamma function in projecting partial lactation records in Tunisian dairy herds. Prediction of milk yield produced in the 305 days minus actual days in milk (305–DIM) lactation period was carried out by different models: Three linear regression models and the incomplete gamma function for various intervals of days in milk (DIM), for both first and later parity cows, were used Coefficients of determination and prediction errors were used to test the goodness of fit of used models. A simple linear regression equation that accounts for daily yield during the actual DIM was found to be the most accurate among all models for estimating yield produced in the remaining of lactation. Prediction coefficients of the 305-Dim yield of the latter regression model varied from .79 to .83 and from .65 to .70 for primiparous and multiparous cows, respectively. These coefficients could be used to project incomplete lactations of dairy cows in Tunisia.

Culling and breeding decisions are often based on the standard 305 days production (305-d). A one test day yield is rarely used to eliminate cows for many reasons; in particular, low yield in a given test-day date might be a result of stress or accidents. Records in progress could however be used to predict a 305-d production. Several works (Norman et al., 1985; 1985; Bar-Anan et al., 1986; Gengler, 1995; Vargas et al., 2000) dealt with modelling full lactations and extending partial records. There are two major categories of models for prediction of yield during lactation, the linear regression models and the non linear models. Linear regression models were good predictors of production in the period following the peak of lactation, especially when the model included the last test-day record (Miller et al., 1972; Wiggans and Van Vleck, 1979; Bar-Anan et al., 1986). Models that were a good fit for lactation records needed an important number of parameters (Grossman et al., 1986; Vargas et al., 2000).

Projection of partial lactations is a common practice by many countries, especially those with functional genetic evaluations. Conditions (for example the minimum of days in milk for the record to be used in projection) for a short record to be projected do however vary from a country to another.

The objective of this study was to find a simple equation to predict a full lactation record from few test-day records for dairy cows in Tunisian herds.

A set of 5831 lactation records of Holstein-Friesian cows provided by the National Centre for Genetic Improvement (CNAG) at Sidi Thabet, Tunis, were used in the analysis. Data included the freshening date, parity, at least 10 consecutive test-day dates with corresponding yields, and the actual 305-d yield. Prediction of milk yield in the remaining lactation period (305-DIM) was studied for various intervals of DIM (Table 1). Each time a set of test-day records were generated from the complete set of records by deleting unnecessary records for a predefined DIM period.

Where P (305-DIM) is milk yield produced in the 305-DIM lactation period; , 1, 2, and  are regression coefficients; DIM is days in milk; PDIM represents actual production in DIM; and e are random errors. The estimated 305-d lactation yield was then calculated as:

where Yt is the observed milk yield at day t; a, b, and c are the curve parameters, a is linked to milk yield at the beginning of lactation, b to the ascending phase, and c to the decreasing phase; P305 is milk yield produced in the whole 305-d lactation period; PDIM and P(305–DIM): are as previously defined.

The a, b, and c parameters were found by fitting the incomplete gamma function (Wood, 1967). to test-day records across cows. Fitting was carried out by the Gauss-Newton algorithm in the NLIN procedure in SAS. Goodness of fit of prediction models for projecting partial production of first and later parity cows was studied by the coefficient of determination (1- the ratio of the residual sum of squares to the total sum of squares), the absolute value of the prediction error (actual yield – predicted yield), and the error variance.

Actual milk yield during the various DIM and for the remaining 305-DIM period are presented in Table 1 for both first and later parity cows. These data showed that first parity cows produced slightly more milk than later parity cows in the period following the first 100 days in lactation. First lactation cows were, as expected, more persistent than older cows (Table 3, Figure 1). Multiparous cows, on the other hand, produced more milk than primiparous cows in the beginning of lactation and during the peak (Table 3, Figure 1).

Parameters of prediction models of milk yield in the remaining 305-DIM are given in Table 2 and Table 3. The coefficients of determination were above 90% for linear and no linear regression models (Table 2 and Table 3). These coefficients ranged from .92 for the simple regression model (model I) to .98 for model II that takes into account earlier daily level of yield. Coefficients from the linear regression model II were the highest for first and later lactations regardless of the DIM intervals, especially in the case of first parity cows that had relatively flat lactation curves (low peaks) and reached peak yield faster than older cows (Table 3).

Furthermore; prediction coefficients from model II were higher for first parity cows than for older cows. That is; low regression coefficients were associated with cows that produced at higher levels in the beginning of lactations and relatively lower levels in the rest of lactation. It seems that a regression equation that takes into account the cow’s daily level of production in the first part of lactation (model II) predicts well its remaining production to complete the 305-d lactation yield. The squared quantity (305-DIM)2 in model III was not informative (2 was not significantly different from zero) for all prediction intervals. Model III will not be further discussed in this study.

The mean of error absolute values for the various models (Table 4) was the lowest for model II. Models I and IV (In the case of model IV, Yield was estimated by the area under the incomplete gamma curve corresponding to the 305–DIM period) were the least accurate in predicting milk yield. They had the greatest mean absolute errors (Table 4).

Prediction of yield in the remaining 305-DIM period seems to become more accurate as cows advance in lactation. Both mean of error absolute values and its standard deviation decreased consistently with the increase in the number of test-day yields. Furthermore, models’ coefficients of determination increased with the actual number of days in milk for first and later parity cows (Table 2). That is, all models were sensitive to the increased information from the cow’s lactation history.

Pearson correlation coefficients of 305-d yield predicted by the various models with actual yield for the same period were high for all prediction models (Table 5). There were no clear differences, with respect to these coefficients, among the different models as was the case of the prediction error. Correlation coefficients were slightly higher for yield estimated by model II, especially when actual milking time was short (short DIM intervals).

Projected lactation records can be used in making breeding decisions (culling) and in genetic evaluation. A simple and practical equation for predicting milk yield produced in The 305-DIM period from a cow’s producing history (the beginning of a 305-d lactation) was developed. A simple linear regression model that accounts for daily production level was sufficiently accurate in predicting milk yield for various DIM intervals. Coefficients of prediction were determined for various intervals of days in milk. These coefficients might be used to project part-lactation records in Tunisia.

Authors are thankful to the National Centre for Genetic Improvement at Sidi Thabet for providing the data.