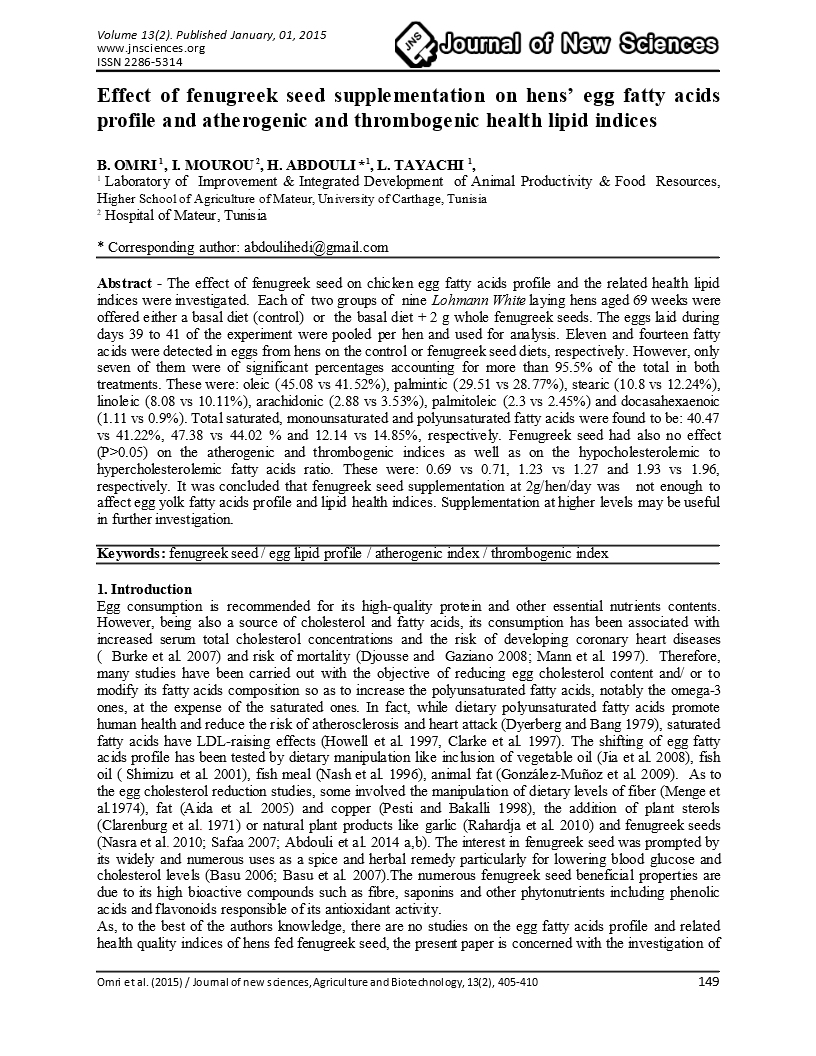 Abstract - The effect of fenugreek seed on chicken egg fatty acids profile and the related health lipid indices were investigated. Each of two groups of nine Lohmann White laying hens aged 69 weeks were offered either a basal diet (control) or the basal diet + 2 g whole fenugreek seeds. The eggs laid during days 39 to 41 of the experiment were pooled per hen and used for analysis. Eleven and fourteen fatty acids were detected in eggs from hens on the control or fenugreek seed diets, respectively. However, only seven of them were of significant percentages accounting for more than 95.5% of the total in both treatments. These were: oleic (45.08 vs 41.52%), palmintic (29.51 vs 28.77%), stearic (10.8 vs 12.24%), linoleic (8.08 vs 10.11%), arachidonic (2.88 vs 3.53%), palmitoleic (2.3 vs 2.45%) and docasahexaenoic (1.11 vs 0.9%). Total saturated, monounsaturated and polyunsaturated fatty acids were found to be: 40.47 vs 41.22%, 47.38 vs 44.02 % and 12.14 vs 14.85%, respectively. Fenugreek seed had also no effect (P>0.05) on the atherogenic and thrombogenic indices as well as on the hypocholesterolemic to hypercholesterolemic fatty acids ratio. These were: 0.69 vs 0.71, 1.23 vs 1.27 and 1.93 vs 1.96, respectively. It was concluded that fenugreek seed supplementation at 2g/hen/day was not enough to affect egg yolk fatty acids profile and lipid health indices. Supplementation at higher levels may be useful in further investigation.

Egg consumption is recommended for its high-quality protein and other essential nutrients contents. However, being also a source of cholesterol and fatty acids, its consumption has been associated with increased serum total cholesterol concentrations and the risk of developing coronary heart diseases ( Burke et al. 2007) and risk of mortality (Djousse and Gaziano 2008; Mann et al. 1997). Therefore, many studies have been carried out with the objective of reducing egg cholesterol content and/ or to modify its fatty acids composition so as to increase the polyunsaturated fatty acids, notably the omega-3 ones, at the expense of the saturated ones. In fact, while dietary polyunsaturated fatty acids promote human health and reduce the risk of atherosclerosis and heart attack (Dyerberg and Bang 1979), saturated fatty acids have LDL-raising effects (Howell et al. 1997, Clarke et al. 1997). The shifting of egg fatty acids profile has been tested by dietary manipulation like inclusion of vegetable oil (Jia et al. 2008), fish oil ( Shimizu et al. 2001), fish meal (Nash et al. 1996), animal fat (González-Muñoz et al. 2009). As to the egg cholesterol reduction studies, some involved the manipulation of dietary levels of fiber (Menge et al.1974), fat (Aida et al. 2005) and copper (Pesti and Bakalli 1998), the addition of plant sterols (Clarenburg et al. 1971) or natural plant products like garlic (Rahardja et al. 2010) and fenugreek seeds (Nasra et al. 2010; Safaa 2007; Abdouli et al. 2014 a,b). The interest in fenugreek seed was prompted by its widely and numerous uses as a spice and herbal remedy particularly for lowering blood glucose and cholesterol levels (Basu 2006; Basu et al. 2007).The numerous fenugreek seed beneficial properties are due to its high bioactive compounds such as fibre, saponins and other phytonutrients including phenolic acids and flavonoids responsible of its antioxidant activity.

As, to the best of the authors knowledge, there are no studies on the egg fatty acids profile and related health quality indices of hens fed fenugreek seed, the present paper is concerned with the investigation of such aspect in extension to the effects of fenugreek seed on laying performance and egg physical quality traits and cholesterol profile which have been reported previously (Abdouli et al. 2014 a)

Each of two groups of nine Lohmann White laying hens aged 69 weeks were offered either a basal diet (control) or the basal diet + 2 g whole fenugreek seeds (WFS). Each hen was daily fed the set quantity of fenugreek seeds blended with 100 g of basal diet made of yellow corn, soybean meal and minerals and vitamins. The fatty acids profile of the diet and fenugreek seed are shown in Table 1. The hens were housed in individual cages with individual feed-trough and common water-trough in a room with ambient temperature of about 20°C and a photoperiod of 16 h light: 8h darkness cycle. Water was provided ad libitum intake throughout the trial period which lasted 41 days. The eggs laid during days 39 to 41 of the experiment were pooled per hen and used for analysis.

Health lipid quality was assessed by calculating the atherogenic and thrombogenic indices as well as the ratio between the hypocholesteronic and hypercholesteronic using the following equations:

a) Atherogenicity Index (Ulbricht and Southgate 1991)

b) Thrombogenicity Index (Ulbricht and Southgate 1991)

The present results extend those in Abdouli et al (2014 a) which showed no effect (P>0.05) of fenugreek seed supplementation on triglyceride, total cholesterol and HDL cholesterol in egg yolk.

The fatty acid composition of eggs from hens fed the control diet and those fed FS are shown in Table 2. The numbers of fatty acids were different as linolenic (C18:3n3), gadoleic (C20:1) and eicosadienoic (C20:2-n6) were detected only in eggs from 1 to 2 of the 9 hens offered fenugreek seed. Therefore their mean percentages were very low not exceeding, at most, 0.043 % and highly variable. Other fatty acids, namely C17:0, C20:3 and C20:5 were detected in eggs from only 1 to 2 hens fed control diet and 3 to 4 hens on fenugreek seed. The remaining fatty acids shown in table 2 were detected in almost all hens irrespective of their feed and their respective percentages were not different (P>0.05) between the two groups of hens. Values for individual fatty acids in the first two mentioned groups were very low and could not be of any nutritional significance. On such basis, the egg yolk fatty acids profiles of the present study appeared in agreement with that of Golzar et al. (2013). For chicken fed a corn and soybean-based diet, they found no C16:1, C17:0, C20:1, C20:2, C20:3 and C20:5, trace for C22:5, small values for C18:3 (0.29%), C22:6 (0.54%), C14:0 (0.55%) and C20:4 (1.51%) and values as high as 10.51% for C18:0, 13.66% for C18:2, 29.31% for C16:0 and 43.63% for C18:1. These four predominant fatty acids were the ones found predominant in eggs in our study as well as in the control diet and in whole fenugreek seed. However, linoleic acid was the most abundant in fenugreek seed accounting for more than 55% yet its percentage in eggs increased only slightly in fenugreek seed fed hens. Such finding suggested that the distribution of fatty acids in egg yolk reflected that of dietary fat and, consequently, the lack of fenugreek seed effect on egg fatty acids profile might have been due to its small amount offered (2 g/hens/day). In this line, Raj et al (2013) reported similar egg fatty acids profiles for diets containing linseed oil, mustard oil, full fat sardine fish and fenugreek seed at 0 or 6 g/kg. In addition to the transfer of the above mentioned fatty acid from the diet, palmitoleic (C16:1), arachidonic (C20:4) and docosahexaenoic (C22:6) were generated through non-lipidic carbon sources or through desaturation and elongation of dietary fatty acids. It has been reported that dietary C18:2 and C18:3 act as the precursors of yolk C20:4 and C22:6, respectively (Surai et al. 1999; Mennicken et al. 2005).

Grouping egg fatty acids in classes according to their number of double bonds (saturated, monounsaturated, polyunsaturated and the location of the first double bond relative to the -CH3 or omega (n-) end rather than taking them individually is considered more indicative of the whole fat health-quality. Moreover, these classes have been used to define some lipid health-quality indicators like the ratio between hypocholesterolemic and hypercholesterolemic fatty acids, the atherogenicity (AI) and thrombogenicity (TI) indices. The second is defined as the ratio of the sum of the main saturated fatty acids considered pro-atherogenic (favoring the adhesion of lipids to cells) to that of the main unsaturated qualified as anti-atherogenic (inhibiting the aggregation of plaque). The third, defined as the ratio of the pro-thrombogenetic (saturated) to the anti-thrombogenetic fatty acids, shows the tendency to form clots in the blood vessels.

The aforementioned parameters calculated in the present study were reported in table 3. Although, there were a slight decrease in monounsaturated and an increase in polyunsaturated and omega-6, all parameters were not affected (P>0.05) by fenugreek seed supplementation. Whether greater changes could be achieved with a greater fenugreek seed intake (> 2g/hen/d) remained to be investigated. Very close values for eggs from hens on corn (61.13%), soybean meal (18,35%) and wheat (10%)-diet have been reported by Golzar et al. ( 2013). Indeed, their values for saturated (SFA), monounsaturated (MUFA) and polyunsaturated fatty acid (PUFA) were found to be 40.37, 43.63 and 15.99%, respectively. Although dietary mono-unsaturated fatty acids were reported to be very effective in lowering blood cholesterol concentration and in preventing coronary heart disease (Grundy 1980), the decrease of their percentage observed in the present study did not imply a deterioration in egg health-lipid quality as there was no adverse effect on the other quality indices. Indeed, the hypocholesterolemic to hypercholesterolemic fatty acids ratios were close to 2 for both treatments. In fact, the higher this ratio, the more adequate that oil or fat is for the nutrition (Santos-Silva et al. 2002). To the best of our knowledge, such index for chicken eggs could not be found in the literature whereas values varying from 1.56 to 2.46 have been reported for fish (Ivane et al. 2014; Testi et al. 2006) known as a source of fatty acids considered highly beneficial for human health. On the other hand, although the percentage of omega -6 fatty acids in the current investigation was high mostly because of the rise in linoleic acid, the omega-6 to omega-3 fatty acids ratios were within the range of values ( 12.08:1 to 16.33:1) reported for hens fed 7% lipid diets in which 4% was composed of fats, oils or oleins added to increase polyunsaturated fatty acids levels (González-Muñoz et al. 2009). However, They were smaller than that (18.16:1) for hens on diet made of corn, soybean meal and wheat without fat supplementation (Golzar et al. 2013), and much higher than that (5-10:1) recommended by Food Agriculture Organization/ World Health Organization (Trautwein, 2001).On the other hand, the mean values of atherogenic and thrombogenic indices were not also affected by fenugreek supplementation. Both were within the range of values found by Capra et al. (2013) for meat of rabbits reared with or without fresh alfalfa ( 0.58 - 0.62 for the atherogenic index and 0.80 -0.96 for thrombogenic index) and by Ivane et al. (2014) for fish ( 0.55 - 0.60 for the atherogenic index and 0.82 - 0.87 for thrombogenic index. These indices take into account the different effects of fatty acids on human health, most notably on the probability of increasing the incidence of coronary diseases such as atheroma and thrombus formation, and the lower the their values, the more beneficial the fat source to such diseases.

Although fenugreek seed at 2g/hen/day did not affect significantly egg yolk fatty acids profile and lipid health indices when supplemented a corn - soybean meal diet, it was associated with the detection of some fatty acids not detected in eggs from the hens on the control diet. These fatty acids were of too low concentrations and, therefore, of no beneficial health value. Such finding suggested that fenugreek seed supplementation at higher levels may be necessary to modify favorably egg fatty acids profile.

Abdouli H, Omri B, Tatachi L (2014 a) Effect of whole fenugreek seed before and after its maceration in water on hens’ laying performance and egg cholesterol profile. J New Sci 8(4):28-34.

Surai PF, Speake BK, Noble RC, Mezes M (1999) Species-specific differences in the fatty acid profiles of the lipids of the yolk and of the liver of the chick. J Sci of Food and Agri 79:733–736.

Trautwein EA (2001) n-3 Fatty acids-physiological and technical aspects for their use in food. Eur J Lipid Sci and Technol 103:45–51