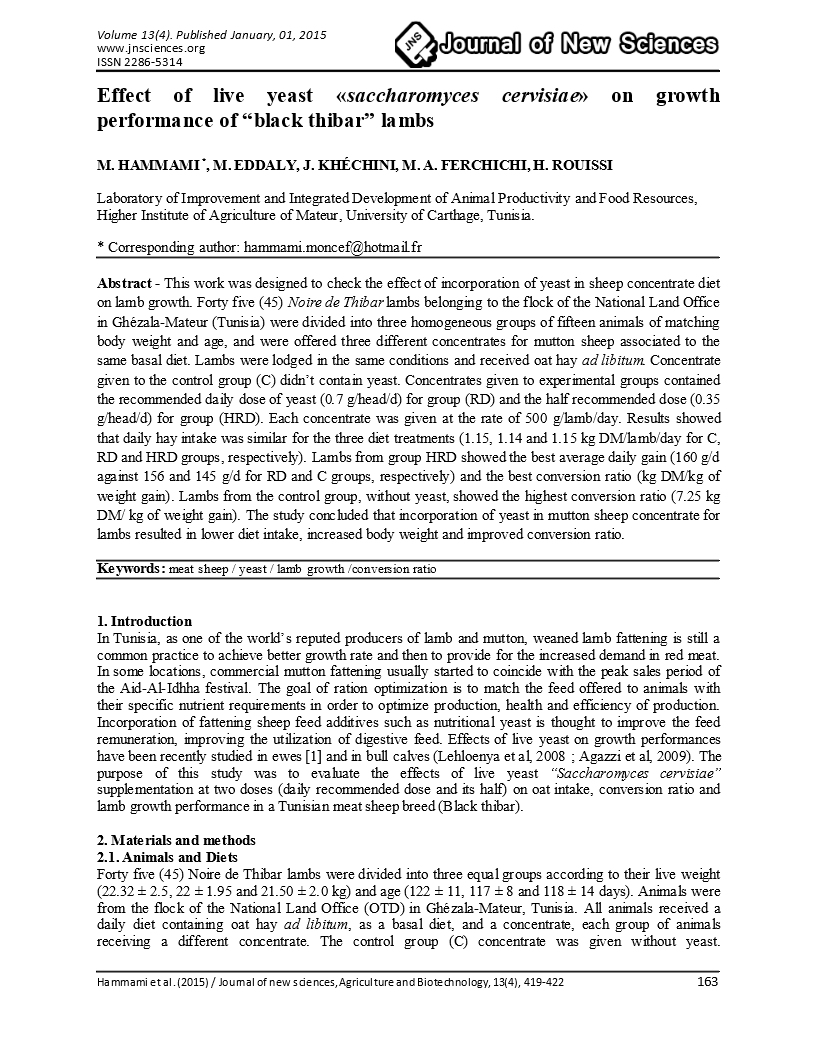 Laboratory of Improvement and Integrated Development of Animal Productivity and Food Resources,

Higher Institute of Agriculture of Mateur, University of Carthage, Tunisia.

Abstract - This work was designed to check the effect of incorporation of yeast in sheep concentrate diet on lamb growth. Forty five (45) Noire de Thibar lambs belonging to the flock of the National Land Office in Ghézala-Mateur (Tunisia) were divided into three homogeneous groups of fifteen animals of matching body weight and age, and were offered three different concentrates for mutton sheep associated to the same basal diet. Lambs were lodged in the same conditions and received oat hay ad libitum. Concentrate given to the control group (C) didn’t contain yeast. Concentrates given to experimental groups contained the recommended daily dose of yeast (0.7 g/head/d) for group (RD) and the half recommended dose (0.35 g/head/d) for group (HRD). Each concentrate was given at the rate of 500 g/lamb/day. Results showed that daily hay intake was similar for the three diet treatments (1.15, 1.14 and 1.15 kg DM/lamb/day for C, RD and HRD groups, respectively). Lambs from group HRD showed the best average daily gain (160 g/d against 156 and 145 g/d for RD and C groups, respectively) and the best conversion ratio (kg DM/kg of weight gain). Lambs from the control group, without yeast, showed the highest conversion ratio (7.25 kg DM/ kg of weight gain). The study concluded that incorporation of yeast in mutton sheep concentrate for lambs resulted in lower diet intake, increased body weight and improved conversion ratio.

In Tunisia, as one of the world’s reputed producers of lamb and mutton, weaned lamb fattening is still a common practice to achieve better growth rate and then to provide for the increased demand in red meat. In some locations, commercial mutton fattening usually started to coincide with the peak sales period of the Aid-Al-Idhha festival. The goal of ration optimization is to match the feed offered to animals with their specific nutrient requirements in order to optimize production, health and efficiency of production. Incorporation of fattening sheep feed additives such as nutritional yeast is thought to improve the feed remuneration, improving the utilization of digestive feed. Effects of live yeast on growth performances have been recently studied in ewes [1] and in bull calves (Lehloenya et al, 2008 ; Agazzi et al, 2009). The purpose of this study was to evaluate the effects of live yeast “Saccharomyces cervisiae” supplementation at two doses (daily recommended dose and its half) on oat intake, conversion ratio and lamb growth performance in a Tunisian meat sheep breed (Black thibar).

Forty five (45) Noire de Thibar lambs were divided into three equal groups according to their live weight (22.32 ± 2.5, 22 ± 1.95 and 21.50 ± 2.0 kg) and age (122 ± 11, 117 ± 8 and 118 ± 14 days). Animals were from the flock of the National Land Office (OTD) in Ghézala-Mateur, Tunisia. All animals received a daily diet containing oat hay ad libitum, as a basal diet, and a concentrate, each group of animals receiving a different concentrate. The control group (C) concentrate was given without yeast. Concentrates given to experimental groups contained the recommended daily dose of yeast (0.7 g/head/d) for group (RD) and the half recommended dose (0.35 g/head/d) for group (HD). The feed composition of the control andexperimental groups is given in table 1. Each concentrate was given on the basis of 500 g/head distributed in two equal meals a day. All animals were offered fresh water renewed twice a day.

Animals were permanently housed with similar environmental, handling, and feeding conditions throughout the experiment, each group being in a separate compartment of 12 m2 which corresponded to a density of 1 m2/lamb. Each compartment was fitted out with a rack of 2.5 m for forage, a manger for concentrate distribution and a collective drinking trough.Periods consisted of 2 wk of adaptation and 10 wk of measurements for each group. Concentrate was offered twice a day. Forage was provided in two equal meals at 08:00 and 15:00, with the quantities being adjusted in order to have around 15% as refused feeds. Daily feed intake was measured during the experimental period for each group. Distributed and refused feeds were weighed daily, and one sample from each feed was taken, twice a week, for analyses.

All chemical analyses were carried out in the Animal Nutrition Laboratory of the Agricultural High School in Mateur, Tunisia. At birth, lambs were ear tagged for identification and then weekly weighed, in the same conditions (on an empty stomach: to have eaten or drunk nothing), during the experimental period. This allows, for each lamb, the recording of birth weight, body weight evolution and average daily gain (ADG). The conversion index of the ratio (CR), which represents the balance between the ingested feed and the body weight gain during the experimental period, was also recorded.

Data were gathered according to the three levels of diets, the other environmental variables that were thought to affect the studied traits being identical for all animal groups. There were three diet groups (C, RD and HRD). Dependent variables were feed intake, conversion ratio and body weights. Data were analyzed by the General Linear Model (GLM) procedure of the Statistic Analysis System programme, SAS® package (SAS, 1989), by using the following model:

Daily forage intake was not affected by treatment (P > 0.05) with average values of 1.15, 1.14 and 1.15 kg DM/lamb/day for C, RD and HRD groups, respectively. Such values were considered acceptable compared with those reported in literature, perhaps because of the relatively good quality of the hay (0.65 UFL) and associated concentrates. In fact, the concentrates were quantified so that the fermentation conditions in rumen had to be favourable to the bacterial proliferation which leads to a maximum forage intake (Chermiti, 1994). The hay intake had the same tendency for the three animal groups.

The evolution of the live weight of lambs and average daily gain is shown in Table 2 and in figure 1. No significant difference (P > 0.05) in lamb weights between all animal groups was observed. These results agreed with those reported by Selmi et al. (2010) for the Sicilo-Sarde dairy breed. Live weights ranged from 22.32 to 32.47 Kg for lambs from group C, from 21.5 to 32.42 Kg for those from group RD and from 22 to 33.2 kg for group HRD . The slightly higher live weights observed for RD and HRD groups could be attributed to the yeast “Saccharomyces cervisiae” effect which stimulates the cellulolytic and lactic acid bacteria activities and improves the fermentation profile characteristics in the rumen (Ghorbani et al 2002). The average daily gain observed during the experience for lambs from group HRD (160 g/d) and group RD (156g/d) seemed slightly higher than that for group C (145g/d). The “Saccharomyces cervisiae” yeast, provided with concentrates, improved the nutrient digestibility and optimized the ruminal fermentations which allows to an improvement of the lamb growth performances.

Live body weight for lambs of the control and experimental groups are shown in figure 1.

Concerning the feed conversion efficiency, conversion ratio reached 4.16, 3.60 and 3.15 kg DM/kg of weight gain for C, RD and HRD groups, respectively. A higher feed efficiency was observed for animals receiving the double recommended dose of yeast. Such a result may be explained by the fact that the provided yeast increases the lamb growth rate (Fraysse et Darré, 1990) which is always negatively correlated to the feed conversion ratio (Soltner. 1990).

Results showed that incorporation of the live yeast « Saccharomyces cervisiae » in sheep concentrates led to a decrease in oat dray matter intake, an increase in live weight and an enhancement of the feed conversion ratio, especially in lambs receiving the half of recommended dose of yeast. However, more research on this topic would be useful to investigate the effect of such feed additives on carcass yield and quality as well as the economic profitability of their utilization.