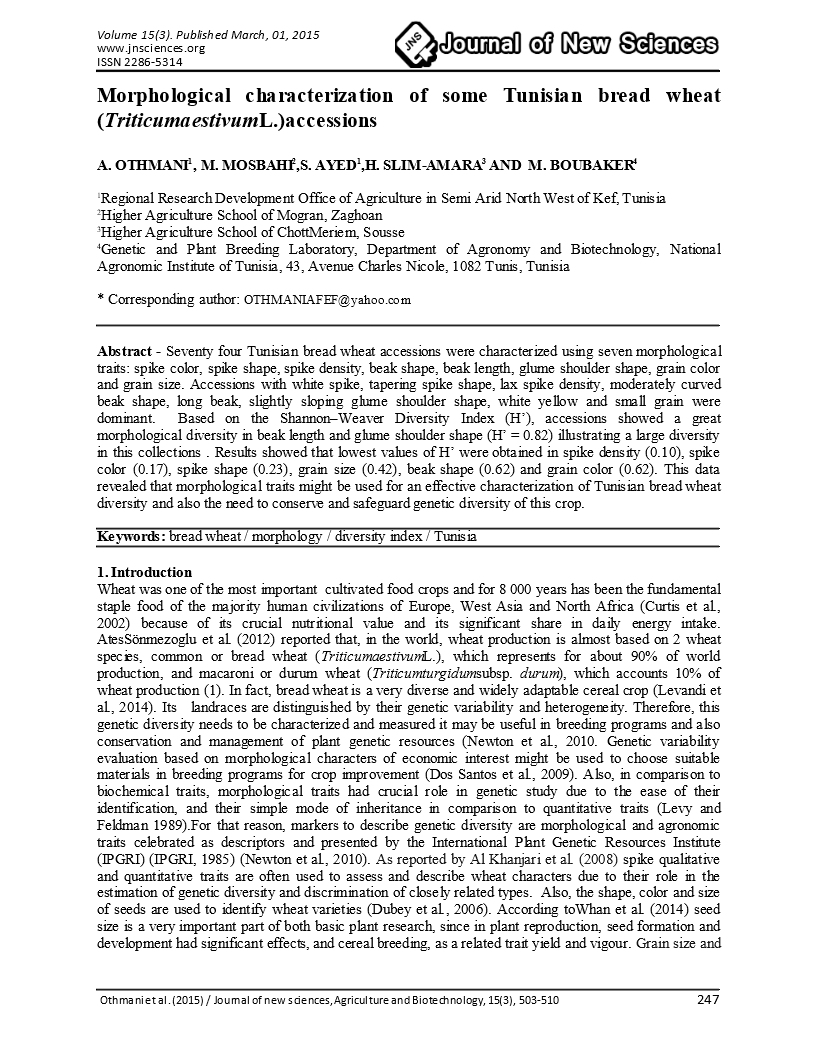 Wheat was one of the most important cultivated food crops and for 8 000 years has been the fundamental staple food of the majority human civilizations of Europe, West Asia and North Africa (Curtis et al., 2002) because of its crucial nutritional value and its significant share in daily energy intake. AtesSönmezoglu et al. (2012) reported that, in the world, wheat production is almost based on 2 wheat species, common or bread wheat (TriticumaestivumL.), which represents for about 90% of world production, and macaroni or durum wheat (Triticumturgidumsubsp. durum), which accounts 10% of wheat production (1). In fact, bread wheat is a very diverse and widely adaptable cereal crop (Levandi et al., 2014). Its landraces are distinguished by their genetic variability and heterogeneity. Therefore, this genetic diversity needs to be characterized and measured it may be useful in breeding programs and also conservation and management of plant genetic resources (Newton et al., 2010. Genetic variability evaluation based on morphological characters of economic interest might be used to choose suitable materials in breeding programs for crop improvement (Dos Santos et al., 2009). Also, in comparison to biochemical traits, morphological traits had crucial role in genetic study due to the ease of their identification, and their simple mode of inheritance in comparison to quantitative traits (Levy and Feldman 1989).For that reason, markers to describe genetic diversity are morphological and agronomic traits celebrated as descriptors and presented by the International Plant Genetic Resources Institute (IPGRI) (IPGRI, 1985) (Newton et al., 2010). As reported by Al Khanjari et al. (2008) spike qualitative and quantitative traits are often used to assess and describe wheat characters due to their role in the estimation of genetic diversity and discrimination of closely related types. Also, the shape, color and size of seeds are used to identify wheat varieties (Dubey et al., 2006). According toWhan et al. (2014) seed size is a very important part of both basic plant research, since in plant reproduction, seed formation and development had significant effects, and cereal breeding, as a related trait yield and vigour. Grain size and shape are two among main targets in wheat breeding programs (Okamoto et al., 2013). Moreover, Whan et al. (2014) reported that seed color is also an essential parameter for breeding of cereal varieties since it affects the quality and appeal of processed grain.

Tunisia is an area rich in crop biodiversity, it is characterised by a high diversity of climatic, edaphic and agronomic conditions (Ayed et al., 2009). Therefore, seventy four bread wheat accessions were characterized to evaluate morphological diversity based on seven parameters. Target

The plant material consisted of 74 accessions of Tunisian bread wheat (Triticumaestivum L.) collected by genebank. Using the International Union for the Protection of New Varieties of Plants (UPOV 1994), eight morphological traits (Table 1) were evaluated. The proportion of each trait was calculated then the Shannon–Weaver Diversity Index normalized by the maximum value in each case was determined as a measure of qualitative trait diversity in each accessions.

Shannon–Weaver Diversity Index is given by:

xi refers to the frequency of individuals in each class; n stands for the number of phenotypic classes (Hailu et al., 2010, Eticha et al., 2006). H’ of 0 indicates that is monomorphic, i.e all individual belong to one and the same category (clan), where as H’ of 1 indicates maximum diversity i.e individuals are equally dispersed among the n class (Derbewte al., 2013)

The frequency of each studied character is showed in Figure 1. Almost of spike (97.29 %) had white color (Figure 2) as was also observed by Ayed and Slim-Amara (2009) in Tunisian durum wheat. Accessions with tapering spike shape (Figure 3) were the most frequent (89.18 %), whereas those with parallel-sided and fusi-form were less with respectively only 9.45 % and 1.35 %. These results corroborate those of Zarkti et al. (2012) in which pyramidal spike were most recurrent (54 %) than parallel sides spike shape (7%) in durum wheat landraces of Morocco. Also, accession with lax spike prevailed (97.29 %), accession with very lax and intermediate spike density had the same frequency (1.35 %). Despite there was no compact and very compact spike. Ayed and Slim-Amara (2009) reported that wheat with a compact spike showed resistance to brown rust.

For beak shape, 48.64 % of accessions had moderately curved beak then 41.89 % had slightly curved beak, strongly curved and straight beak were rare (5.40 and 4.05 %), there was no geniculate shape (Figure 4). Caballero et al. (2010) found that geniculate beak was uncommon in one hundred lines of Creole wheat. The long beak (Figure 5) was the most found, detected in twenty eight of the seventy four bread wheat accessions while short, intermediate, very long and very short beak were established in 20, 18, 5 and 3 accessions.

Among the five possible glume shoulder shape, slightly slopping shape (Figure 6) appears with high frequency followed by straight and elevated shoulder shape (32.43 %, 28.37 % and 27.02 %). While Caballero et al. (2008) found that straight shoulder was the most frequent in Spanish populations of Triticumspelta L. (escanda).

Moreover, 44.59 % of accessions showed white yellow grain (Figure 7) followed by light brown/light red grain (32.43 %). In fact, Whan et al. (2014) reported that white grain was more wanted because of increased milling efficiency and consumer choice for a number of products. Also, Börner et al. (2005) reported that colored grains are related to a tendency to pre-harvest sprouting (germination in the ear). It could be a pleiotropic effect, or genetic linkage. Also, in wheat the relationship between red grain color and increased dormancy has been documented for over a century (Whan et al., 2014). Most accessions (70.27 %) had small grain (Figure 8). Rasheed et al. (2014) reported that the size and the shape of wheat grain had significant effect on grain weight and flour yield. Yuki et al. (2013) reported that grain size contribute to seedling vigor, while grain shape means a relative amount of the grain main growth axes.

Estimation values of morphological diversity among bread wheat accessions were given in table 2. The Shannon-Weaver index varied from 0.17 for spike color to 0.82 for beak length and glume shoulder shape, there was no monomorphism (H’< 0.01) (Derbew et al., 2013). In fact, a monomorphism might show that morphological diversity is not a requirement for continued landraces survival, which may indicate on breeding programs for low-input agricultural systems (Hailu et al., 2010).

The lower values of H’ for spike density (0.10), spike color (0.17), spike shape (0.23) grain size (0.42), beak shape (0.62) and grain color (0.62) may explain the relative homogeneity among bread wheat accessions. In the present study, the highest index was observed in beak length and glume shoulder shape (0.82). These values showed an important genetic diversity which might be useful in breeding and research programs.

In this study, there was variant distribution in qualitative traits of bread wheat accessions. A high diversity index (H’ = 0.82) demonstrate a significant phenotypic diversity of this germoplasme. Hence the necessity to conserve genetic resources due to their use in breeding programs

UPOV (1994). Draft guidelines for the conduct of test for distinctness, homogeneity and stability (wheat).TG/3/11 (proj), 32 pp