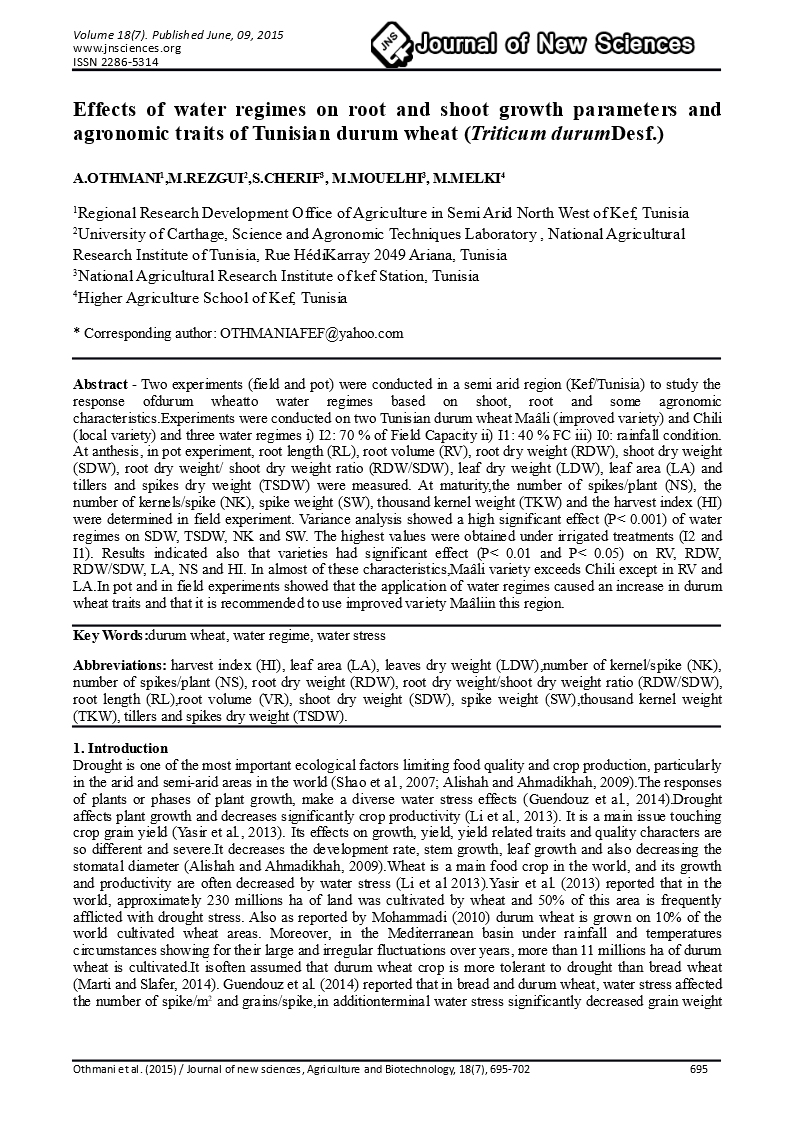 Abstract - Two experiments (field and pot) were conducted in a semi arid region (Kef/Tunisia) to study the response ofdurum wheatto water regimes based on shoot, root and some agronomic characteristics.Experiments were conducted on two Tunisian durum wheat Maâli (improved variety) and Chili (local variety) and three water regimes i) I2: 70 % of Field Capacity ii) I1: 40 % FC iii) I0: rainfall condition. At anthesis, in pot experiment, root length (RL), root volume (RV), root dry weight (RDW), shoot dry weight (SDW), root dry weight/ shoot dry weight ratio (RDW/SDW), leaf dry weight (LDW), leaf area (LA) and tillers and spikes dry weight (TSDW) were measured. At maturity,the number of spikes/plant (NS), the number of kernels/spike (NK), spike weight (SW), thousand kernel weight (TKW) and the harvest index (HI) were determined in field experiment. Variance analysis showed a high significant effect (P< 0.001) of water regimes on SDW, TSDW, NK and SW. The highest values were obtained under irrigated treatments (I2 and I1). Results indicated also that varieties had significant effect (P< 0.01 and P< 0.05) on RV, RDW, RDW/SDW, LA, NS and HI. In almost of these characteristics,Maâli variety exceeds Chili except in RV and LA.In pot and in field experiments showed that the application of water regimes caused an increase in durum wheat traits and that it is recommended to use improved variety Maâliin this region.

Drought is one of the most important ecological factors limiting food quality and crop production, particularly in the arid and semi-arid areas in the world (Shao et al., 2007; Alishah and Ahmadikhah, 2009).The responses of plants or phases of plant growth, make a diverse water stress effects (Guendouz et al., 2014).Drought affects plant growth and decreases significantly crop productivity (Li et al., 2013). It is a main issue touching crop grain yield (Yasir et al., 2013). Its effects on growth, yield, yield related traits and quality characters are so different and severe.It decreases the development rate, stem growth, leaf growth and also decreasing the stomatal diameter (Alishah and Ahmadikhah, 2009).Wheat is a main food crop in the world, and its growth and productivity are often decreased by water stress (Li et al 2013).Yasir et al. (2013) reported that in the world, approximately 230 millions ha of land was cultivated by wheat and 50% of this area is frequently afflicted with drought stress. Also as reported by Mohammadi (2010) durum wheat is grown on 10% of the world cultivated wheat areas. Moreover, in the Mediterranean basin under rainfall and temperatures circumstances showing for their large and irregular fluctuations over years, more than 11 millions ha of durum wheat is cultivated.It isoften assumed that durum wheat crop is more tolerant to drought than bread wheat (Marti and Slafer, 2014). Guendouz et al. (2014) reported that in bread and durum wheat, water stress affected the number of spike/m2 and grains/spike,in additionterminal water stress significantly decreased grain weight and plant dry mass. Moisture stress is known to reduce biomass, tillering ability and grain size of wheat at any stage when it occurs (Akram, 2011).A main factor to augment wheat yield potential is an extended period of grain filling stage resulting in increased Harvest Index (HI)(Semenov et al. 2014). Diverse mechanisms of the crop response system are concerned at diverse phonological stages of water stress (Zhang et al., 2013). Wang et al. (2012) reported that root system plays a fundamental role in crop water absorption. The comprehension of the genetic and the physiological adaptive mechanisms controlling water stress tolerance is an essential aspect in plant biology. For water deficit tolerance, plants need to take out as much humidity as possible from the soil. Therefore establishment of a profound and profuse root system is wanted for the extraction of water from thesoil and also the competition with weeds (Donaldson, 1996). The root growth response to drought conditions is an aspect contributing significantly to drought tolerance (Adda et al., 2005).At the beginning of the vegetation period, according to Schittenhelm et al. (2014),winter wheat may take the maximum of the soil water available by their deep root systems. Small root length density (RLD), which limited utilization of profound soil water by the plant, was one of the causes for the lower yield in rain-fed and one irrigation applied before or after sowing treatments in comparison with the one irrigation applied during recovery to the jointing stages treatment in dry seasons for winter wheat (Zhang et al., 2013). Adda et al.(2005) reported that under dry conditions, root system growth is frequently less inhibited than shoot development in plants growing. Continuance of root growth through water deficit is clearly important to maintain asufficient plant water supply. Donaldson (1996) reported that if plant is stressed early, then the stress is removed, later into the season root development recovers and continues.The competition among transpiration and leaf development rather root growthcan explain the contrasted responses to water deficit of the two plant parts.Also, Zhang et al. (2013) reported that under drought stress conditions, a best partitioning of dry matter among the root and the shoot parts and the further separation of dry matter among the vegetative and generative organs are consequently of crucial importance for yield.

In fact, restricted irrigation is an essential constraint forwheat production in rainfed, tropical, arid, and semi-aridregions (Shirazi et al., 2014). Also, if the water supply is limited, critical stages of crop growth and soil humidity level must be respected (Kabir et al., 2009).Therefore, in this study, pot and field experiments were conducted to evaluate water regimes (three water stress levels) effects on two durum wheatvarieties (Maâli and Chili) based on their root, shoot and agronomic traits in semi arid region at anthesis and maturity stages.

Two experiments were simultaneously conducted during 2011-2012 growing season in a randomized split plot design with five replicates in a semi arid Tunisian region at the National Institute of Agronomic Research (INRAT) station of Kef with longitude 8.7and latitude 36.17. Three irrigation treatments were applied as a main factor: I2: 70% of field capacity (FC), I1: 40% FC and I0: rainfall and two durum wheat Maâli (improved variety) and Chili (local variety) as a sub factor.Sowing date was on11 Novemberand plant density was 350 seed/m2.Meteorological data (temperature and rainfall) were recorded and presented in table 1. Then soil characteristics were provided in table 2.

In field and pot experiment three water regimes were applied:

Water supply quantities during growth season were shown in table 3.

PVC cylinder (100 cm height and16 cm diameter) filled with a mixture of sand andclay-loam soil(2:1) were used.Each genotype was conducted in three water levels I2(70% of field capacity (FC)), I1 (40% FC) and I0 (rainfall) controlled by weighting methods (Shao et al., 2007).At anthesis stage, for each pot, roots were harvested and washed to eliminate the potting residue.

The varieties were cultivated in plots of 5 rows of 1 m length, 20 cm row space.For irrigation treatments, the distance between main plots was 0.5 m. At maturity, plots were hand harvested and threshed using a stationary thresher.

Five different characteristics were evaluated including number of spike/plant (NS), number of kernels/spike (NK), spike weight (SW), 1000 kernel weight (TKW) and harvest index (HI) which is defined as the ratio of grain yield to biomass yield at maturity (Ehdaie and Waines, 2001).

In pot experiment, variance analysis showed significant differences (P< 0.001 and P< 0.05) between the three water regimes for RV, SDW, RDW/SDW and TSDW, there was significant increase in almost traits under well watered conditions (I2) (Figure 1).Despite no significant difference between water regimes for LA, minimum value was obtained under rainfall condition (3.60 m2/m2) (table 4 and 5). Results showed no differences between I2 and I0 for RDW/SDW ratio, and the lowest value was obtained under I1 (0.28). Water regimes had a high significant effect on TSDW and on SDW (table 4), maximum values were unregistered under I2 (50.48 g and 56.87 g respectively).These results are in accord with those determined by El Midaoui et al. (2003) in 8 sunflower genotypes (Helianthus annuus L.) and three water potentials. Roots might serve as sinks for assimilates, varying somewhat the allocation of dry weight transported outside of leaves and stems (Plaut et al., 2004).At anthesis, important quantities of reserves had been accumulated in the stems in most combinations of crops varieties by environmental conditions (Serrago et al., 2013). In fact, in wheat grain filling depends on three chief sources: current assimilates formed by photosynthesis in stems and leaves, mobilization of the accumulated carbohydrates and N containing compounds in these organs and their following transport to the spike and growing kernels, and also assimilates produced by the spike (Plaut et al., 2004). Water stress affects both of the storage and mobilization of stem reserves. Plants under water deficit often store fewer reserves in the stem than non-stressed crops because of decreased photosynthesis, and thus decreased accessibility of photosynthate for storage (Ehdaie et al., 2008). Akram (2011) reported also that it is the leaf area is determinant character of crop yield. And the decrease in leaf area index is related to the decrease in cell enlargement, stunted growth and reduction of photosynthetic activity of leaves.

A significant difference between varieties was noted for treatments confounded (Table 4).In fact, Maâli variety showed the best results for the three treatments for almost studied traits.

In field, results showed a high significant difference between water regimes for the NK, TKW and SW. However, no significant decrease was detected between I1 and I0(table 6).

Varieties had significant effect on NS, it is higher in Maâli variety than in Chili. According to Guendouz et al. (2014) the differential response of varieties to water stress condition shows the drought tolerance capacity of wheat cultivars.

In this study, best values in most traits were obtained under I2 (Figure 1). Despite, the highest value of HI (3.54) was obtained under rainfall conditions (I0). Maâli variety had the highest value (36.28) (table 6,7). In fact, Ye et al. (2011) reported that previous studies have revealed that the largest contribution to augmented yield of modern wheat varieties was due to the increases in HI. Though, no difference between water regimes, it corroborate the results of Guendouz et al. (2014) where no significant difference in durum wheat among all the treatments: no irrigation (I0); 20 mm irrigation during the tillering stage (I1) and 40 mm irrigation during the heading stage(I2).In fact, Guendouz et al. (2014) reported that in the modern bread and durum wheat varieties, high yield are linked with theincreasing of the number of grains per spike or unit area.It is considered to be a determinant of yield in wheat crops and cultivars (Sinclair and Jamieson, 2006).Grains growth is decreased depending upon the level of water stress and the phase of grain development. In a wheat crop, water deficit before anthesis affects both the size and the number of spikes, therefore determines the potential number of kernels. Water stress at early grain development limits the grain sink (Ehdaie et al., 2008). Also, as reported by Akram (2011) in wheat,during later stages, water stresscould cause a reduction innumber of grains/ear and grain weight.

Alishah O., Ahmadikhah A., 2009. The Effects of Drought Stress on Improved Cotton Varieties in Golesatn Province of Iran.International Journal of Plant Production 3 (1), 17-26.