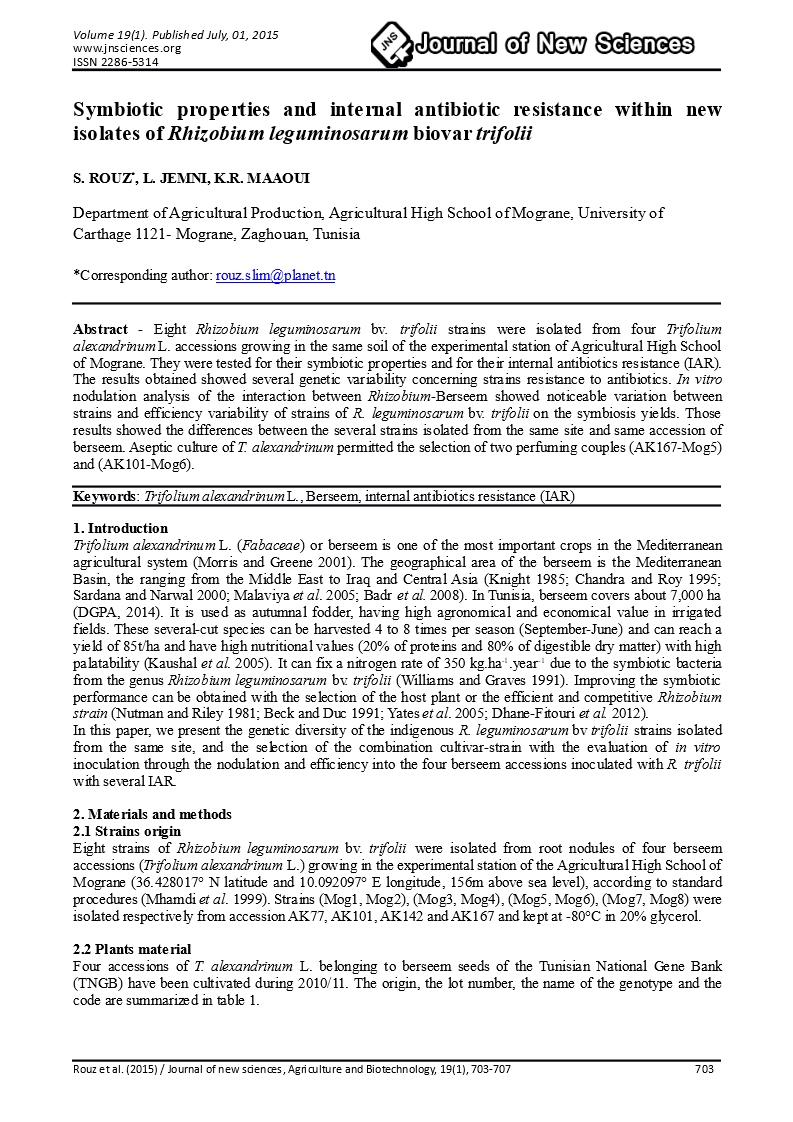 Abstract - Eight Rhizobium leguminosarum bv. trifolii strains were isolated from four Trifolium alexandrinum L. accessions growing in the same soil of the experimental station of Agricultural High School of Mograne. They were tested for their symbiotic properties and for their internal antibiotics resistance (IAR). The results obtained showed several genetic variability concerning strains resistance to antibiotics. In vitro nodulation analysis of the interaction between Rhizobium-Berseem showed noticeable variation between strains and efficiency variability of strains of R. leguminosarum bv. trifolii on the symbiosis yields. Those results showed the differences between the several strains isolated from the same site and same accession of berseem. Aseptic culture of T. alexandrinum permitted the selection of two perfuming couples (AK167-Mog5) and (AK101-Mog6).

Trifolium alexandrinum L. (Fabaceae) or berseem is one of the most important crops in the Mediterranean agricultural system (Morris and Greene 2001). The geographical area of the berseem is the Mediterranean Basin, the ranging from the Middle East to Iraq and Central Asia (Knight 1985; Chandra and Roy 1995; Sardana and Narwal 2000; Malaviya et al. 2005; Badr et al. 2008). In Tunisia, berseem covers about 7,000 ha (DGPA, 2014). It is used as autumnal fodder, having high agronomical and economical value in irrigated fields. These several-cut species can be harvested 4 to 8 times per season (September-June) and can reach a yield of 85t/ha and have high nutritional values (20% of proteins and 80% of digestible dry matter) with high palatability (Kaushal et al. 2005). It can fix a nitrogen rate of 350 kg.ha-1.year-1 due to the symbiotic bacteria from the genus Rhizobium leguminosarum bv. trifolii (Williams and Graves 1991). Improving the symbiotic performance can be obtained with the selection of the host plant or the efficient and competitive Rhizobium strain (Nutman and Riley 1981; Beck and Duc 1991; Yates et al. 2005; Dhane-Fitouri et al. 2012).

In this paper, we present the genetic diversity of the indigenous R. leguminosarum bv trifolii strains isolated from the same site, and the selection of the combination cultivar-strain with the evaluation of in vitro inoculation through the nodulation and efficiency into the four berseem accessions inoculated with R. trifolii with several IAR.

Four accessions of T. alexandrinum L. belonging to berseem seeds of the Tunisian National Gene Bank (TNGB) have been cultivated during 2010/11. The origin, the lot number, the name of the genotype and the code are summarized in table 1.

Isolates were tested for their ability to induce root nodules on four accessions of T. alexandrinum. Plants were grown in vitro in test tubes containing The Nicol et Thornton medium (Nicol and Thornton 1941). One presterilized and germinated seed was grown in each tube. Test tubes were covered with cotton to ensure good ventilation. After 10 days, plants were inoculated with 1ml of rhizobial broth culture containing 106 cell.ml-1. Each strain was tested in three replicates. Plants were kept in a growth chamber with 22 °C and photoperiod of 16 hours. Non-inoculated and nitrogen-fertilized (0.5 mg NH4NO3.l-1) controls were also included. Six weeks after inoculation, plants were harvested and scored for nodulation. Total dry weight and nitrogen were used as indicators of strains effectiveness. Nodulation was evaluated by counting root nodules. Data were analyzed by Plabstat software (Utz 1991), and followed by mean comparison by the LSD test.

Six several resistance profiles were found within the eight studied strains (Table 2). All the isolates are sensible to Erythromycine, Kanamycine, Streptomycine and Tetracycline, antibiotic inhibiting the protein synthesis. Mog 7 is sensitive to all the antibiotics. The antibiotic resistance spectrum showed for those strains is similar to results found by Gupta et al. (1989). Within the studied strains Mog1 and Mog4 (Nalr ), Mog3 and Mog6 (Genr, Nalr) have the same profile. Despite the fact that the number of the analyzed strains is reduced and coming from the same locality, 50% of those strains showed several IAR profiles. This indicates that studied strains form a heterogeneous group with a reduced parental relationship.

The effect of inoculation on four clover accessions after six week growing in vitro is illustrated in Table 3. Statistical analysis of the nodule number per plant shows: Rhizobium strains, accessions and interaction accession x strain is high significant at P˂0.01. All the strains are Nod+ within the four accessions. However, the nodules numbers vary from 1 to 9 per plant and are significantly different within the several treatments. Mog2 and Mog5 are the highly infective for the cultivar AK77. A high number of nodules doesn’t necessary increase the nitrogen fixation. Mog 4 (1 nodule.plant-1) [(8.73 mgN.plant-1)] fix three time the nitrogen than the strain Mog 7 associated to AK101 (6 nodules.plant-1) [2.75 mg N.plant-1].

Almost all the strains showed a significant increase (P˂0.01) of the dry matter (DM) compared to the control plant not inoculated (Table 4). Mog5 and Mog8 strains gave after the highest mean dry matter weight 40 days after germination for the four berseem accessions with 23 mg.plant-1 and 21.29 mg.plant-1 respectively. Mog5 produces twice than Mog1 and the control with nitrogen. Also Mog5 produces twenty times of dry matter than Mog 2 which has little lower dry matter than the control without nitrogen and seems to be more efficient. AK167 and AK101 have the highest dry matter for all the treatments with respectively 28.31 and 22.33 mg DM.plant-1.

Mog 5 produces the highest quantity of Total Nitrogenous Matter (TNM) for all the population with the value of 5.68 mg significantly higher (P˂0.01) than the control with nitrogen (4.62mg) (Table 5). Mog 5 and Mog6 show a TNM significantly higher than the control with nitrogen within the accessions AK101 and AK167. Those entries have the highest TNM compared to all the populations. Into the 32 analyzed combinations, the best ones were AK167 x Mog5 and AK101 x Mog6 which have practically 22 times of nitrogen than the low combination of AK142 x Mog2.

Isolates having the same profiles like Mog1 and Mog4 (Nalr), Mog3 and Mog6 (Nalr,Genr) don’t have the same efficiency with the same cultivars, which confirms the heterogeneity within the R. leguminosarum bv trifolii strains in a small site.

IAR analysis, nodulation and the efficiency of the symbiotic fixation demonstrate that the eight indigenous strains of R. leguminosarum bv trifolii are different, even if they are taken from the same accession and the same site. All strains are infective and able for nodulation within the four accessions (Nod+) but they don’t have the same efficiency. The strain Mog 5 has the highest Dry matter and TNM within the eight studied strains. It forms with the population AK167, an interesting symbiotic couple particularly this population have the higher winter Green and dry matter yield. Selection trials made the retention possible of another couple Mog6-AK101 as efficient as the other one. IAR difference within the studied strains can be used as identification’s markers for studying competitive traits within indigenous strains.

This study was supported by the Laboratory of Agricultural Production System and Sustainable Developpement and the Ministry of Higher Education and Scientific Research –Tunisia.

Nicol H, Thornton HG (1941). Competition between related strains of nodule bacteria and its influence of infection of the legume host. Proc. R. Soc. 130: 32-59.

Sardana V, Narwal SS (2000) Influence of time of sowing and last cut of fodder on the fodder and seed yields of egyptian clover. Journal of agricultural Science 134: 285-291