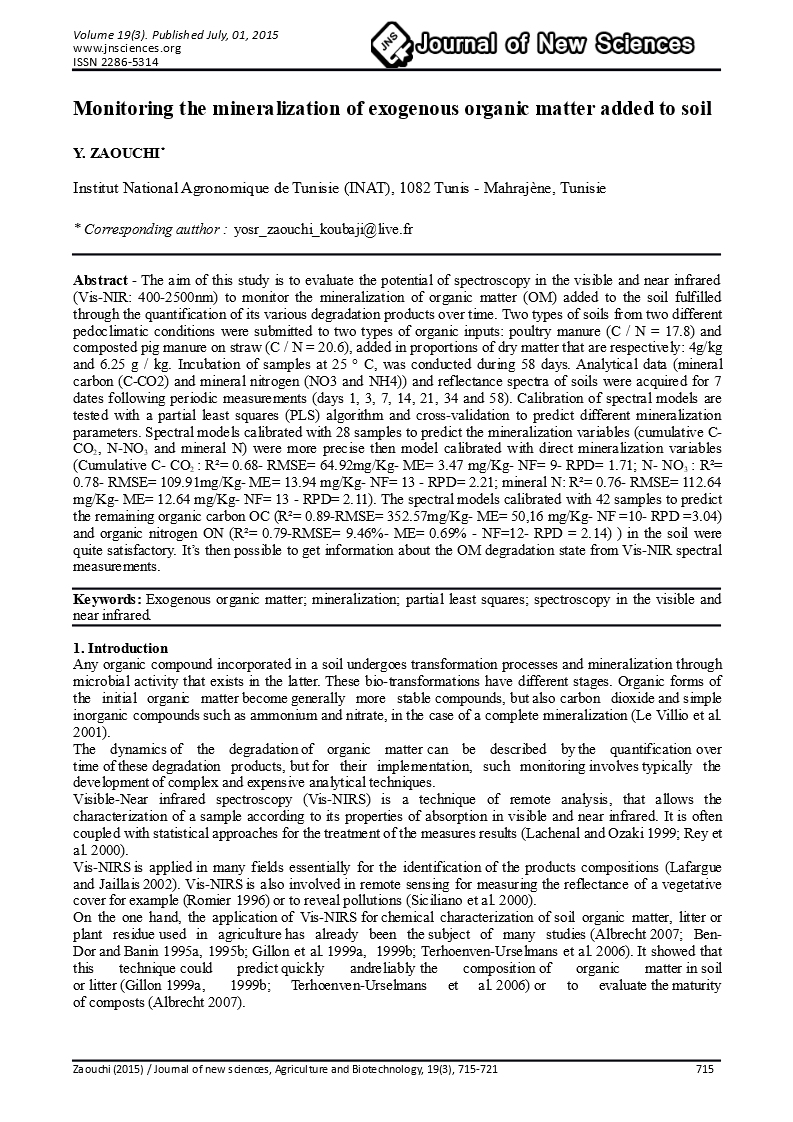 Any organic compound incorporated in a soil undergoes transformation processes and mineralization through microbial activity that exists in the latter. These bio-transformations have different stages. Organic forms of the initial organic matter become generally more stable compounds, but also carbon dioxide and simple inorganic compounds such as ammonium and nitrate, in the case of a complete mineralization (Le Villio et al. 2001).

The dynamics of the degradation of organic matter can be described by the quantification over time of these degradation products, but for their implementation, such monitoring involves typically the development of complex and expensive analytical techniques.

Visible-Near infrared spectroscopy (Vis-NIRS) is a technique of remote analysis, that allows the characterization of a sample according to its properties of absorption in visible and near infrared. It is often coupled with statistical approaches for the treatment of the measures results (Lachenal and Ozaki 1999; Rey et al. 2000).

Vis-NIRS is applied in many fields essentially for the identification of the products compositions (Lafargue and Jaillais 2002). Vis-NIRS is also involved in remote sensing for measuring the reflectance of a vegetative cover for example (Romier 1996) or to reveal pollutions (Siciliano et al. 2000).

On the one hand, the application of Vis-NIRS for chemical characterization of soil organic matter, litter or plant residue used in agriculture has already been the subject of many studies (Albrecht 2007; Ben-Dor and Banin 1995a, 1995b; Gillon et al. 1999a,  1999b; Terhoenven-Urselmans et al. 2006). It showed that this technique could predict quickly andreliably the composition of organic matter in soil or litter (Gillon 1999a,  1999b; Terhoenven-Urselmans et al. 2006) or to evaluate the maturity of composts (Albrecht 2007).

On the other hand, no research has focused on the ability of Vis-NIRS in monitoring the temporal evolution of an organic matter brought to a soil. However, the Vis-NIRS technique could be faster, cheaper and more accessible than traditional techniques used for monitoring the dynamics of mineralization of the exogenous MO. If the state of degradation of organic matter applied to the soil was affected by the reflectance in the range of wavelengths in the near infrared, it would be possible to follow the mineralization of organic matter by spectroscopy with a temporal resolution which is not accessible to conventional analytical techniques.

The overall objective of this study is to evaluate the potential of Spectrometry in the visible-near infrared to monitor the mineralization of the EOM made to a soil, by quantifying over time, its various degradation products.

In this study, two soils of different pedo-climatic origins have received two kinds of organic inputs. Monitoring the mineralization of both EOM is performed through periodic mineral analyzes. These data were then compared with the change in time of reflectance spectra of soil samples with statistical analysis. Then, test calibrations of spectral models were produced for the predictions of various mineralization parameters.

Two types of amendments with different biodegradability are mixed with samples of both soil types, poultry manure (C / N = 17.8) from a commercial breeding of Morbihan, and pig manure composted straw (C / N = 20.6) from an experimental station of the Agriculture Chamber of Guernévez (Finistère, France). The dose of contribution of these two EOM is calculated so that the soil is added to the same quantities of carbon and nitrogen.

Incubation in the dark in a controlled environment room, (temperature set at 25 ° C) was performed for soil samples for 58 days.

Soil samples were collected on a layer of 0 -20 cm and were sieved to less than 2 mm and stored in the fridge for one month before the start of the experiment. Soil moisture was then adjusted to field capacity. The various samples were then left to stand for 4 days before being incubated to allow the recovery of biological soil activity in order to avoid the "flush" effect (Bernard 1981).

For each treatment, three repetitions are performed for each treatment. Soil samples are conditioned in a series of glass jars hermetically closed. A pot of ultra pure water is put inside to keep the atmosphere saturated with moisture and prevent rapid drying of samples. A pot of 1M sodium hydroxide and volume equal to 20ml is also placed inside the jar in order to trap the CO2 produced by microbial respiration. A jar which only contains pots of sodium hydroxide and water, serves as a blank to measure CO2 in its atmosphere.

Periodic sampling is performed at different times: days 1, 3, 7, 14, 21, 34 and 58 of the incubation period. In fact, at each date, CO2 and mineral nitrogen (NO3 and NH4) produced by the various samples are measured. The determination of the CO2 is made by titration with the hydrochloric acid. At each sampling date, pots of sodium hydroxide are replaced for the next date. The quantity of carbon mineralized by microorganisms is calculated in mg / kg dry soil, via the volume of the hydrochloric acid used to neutralize one millilitre of sodium hydroxide, which allows to know the quantity of unreacted sodium hydroxide, that combined with the CO2 via substraction. The mineral nitrogen is extracted by a solution of potassium chloride KCl. The ammonium and nitrate ions are determined by continuous flow colorimetry using the reaction of Griess-Ilosvay for nitrates. The absorbance is measured in 550nm. The ammonium is measured using the reaction of Berthelot, in that case the absorbance is measured in 660nm (Duclaux 1965).

The acquisition of the spectral data of the various samples of soils were achieved the same day as the conditioning (mineral nitrogen, CO2) so that the spectral measures and those of laboratory are made for the same stage of mineralization of the organic matter. The recording of spectres is made by a visible-near infrared spectrometer ASD FieldSpec® (Analytical Spectral Devices, Inc., Boulder, CO, USA) operating in a range of wavelengths ranging from 350nm to 2500nm with a step of 1nm. For each sample, 4 measures are made and for each of these measures, 10 spectres are acquired. Only their average value is taken into account. These 4 measures are obtained by turning 4 times the capsule that contains the soil sample with a 90 ° angle, to eliminate the directional effect caused by the heterogeneousness of the surface (Karnieli et al. 1999), but also to compensate for any defects of symmetry of the lighting device.

2.5. Calibration tests of a model to predict the dynamics of OM mineralization using analytical data and spectra through the method of partial least squares (PLS)

In this part of data analysis, the objective is to determine parameters describing the mineralization of the organic matter in various treatments which are best predicted from the spectral data. The model is adjusted by cross-validation according to the "leave one out» method. The chosen model presents the highest R ² and the lowest RMSE and ME.

Figure 1 represent the mean spectrum for each treatment modality. Spectra significantly differ according to the nature of the EOM and the type of soil.

To make these models more robust, much larger data set should be used. The coefficient of determination (R²) must be greater than or equal to 0.82, in order to consider the model as accurate (De Girolamo et al. 2009).

Other calibrations were carried out from the values of organic carbon and nitrogen remaining in the soil. For the implementation of these models, 42 samples were used including soils without inputs and those containing the EOM. The resulting models for the prediction of these two parameters are more precise than those for not only carbon and mineral nitrogen but also for mineralized ammoniacal and nitric nitrogen (Figure 3). In fact, the spectral models calibrated to predict the remaining organic carbon OC (R²= 0.89-RMSE= 352.57mg/Kg- ME= 50,16 mg/Kg- NF =10- RPD =3.04) and organic nitrogen ON (R²= 0.79-RMSE= 9.46%- ME= 0.69% - NF=12- RPD = 2.14) ) in the soil were quite satisfactory.

The prediction of soil carbon by Vis-NIR has been successful in other works (Chang and Laird 2002; Ludwig et al. 2002; Schimann et al. 2007; Bellon-Maurel and McBratney 2011). The potential of Vis-NIRS to predict total nitrogen has been reported in several works, such as arable, forest and mineral soils and grasslands (Chodak 2008; Schimann et al. 2007). Chang and Laird (2002) and Terhoeven-Urselmans et al. (2006, 2008) were able to obtain reliable models to predict C / N ratio with Vis-NIRS. Contradictory results were obtained by Ludwig et al. (2002). St. Luce et al. (2014) used the Vis-NIR (400-2498 nm) to predict the evolution of total nitrogen, organic carbon and C / N ratios of Chernozemic soils of western Canada. They tested 146 samples for the calibration of modified PLS models and 49 others for validation. The Vis-NIRS predictions were considered reliable for total nitrogen and soil organic carbon (R2V > 0.80, RPDV > 2.4), but they are less for C / N ratio (R2V = 0.54, RPDV = 1.45). Other authors have confirmed the reliability of the Vis NIRS for the prediction of the total nitrogen and soil organic carbon (Chang and Laird 2002; Shepherd et Walsh, 2002 ; Brunet et al, 2007; Zornoza et al, 2008 ; Nduwamungu et al, 2009 ; Xie et al. 2011 ; St. Luce et al. 2012; Shi et al. 2013). However, Vohland et al. (2014) obtained accurate results for the organic carbon (CO) and nitrogen (N) predictions using the mid-infrared spectrum rather than the Vis-NIR. According to Fystro (2002), the quality of the obtained models for the prediction of total nitrogen and organic carbon of the soil is related to the high correlation (r = 0.98) between these two parameters. According to St. Luce et al. (2014), the positive correlations are observed in the NIR region (2148nm for soil total nitrogen, 2156nm for soil organic carbon and 1400nm for C/N ratio). Negative correlations are observed in the visible region at 546 nm for total nitrogen and organic carbon of the soil but they are at 1426nm for the C/N ratio.

Our primary results are satisfactory. However, the models obtained could still be improved. To increase the chances of success of these calibrations, it would be better to increase the number of repetitions.

Actually, instead of a global calibration by simultaneously integrating the two parameters (soil parameters and exogenous organic matter), it would be better to test the two soils with the same input, then the same ground with the two inputs. The use of two soils and two effluents of different natures and origins could have made the tested samples too heterogeneous, thus decreasing the accuracy of different calibrated models. According to Shi et al. (2013) and Xie et al. (2011), the use of soil samples taken from the same field or the same type of soil would produce accurate models. One hypothesis to explain the weakness of a predictive model is the ability of the Vis-NIRS to detect a wide combination of soil properties that contain various chemical bonds, such as clay content (St. Luce et al. 2014).

De Girolamo A, Lippolis V,   Nordkvist E,  Visconti A (2009). Rapid and non-invasive analysis of deoxynivalenol in durum and common wheat by Fourier-Transform Near Infrared (FT-NIR) spectroscopy. Food Additives and Contaminants A. 26: 907-917

Lachenal G, Ozaki Y (1999). Advantages of near infrared spectroscopy for the analysis of polymers and composites. Macromolecular symposia. 141 : 283.