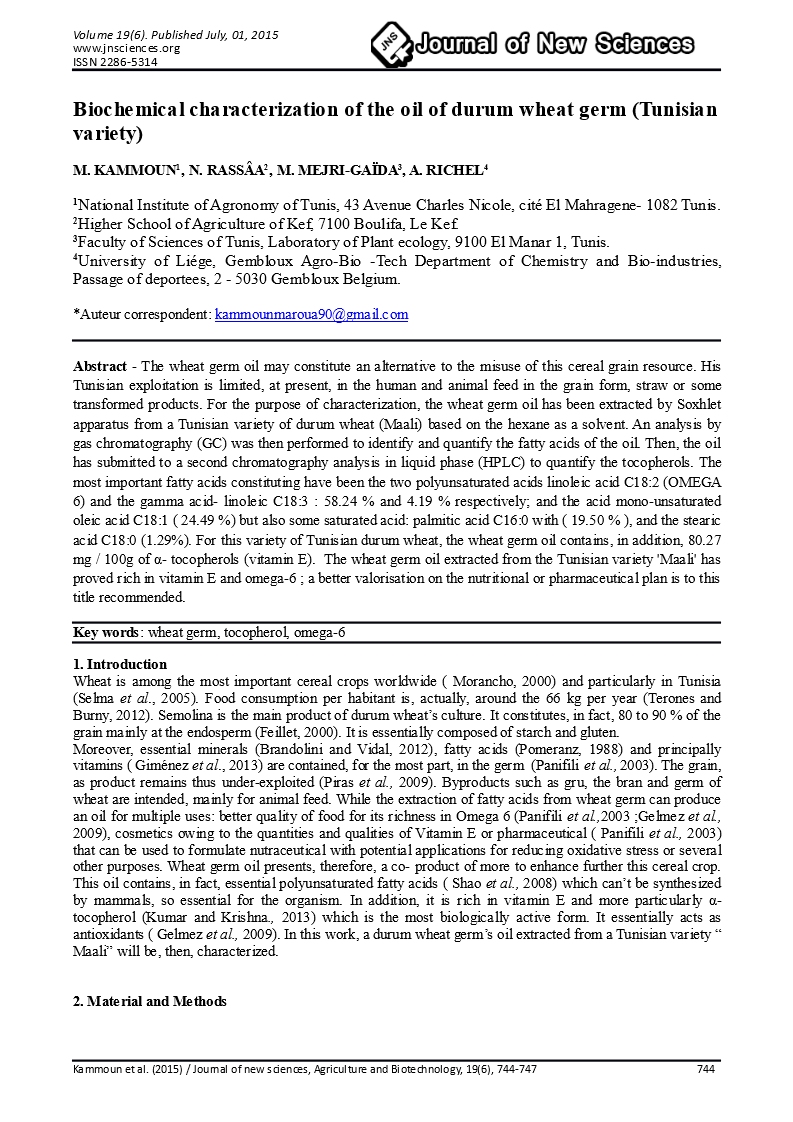 Abstract - The wheat germ oil may constitute an alternative to the misuse of this cereal grain resource. His Tunisian exploitation is limited, at present, in the human and animal feed in the grain form, straw or some transformed products. For the purpose of characterization, the wheat germ oil has been extracted by Soxhlet apparatus from a Tunisian variety of durum wheat (Maali) based on the hexane as a solvent. An analysis by gas chromatography (GC) was then performed to identify and quantify the fatty acids of the oil. Then, the oil has submitted to a second chromatography analysis in liquid phase (HPLC) to quantify the tocopherols. The most important fatty acids constituting have been the two polyunsaturated acids linoleic acid C18:2 (OMEGA 6) and the gamma acid- linoleic C18:3 : 58.24 % and 4.19 % respectively; and the acid mono-unsaturated oleic acid C18:1 ( 24.49 %) but also some saturated acid: palmitic acid C16:0 with ( 19.50 % ), and the stearic acid C18:0 (1.29%). For this variety of Tunisian durum wheat, the wheat germ oil contains, in addition, 80.27 mg / 100g of α- tocopherols (vitamin E). The wheat germ oil extracted from the Tunisian variety 'Maali' has proved rich in vitamin E and omega-6 ; a better valorisation on the nutritional or pharmaceutical plan is to this title recommended.

Wheat is among the most important cereal crops worldwide ( Morancho, 2000) and particularly in Tunisia (Selma et al., 2005). Food consumption per habitant is, actually, around the 66 kg per year (Terones and Burny, 2012). Semolina is the main product of durum wheat’s culture. It constitutes, in fact, 80 to 90 % of the grain mainly at the endosperm (Feillet, 2000). It is essentially composed of starch and gluten.

Moreover, essential minerals (Brandolini and Vidal, 2012), fatty acids (Pomeranz, 1988) and principally vitamins ( Giménez et al., 2013) are contained, for the most part, in the germ (Panifili et al., 2003). The grain, as product remains thus under-exploited (Piras et al., 2009). Byproducts such as gru, the bran and germ of wheat are intended, mainly for animal feed. While the extraction of fatty acids from wheat germ can produce an oil for multiple uses: better quality of food for its richness in Omega 6 (Panifili et al.,2003 ;Gelmez et al., 2009), cosmetics owing to the quantities and qualities of Vitamin E or pharmaceutical ( Panifili et al., 2003) that can be used to formulate nutraceutical with potential applications for reducing oxidative stress or several other purposes. Wheat germ oil presents, therefore, a co- product of more to enhance further this cereal crop. This oil contains, in fact, essential polyunsaturated fatty acids ( Shao et al., 2008) which can’t be synthesized by mammals, so essential for the organism. In addition, it is rich in vitamin E and more particularly α- tocopherol (Kumar and Krishna., 2013) which is the most biologically active form. It essentially acts as antioxidants ( Gelmez et al., 2009). In this work, a durum wheat germ’s oil extracted from a Tunisian variety “ Maali” will be, then, characterized.

Tunisian variety of durum wheat ( Triticum durum ) will be the subject of this study. The variety “Maali” is an improved germoplasm and characterized by large, closed, white and amber grains. It’s a Tunisian obtain from National Institute of Agronomic Research of Tunis (INRAT).

The germ is separated from the rest of the seed manually after humidification for 2 hours in distilled water. Once extracted, the germs were dried for 24 hours at 50°C and then finely ground

The oil was extracted by Soxhlet method. The amount of plant material in the cellulose cartridge was 1g. The later is then placed in the Soxhlet extractor to which are attached in the upper part a refrigerant and in the lower part a ground-necked flask containing 70 ml of n-hexane. The cycle was repeated several times until complete exhaustion. At the end of the extraction, the extracted was placed in a flask and dried at 40°C using a vacuum rotary evaporator. Finally it was placed for 30 seconds in an oven at 105 °C so that the solvent had completely evaporated (Dunford and Zhang, 2003).

We notice that the rate of α- tocophérol is very important, it is about 802 ppm. In comparison with other vegetable oils, it is highest in wheat germ oil, followed by sunflower oil (671 ppm) and Maize oil (222 ppm). The lowest level (96 ppm) is observed in Olive Oil (Table 1).

The results of the percentages of fatty acids obtained from this analysis are slightly higher than those of Dunfordand Zhang (2003) who used the same method of extraction by Soxhlet.Including linoleic acid 58.24% and oleic acid 24.29% against 56.8% and 14.6% respectively which recorded by Dunford and Zhang.

Wheat germ oil is, likewise, the richest in α- tocopherol 802.72 ppm relative to other vegetable oils of Olive, Soybean, Maize, Peanut and sunflower. The level of vitamin E which extracted from this variety of wheat “Maali” is higher than that obtained by Kumar and Krishna (2013) on an Indian germoplasm which the level does not exceed 508.59 ppm. This content may, however, vary according to the method and time of extraction from 665 to 2131ppm (Panifili et al., 2003).

This work has helped to highlight the qualities of a durum wheat germ oil, by-product of Tunisian variety “Maali”. The results were very conclusive and showed the richness of the seed on one hand and specifically in fatty acid Omega 6 which is an essential polyunsaturated acid to the body particularly to the nervous system and brain functioning , the prevention of cardiovascular diseases and the formation and maintenance of cell walls and certain immune cells. On the other hand, Tunisian wheat germ oil is reveled rich in α-tocopherol which is the most active form of vitamin E and whose exploitation is widespread in the pharmacological and cosmetics for multiple uses.

Kamal-eldin, A., &Andersson, R. (1997). A Multivariate Study of the Correlation Betw