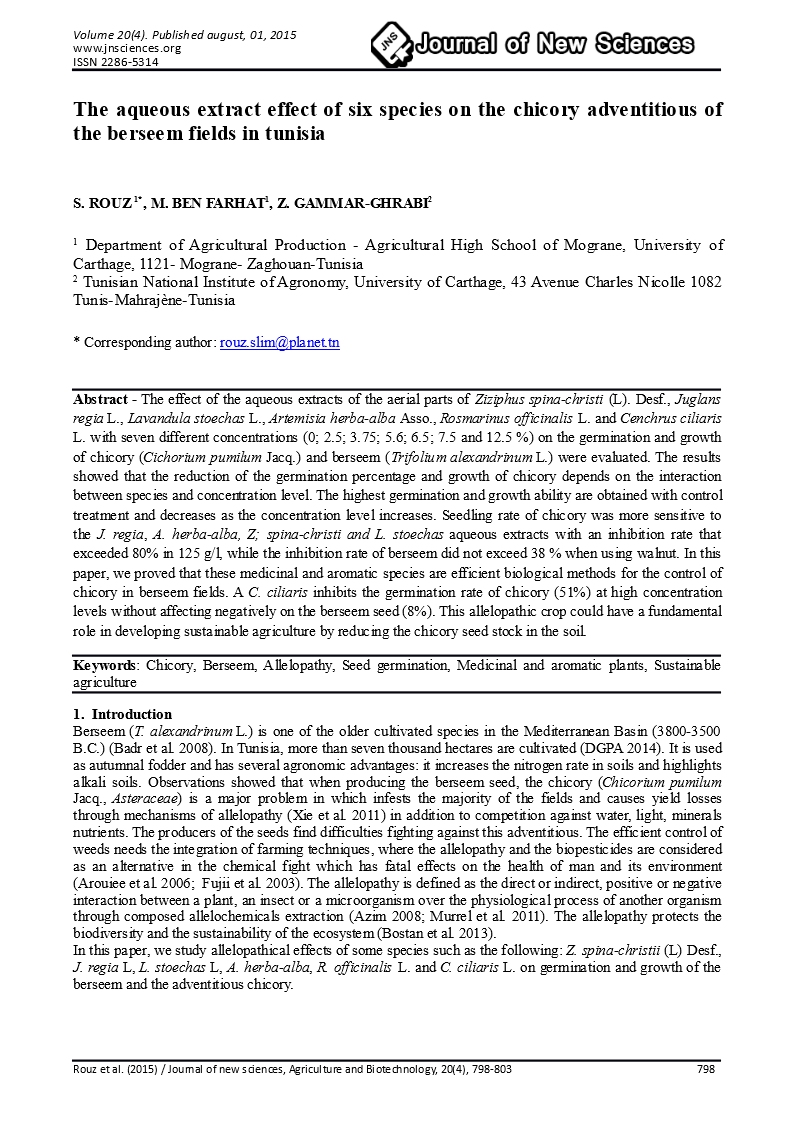 Abstract - The effect of the aqueous extracts of the aerial parts of Ziziphus spina-christi (L). Desf., Juglans regia L., Lavandula stoechas L., Artemisia herba-alba Asso., Rosmarinus officinalis L. and Cenchrus ciliaris L. with seven different concentrations (0; 2.5; 3.75; 5.6; 6.5; 7.5 and 12.5 %) on the germination and growth of chicory (Cichorium pumilum Jacq.) and berseem (Trifolium alexandrinum L.) were evaluated. The results showed that the reduction of the germination percentage and growth of chicory depends on the interaction between species and concentration level. The highest germination and growth ability are obtained with control treatment and decreases as the concentration level increases. Seedling rate of chicory was more sensitive to the J. regia, A. herba-alba, Z; spina-christi and L. stoechas aqueous extracts with an inhibition rate that exceeded 80% in 125 g/l, while the inhibition rate of berseem did not exceed 38 % when using walnut. In this paper, we proved that these medicinal and aromatic species are efficient biological methods for the control of chicory in berseem fields. A C. ciliaris inhibits the germination rate of chicory (51%) at high concentration levels without affecting negatively on the berseem seed (8%). This allelopathic crop could have a fundamental role in developing sustainable agriculture by reducing the chicory seed stock in the soil.

Berseem (T. alexandrinum L.) is one of the older cultivated species in the Mediterranean Basin (3800-3500 B.C.) (Badr et al. 2008). In Tunisia, more than seven thousand hectares are cultivated (DGPA 2014). It is used as autumnal fodder and has several agronomic advantages: it increases the nitrogen rate in soils and highlights alkali soils. Observations showed that when producing the berseem seed, the chicory (Chicorium pumilum Jacq., Asteraceae) is a major problem in which infests the majority of the fields and causes yield losses through mechanisms of allelopathy (Xie et al. 2011) in addition to competition against water, light, minerals nutrients. The producers of the seeds find difficulties fighting against this adventitious. The efficient control of weeds needs the integration of farming techniques, where the allelopathy and the biopesticides are considered as an alternative in the chemical fight which has fatal effects on the health of man and its environment (Arouiee et al. 2006; Fujii et al. 2003). The allelopathy is defined as the direct or indirect, positive or negative interaction between a plant, an insect or a microorganism over the physiological process of another organism through composed allelochemicals extraction (Azim 2008; Murrel et al. 2011). The allelopathy protects the biodiversity and the sustainability of the ecosystem (Bostan et al. 2013).

In this paper, we study allelopathical effects of some species such as the following: Z. spina-christii (L) Desf., J. regia L, L. stoechas L, A. herba-alba, R. officinalis L. and C. ciliaris L. on germination and growth of the berseem and the adventitious chicory.

Five medicinal and aromatic plants and one perennial fodder and pastoral grass have been used. The origin of plant material and the names of species collected during spring 2014 from different bioclimatic zone in Tunisia are illustrated in Table 1. Seeds of T. alexandrinum and C. pumilum were obtained from the Tunisian National Gene Bank.

a Bioclimatic zones are defined according to Emberger’s (1966) coefficient: SASW semi-arid at soft winter, H humid

Total phenolics were determined with Folin-Ciocalteu assay as per the Singleton et al. (1999) method which was slightly modified by Deawanto et al. (2002). The results are obtained using a UV/Vis Jenway-6300 spectrophotometer (United Kingdom) under 760 nm. The total phenolics content was expressed as milligrams of Gallic acid equivalents per gram of dry matter (mg GAE/g DM) through the calibration curve of Gallic acid. The sample was analyzed in three replications

Flavonoids contents were determined as per aluminium trichloride colorimetric method according to the protocol Yi and al. (2007). The absorbance is read at 430 nm using a UV/Vis Jenway-6300 spectrophotometer. Total flavonoids were expressed in milligrams quercetin equivalents per gram of dry matter (mg QE/g DM) through the calibration curve of quercetin. All measurements were repeated three times for accuracy and reliability.

The aqueous extracts of the leaves were prepared by weighing 2.5; 3.75; 6.25; 7.5 and 12.5g of vegetable powder in 100 ml distilled water for a 24 hour period under room temperature. The mixture was filtered and the extracts were collected and stored at 5 °C in the dark until use. Germination tests are carried out in order to assess the allelopathic effect of aqueous extracts. The target plant seeds were surface-sterilized with 15% sodium hypochlorite for 10 minutes and rinsed many times with distilled water. In each sterile Petri dish (90 mm dia.) lined with two filter paper (Whatman number 2), 25 seeds of test plant were sown. Two ml of each solution were added to each Petri dish thereafter closed with Parafilm (Neenah, Wisconsin, USA) to prevent contamination and the loss of moisture. It is then placed in a growth chamber at 20 °C and a photoperiod of 16 hours. After seven days, the number of germinated seeds was recorded and the radicle length was measured. For each treatment, three replications were performed and hence the percentage of seed germination for each Petri dish is determined. Data were analyzed by a Plabstat software (Utz 1991), and followed by mean comparison by the LSD test.

The total polyphenol content varies from one species to another. The leaves of the walnut (J. regia) presented the highest total polyphenol (43.41 mg GAE/g DM) while C. ciliaris is the lowest one (19.80 mg GAE/g DM) (Table 2). The variations are probably due to the genetic characteristics of the species and by the environmental conditions in which the plants are found. These results corroborate with those obtained by Bettaieb et al. (2012); Hadacek (2002); Miliauskas et al. (2004); Ebrahimi et al. (2008); Andarwulan et al. (2010).

Indeed, the increase in the biosynthesis and accumulation of phenolic compounds occurs frequently in plant tissue in response to biotic and abiotic stresses. These compounds are involved in the defense against reactive oxygen species (ROS), which are inevitably produced when the aerobic metabolism or photosynthetic is weakened by environmental stress. Genetic factors and growth conditions of the plant can also play an important role in the formation of secondary metabolites, including phenolic acids (Islam et al. 2003; Hashempour et al. 2010). Other factors especially the extraction method and the quantification method may also influence the estimate of the content of total phenols (Lee et al. 2003).

It has been proven that the contents of total phenols and flavonoids are high. The difference in the phenolic content including flavonoids described in the literature can be attributed to several factors such as the extraction method and the quantification method. Moreover, variables such as temperature, humidity and light intensity, added to the effects of the biota and the physiochemical structure of the soil can affect not only the production of secondary metabolites but also the chemical structure of substances (Reigosa et al. 2013).

3.3.1 Effect of aqueous extracts on germination

Statistical analysis shows that the interaction species x concentration has a significant effect (P˂0.01) on chicory and berseem seed germination (Table 4 and 5).

For both target species (chicory and berseem), the highest germination was obtained for the control and inhibition of germination, which increases by elevating the concentration of aqueous extracts. The concentration of 12.5% gives the lowest germination for both species with a respective average chicory and berseem of 24.67% and 78%. This shows that the extracts reduce the germination percentage of chicory seeds without affecting the berseem. J. regia and A. herba-alba at a concentration of 12.5%, providing the lowest germination of the target chicory seeds with 6.67% and 14.67% respectively. These results confirm the herbicidal properties of these two medicinal species of chicory containing natural molecules like juglone and artemisin that affect membrane permeability, water balance and osmotic regulation (Sanchez-Moreiras et al. 2008).

3.3.2. Effect of aqueous extracts on growth

Tables 6 and 7 show that interaction between level of concentration of aqueous extracts and species decrease significantly the roots growth. T. alexandrinum L. proved somewhat more tolerant as chicory with a respective length of the roots of 2.71 and 1.53 cm.

These results show that the aqueous extracts of the six species studied have allelopathic potential and significantly inhibit the germination and growth of chicory. These excerpts are provided with a potent cytotoxic activity. Root growth is more sensitive to different concentrations of aqueous extracts of six medicinal species than germination. Turk and Tawaha (2002) concluded that the aqueous extracts of allelopathic plants generally act on root growth rather than growth of the hypocotyl. This was explained by the fall, which made the roots in contact with the first allelochemicals inhibit cell division in meristematic tissues (Ashrafi et al. 2008). Mitosis is the most important event in the heart of growth and development of the plant and many enzymes and regulatory factors of these phenomena are affected by allelochemicals via a chromosome aberration (Turker et al. 2008). Thus, the aqueous extract can affect the absorption of water by the seed and delay the mobilization of reserves (Kato-Noguchi and Macias 2006). Even if the seed happens to germinate, we recorded a blocking root growth and / or the aerial part of plants. Tucker et al. (2008) reports that the growth phenomenon is more sensitive to the phytotoxic allelochemicals than germination. So the exact identity of the compounds responsible for this apparent phytotoxic activity, and quantified with certainty needs to be known. Overall, the observed results could form the basis for further investigations of the biological properties of aqueous extracts of six medicinal species. In addition, the use of these aqueous extracts as a biopesticide is a promising path towards recovery of this fraction.

This study demonstrated that allelopathic potential of aqueous extracts of five medicinal species and one perennial forage and invasive grass by influencing either the germination or growth are the two phenomena that target both species. This indicates that these extracts are rich in natural bioactive substances, suggesting that their importance in the development of natural bioherbicides as an alternative to minimize the release of synthetic non-degradable molecules in crop production. Further studies are needed to understand the mode of action of these allelochemicals. Also a separation, purification and identification of bioactive molecules that could potentially be used as herbicides or as plant growth regulators would be need to be recorded for further study.

Bettaieb A, Moujahed N, Ksouri R (2012) Secondary coumpounds characterization in some autochtonous species from a Northern-Eastern region of Tunisia. Options Méditerranéennes New approaches for grassland research in a contentext of climate and socio-economic changes 102:371-374

Turk MA, Tawaha AM (2002) Inhibitory effects of aqueous extract of barely on germination and growth of lentil. Pakistan journal of Agronomy 1: 28-30

Yi ZB, Yu Y, Liang YZ, Zeng B (2007) In vitro antioxidant and antimicrobial activities of the extract of Pericarpium citri Reticulatae of a new Citrus cultivar and its main flavonoids, LWT-Food Science and Technology 4: 1000-1016